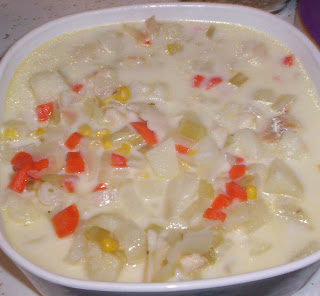 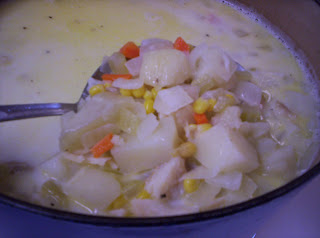 If you're looking for thick, white, gravy-like fish chowder, this isn't it. While I've personally never understood the appeal of New England style chowders, there are a heck of a lot of people who do. Bully for them.

This fish chowder is much, much thinner in the liquid, leaving the substantial part of the meal to the fish and vegetables. If you're really hell-bent on having thick chowder, you can remove a cup of the fish stock, cool it slightly and stir-in a few tablespoons of flour. Then, slowly add it back. I realise we all have our food stumbling blocks and if you need your chowder creamy (or your oatmeal salty, or your apple pie with cheese) then who am I to criticise. I will however, try to convince you to at least try the less gloppy version I'm offering here.

Two days prior to cooking, begin soaking the salt cod in a bowl in the fridge. Change the water at least three times a day.

In a large stock pot, saute the onions, carrots and potatoes in a bit of oil or butter (or both). Add the hot water and cover. Cook over medium heat until the potatoes are soft (about 15-20 minutes).

Wash the cod and cut into large chunks. Add to another pot and cover with the boiling water. Place a lid on the pot and cook for about fifteen minutes over very slow heat. The worst thing you can do is overcook it, so a bit under is going to be much, much better than rubbery cod.

Remove the fish from the heat. Drain, reserving liquid. Add the fish to the chowder. Add the milk and cream, the add as much stock as needed (about 2-3 ladles). Adjust salt and pepper. Stir in the butter and taste again, adding additional butter and cream to enrich as needed.

Bring back to a simmer until heated through. Serve warm Brewis optional (Oh for heaven's sake I'm kidding-even if you wanted hardtack, where on earth would you find it?).
Posted by Goody at 2:48 PM
Labels: Chowder, Salt Cod