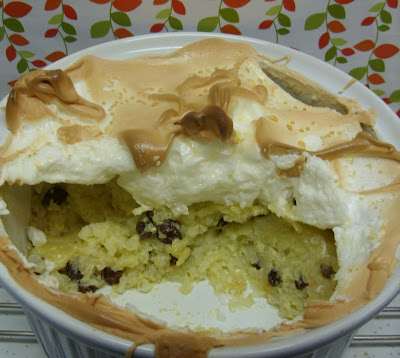 Hey everybody, it was -20 F. here this morning. Actual temperature-no idea what the windchill is.

We were divided on this one. Danny hated it, which is strange because he likes custard, nutmeg and meringue. Mr. ETB thought it was good, but not something he'd crave. I can't really eat this sort of thing, but I did have a small taste, and I thought they were both crazy-had I been able to, I'd have devoured a large bowl of it.

The recipe came from the Paula Deen cookbook Mr. ETB bought me for Christmas. Her recipes are all over the web, and at the Food Network if you really want to make it. The recipe is quite basic and I think were I to make it again (which I probably won't) I'd add cardamom or cinnamon to the spices. You could even go with cardamom and rosewater. I'd probably skip the meringue as well.
Posted by Goody at 6:40 AM
Labels: Pudding, Rice, Southern Food