Quisp and Other Cereal (Serial) Flashers 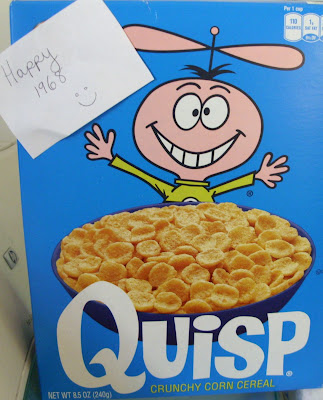 I doubt very much that Mr. ETB will even open the box to try any, but when I saw Quisp had been reintroduced onto the market, nostalgia got the better of me, and I bought it. He's so difficult to buy presents for, but who wouldn't want a box of sugary cereal with a nose-less, propeller-headed space alien on the front? Right.

We went back to the farm store today to watch baby chicks and ducks again. They had turkeys in as well, but I've lived in the country long enough to know that turkeys are mean sons of bitches. Oh yes they are. Belligerent, aggressive, destructive-there's a wild flock that live on the S-curve out of town and woe to the unsuspecting motorist taking that blind curve at anything over 30 MPH. Turkeys ain't nothing nice. Consider yourselves warned. Ducks on the other hand are lovely, and their eggs are wonderful. If you don't have enough cash on hand to by one you can always put it on their bill. You can groan at that, I won't be insulted.

Something began rooting out my garlic bulbs, so I'm not expecting much of a crop this year. I must have planted fifty, and so far I've found about fifteen partially sprouted cloves dug up around the garden. Hopefully some will make it. I'll toss on some more dirt, and hope for the best.

Have you ever heard of an Abe Lincoln tomato? Neither have I, but we're growing them this year. I've been a bit more selective with the tomatoes these past few years as I always end up with more than I want, and you can only preserve so much chutney. Danny gets his own patch of garden this year, and has taken great care selecting varieties of seed that do well in our climate, and considering cross pollination. In an ideal situation, I could hand off all the difficult work to Danny, who will consider it all great fun, and I can sit in the shade reading all summer. I don't really believe this will happen, but I find it preferable to the reality that I'll likely end up tending both gardens.

On the way home this afternoon, we stopped at the park. A grandfather was there with his two granddaughters, maybe two and four at the oldest. The older girl was fascinated by Danny, and kept following him around. Danny, trying to be polite (as she was younger) kept stepping out of the way to let her go down the slide first, or climb past him, but she returned, running right back to stare at him, too shy to talk. Poor kiddo was exasperated by all of this, declaring that, "Small children shouldn't be permitted on playgrounds as they don't know how to play properly." I could nearly believe in reincarnation listening to that outburst, as I observed my son morphing into my Gran. I'm still somewhere between pleased and horrified.

This was also the week my son came up with his first slightly off colour joke. He read in the newspaper about a "serial flasher" in Lincoln. The apartment complex was called (not making this up) The View. Anyway, Danny was amused by the fact that the flasher was providing himself better lighting with his mobile phone, and remarked, "He must have wanted to make sure she could see his Grape Nuts! Get it? "Serial flasher."