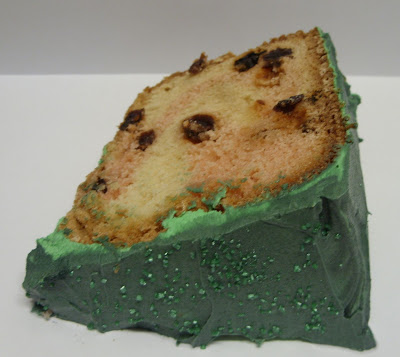 I bought my copy of Delores Casella's, A World of Baking at the retired teacher's yearly booksale in Lincoln, Nebraska. Because it was the last day of the event, I took advantage of the bag sale, and bought anything that looked interesting. I found it tucked away in a bookcase last evening, and thought it was about time to bake something from this interesting little cookbook.

Reviews on the web sounded encouraging, so I set aside my reservations reading through the recipe. Though the book was published in 1968, many of the recipes are much, much older. This cake was from the "historic" section and as I struggled to fold the egg whites into the heavy, dough-like white batter, I gained a greater appreciation for the upper body strength of 19th Century women baking without the assistance of electric hand mixers. Even with the mixer, this cake was a workout.

The two different batters mean you are basically making two cakes. I would have been irked by this, except that one cake made use of the whites, and the other the yolks. That had me less irritated. I won't lie, this cake takes effort, and while I didn't think the result was worth it, the cake was devoured amid praise (between mouthfuls of cake, of course) from the boys. The recipe did not suggest a frosting, so I resorted to a butter/shortening mixture with icing sugar as I knew it would stand up well in warm weather.

I should have made the pink batter deeper in hue. It barely stands out, and unfortunately, it is difficult to see the distinct layers as they also blended a bit (I followed the instructions to spoon the batter on rather than pour, but eh, whatever). Currants might have sunk less than raisins (to look like watermelon seeds), but overall with a bit of imagination I suppose you can see where it is meant to resemble a watermelon. OK, maybe one of the really deformed watermelons you sometimes get if they grow against a rock or something. Fine, it isn't a pretty cake, but it is flavoured with rosewater and vanilla and heavy as it is, my family liked it. Old fashioned cakes do tend to be a bit on the heavy side, and I may have overbaked it ever so slightly, but at worst, I can always scrape the frosting off when it goes stale and make a trifle. I don't think it will get a chance to go stale. Me? I would have binned it after the first bite, but I'm probably not a good judge of cake-I just bake the bloody things.

For the White Cake:

First make the white cake:
Sift the flour with the bicarb. Cream the butter and sugar until light. Add dry ingredients alternating with the buttermilk. Beat egg whites until stiff. Fold into batter along with vanilla extract. Set aside.

For the pink mixture, sift the flour and bicarb. Cream butter with sugar until loght. Beat in egg yolks. Add flour alternating with buttermilk. Beat in food colouring and rose water. Fold in raisins.

Bake about an hour (mine took almost an hour and twenty minutes) or until cake tests done with a toothpick. Cool 10 minutes in pan, then remove and cool on a rack.

I frosted mine green which I thought would look cool against the pink and white, except that the pink didn't show up, so now it looks like a funny green/grey cake. I do think I got the colour of a watermelon rind pretty accurate but the overall effect was kind of a disappointment.
Posted by Goody at 7:14 PM
Labels: A World of Baking, Cakes, Vintage Recipes