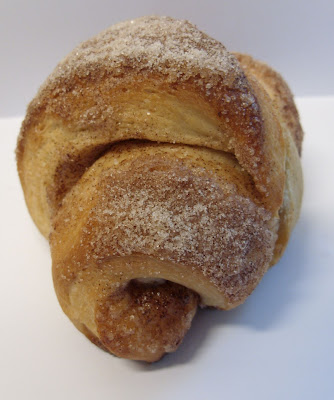 I've been trying to recreate this pastry of my youth (split three ways of course, so no one got fat ...well, Dad did because he got his own cinnamon roll) with only moderate success for at least thirty years. Today, I improvised and while it isn't what I'd call a "Chicago sour cream roll", it is pretty darn close. I'm not going to ration them out in small wedges as I'm not after authenticity in that way. I swear to god, growing up was like the Jerry Springer Show...day in and day out-I really ought to be more screwed-up.

Right, the rolls then. They're lovely, no? Would you believe I was inspired to make them because I had half a cup of sour cream nearing the expiration date? I mean, that's logical-use a stick of butter (OK stick and a half with the filling) eggs, milk, and flour just to avoid tossing out some sour cream? Maybe I didn't escape my childhood as unscathed as I think. None of that matters of course, because I now have thirty cinnamon rolls to fill my freezer for quick on-the-go breakfasts, or when it gets too hot to bake (it will, oh it will-we're just being spoiled right now).

Dissolve yeast in milk and butter in a large bowl. Mix in sugar, salt, sour cream and eggs Mix well. With a wooden spoon, mix in the flour until you can no longer stir, then use your hand to mix adding only enough flour to make the dough manageable without sticking-if you add too much flour it will be dry. Amounts needed will vary by brand, humidity, etc.

When kneaded until smooth, place in a large, buttered bowl and let rise until doubled-about two hours as the dough is quite rich. Punch down, let rise another 45 minutes.

Divide dough in half. Roll each into a circle that is about 1/2 inch thick. Smear each round with about 2 tablespoons soft, not melted butter. Top with cinnamon sugar to taste (I went a bit generous with it, but no one has complained). Cut each round into segments as for crescent rolls (it is up to you how large to make them for your needs). Roll up from the wide end and place on a well-greased baking sheet point under. I needed three large baking sheets. Cover lightly and let rise another 30 minutes while the oven preheats to 375 degrees F.

Bake 10 minutes, then rotate pans and bake another ten. At this point, check for doneness(spell-check says "doneness" isn't a word...fuck spell check. You go on and check for donness because if you don't your buns will be burned or undercooked and spell check won't be there to console you) as it will vary depending on how large they are. Cool on racks.

Eat your rolls whilst telling Spell Check what it can do to itself, because you checked for donness. Yes you did.
Posted by Goody at 1:40 PM
Labels: Chicago, Cinnamon, Egg Bread, Rolls, Sweet Rolls, Yeast Bread

Are you sure you mean sour cream and not cream cheese? Sour cream doesn't sound like it'd be very tasty in a pastry, whereas cream cheese is often used in pastries.

Yep, sour cream. It is a rather popular ingredient in pastry, so perhaps this would be a good introduction . I would caution you to use the real stuff, as the low fat will be watery.