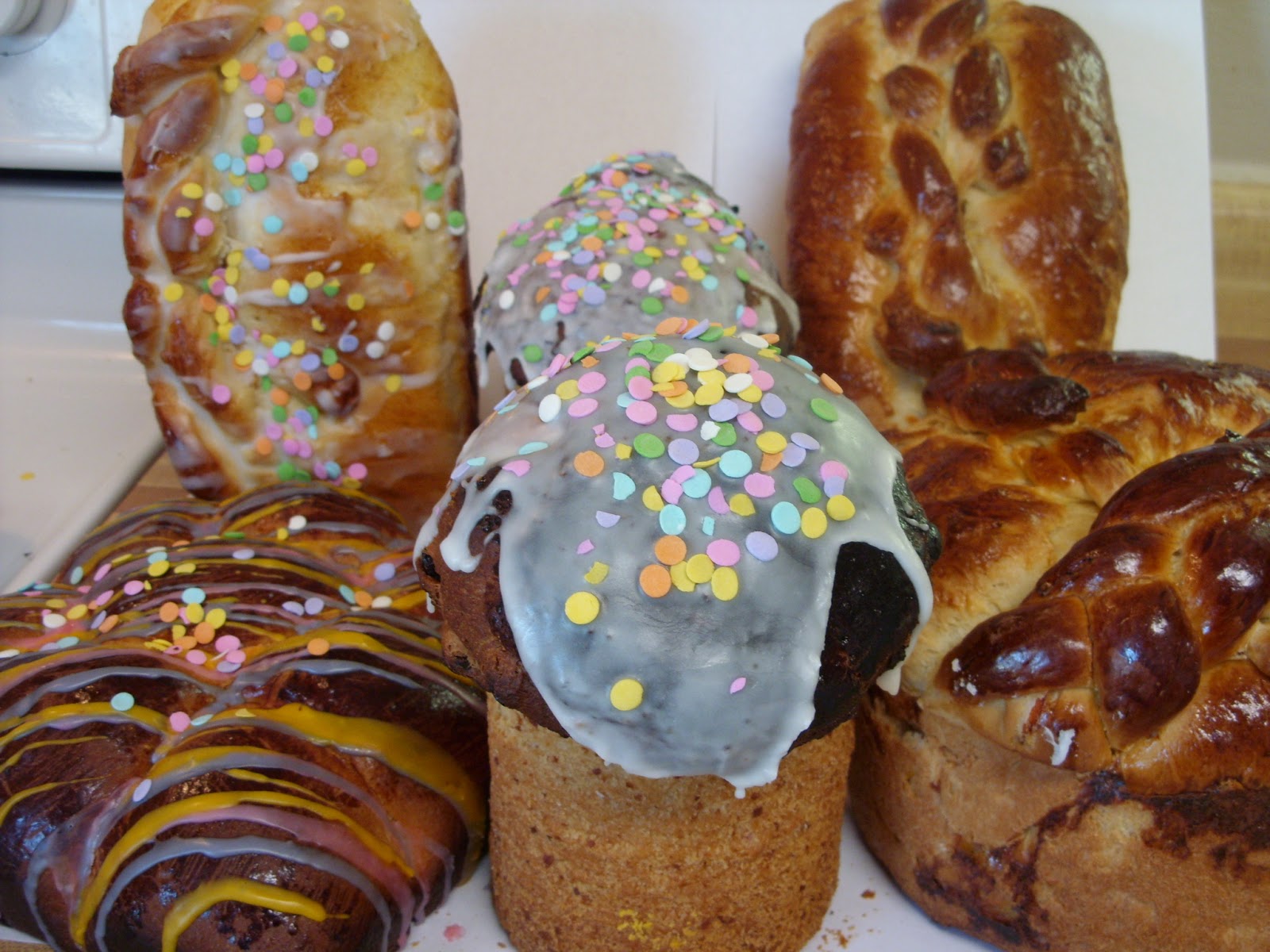 I don't recommend doing both breads on the same day (not that I take my own advice) but it is doable. I started early with the kulich which took longer to rise. The biggest challenge was finding something to bake the kulich in, as many tins are now lined with some sort of vinyl making it unsuitable for the oven. I finally tried two large tins of fruit cocktail, and they were thankfully unlined. That does give me an excuse to try making that vintage favourite from the early days of freezers-frozen fruit cocktail salad. I guess that's what I'll be doing tomorrow. Today, I baked the hell out of this place. I can't remember the last time I had so much going on in the kitchen at once, or when it smelled as wonderful as it did when these suckers hit the oven. 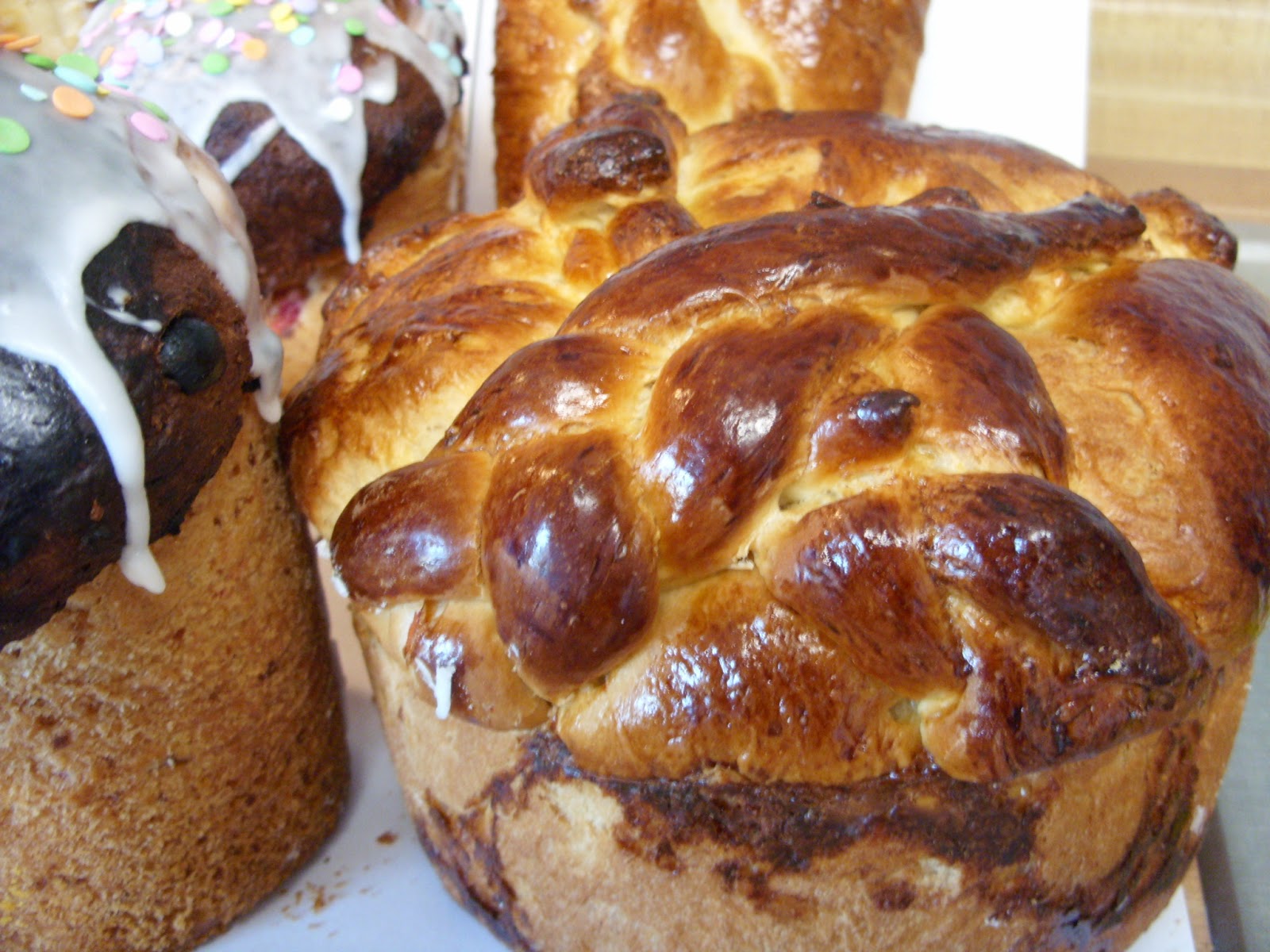 The uniced loaves are paska. You can of course ice it, and we did coat one loaf pretty generously, but it is such a pretty bread it seems a shame to hide it under all that sugar. I made braided designs for the top. They promptly came undone in the oven, but no matter, they still look pretty (the one that didn't look pretty got the icing-see? Foolproof!). If you put dough designs on top, it helps to secure it with toothpicks as they rise to keep everything in place. In theory. 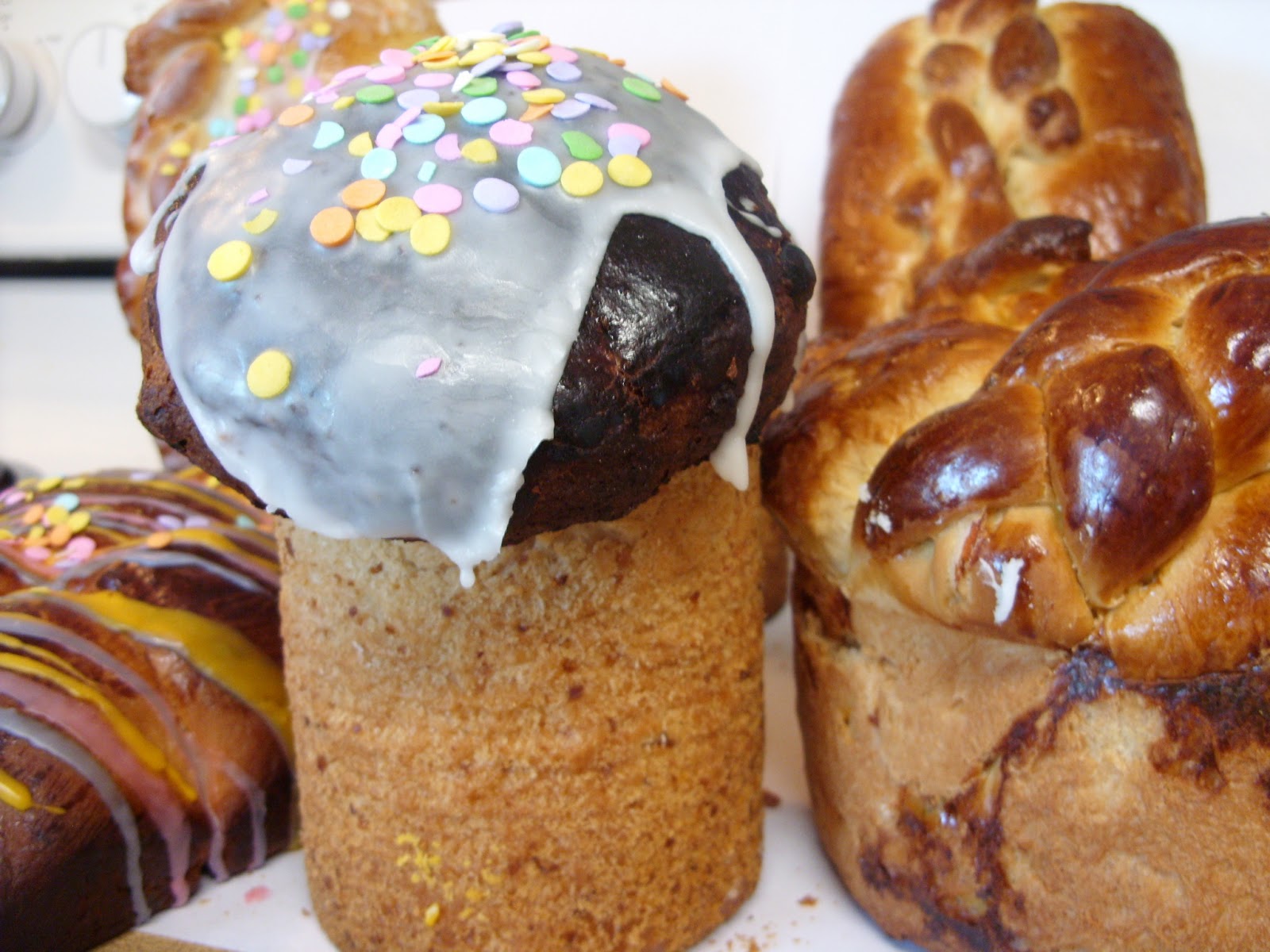 The tall, iced bread is kulich. I also made some rolls from the extra dough which I iced with tinted sugar to resemble Easter eggs. That dough was a pain in the behind from the word go-but it did work without a hitch, so there's something to be said for following the directions. By the point I was placing the bread on its side on a soft pillow (to prevent it collapsing) I knew no matter how wonderfully it turned out, I would not be using this recipe again. Maybe I'll dream about bread tonight.

For the Paska I used the recipe at Mennonite Girls Can Cook. This is the first year I've used this particular recipe (previous ones can be found in the archive) and though I haven't tasted it, it looks and smells great. It was much simpler to do, and didn't require five pounds of flour and two dozen eggs. It still made more than enough bread to give away-which is what we intend to do. You can find the recipe at:
http://www.mennonitegirlscancook.ca/2009/03/paska-lovellas-recipe.html 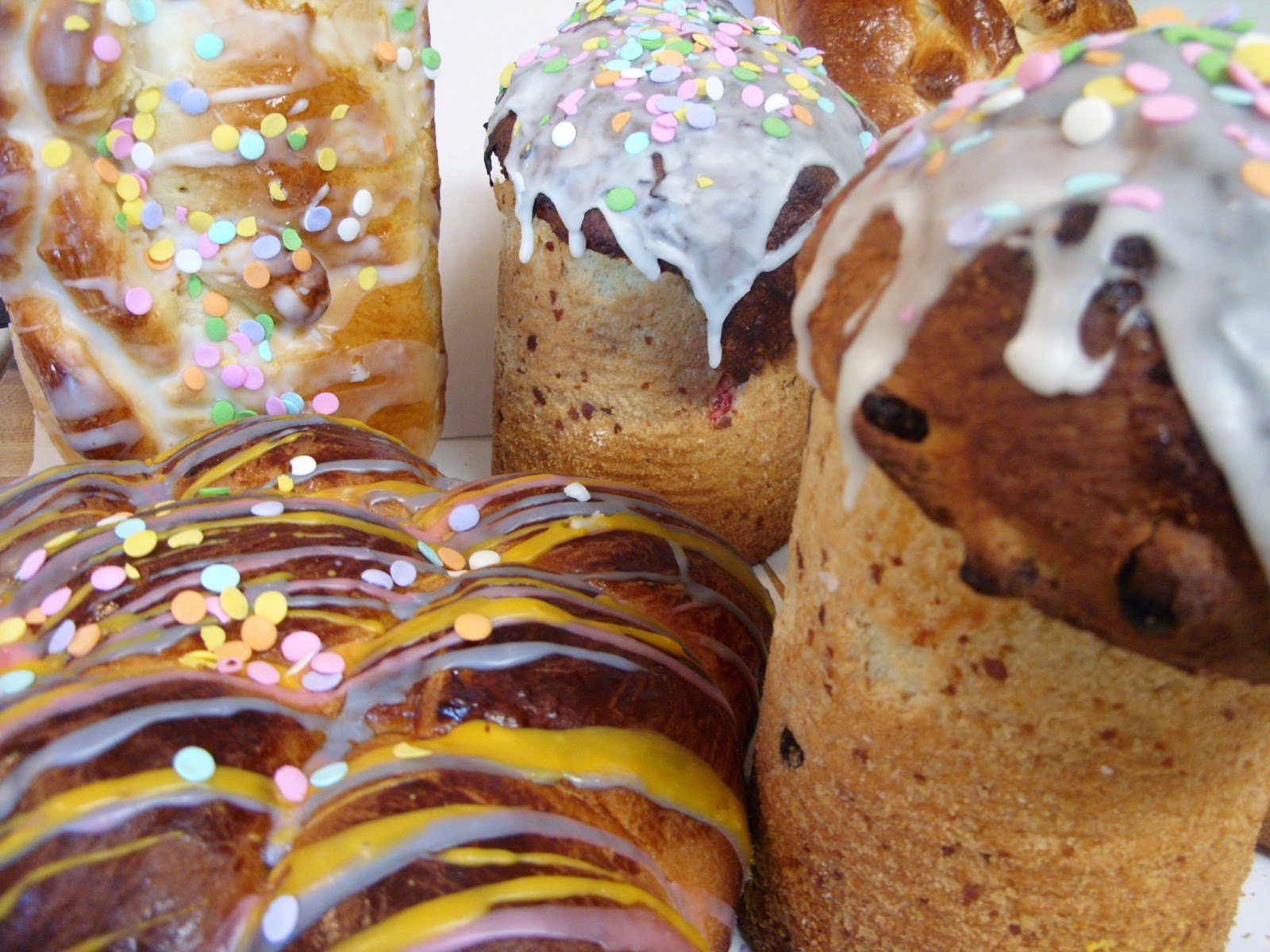 The kulich came from The Art of Russian Cuisine by, Anne Volokh

I feel I should warn you that the recipe assumes the use of a stand mixer. I did this entirely by hand, which was work, but it IS possible. That said, I bake a lot because allergies keep us from purchasing baked goods (cross-contamination, etc.). My point is not to brag, but to say that I am experienced at handling dough that is difficult to manage/very sticky. I also have one hell of a powerful upper left arm! Unless you have a very good mixer, you're going to end up doing at least some of this by hand because once you get past five cups or so of flour and heavy dough, you're asking to strip the gears. You should use the lowest speed with bread dough anyway, but you knew that. This isn't a recipe for a day when you're hurried with other things unless you are exceptionally gifted with time management. The dough rises slowly (due to all the eggs and butter) so build that into your plans for the day. It will take the better part of a day.

The recipe called for either plain flour or instant-blending flour. In the US that is Wondra, and it is quite expensive, and only sold in a canister that contains a scant 3 cups. That said, Wondra is magical stuff, and I can't imagine making a pie crust without it anymore. It will spoil you for cheaper flour, so be warned. I used 3 cups of Wondra, and made up the rest with plain flour. The dough still handled beautifully. It was the silkiest dough I ever worked with, and I'm fairly certain that is due to the Wondra.

Prove the yeast in a bowl with 1 tablespoon flour and 1 tablespoon sugar. Add 6 tablespoons warm water, mix and set in a warm spot until foamy.

In a bowl of an electric mixer (or by hand) beat the egg yolks with the sugar at moderately high speed for a minute. Increase speed (or whisk faster) and continue until it is white-ish, and forms a ribbon. Add the milk slowly, and mix well. Add the salt and 6 1/2 cups of the flour. Knead well for 4 minutes. Add the yeast, and beat at medium speed for 9 minutes stopping twice for 2 minute intervals to let the motor rest (I wouldn't bet on it). Add half the butter, then knead well for several minutes before adding the remaining butter. Let the dough rest for 2 minutes. Touch the dough-if it sticks to your fingers add more flour a small bit at a time. Knead, then let rest 2 minutes.

Butter a large bowl and place the dough in, turning once to coat. Cover with a towel (I used cling film) and let rise until doubled-this can take as long as three hours.

Slide a hand beneath the dough, lift it about an inch over the top of the bowl and drop it back in. Do it again-this will deflate your dough. Cover it again, and let rise another 1 1/2 hours or until it doubles in bulk again.

Butter the bottoms and sides of your baking tins-generously. I'm serious, these will stick, so it is important to really butter them well. Dust the insides with the breadcrumbs, then knock out the excess. Place enough dough in each pan to come 1/2 inch higher than halfway up the sides. Cover lightly to let rise another 20 minutes. Meanwhile, set the oven rack at the second to lowest shelf, and preheat the oven to 350 degrees F. When the dough is 3/4 the way up the pan, make the egg/oil/water glaze and brush it over the tops. Bake 20 minutes, then increase the temperature to 375 degrees F. and bake another 40-50 minutes longer (mine were done in another 25 so watch it).

Place a large pillow on the kitchen counter. Cover it with towels. Remove the kulich carefully from the tin, and lay it on the side. Kulich will collapse if placed on a hard surface, or standing up. After 30 minutes, turn them gently to the other side to continue cooling. When cool, they can be brushed with melted butter and sprinkled with coloured sugar, or you can make an icing. I did not use the cooked icing in the book opting instead for icing sugar and water. This hardens nicely and does not require refrigeration. If you plan to freeze the kulich, don't frost it until you are ready to serve. 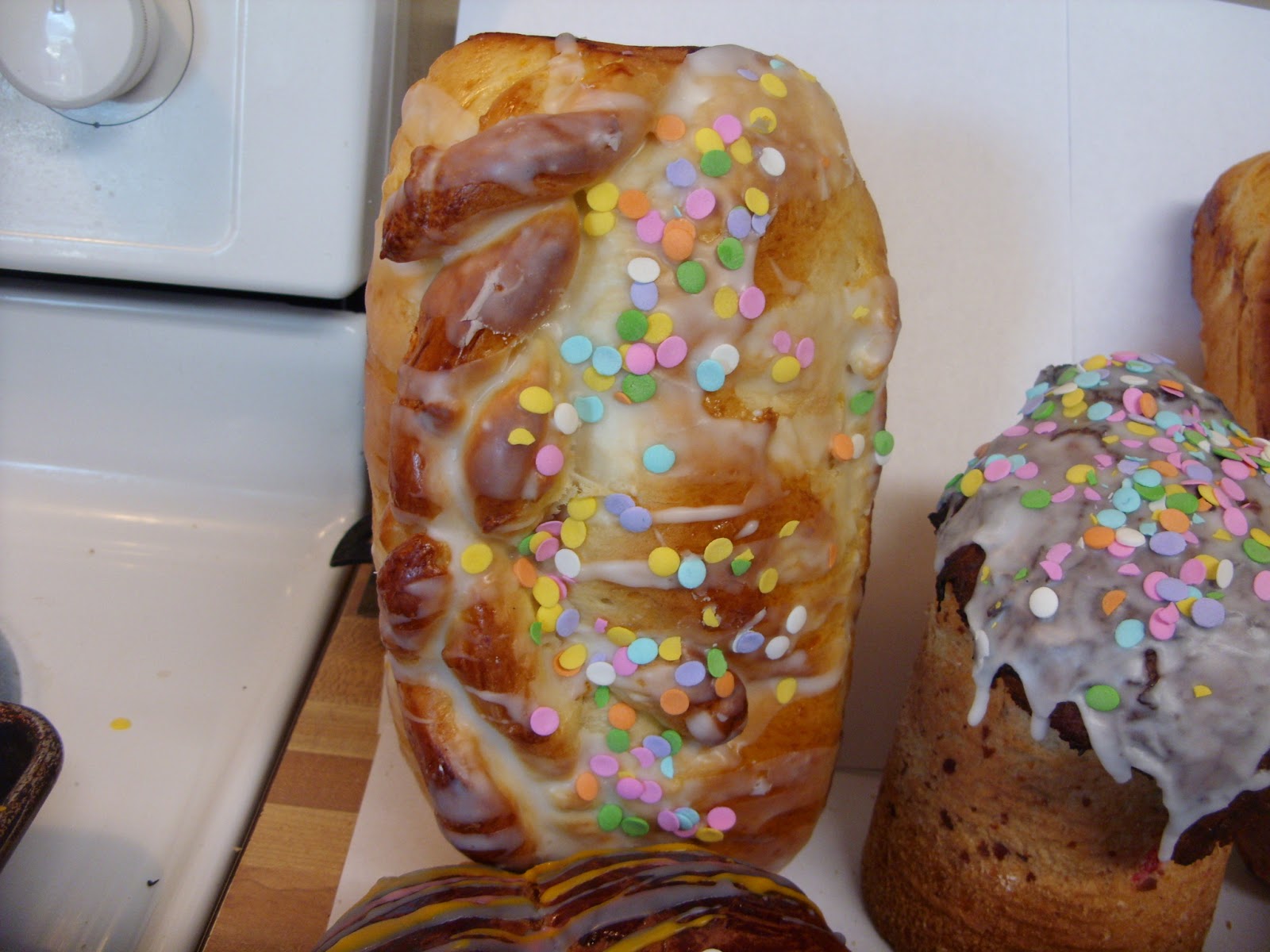 Oh my days, I wish I lived nearby so I could be the recipient of some of your marathon bake giveaways. I promise I will not be doing all that on the one day. Baking respect.

Unlike Christmas cake that can last years, these have a short shelf life, otherwise I really would send you one.