I was so much older then 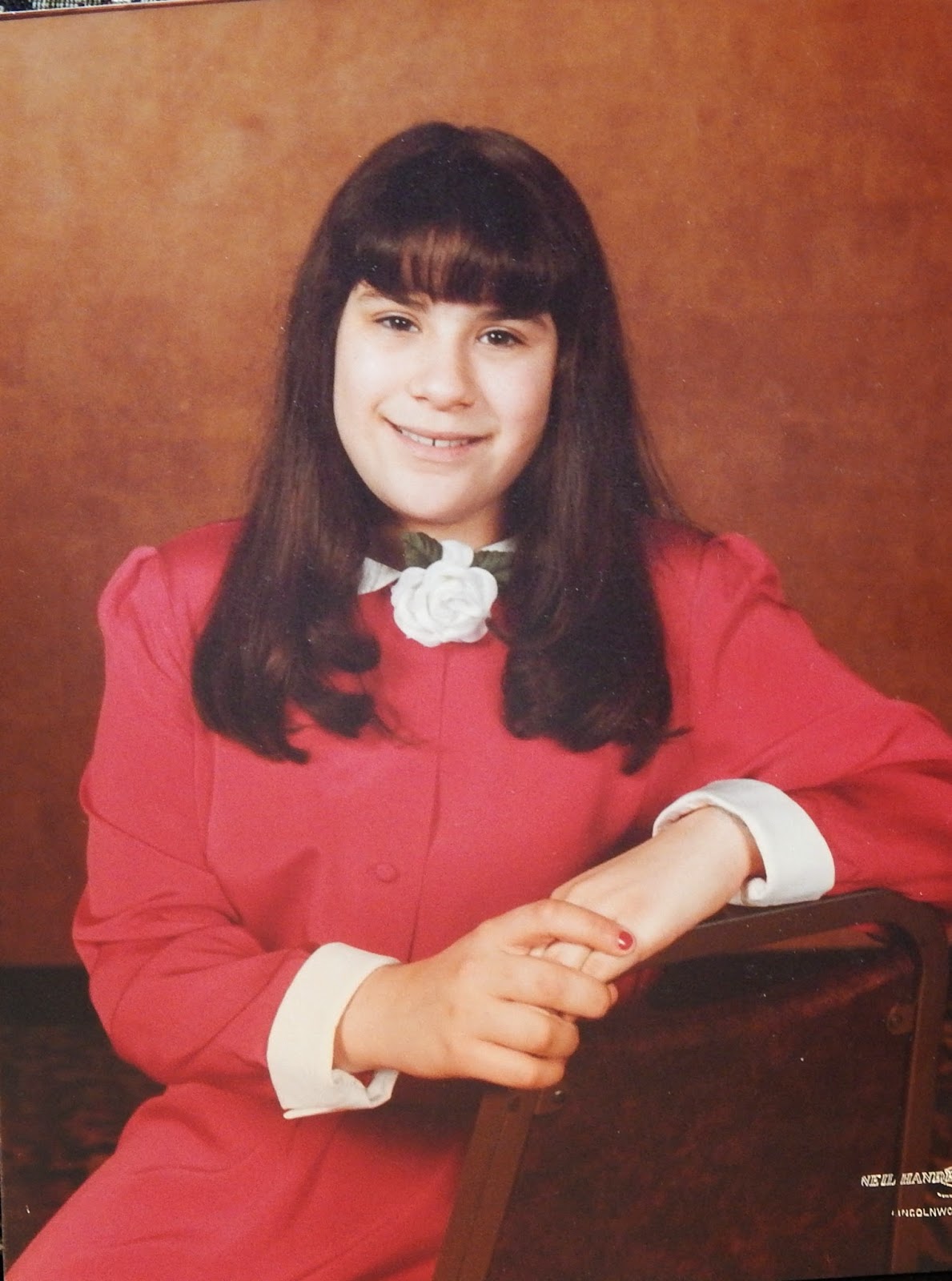 I'm younger than that now. 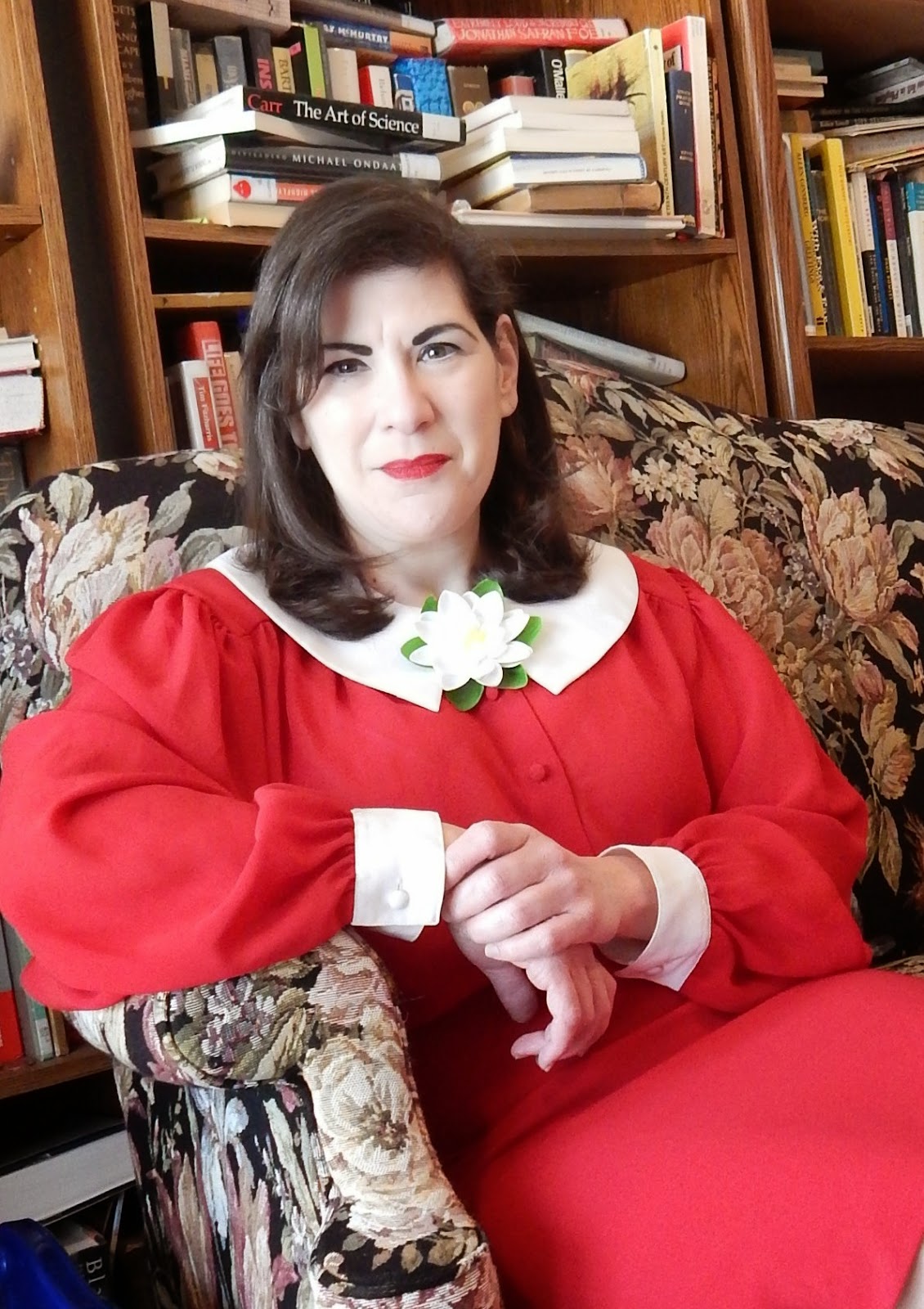 I wouldn't want to be thirteen again, but I wouldn't mind having nice thick hair once more. They posed me with the chair that way to disguise my hips. Nice message to send a teenager. 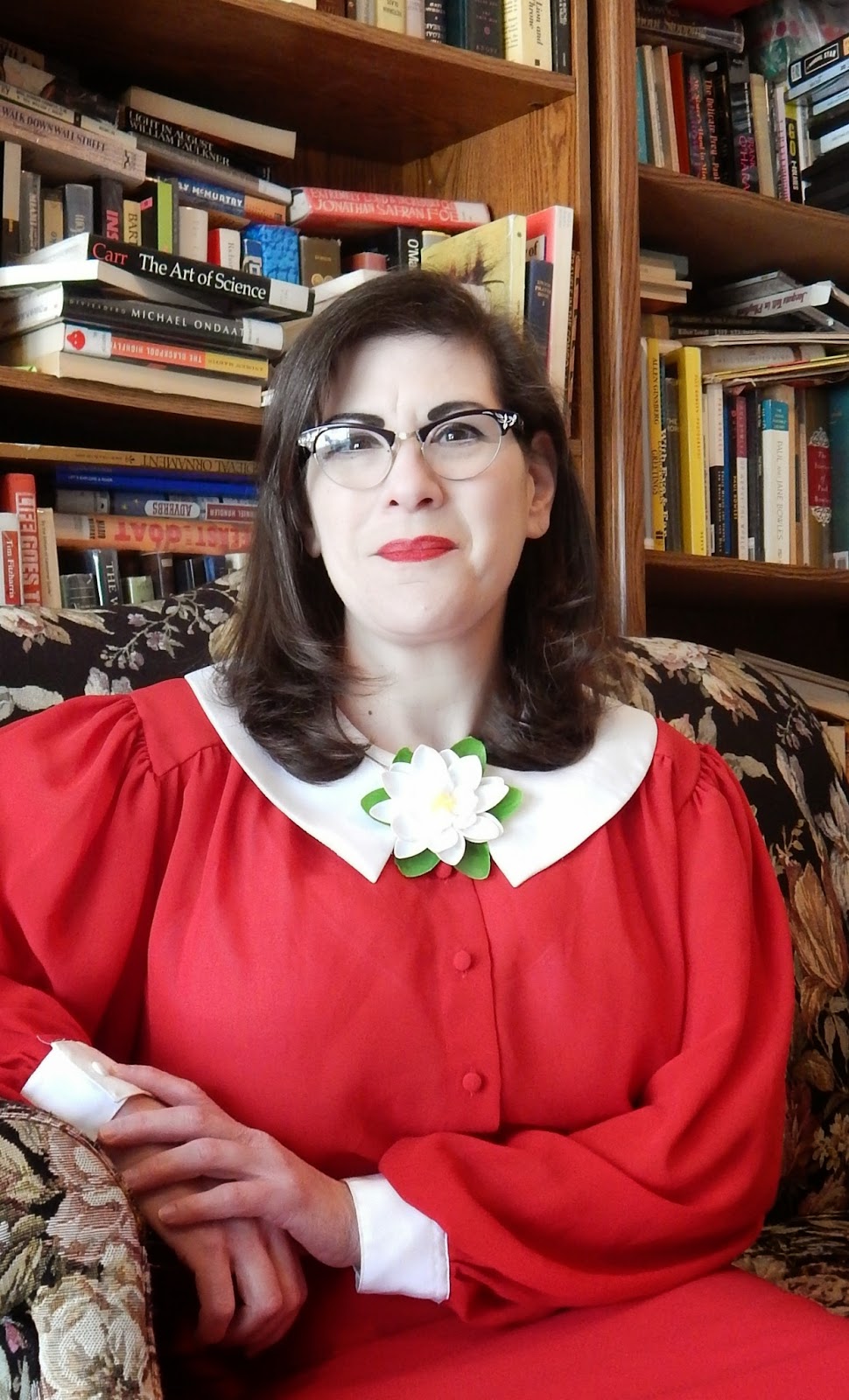 I still don't like how I look in red. Or without specs. My hips? Eh, whatever. 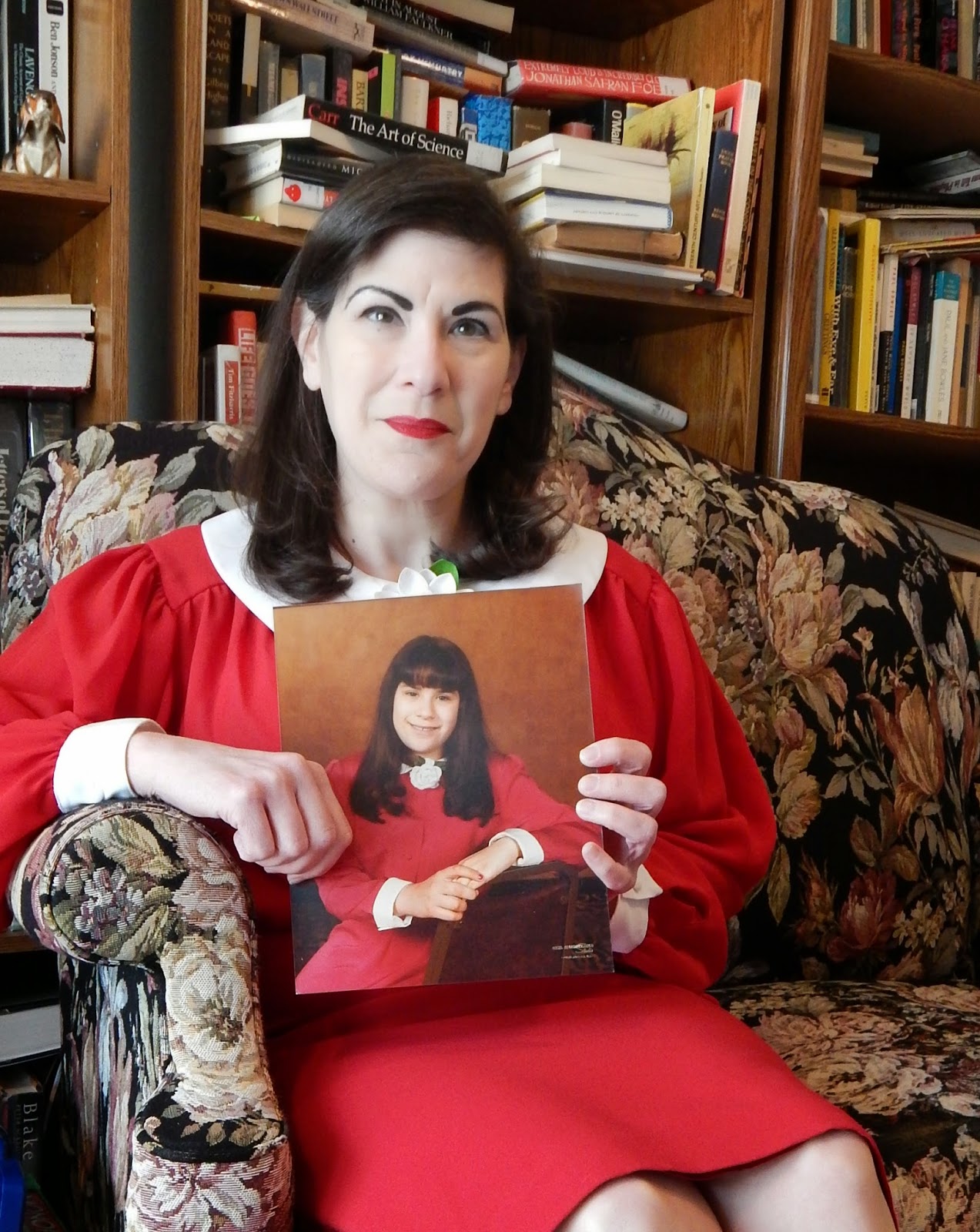 It isn't the same dress. I hacked the sleeves off the original at some point in the early 80's, and gave it a punk makeover with fringe. I still never liked it. It came from the exclusive dress shop, Young in Heart, in Winnetka. Did I mention I hated it? My mother must have lost herself momentarily, and thought she was shopping for Judi. 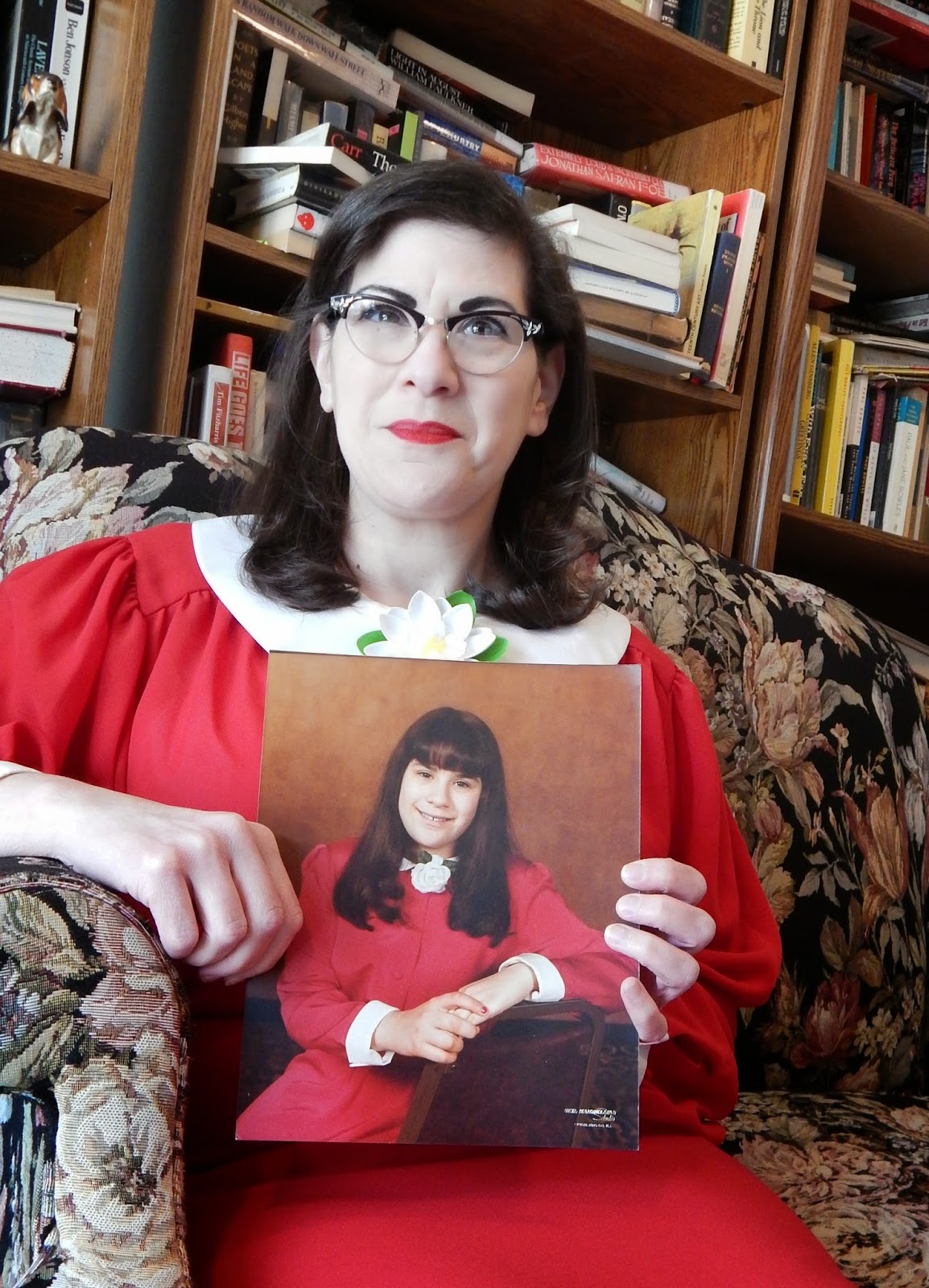 I found this blouse at Goodwill last week. It has gigantic sleeves which don't really show in the photos. It was fun for a lark, but I think it will be going back to Goodwill. 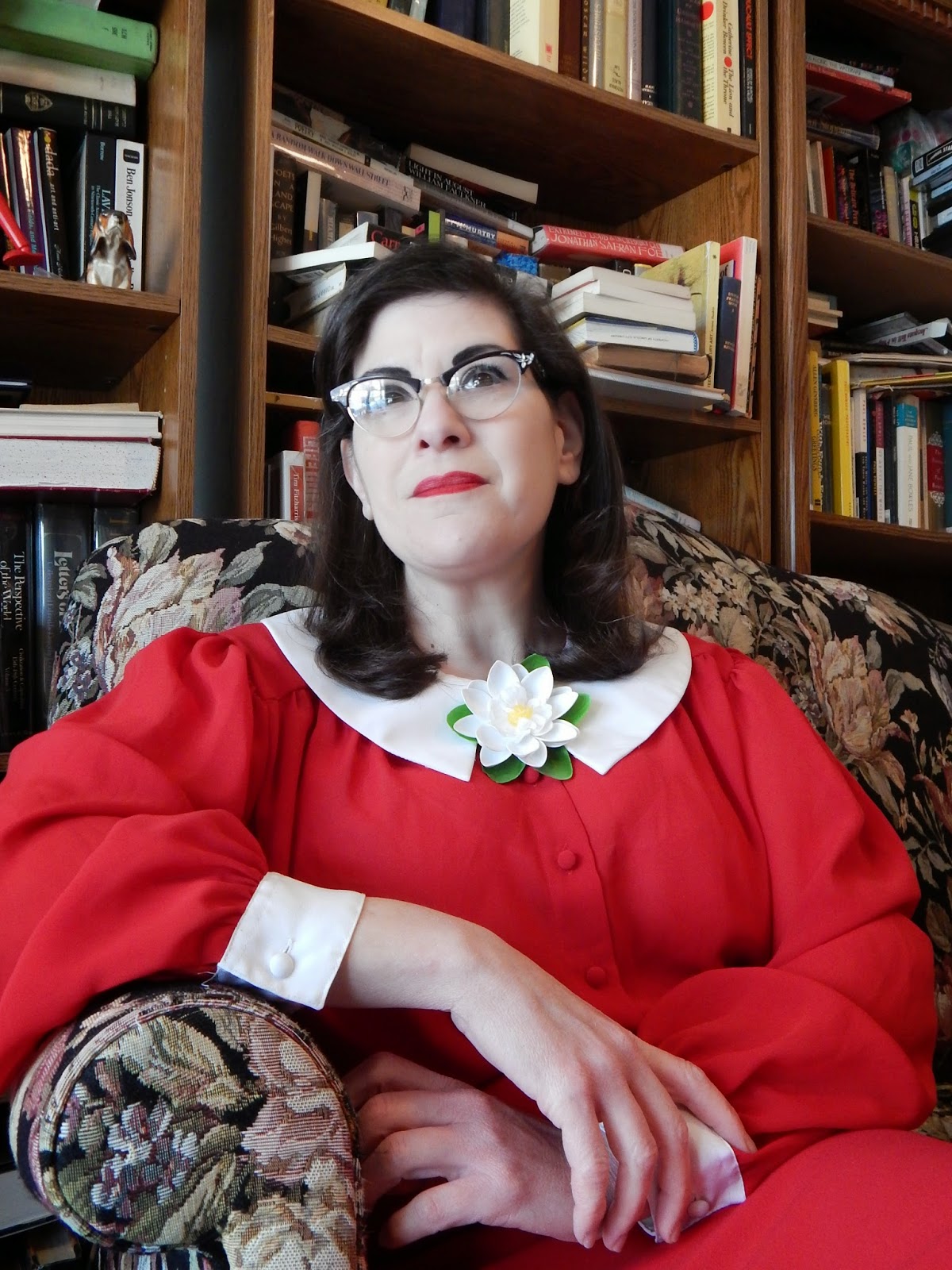 Hope you enjoyed this stroll down memory lane with me. 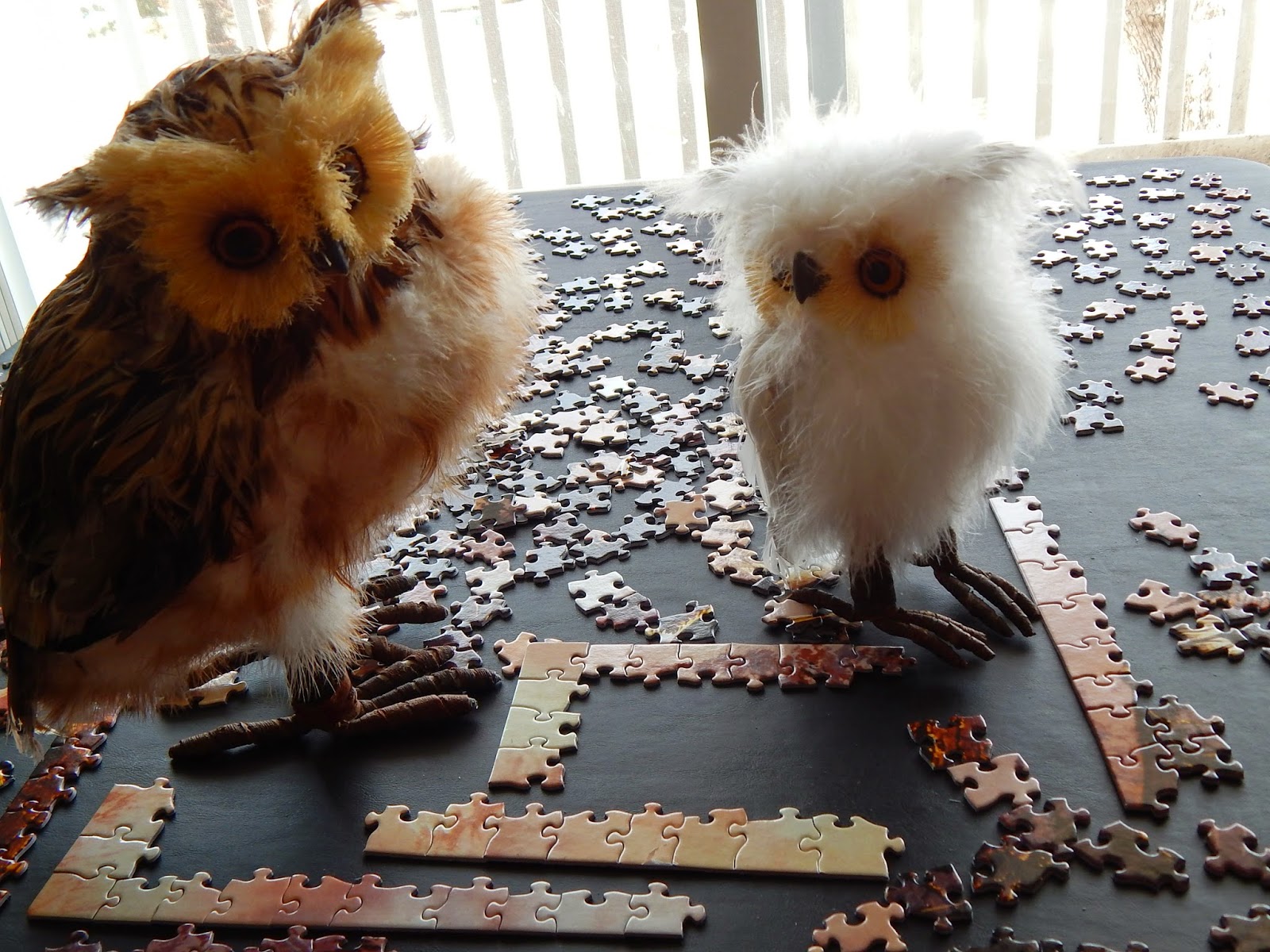 Be getting my hat now...
Posted by Goody at 9:33 AM
Labels: Childhood Memories, family photos, Vintage Clothing, vintage photos

You are sooooo cute. That dress is identical and YES! Wear Red!!! You look very pretty in red. Isn't it crummy how that stuff from childhood stays with us? I won't even start on the list of insecurities that are following me around. Which is why you will never see my ENORMOUS forehead!

That's funny, I was only chatting to Claudia at the weekend about my lack of memories of being 13 (she is 13 this month). It's all a bit vague... But I looked like shit, that much I do know, and I didn't have fabulous hair like you! I still think red is your colour, even if the blouse isn't a forever love. I wouldn't go back to those years either - 50 suddenly doesn't seem so bad when compared with the prospect of being 13 again! xxxx

Is it possible you don't like red/this blouse because you hated the red dress? I inquire simply because you look so pretty and poised wearing the red blouse with its dainty white camelia!

Oh, bless whoever it was that told your 13-year-old self that hips had to be hidden. I'd like to give that young woman bravely facing the camera "despite hips and despised dress" a hug, and swat whoever with my reticule.

But I do know what you mean about having less hair. When I was a teen, I spent time each morning plucking my eyebrows. Now, I peer into the mirror wondering where they went.

@Connie
Bigger head=Bigger brain. Bigger hair on the other hand...

@Curtise
I remember being angry-constantly. I'm sure you looked better than you think you did. Happy early birthday to Claudia. I'm glad I got to be a teen when I did-it seems all so much more complicated today.

@Beth Waltz
I think I hated red because my mother bought *everything* in red for me. From the Hudsons Bay coat (that was met with the daily chant of, "The red coats are coming!") to the Orphan Annie dress, it was all red-all the time. I should count myself fortunate, my sister got the pink treatment.

Yeah, why didn't someone tell us to stop all that tweezing?! Now the only place I can reliably grow hair is my chin.

This is so clever to take the photograph of yourself holding the photograph. I love that! I will agree with you on the point of not wanting to be 13 again. Those are tough years. Girls that age do not see the whole person of who they are or becoming. It's all about the hips, hair, etc. You strike me as a person who isn't shallow and probably never functioned on that level. I love the color red on you. I rarely wear it myself. As I've said before I'm a very boring plain clothing type of gal. I admire the pop and sizzle of your attire!

That's a fun photoshoot. And such nice, thick hair! Mine was limp and thin.

Being a teenager sucked bigtime. I can't actually remember much of what I wore back then - probably a blessing! Definitely not red, though.

I thought wow you can still fit a dress from when you were a child!! How thoughtless to tell you your hips needed to be hidden, but insults just rolled of the tongues back then, I remember similar shitty comments when growing up. I raise my middle finger to them all now!

@Janice
I'm probably more shallow than I think, but I don't give a rat's ass about anyone's assessment of my appearance. Never did.

@Mim
The suckiness of my teenage years was *mostly* my own doing. I was such a pain.

@Sue
I was a large-ish teenager, but somehow the weight re-distributed itself after childbirth, so even if I still had the dress I likely couldn't have pulled it over my boobs.