At Christmastime My Fashion Sense Goes To Hell

It's the most wonderful time of the year. I don't have too many occasions when a red felt skirt makes sense, so the holidays it must be. I skipped the poofy crinoline because I drive a Ford Focus, and it would be a tight fit. I could have squeezed a petticoat into the Tempo though. They just don't make cars like they used to. 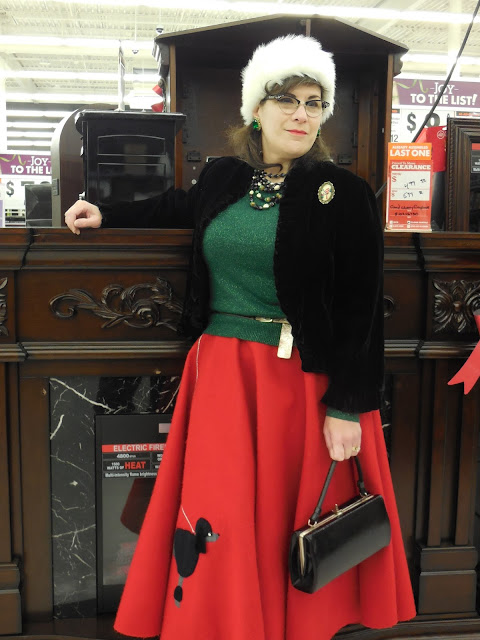 My outfit was very popular with the wee ones (and one creepy middle aged man). I made several people stop and smile in the midst of a rushed holiday weekend, which made me feel it was worth dressing like Mrs. Claus. That's me-spreadin' joy all over the fuckin' place (mostly Big Lots and Goodwill, but you know what I mean). 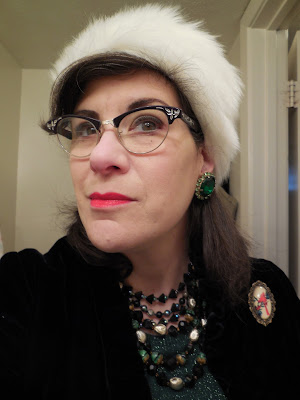 Want to know a secret? My hat isn't a hat at all, but a fluffy headband I bought at K Mart. I liked it so much I bought one in cotton candy pink as well. I get to be strange fashionable without smashing down my hair. 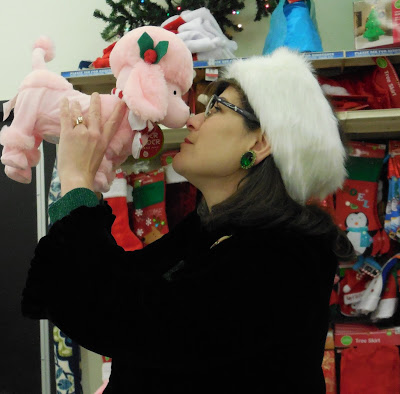 I came very close to buying this musical poodle (must have been the poodle skirt influence) that sings, "Sleigh Ride". I might need to go back and get it-everyone needs a pink poodle, right? 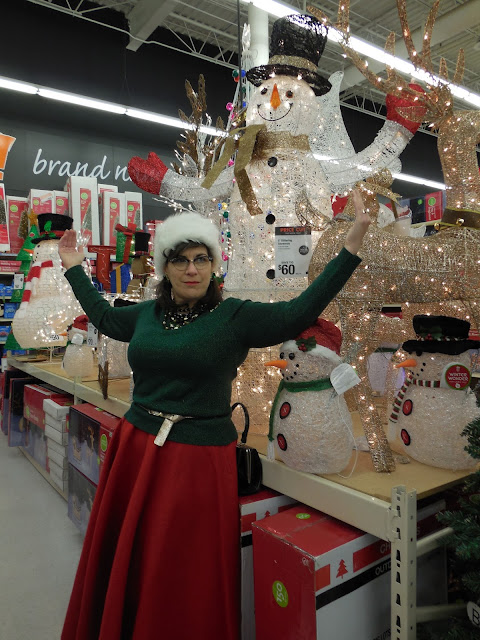 I stopped to do some calisthenics with a snowman. "Reach for the North Pole...OK fine, reach for Winnipeg." 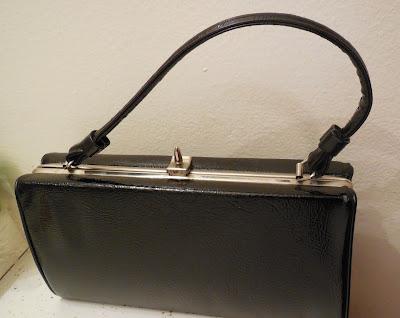 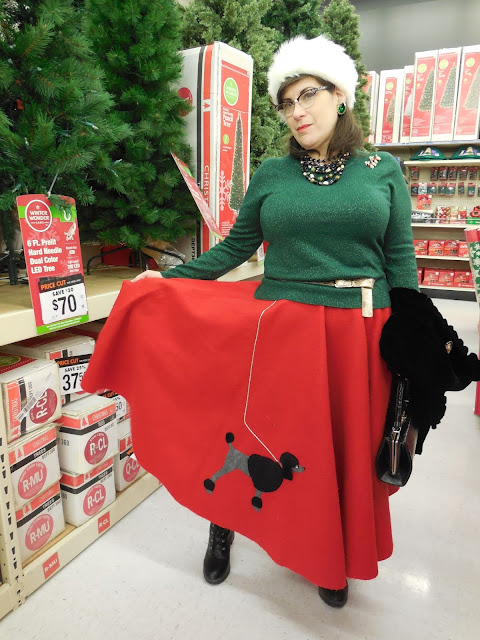 I'd like to say this is the craziest get-up I'm going to wear this season, but I think we all know that would be a lie. 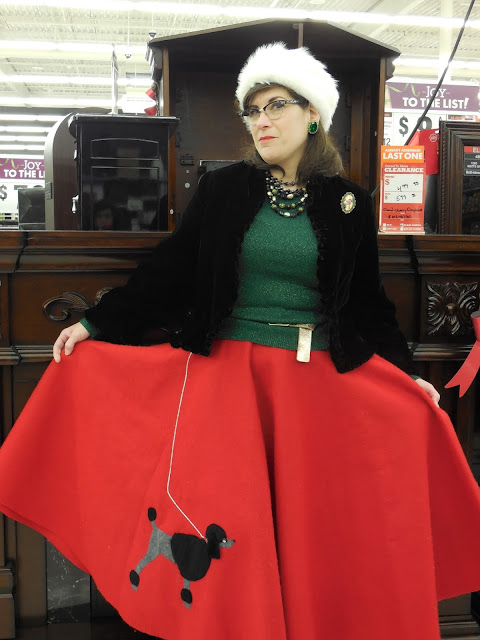 Someone has to stand in front of the fake fireplaces at Big Lots for holiday photos...might as well be the one with the furry headband and poodle skirt.

I'm having (more) oral surgery this week (Wednesday) so posting will either be nonexistent, or kinda rambling. Probably the later, though that might not be a good thing. We'll see. After my last couple disasters, I'm not all that excited to go through this again.

We also have (another) ice storm headed our way, so the state of our electricity is going to be fragile.
Have a great week everyone!

I am amazed. You not only figured how to wear the poodle skirt, but also created a seasonal look that isn't a cliche. Well assembled and accessorized! (I was about to suggest the skirt serve as a Christmas tree base covering.)

Ditching the crinoline was probably a good idea for many reasons. Once upon a dance date, my grand "ballerina" ball gown with more frou frou than a Russian tutu filled the cubicle I was occupying in the ladies loo, and so I found myself unable to reach the toilet paper. Crinolines and cat-suits should have warning labels...

Sending positive energies your way to arrive before the ice storm and during the surgical procedure. Move carefully and accept all offers of help!

I am truly loving that poodle skirt & sparkly sweater Xmas ensemble!
I would have worn that in a heartbeat in my 50's sweater girl era.
Speaking of ungainly undergarments, I put on one of my vintage bullet bras yesterday as I was wearing a sweater. Pointy boobies rock! But damn that thing is scratchy & digs into my shoulders. I tried those pads that clip on to the shoulder straps, but they didn't really help much.
I have 2 furry headbands like that, one is genuine faux black mink & the other some sort of auburn angora fur from an antique store in Berlin (the label's in Russian so I have no idea what it says). Quite comfortable & great for 'bad hair' days.
I think that pink musical poodle is a must have.
We're having another nationwide strike here in Nepal that accomplishes nothing. They've blocked out all the Indian TV channels again, not sure if the internet will go too.
Best wishes on your dental surgery.
Take your pain meds with a hot drink & at scheduled regular intervals to keep yourself properly narcotized.

I would be very surprised if that's your wackiest outfit in December. It looks very nice, but very normal.

Good luck with the surgery - here's hoping they sort everything out properly this time.

You need that pink poodle. Yes, you do. G'wan!

Big skirts: in a long-ago production of EUGENE ONEGIN, my costume had a huge skirt with a three-foot train. I had to go into the ladies' room stall sideways, do a quick quarter-turn while flipping the back of the gown up over my head, and then take little geisha steps back until I contacted porcelain. Eventually all the company ladies were skipping liquids altogether on performance days.

I am so behind (again) that it's getting embarrassing... But I've caught up on your posts, and I'm wishing you a happy thanksgiving and an even happier 4000th post! You found some amazing pieces at the costume shop (are they ex-fancy dress? I have found some real vintage beauties on fancy dress rails and ex-hire pieces on Ebay).
The jumpsuit made me laugh (yes, it does rather remind me of when my kids had that big full nappy look going on!) And the poodle skirt is magnificent, you do look festive in a wonderfully eccentric and kitschy way!
I've just picked up a 1970s tartan skirt too - I'll have to wear it on the blog and show you.
Sorry to be missing posts and kinda slow, but it's hectic round here. Good luck with the dental surgery, hope it goes OK this time. xxxx

@Beth
I thought of using it as a tree skirt too! Danny is rather a creature of habit though, and wanted to keep using the few yards of Christmas fabric I've been wrapping around the base for years without bothering to cut or sew it. I've often wondered how festival goers dressed in full vintage manage to use the portable toilets-it must be difficult.

@Bibi
Back when I used to sell bras at Filene's in Chestnut Hill (that could be a book) , I sold quite a few Cross Your Heart Playtex bras to achieve a similar effect. You get pointy without too much suffering.

@Curtise
Oh please don't apologise for having a busy life!
Some of the clothes are in their fancy dress section, but the owner also likes vintage, so she has a dedicated section of the store. Can't wait to see your tartan.

Oh Mrs Claus you get out there and spread some more joy, your look fabulous darling!!! Small children fine, but creepy old men, not so!

@Sue
...and Mr. Creepy was with his wife and kids.