I want to thank everyone for their help with regard to the previous post. I really do appreciate it-you   guys are great. I know there's a lot of junk on the internet, but as a tool for bringing people together    with similar interests, experiences, etc. it is a wonderful thing. I don't know how I survived before the internet. 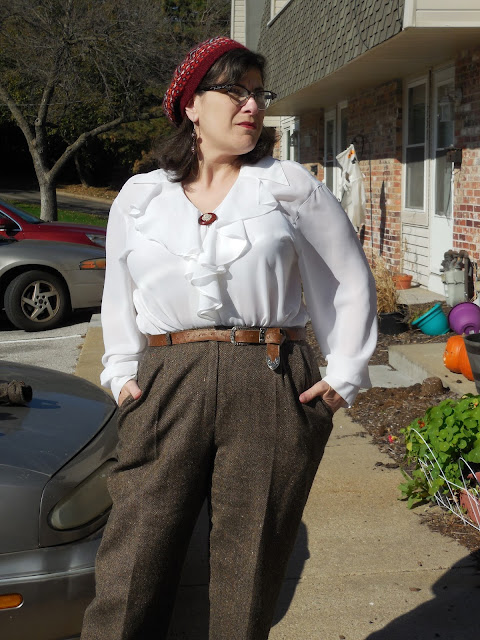 Yesterday was a bird-banding Saturday at Aksarben Aquarium, so we were up bright early to make the trip to Gretna. The early mornings tend to be cold, even inside as the building isn't heated much overnight. Experience has taught me to layer though, because on a sunny day the window-lined room where the banding takes place warms quickly. I don't like to helicopter over Danny when he's at activities, so I let everyone know where I'd be, and went off to find a comfortable chair in a quiet hallway to do a bit of work on my laptop. Two hours flew by (heh, bird banding and I said, "flew") and I accomplished much of what needed doing. By the time we were headed back to Omaha, the sun broke through, the air warmed up, and we were shedding layer after layer. We'll have a frost again tonight, and the garden is tucked-in to sleep beneath sheets of fleece. In the morning, I'll remove them and let the garden soak up what sun there is. Thus far, it has been working out nicely, and I harvested the first of the autumn turnip greens yesterday. Speaking of being tucked-in to bed overnight... 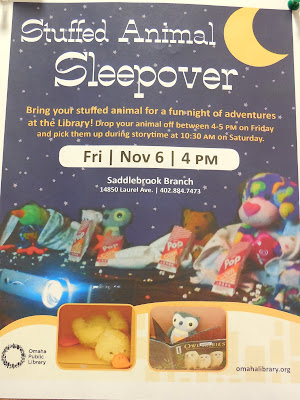 Awwww, how cute is that? Do you suppose they really stay up watching movies and eating popcorn? We have a great library system in Omaha. Oh, I know the mayor is out to destroy it, but some things transcend politics. Our libraries are much more than books. Can you imagine the reunions on Saturday when the young children get to hear what their plush animals did the evening before? I would love to go back in time and be three just so I could take Zippy the Chimp to the library for a sleepover. I'd get strange looks if I tried bringing him now. 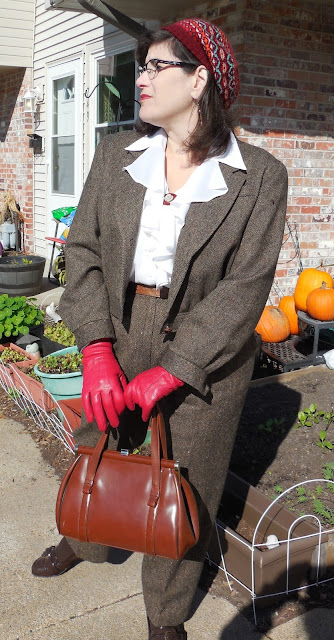 All this outfit needed was boots and goggles, but I went for shoes and gloves instead. It has steampunk potential though.

Outfit Particulars:
Vintage Pendleton wool suit (I'd guess 80's by the jacket, shoulder pads, etc.)-Goodwill .99 cents! It was "colour of the week" tagged.
Gap blouse-Thrift World
Shoes-K Mart
Handbag-Goodwill
Gloves-K Mart
Belt-Had it since the 80's (I think it was Outback Red but the stamping inside has long since worn away)
Brooch-Either Hand-Me-Ups or Et Cetera-I can't remember
Italian glass earrings-had them for ages
Beret-K Mart a few years ago
Fragrance-(I'm sure Mim guessed it) Caron En Avion (I had to with this outfit. I really should have gone all boots and goggles though. Next time) 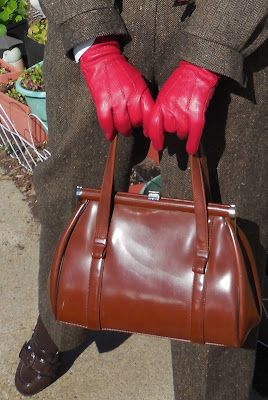 So that was Saturday. Sunday brought out the 40's vintage clothes for a wearing. 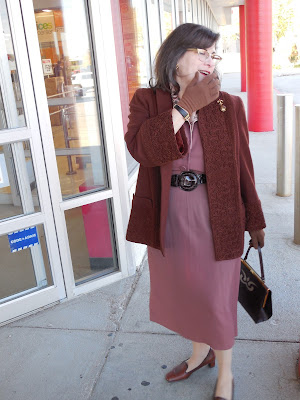 I had the perfect vintage hat, but with 45 mph winds, I decided to leave it off-chasing a hat down the street isn't my idea of fun. 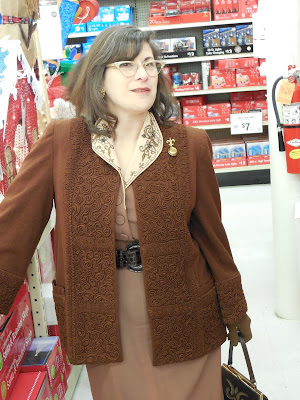 The dress is a mauve-ish colour that really doesn't photograph well. It has considerable fading, though it already had that years ago when I purchased it. I'm not certain what colour it began life, but now it is a brown-grey-pink hue. It was originally purchased to be my wedding dress, but then I found a mauve taffeta number form the 50's that I wore instead. We had a courthouse wedding, so it really didn't require anything formal. 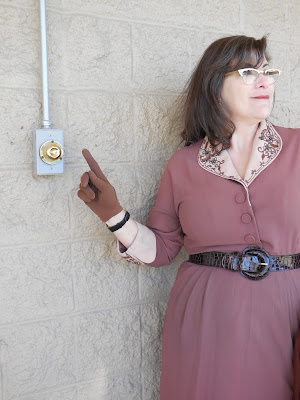 Say, what's this attractive nuisance? not me, silly, the bell! Don't worry, I didn't ring it-I don't want to get myself banned from Big Lots. I wonder how many times a day that button gets pushed by passersby? 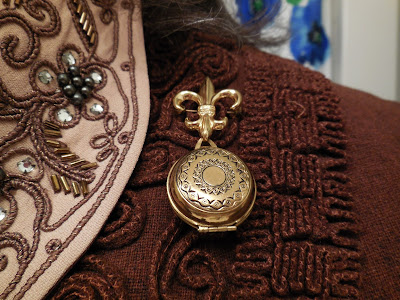 The locket did have a picture in it, which I removed. I believe it was part of the original packaging as it appeared offset printed rather than developed from film. It also appeared to be a picture of Bob Hope. I saved it, if I ever sell it it could be a conversation piece, I guess. 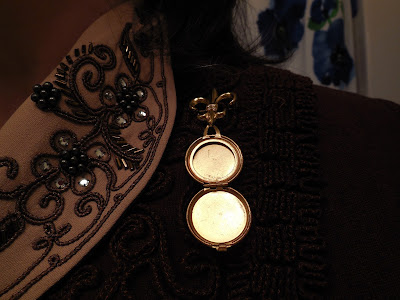 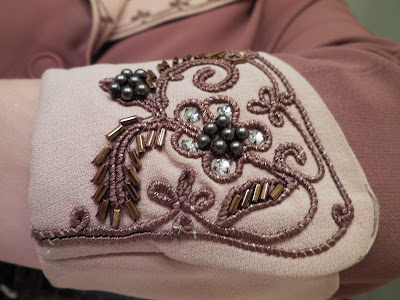 I am such a sucker for beading. 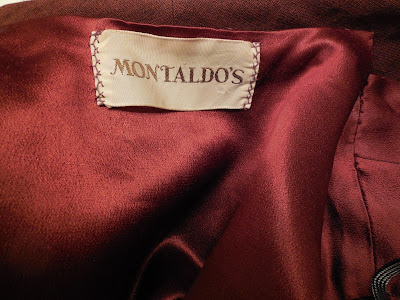 The lining on the jacket is in good condition, with only a small bit near the shoulder that needs tacking. I paid $7.00 for the coat on their clearance sale last summer. Sometimes I find vintage in the most unlikely places. 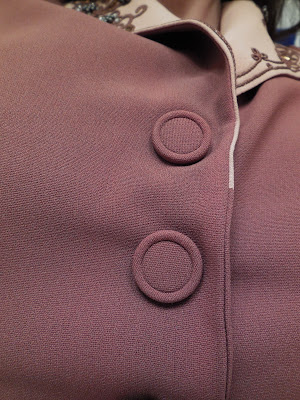 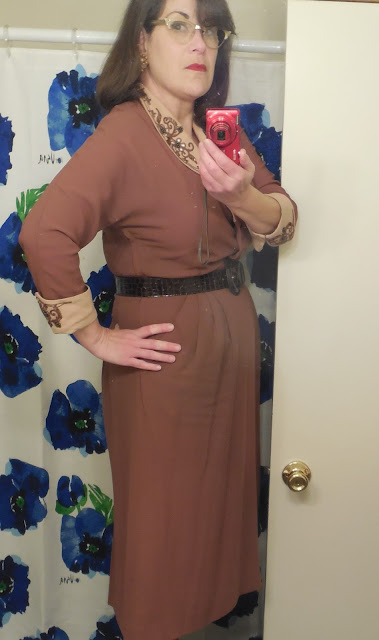 A blurry photo in a dirty mirror of the side-half zipper. You get the idea. 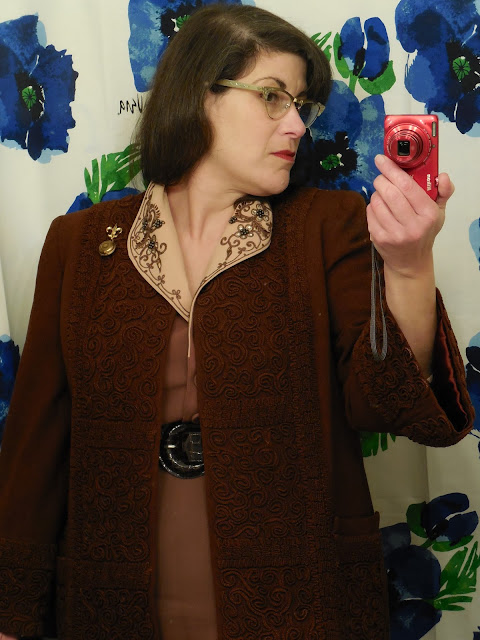 The colour in this photo is closest to life. Some clothes are really tricky to photograph.

What day is today? Today is Caftan Sunday! I knew that would make you smile. I'm smiling on the inside. 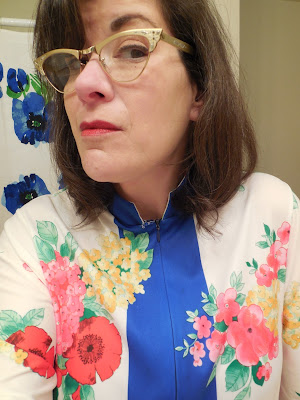 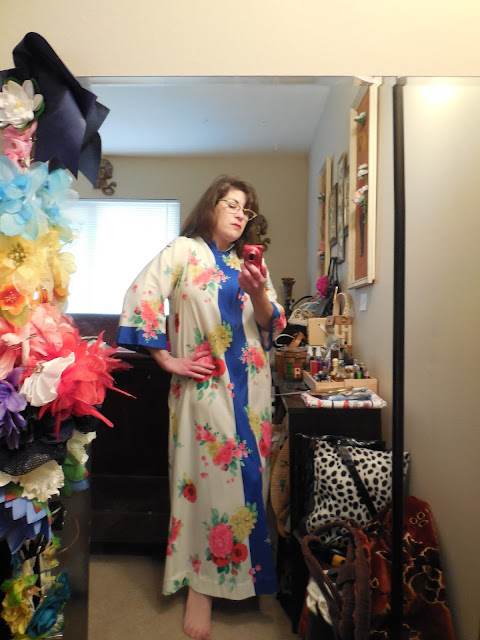 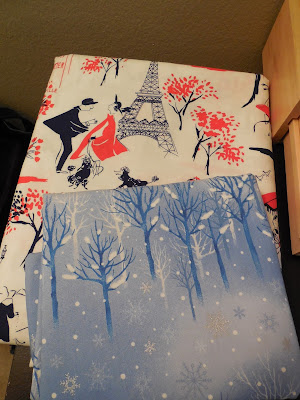 I'll leave you with a sneak peek at some fabric I brought home this week.

You and Zippy so need to go to a stuffed animal sleepover. Wear an animal onesie and put curlers in your hair!!! I dare you!! Very cool locket brooch, of course Danny and Mr ETB will feature inside it soon.

Loving those 40's drabs on you with all that exquisite beading & embroidery.
The Pendleton wool suit looks a bit 'Annie Hall' as well as having steampunk potential.
That 70's floral caftan is divine, it reminds me of a Natori caftan I bought in Singapore.
All has ground to a complete & total screeching halt here. All airlines have now ceased flying here as Nepal doesn't even have enough fuel (of any sort) even for 'emergency' flights. So if you get caught in an avalanche on Everest or buried in a landslide or some other castastrophe, you'll have to wait for the army to hike in & carry/dig you out.
The neighbors are cooking on wood fire stoves outside due to the lack of cooking gas. My sinuses and the tourist season here are 'khattam' (over, finished, kaput, in Nepali).

Ooooh that Sunday outfit! The detail on it is amazing.

I wonder what the animals get up to on a sleepover? The Natural History Museum in London hosts 'dinosnores' events where people can sleep out among the dino skeletons; that's always looked like fun to me.

OOOOOHHHH that mauve dress. Scrumptious. We all want to carry a photo of Bob Hope next to our hearts, don't we? Not. I think that Caftan Sunday should be a national holiday. I plan on adding it to my calendar. Yours is so beautiful. When we lived in Connecticut they had a sleep-over at the Natural History Museum for the Brownies. It sounded like fun so I chaperoned. It was absolutely terrifying for the little girls and ME!!!! Very creepy. Maybe a library is less scary. Maybe...

@Sue
Perhaps we should have a virtual blog sleepover party where everyone wears their pj's. What do you think?

@Bibi
I hope they get things resolved soon-being without fuel is a drag. Wood might be better than some of the other things people burn for fuel, though I'm not sure dried dung actually smells. Being downwind of anything burning is awful though (everyone on farms around here burn trash in pits). Keeping my fingers crossed for you.

I'm not sure what goes on, but for some reason the animals all come home next day reeking of gin...

Please feel free to join-in on Caftan Sunday! I'd love company.
Yeah, I don't think I'd like an over-nighter in the museum either. Our libraries are definitely less scary...and I'm the only dinosaur hanging around there ;)

I seriously like the idea of a blog sleepover!!!