Charles of the Ritz, Enjoli-Review 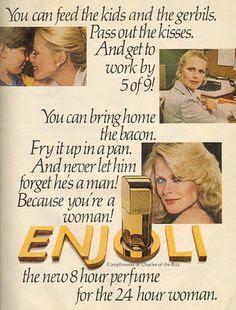 Spray on some of this stuff and you'll be feathering your hair before you know what hit you.

I wasn't expecting much, but with a full, unopened vintage bottle in my possession thanks to the local Goodwill, I knew eventually I'd have to give it a try. Enjoli was everywhere in the late 70's, but I couldn't quite remember what it smelled like beyond a lot of oakmoss and amber. How bad could it be?

I sprayed the tiniest bit on my wrist and couldn't get much, but what was there seemed OK so I went full-on 1970's woman and sprayed like I meant it (sort of the equivalent of, "Drive it like you stole it"). Well, I won't be doing that again. Despite having that damned commercial in my head for more than 40 years, I;d apparently forgotten that Enjoli is a concentrated cologne. The eight hour cologne for the twenty-four hour woman. I'm more of a four hour woman these days, at best. If I'm going to be reminding anyone he's a man, it will be because I'm yelling at him to put the bloody toilet seat down.

Strangely, Enjoli wasn't immediately familiar the way that other long gone scents have been when I tried them. Last week, I finally got around to wearing some of the gigantic bottle of vintage Diorissimo I bought (also full at the Goodwill) and before it even hit the drydown I knew which friend's mother used to wear it. Some things you don't forget, but Enjoli is so much like other fragrances of its era, it is quite forgettable. Given the choice between Enjoli and Halston, I'd go for the Halston as it is a better balanced version of the same notes.

I've always winced a bit at big aldehydes, but after they settle down, I can typically tolerate what they have to offer an overall composition. I like oakmoss and peach (Mitsouko) and most of your classic chypres, but this one goes off into a terrible green note that reminds me of my sister's favourite in that era, Aliage. It was a huge relief when she discovered Chanel no. 19! Unlike Aliage, Enjoli doesn't smell youthful or modern-it smells like something a cranky, soon-to-be-retired state worker would splash on for her job at the DMV. It grabs the form from your hands, stamps it, hands it back to you and yells, "Next!"

Enjoli does indeed last a good eight hours (a bit longer in my experience). If I liked it, that would be great, but I don't and it seems to be scrub-proof. Enjoli is swinging that frying pan at your head, daring you to try leaving. It is a bit better a few hours in, but who wants to wait that long for something to be tolerable?

I'm aware of how attached people are to Enjoli because it reminds them of youthful days, their mothers, etc. I get that. I'm sure there are people who really do love Enjoli and I wouldn't discount their credibility. Enjoli isn't a terrible fragrance, and I can understand what people see in it, but alas it is not for me. This is one blast from the past that will likely need to remain there for me. It is possible that I'm not smelling all the big florals others do (my specific jasmine anosmia might be contributing) and outside of a bit of peach and bergamot, I really don't get any fruit notes. I've seen Enjoli described as, "juicy and fruity" and I just cannot smell that at all. If anything, the peach smells a bit more like rotting meat (not always a bad thing with peach notes, but not what I'm reading described in reviews). Near the end, there's something spicy in Enjoli beyond the sandalwood, and I can't quite pin it down. Like a spicy wax, but not a spice scented candle. Maybe like a Catholic church, a few hours after mass with the scent of wax and incense still in the air. Perhaps that's it-it smells a bit like St. Cecilia's during the flower  festival. Just add a pipe organ.

Did you/do you wear Enjoli? Am I missing something here? Clue me in, please.
Posted by Goody at 8:54 PM
Labels: 1970's, Charles of the Ritz, Classic Fragrances, Enjoli, Fragrance Review, Reviews, vintage perfume

As I recall all Charles of the Ritz products were crap.
I received a set of Charles of the Ritz products for Xmas when I was 14 or 15 yrs old.
CotR used to have a line of makeup too. The set included a mini bottle of Enjoli, a red lipstick, an eyeshadow, an eye pencil, and a tube of mascara. The CotR lipstick & pencil were so waxy it was like rubbing a crayon on your lips & lids, the eyeshadow was some garish chalky blue, & the mascara was a dry, crumbly mess.
Enjoli must have been forgettable as it was soon tossed along with the crappy makeup.

I bought another Jeanne Arthes fragrance recently for $8.
It is- "Les Lions D'Arthes by Jeanne Arthes pour Femme."
The box & bottle are quite wild & wonderfully kitschy. The masculinely shouldered bottle has frosted glass lion heads on each side & a tacky plastic gold cap. The scent is familiar. After the initial citrus blast dies down there's the strong tagetes/marigold note of Donna Karan's Gold, & the carnation/clove & strong orris notes of L'Air du Temps on a spicy Oriental base. It's not bad, although why anyone would want to smell like the bitter green of marigolds/tagetes is beyond me.
The reviews on Fragrantica compare it with Missoni & TF's Black Orchid & mention chocolate & spicy orange being predominant- I think these reviewers are confusing the pour Homme with the pour Femme versions of LLd'A. There is definitely no chocolate or sweetness in the pour femme version. After about 2 hours it dies down to powdery orris. Not sure what any of this has to do with lions, but oh well.

Bless you for the reference to the cranky BMV clerk! This is a new train of thought to be boarded: Do communities of government clerks smell the same because they patronize the same drugstore fragrance counters? The same co-worker who peddles Avon? And are student nurses still instructed not to wear any scents whatsoever or was that prohibition discarded along with the napkin-folded caps?

A quibble! Charles of the Ritz' Revenescence was my mum's main defense against the ravages of time. J'adored sneaking a daub of that pearly goo that smelled of flowers. I used it as a hand lotion to battle the odor of Dog, and considered it a just reward for having bathed said Dog.

@Bibi
Because, "Fuck yeah, LIONS?"
Then again, I'm partial to the tacky plastic lions I have hanging in my bedrom, so perhaps I'm not the best person to answer, "Why lions?" I'll look for that one.

@Beth
Most of the hospitals have banned fragrance completely, which to be fair, I understand. Hospitals should smell like ether and castille soap. My mother-in-law was a nurse, and I don't think I've ever smelled perfume on her.

Don't you hate when you bathe the dog, and the dog ends up smelling better than you do? I never understood how that could be possible. I never heard of Revenescence, but if it could cut through the smell of wet dog, it must have been great stuff.