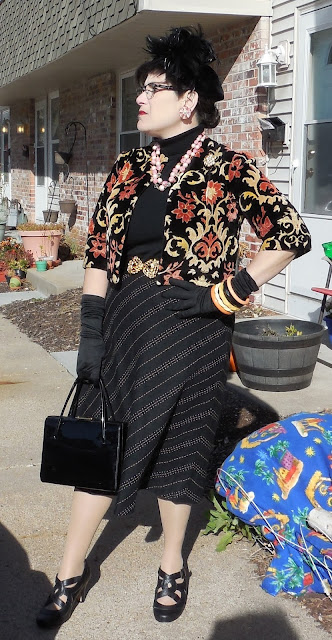 I had to go to Iowa today. When I dress like this in Nebraska, I get a lot of stink-eye. In Iowa, where they respect a nice hat almost as much as a Maid-Rite sandwich, it is an ice-breaker for conversation. I had a lovely afternoon, chatted with some interesting people, and was able to, "do my own thing" without hostile glaring. Sometimes I think I'm living on the wrong side of the Missouri river. I know it is only a short bridge to Council Bluffs, but the attitude shifts and people are less full of themselves. 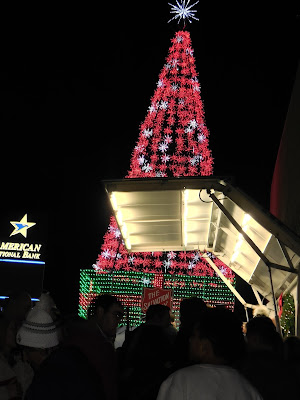 Last evening, we went to the tree lighting at 90th and Dodge. Kind of a pushy, line-jumping, obnoxious, "I'm entitled" crowd this year, which is a shame. So much for the "Christmas spirit." I live a two-minute walk from there, but it was really a spectacle watching people fight-it-out for parking spaces nearby. My mother wasn't a fan of the Salvation Army and wouldn't drop any money in their kettles because she felt you shouldn't have to sober-up, and join a religion to get some help. I'm not sure they still require sobriety and prayer from those that benefit from their services. At any rate, I laughed a bit to wonder what she would think of us standing there at a Salvation Army sponsored event. She'd probably say I need a drink (and a smack upside the head). 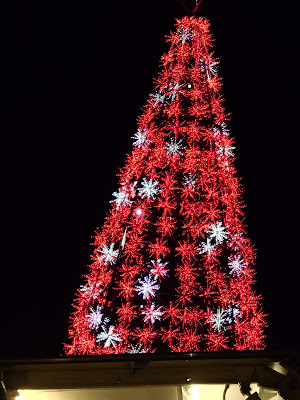 I really do like having such a large beacon telling me where to turn on the way home at night. I love this neighbourhood-there's a library across the street, a Walgreens on the other corner, two hospitals down the block, a small medical college, a grocery store a few blocks further, and one of the best yarn shops in America that brings knitters from all over the world to our little part of Omaha. I hope that the behaviour I witnessed last evening was from people who don't live near us, but came in for the event. I'd hate to think that's doomed to be our new normal. 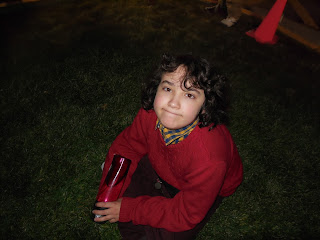 The weather was so mild Danny didn't need a jacket-That's rare around here mid-November. 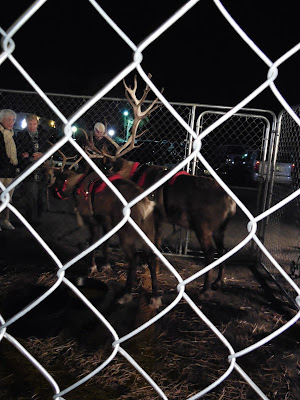 There were reindeer, but I didn't see Rudolph. Perhaps he had to disguise his red nose or the Salvation Army band might think he'd been out drinking. The animals seemed jittery, pacing their small enclosure in the parking lot as cars raced by. I'm sure my camera flash didn't help matters. I didn't see Santa either, but I did see a bunch of politicians, and the actor that plays Scrooge every year at the Community Playhouse. At least I think it was Scrooge-could have been the mayor, they have a lot in common (though even Scrooge would keep his filthy mitts off our library!). 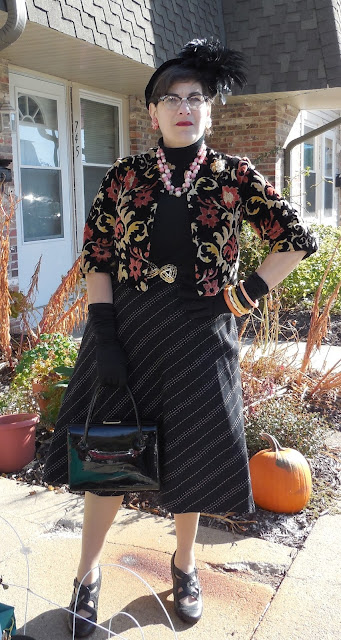 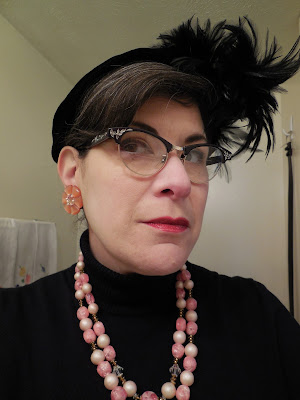 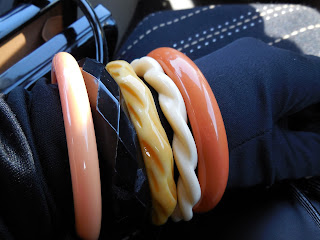 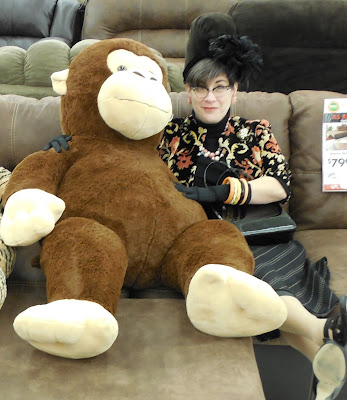 If you leave giant plush animals (you thought I was going to say, "Stuffed" didn't you? Ha ha, stuffed animals!) on a sofa display you should expect children to play with them. Since there weren't any children about, I stepped in. He said my hat is quite fetching. We have a date next door at the pet shop, something about getting de-wormed? 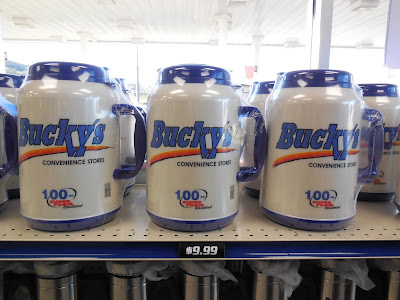 I saw these in Iowa. People visit the US and are shocked by the gigantic portions of food and drink. These are travel coffee mugs-they hold about 1 gallon US. Just to give you an idea of scale... 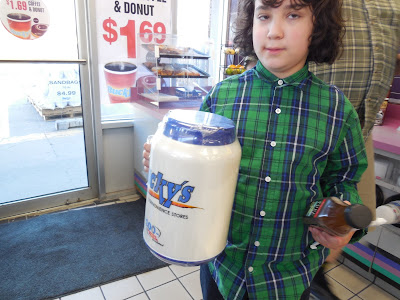 ...here's Danny holding one. There's no law saying you have to fill it with coffee-you could get soda, or juice, or a milkshake, but the coffee refills are free, so that's your economical option in the event you wanted two gallons. Even I think that's obscene, and I love a good bargain. 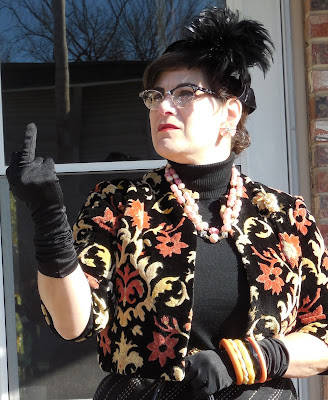 Sigh. I hope I can shake this cranky mood-it isn't much fun. I really should move to Iowa.

The hat is splendorous! Moi, I'd even pay my hairdresser for an French knot 'do to do it justice. (But what happened to its veil? Should there not be a veil?) Amd those crossed-strap shoes were made to be worn with the diagonal stripes of the skirt! Emeraude is exactly right for this traditional, posh, public occasion. (My Sin or Maja would be too, er, private occasion.)

Despite the narrow minds revealed by the squinty eyes of your fellow Nebraskans, I envy you your convenient neighborhood. Lacking public transportation in Indiana as we do, even in good-sized cities, it's no small task to find a home base where one can live comfortably without driving/maintaining a vehicle. Proximity to a college campus, where those who demand libraries and other amenities of civilization, appears to be a locater beacon.

Real Reindeer's!!! How very exciting, and I too would have been looking out for old red nose. Take another look at the photo of you and the 'plush' toy, you look like you have the most amazing up do hair. That travel mug would require quite a few pit stops if you know what I mean, or nappies!

You're right-there should be a veil. It does not appear to have any marks indicating it once did, but I will see to it that some netting is sewn on.

I used to be able to do a passable French twist with just two hairpins, but these days, I cheat and use a large comb. The hairstyle in the photo is little more than a low ponytail tucked up under with some pins.

Part of our decision to move over here was proximity to public transportation. Mr. ETB doesn't like driving, so he takes the bus to work (a straight shot down the street about 3 miles-you could do it on a bike in good weather). After a 60 mile commute each way all those years we lived in the country, he's happy sitting on the bus reading a book. I can't say I blame him.

Ha! You're right! I hadn't noticed the hat. I wish my hair would do that. You know, there was a second large animal next to it, and I thought about getting between them, but then thought that might be, "too much" for Omaha.

My dad's years driving a truck taught him to keep an empty bottle handy for those times when there's nowhere to stop... sooooo, if you ever find a bottle of something yellow along a road there's a good chance it is piss.

That outfit is just divine, head to toe fabulousness!
I had no idea Iowa was less uptight than Aksarben. Then again, what do I know being a native Californicator? I thought the Midwestern mentality started east of Interstate 5.
A yarn shop?!? Do they just have knitting yarn, or do they also have tapestry/needlepoint yarn? I was having a really difficult time finding good quality tapestry/needlepoint yarn online or off in the US on my last visit to Florida. The best tapestry/needlepoint wool yarn is from the UK, but I didn't feel I had the time to have it shipped & get it through customs from the UK on my last US visit.
On importing anything 'natural fiber' (wool, silk, linen, etc.) into India or Nepal be it used clothing, rags, carpets, new clothing, yarn, ANYTHING- My resident textile transport expert of Kashmir (aka the Sheikh) says, "JUST DON'T!", it's considered a threat to the indigenous industry & they will charge egregious amounts of duty, customs, luxury tax, value added tax, & whatever other fees they can possibly think of to dissuade it.
My youngsters were marveling over the bucket sized servings of pop too, ice cubes in drinks were new to them also- they were like "Why?"

I could drink a mug full of tea that size, but then I'd probably need to stop every 15 minutes to find a loo, so there wouldn't be a lot of point.

That jacket and hat are splendid. Anyone giving you the side-eye is probably secretly wishing they could dress as glamorously.

@Bibi
They used to sell tapestry yarn, but I stopped doing needlepoint so long ago I wouldn't notice if they had it or not. I buy most of my yarn at Ben Franklin or Hobby Lobby because there's no point wasting good yarn on my lack of skill.

@Mim
If you drank that much tea you'd need a kidney transplant. I wonder if most people just fill them with ice and use them to keep other drinks cold? I mean, if you spilled that much of a hot drink in your lap-it could be serious! And where do people put it? The cup holder in my car wouldn't be able to manage that.