Today's Outfit brought To You By The Letter, P

P for Purple and Paisley. 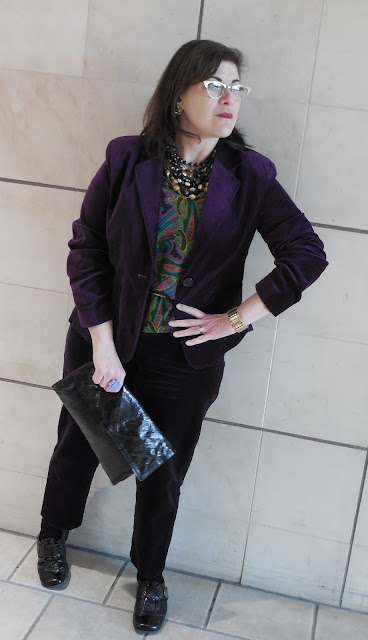 This isn't a suit, but the shades of purple velvet were so close I decided to go all-out and wear them together. I briefly considered a ruffled shirt, but some looks are best left in the past. Paisley seemed like a good 60's compromise.

I don't wear trousers much, but I've held onto this pair for about 25 years now. I suppose that's why they're still in good condition as they are rarely worn more than once a year (if at all). The jacket was a recent purchase that Danny has voiced an interest in having. I'm not thrilled with the look on me, so he's welcome to it. Maybe he can pull off the ruffled shirt with it. 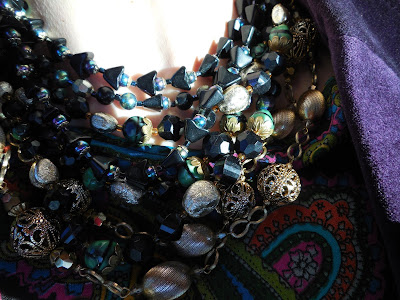 Necklaces help make clothes more interesting. Why wear one when you can wear three? Right? 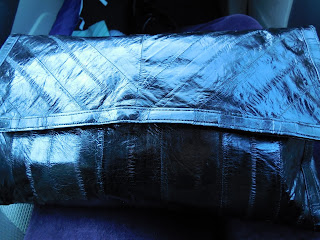 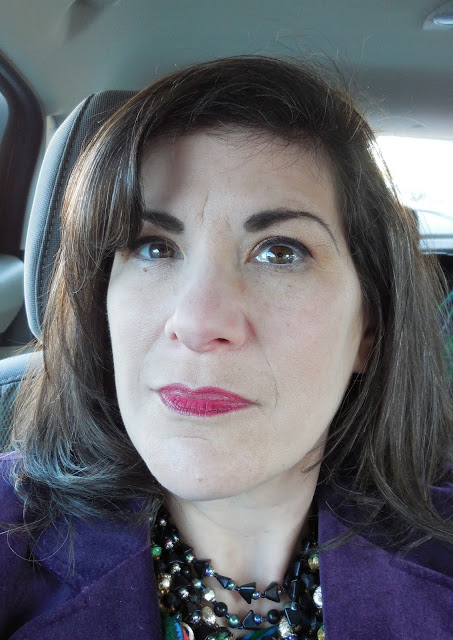 Whoops-gotta watch that lipstain/gloss combo because it wears off funny. Learn from my mistakes. 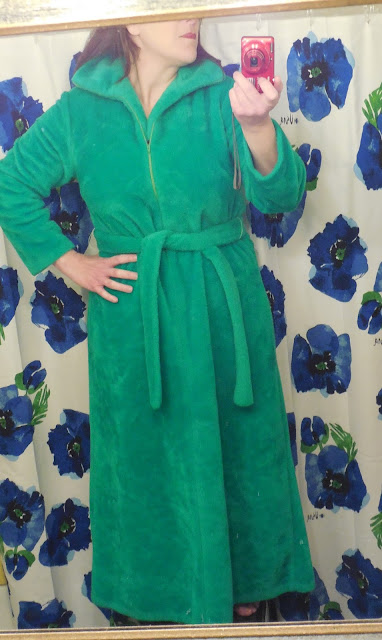 I know this is Sunday and there ought to be a caftan, but I have a new lounging robe to share with you. Long ago,( in the 70's) before there was polar fleece, there were these fluffy-furry synthetics. They made everyone look like a teddy bear, but they were warm, easy to care for, and came in the wildest colours. I had a pink robe not unlike this one that I loved. This one is from the Sears, "At Home Collection" and probably dates to the mid-late 1970's. 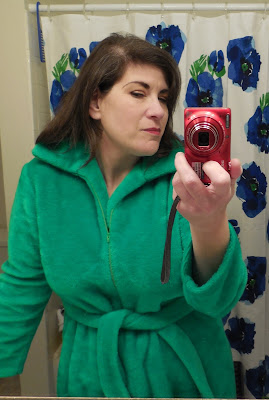 I dragged myself back to the costume shop in the abandoned mall to look a bit more through their vintage and costumes as it is all 50% off. I came home with a Mr. Blackwell evening gown from the 60's, an Estavez silver lurex disco maxi, a gold lame Halston skirt, and a 1950's taffeta cocktail dress. I also bought a red felt poodle skirt which is so not my style, but I couldn't pass it up for a fiver. There were a few other skirts as well. I obviously don't need anything, but at those prices I couldn't refuse.

We're in a race to finish up our lessons before the end of the semester in December. I'll be glad to say goodbye to the 20th Century, and start the Renaissance in January. I really wasn't looking forward to teaching WWII and I think it shows. We're covering the material of course, but I can't say I've been enthusiastic about it. Films have been helpful, particularly with giving an overview to the battles. I hadn't watched Tora Tora Tora since I was young, and it was interesting to note I still thought it was as well done as I did back then. Sometimes movies show their age. We've watched documentaries too, and several propaganda films.

I've been putting off reading Man's Search For Meaning, but I suppose with the semester drawing closer to the end we really need to deal with it. We're going to read it aloud (it is a short book, particularly is you skip all the psychology rubbish in the second half of the book) and it is going to be awful, but I do think if ever there was a right time to do it, now is that time. I can't open a newspaper or turn on the radio without some politician using the attacks in Paris as a justification for scapegoating a vulnerable and suffering group of human beings. The language is awfully similar, and yes I know, you're not supposed to compare people to Nazis, so I won't...if they stop sounding like Nazis.

I hope you have a great week, and that you are able to tune-out the awfulness people seem hell-bent to carry out, and others are equally happy to capitalise on.

Lucky Danny, getting a gorgeous purple velvet jacket like that! You can explain to Danny the meaning of "psychedelic" & why purple velvet jackets should always be worn with paisley or ruffled shirts.
I remember when that shade of jade green was popular in the mid 70's, I had a similar furry synthetic robe with a zip & matching nylon satin trim.
I haven't found a lipstain I like except for YSL's very pricey Volupte Tint in Oil, all the others seem to dry out my lips.
Those sound like some great scores from the costume shop - I hope we get to see them all.
The propaganda & fear machine is really in full spin isn't it? You know they have a new app that tells you who your racist & bigoted friends are nowadays, it is called "Facebook". Luckily it has a handy "defriend" feature also. I'm really beginning to think ours was the last generation that had 'critical thinking' included as part of our education.
In regards to your question on the previous post-
A "wobbler" is washing machine without a center agitator. The entire tub wobbles and Samsung claims this creates less wear on your clothing as well as eliminating the twisting of all your fine washables into a knotted mess. It does clean well & quickly. I can say that it does NOT prevent your 8 meter long saris nor bedsheets from becoming a knotted mess. Washing machines are still quite new to Nepali & Indian households. Because there are no proper hook ups for a washing machine nor a laundry room indoors of any sort in India & Nepal, the washing machine is usually stored in a wide hallway or out on a balcony. Then when you wish to use the washing machine you must carry the darned thing into the bathroom, hook it up to the tap, put the drain hose down the shower drain, & plug it in to the electrical outlet while wearing rubber soled shoes or rubber gloves lest you electrocute yourself. The newer Japanese & Korean washing machines that are built specifically for the Indian market have handles built into the sides to accommodate carrying. They also feature a "sari cycle." I guess they don't put wheels on the bottom as the washing machine might go bouncing around the bathroom when on spin cycle. Washing machines made for India also come with a vermin resistant plastic plate that screws onto the bottom as rats & the monstrously huge cockroaches native to the Subcontinent tend to nest in them. Home washing machines in Asia are about half the size of washing machines in the US & will only accomodate 7-10 kgs. Front loaders & the old side by sides (with the wash tub separate from the wringer tub) are available in tiny sizes too. Electric clothes dryers are a luxury item & rarely seen in India or Nepal. Oh, how I miss warm, fluffy, soft, bath towels fresh out of the dryer!

You have a great week too!

I like that robe, it looks so delightfully cosy. Wish I was snuggled up at home in my dressing gown instead of waiting for work to start...

I didn't know that's what they're called-we have an agitator-less machine as well. We got tired of replacing the machine every few years so we bought a heavy-duty one intended for multiple users (like an apartment building). It cost more up-front, but so far (fingers crossed) it has held up better.

@Mim
I feel so decadent in that thing!

I do love a velvet jacket, especially paired with paisley, but hey, if you aren't feeling it, then it'll be Danny's gain!
Your green dressing gown is perfect for chilly mornings - of which we are getting a few now...
I've just been catching up on your last couple of posts - the costume shop sale sounds fantastic, I can't wait to see you wearing your new finds. I do exactly the same thing, buy things because they are ridiculously cheap and I can't bear to leave them behind. Not the most sensible of shopping tactics, but hey ho.
I honestly cannot believe half of what I see written or hear on the radio about recent events in Paris (phone-in shows, I really shouldn't listen to them - most people make my blood boil, at the least the idiots who call in to the radio...) And the politicians' response? Let's bomb Syria, and kill a load more people who are nothing to do with any of this. That'll help. What a bloody awful world it is sometimes. xxx

I've learned the best way to deal with people doing bad things, and people who capitalize is to go to a yoga class, then take a breath, then say a prayer and send out positive thoughts. I went to a yoga retreat once, and I learned how to really humm out an OHM. I started going to kirtan (OK, I only went once). Chanting with others really helps too. It may sound wierd, but it's all about pushing positive thoughts out into the universe. OK, my loopy lecture for dealing with madness is over.

I wish I could take you to Fairytale Costumes-it would blow your mind.

I don't think you sound loopy-if it gives you peace, it is worth doing. I'm absolutely the wrong sort of person for yoga, or TM, or anything like that, but I do respect it. Have you ever seen film of Allen Ginsburg chanting in Lincoln Park as the riots during the '68 Democratic convention were going down? I thought it was the perfect response to madness and violence.

Woof, you covered so much territory in this post! This would be a two cups of coffee conversation, circumstances being otherwise.

I met Viktor Frankl when I was a college student, many years ago. A sweet man, a gentle man, and a man fiercely determined to declare the ultimate victory of the human spirit over evil in humans. At the time we thought the Nazis the worst mankind could produce. Now we know better.

His story of the woman who paused in her flight from the Nazis to consumer an extremely rich dessert resonates with the citations of chanting, meditation and prayer. Frankl appreciated the inner strength we (women) derive from flowers, scents, a hot bath, new clothes -- a hat! Small cuts can cause the soul to bleed, small bandages can heal them. Me, I'll feel better about the insanity of Black Friday when I get to see your loot from the costume shop!