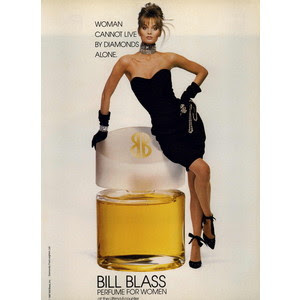 I was trying to remember what sort of fragrances I was wearing in 1978 when Bill Blass for women was released. Je Reviens, of course, and probably Rive Gauche, Mitsouko if someone else was buying because I couldn't afford it, and I might have dabbled with Opium (but I swear, I never inhaled!). I don't remember encountering Bill Blass perfume until the early-80's, and by that time it was so saddled with associations for me that I never bothered trying it out. I wouldn't wear Bill Blass clothing, so I wasn't going to seek out the fragrance. Might as well vote for Reagan if you're going to go that establishment. 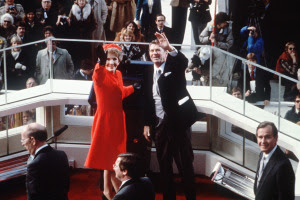 I was recently gifted a few samples of vintage Bill Blass fragrances. I can tell you right now-Hot is something I will never wear. On me, it is a scrubber, and I won't even bother with a review because I don't think I can be objective about it. Bill Blass for women was a different story. Removed from its time, there's something appealing about it, though with entirely too much cinnamon.

Cinnamon is such a difficult note to pull off well. It can bring a fragrance together, or it can dominate and kill off anything else interesting that might be going on. Blass is somewhere in-between. I find myself wishing the cinnamon wasn't there-particularly against the spiciness of the carnation, but were it removed entirely the perfume might be too green and floral. There's a pineapple note in there as well which on paper sounds like it would be disgusting, but works well with all the green notes. There's oakmoss and vetiver, but Blass is no chypre. I don't know what the hell it is, but I know what it isn't.

For the record, I can't picture Nancy Reagan wearing this perfume. I'm having a difficult time conjuring an image of anyone wearing this-talk about a branding problem. Bill Blass smells a bit like the result of a child playing in their mother's perfumes. A little of this, a bit of that, and some fruit cocktail, snickerdoodles, and Dial soap used to clean it all up before naptime. I'm having trouble getting any sort of development from Blass-it all seems to hit at once with the overwhelming cinnamon that just won't let up.

Bill Blass for women was probably a bit ahead of its time. By the late 80's, this sort of thing was everywhere (I'm thinking of  the original Escada for women) but in '78 this must have seemed if not weird, a little strange.

The notes read like a perfumer's handbook with everything imaginable thrown at it. According to Fragrantica:

What? No rose? Has everything else.

If I could get into a time machine and transport myself to 1978, I might feel differently about Bill Blass for women. For a name so associated with all things establishment, this perfume would have been (hushed tones here, lest anyone hear) radical. It hardly seems that way today, but we've all been subjected to everything that came after.

I'm glad I had a chance to try Bill Blass for women, and though I won't be seeking a full bottle of the stuff, I must say it exceeded my expectations. This is a perfectly wearable fragrance that has aged well. If for no other reason than to experience the oakmoss and pineapple combination, it is worth a try if you run across an inexpensive bottle, or a decant.

I always confuse Bill Blass with Bob Mackie. Not sure why as all I remember Bob Mackie for is designing the costumes for the Carol Burnett show.
Truthfully the notes listed for that BB frag sound horrid together.
I'll pass on the cinnamon bomb, thank you.

I've encountered oakmoss and pineapple in Jean Patou Colony, and it is surprisingly nice, though that scent is very much about the pineapple. Bill Blass sounds like it's a bit overloaded with notes, from your description.

OK, so what fragrance DID Nancy wear? Or what fragrance do you think Ronnie bought for her? This is an interesting topic, this is: apart from the stuff psuedo-celebs concoct and peddle, what do they actually wear?

@Rebecca
I'd send you some but shipping perfume to Canada is next to impossible. They still make it though, so you should be able t hunt some down.

@Bibi
Mackie dressed a generation of drag queens better than anyone else. I have a few of his later pieces that while nice, just don't have enough sequins! Now I need to revisit his perfumes-thanks for the reminder.

@Mim
I think I would really like BB were it not for the cinnamon. I have to get hold of some Colony-awful name or not.

@Beth
Supposedly Nancy wore Galanos, but I'll bet she doused herself in Youth Dew when alone.