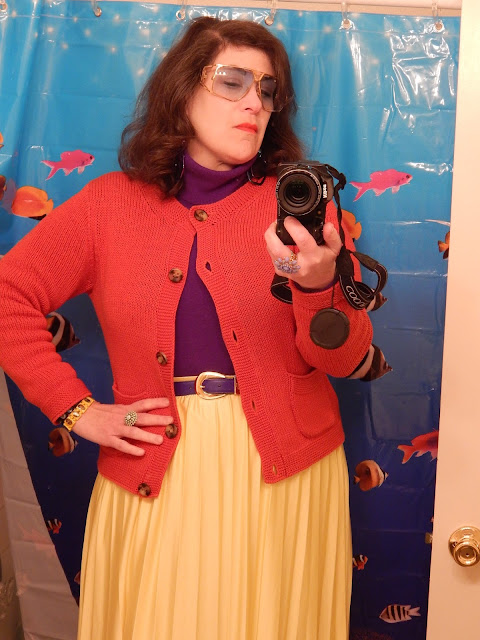 Colour blocked, anyway. I couldn't face the January bleakness this morning without a jolt of brightness. Orange, purple, and yellow might not be an obvious combination, but people kept telling me how well it worked. I wouldn't want to be quite so colourful every day, but it certainly filled a need today. Pow! 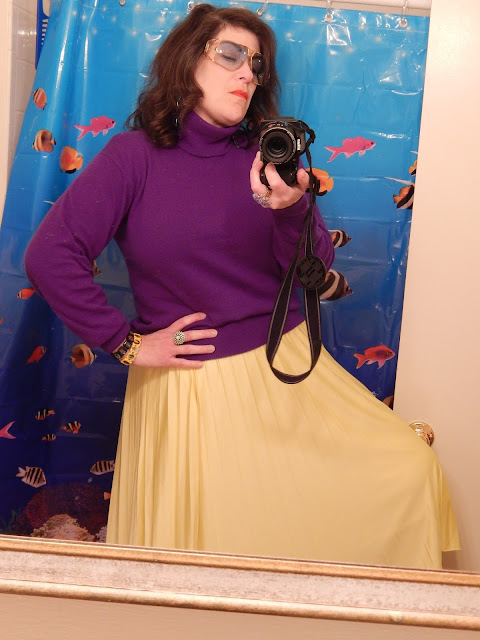 A colour combination I'd never wear in Chicago as I would be accused of supporting the Minnesota Vikings. My dad (not a football fan at all) once bought a hat with the colours and team logo on it only to have a customer pull it from his head and replace it with his own Chicago Bears cap. people take their football seriously in the Midwest. We don't have a pro football team in Nebraska, so I think I'm safe. 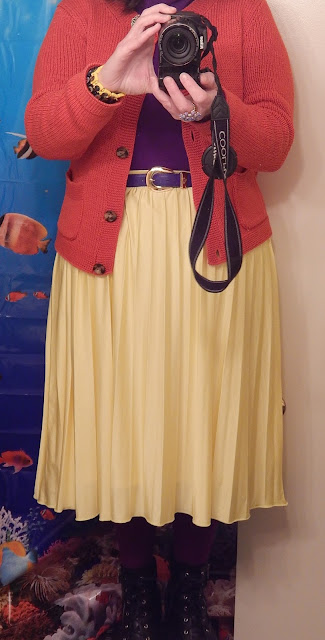 By happy coincidence, I own a cashmere polo neck in the exact same shade as my tights. Obviously, that means wear them together. As the kids say, "That's a no brainer", or "Duh." I don't do a lot of solid colours in combination, but I would definitely wear this one again-such a mood lifter. 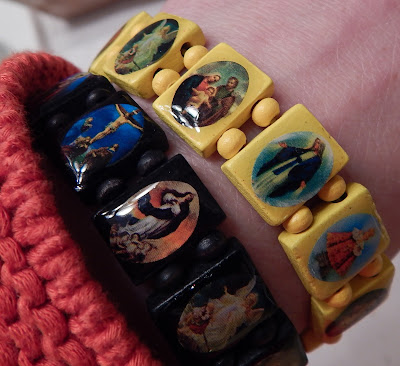 Religious tat. I found these at the K Mart in the Latino neighbourhood. As they don't carry this sort of thing at the other location, I'm guessing it was a deliberate marketing decision. The beads are wood with the images glued on, and shellacked over.  I have a weak spot for this sort of thing  and was excited when the Vatican started selling images of the artworks in their collection as notecards and necklaces. I have a few, and if you like Renaissance art, I suggest you keep an eye out on eBay. These bracelets from K Mart aren't anything spectacular, but they were $1.99

I can't remember for certain, but I think this brooch came from an antique store in Salem Massachusetts, but it might have been Marblehead. I bought two similar pieces that day (likely from the same collection) but I can't remember what happened to the other piece, which I recall was on wood. Something made me think it was Russian at the time, but today I'm less sure. It might have been a tourist item, though at that time very few American tourists were headed to Russia. 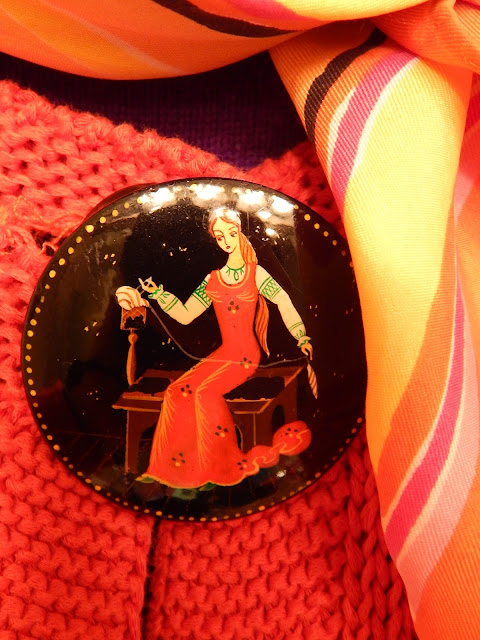 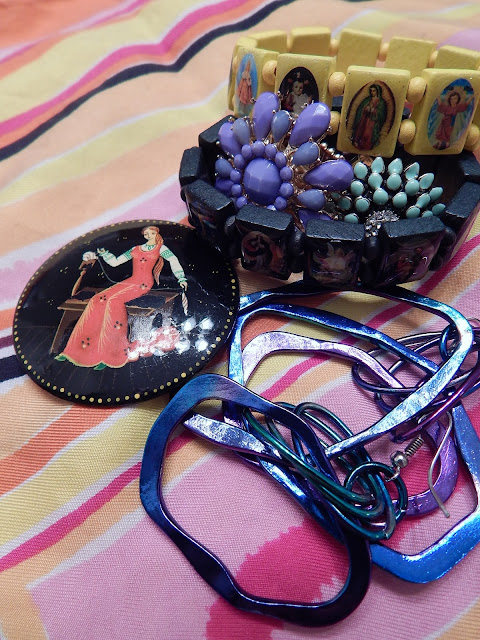 As evidence the 80's never really dies, I have these earrings purchased a couple years ago at K Mart. I wore stuff like that in the 80's with oversized sweaters, leggings, and ankle boots. These days, I stay away from leggings, but who could resist clanging, dangling, metallic earrings. Not I! 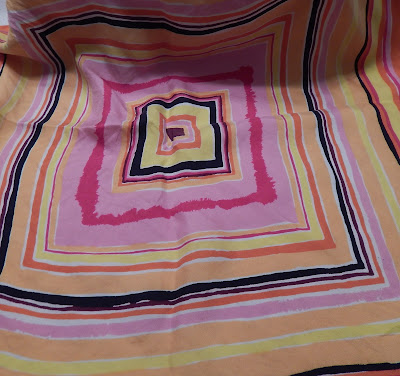 Danny thought this scarf looked "vaguely Vera-ish" (I don't agree, but eh, whatever) and bought it as stock for his upcoming shop. As mother of the proprietor, I get to plunder the stock for free. I'll give him the buck he paid for this one, but the colours go with too many items in my wardrobe it let it go. 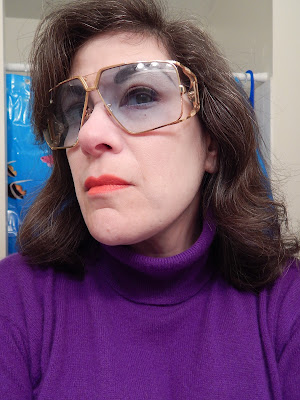 I stopped in at Hand-Me-Ups in their second location today and found a French tapestry that I believe was a tourist item in the 50's. I might have let out a little cry of happiness at that. I like nice things, but I loathe paying for them. If I wait long enough, I find them in the thrifts. I also found a few nice wooden bangles with mother-of-pearl inlay. I do like the way wood can look with summer clothing so perhaps it will be a good luck talisman of sorts to get us through this terrifyingly cold week we have ahead. I should be used to sub-zero cold by now, but it can get difficult to comprehend when the numbers fall too far. We have all manner of warnings in place for tonight and tomorrow, but the rest of the week doesn't look much better. That's OK-I have my chores sorted, and I don't need to leave the house for at least a week. Last evening I baked wholemeal biscuits, and if the weather keeps up like this, I'll just keep baking. Take that, Mother Nature! I also bought a few pounds of limes, so I see some marmalade making in my plans as well. That should keep the house warmed up nicely.

Update: I wrote this post late Saturday night, and it is now Sunday morning. We've reached -40 degrees F windchill which is the same as -40 degrees C. I suppose that's some sort of achievement. Oh, I know the Canadians are laughing as they get that for real temperatures, not windchill but I'm not cut out for this sort of thing. The sun's shining though, that's something.

Second Update:
I went outside briefly. they weren't exaggerating! Ugh. I really don't know why I'm not spending my winters in Florida. I need to look into that.

The Kmart in Sonoma had a Latino section in their 'ethnic foods' aisle and even a small aisle dedicated to Santeria stuff. I always thought that was odd because the entire Spanish speaking community of Sonoma shopped there and/or hung out in the parking lot. I never saw any jewelry directed at the Hispanic clientele. Often various ethnic delicacies were on sale out of the back of cars in the Kmart parking, from fresh chicarones, papusas, & the best tamales you'd ever tasted. I miss my tamale lady at Kmart. She sold every type of tamale from frijoles to pork to pineapple. Pineapple + cilantro + cinnamon = YUM.

That pink scarf is FABULOUS. We saw your legs in red tights Xmas 2014 Ms Goody, those were some gorgeous gams! Don't be telling us you can't wear leggings.

That brooch looks a bit Greek or Eastern European to me. Perhaps I'm just associating the motif of a woman holding a spindle sitting at a spinning wheel with Arachne, although Athena is portrayed spinning quite often also.

Brrrr it sounds so cold where you are!

That colour blocking looks great. I went to Russia in 92, literally just after the fall of communism (I went to communist youth camp, but there were very few young people there) and there were some Americans about even then. I got a lacquer brooch at a market, there were things like that on sale for tourists.

The blocks of color are an answer to my prayer -- "somebody, somewhere do something to warm me up, please!" (And in that first power shot, we also get a glimpse of how you'll glow if you decide to cover any stray grays with an auburn rinse.) We, too, are experiencing minus double digit temps. In addition to the seed and apple offerings for the birds, and kibble for the neighbors' roaming barn cats, I'm setting out "bacon bread". Actually, it's more accurately labeled meat-grease bread -- stale bread plopped into the skillet or broiler pan to soak up the grease, then tucked into ziplock bags in the freezer until needed by the critters.

The wood block jewelry has the weight to balance the blocks of color. I've a Russian music box with figures similar to the spinner. Perhaps this is Greek a la Russe? Your mum's bold glasses frame also holds the strong clean lines theme, aren't you glad you kept them?!

I've places to go and things to do, now I'm off to apply the layers required for survival, beginning with an extra slather of face cream.

Kind of like a Dead concert-the real party is in the parking lot? We have a thriving Latin community here, though the politicians and rednecks are doing everything possible to make them feel unwelcome. We wanted to move to South Omaha, but we just couldn't find a house we wanted to buy at the time and ended up here as a sort of stop-over. We're still looking now and then, and when the bottom falls out of the housing market a second time (and it will) we might start looking again in earnest. It is a great neighbourhood. I already told Mr. ETB that when Danny moves out, I'm never cooking again and taking all my meals at the various taqerias along 24th street.

@Bibi
Communist youth camp? Wow. That would get you on all sorts of watch lists in America! I can't help it, but I have the mental image of people roasting marshmallows over a fire and singing the Internationale. Was it like the Girl Guides/Girl Scouts with different ideology?

@Beth
For the record, I look awful with red hair (been there, done that).

I have some duck fat left from Mr. ETB's birthday dinner-I'll try the toast idea with it. We have suet out but the only birds that partake of it are the woodpeckers. It could be that they chase all the others away (they're sort of mean). I have safflower, sunflower meats, and nyjer as well, though the yellow finches are the only ones to touch the nyjer. I even saw robins around last week, though the raisins they like would freeze to the feeder right now.

Have you tried those metallic looking sock liners? They're my new favourite way to keep warm.

I have several of the religious bracelets, mostly purchased in San Francisco's Mission District. They go with everything. (They do too. Shut up.)

@Curtise
Colour blocking can get boring after a bit, but once in a while it is an easy way to wear things together I wouldn't otherwise.

@Propagatrix
The DO go with everything. They're ART.

Heh, I'm the Communist youth camper. Our local (county council) youth centre was ran by a lady named Lynn, who I suppose was a bit of a hippie and had a gift for seeing the best in - and getting the best out of - absolutely any kid, even the smoking, truanting types. A group of us did fundraising activities for the year and (I think there were also grants involved) did an exchange trip with some Russians. Amazing experience. Youth camp was out in the forest, with canoeing and forest walks. We were only there for a couple of days, the rest of the time we were in Saint Petersburg. I had my first taste of vodka there ;-)

I've been to Cuba too. I worry I'll never get let in to the US!