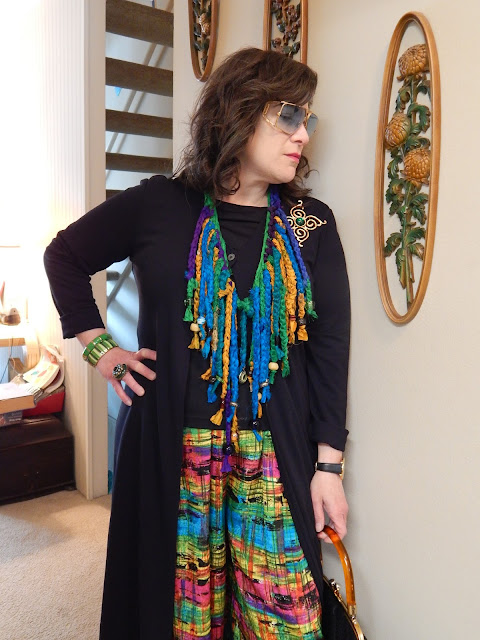 "You're not really going to buy those, are you?" Danny asked with a combination of fear and admiration in his voice. He needn't have asked as he knew damn well I would be buying the silk culottes and the matching top. For $1.97 cents at New Life Thrift, someone's home sewing project from the 80's is now a cheerful addition to my drab mid-winter wardrobe. I do love a pair of big pants!

I love New Life Thrift as I always see the strangest things there. 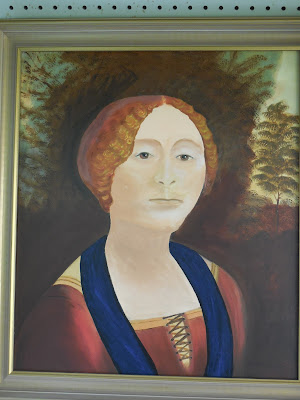 This looks like an earlier attempt at art restoration by the woman responsible for this... 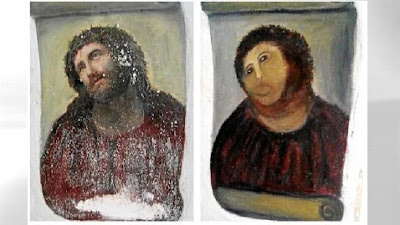 Similar technique, no? I didn't buy it. I did however buy a designer, 1980's puffy gold lame full-length evening coat that I intend to use as a cover-up at the pool when we're on holiday in February. New Life Thrift is easily one of the best thrift stores in the US, and worth a trip to Nebraska. Because of the proximity to the Air Force base, you get things donated from people that have lived all over the world. There's some really strange stuff, and the book selection is incredible. OK that's my unpaid plug for New Life Thrift. I don't work for them, I just love the place! 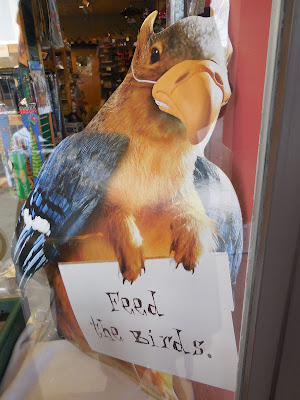 I stopped to buy birdseed, and saw this in the window. Obviously, they know our Blondin. 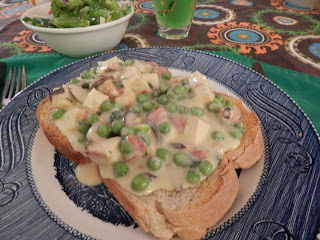 Danny's still cooking supper on Friday evenings, and this week we were treated to a lovely tofu a'la King and a salad of winter lettuces with an orange chili dressing. The tofu was first baked, and the mushrooms, peppers, and peas do get cooked in a sauce he had to make with a roux. I was impressed. The original recipe called for an entire cup of heavy cream, but he thought better of it and used 2% milk. You can over-do a good thing. Anyway, A+ for this meal, and extra points for enriching the sauce with an egg yolk and not turning it to scrambled eggs. 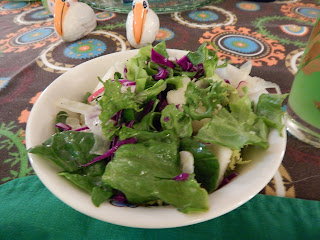 We like shaved fennel bulb and red cabbage in winter salads to add a bit of interest to the lettuce and watercress.

I ate my share of a'la king foods as a child because my mother's idea of cooking was either sticking things between two slices of bread, or over toast. Salmon and peas always felt indulgent as tinned salmon was still a bit of a luxury item then. Tuna worked too, but we never, ever, had tofu a'la king. 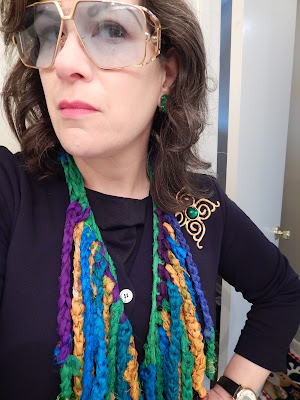 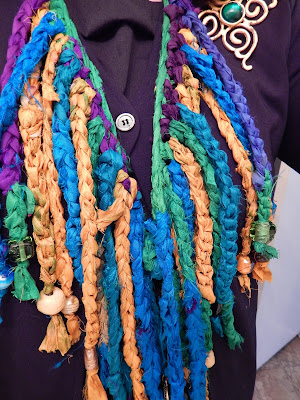 I'm a big woman, I need big necklaces and brooches. And specs. 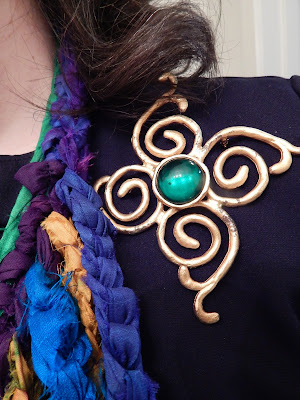 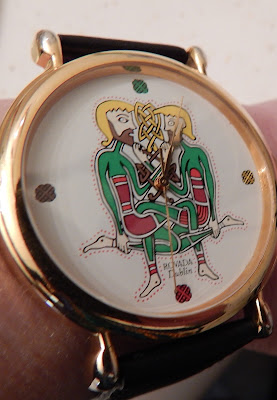 This watch never fails to get comments. It is huge and clunky, but I love it. 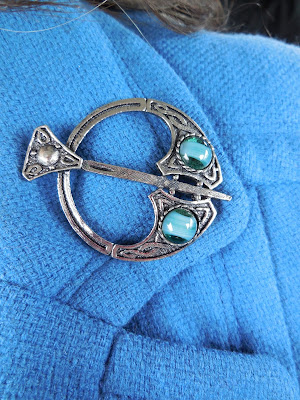 The brooch is in one piece. I had a beautiful one in two pieces, but I lost it. I'm still not quite over it either. I lost it at the library, and kept checking the lost and found hoping someone would turn it in, but no. I hope the bastard that found it stabs themselves through the heart with it the person that found it enjoys it. 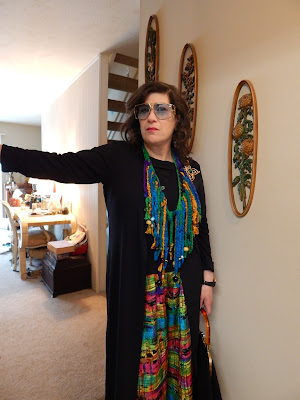 Anyone have plans for Monday? I'm in charge of the veggie haggis and the bag-piping records (yes, I have some) and Danny will be reading the Ode to a Haggis. Our neighbours are used to seeing this on the door each year, but it still gets strange looks from people new to the neighbourhood.  Sometimes I put on a Groundskeeper Willie accent just to screw with people. 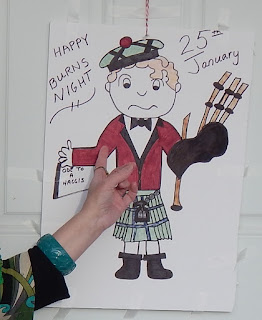 I'll leave you with a bit of Scottish rage at the cost of neeps in our supermarkets. Two and a half dollars a pound?! We're having parsnips instead. Thank God whisky is affordable!

Oh wow oh wow I love that outfit, look at all the glorious colour!! I love that look on you. I too hope the person who found your brooch stabs themselves, I mean enjoys it. It is good that Danny has a turn at cooking supper, so good for lads to be able to look after themselves.

$2.50 for swede? Ay caramba. We've already had our haggis, we always have it at New Year. No idea why. We do have whisky, though, if we need to celebrate Burns Night.

Danny's cooking looks great. He's so clever in the kitchen.

OMG! Don't you look like a sexy biatch with that wavy hair and oversized-glasses!!

I love finding silk clothing at second hand stores. But I always dither on how to wash them. Some washable silk from the 80's will handle a gentle hand-wash. Some has to go to the dry-clearners.

...I would have snapped up those culottes too!! You got an incredible bargoon!

What a gorgeous outfit! The contrasts of the bright colours is lovely and the brooch, necklace and watch are fabulous. You look like the dog's whatsits!

Swede is really cheap here in the UK as are most root vegetables. I think that's what most people have on Burns Night - just as well because I haven't seen a turnip for yonks!!

I AM SLOBBERING ALL OVER THE KEYBOARD OVER THE MERTE THOUGHT OF A GOLD LAME FULL LENGTH EVENING COAT!!!
You know how I get over anything metallic & wearable.
I have some velvet beaded & embroidered coats to go over my Bollywood ensembles. but a gold lame full length coat? Oh, I would so love that.

Danny's becoming quite the gourmand.
Brilliant choice on the substitution of dairy products, Danny!
In the spirit of "jugaadi" (a Hindi word that roughly translates to - makeshift, or make do with whatever you have on hand) I have substituted 'toned' milk from various animals (cow, goat, water buffalo) as well as reconstituted powdered milk in savory sauces requiring heavy cream or yogurt with excellent results! We certainly can't get heavy cream here very often, and the yogurt can be a bit of a watery mess. If you are worried about the milk, cream, or yogurt 'splitting' and making your sauce a grainy mess - a good trick is to stir in a pinch of flour, corn starch, or sugar per cup of dairy to prevent splitting. The mixed in carbohydrate stabilizes the protein so it won't 'curdle' out.
Scottish Gurkha bagpipers from Kalimpong : a piece of Scotland in India! (Most gurkhas are from Nepal but these are from the Himalayan region of Sikkim.)
https://www.youtube.com/watch?v=GIHHaEsJ1eI

@Sue
I was thinking of you when I put this together-I learned everything I know about splashes of colour from YOU!

Danny should teach ME how to cook-I just ruined a roast I was going to make for Mr. ETB. I guess that's what happens when you let the vegetarian cook meat.

@Thrifty Parka
I hand wash most things, or use a dry cleaning kit for the tumble dryer. Fresh air works for things like leather if it needs it, but yes, I've ruined things too.

@Veronica
I ended up buying a few small turnips, and a large swede (or as we call it, a rutabaga). Roasted together, maybe no one will notice.

@Bibi
I'm debating whether to post it on my dress form, or make you all wait for the holiday pictures.

OK, I'm hearing bag-pipes and Ravi Shankar...what an interesting life you lead out there in Omaha, swanning about in a gold lame evening coat! But $2.50/lb for neeps?! Gads, one hopes they're a sweeter swede that the great lumps of stock food raised here in the Midwest.

The design of the brooch has exactly the right energy level for the culotte combo -- but what is the story behind the design of the watch? It's really a converstion piece.

@Beth
I believe the design is taken from the Book of Kells, but why the beard pulling is anyone's guess. So many of the figures are either fantastical animals, or human bodies worked in Celtic knots, etc. that don't appear to have anything to do with the gospel.

The turnips and rutabagas aren't anything special, and they wax them, then store them beneath the produce misters causing them to rot even faster. It makes no sense, but I guess this just isn't a root vegetable part of the country, and they don't know how to deal with them. Like everything else-if I want it done correctly I'll have to grow them myself. A baby neep correctly cooked is a thing of beauty.