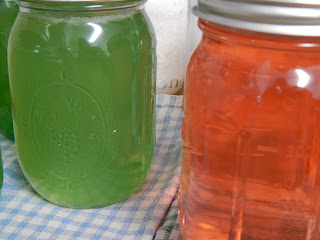 When life gives you bad weather, stay home and bottle some sunshine.

Do you think a city should grind to a halt over three inches of snow? Neither do I. Yesterday, the police had so many stranded cars on the uphill section of Dodge street next to where I live that they finally shut the street down so cars could be pushed-towed, and ploughs brought in to clear the snow. The mayor (who is facing a boatload of criticism over the ploughing, or lack thereof) is doing her best to blame everyone else (again. This is the THIRD time this season the city was unprepared ) and the Chicagoan in me is watching this unfold and thinking, "I know how this is going to end because I've seen it play out before." Mayor Stothert, meet Mike Bilandic . Don't underestimate snow as a reason to be voted out of office. Anyway, the roads didn't look much better today, so we stayed in and made some "Toast Perfume."

Lime jelly with star anise, and Lemon, lime, rosewater, lavender, and vanilla (which smells suspiciously like Shalimar). I think we have potential State Fair material here, but we'll want to experiment a bit. These were both small batches for the research and development stage. I have some Earl Grey/jasmine tea/vanilla/rose steeping for tomorrow. We take our State Fair entries seriously around here. 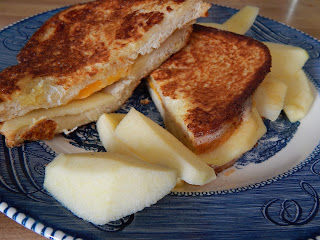 Bottling is hard work, so for lunch there was a sandwich I call, "Apples and Friends" which encouraged Danny to eat different foods when he was small. If I gave something a silly name, it made the meal more attractive. Apples and Friends is little more than apples and cheddar on buttermilk bread. The whole thing is dipped in egg and milk (like eggy bread) and fried in a bit of butter. That will get you through a cold winter day. The rest of the apple was cut-up and served on the side. This isn't Instagram, so I didn't bother cutting perfect slices of apple. Real life here.


The finches get a good meal at our place as well. They've discovered the sunflower seeds where they previously stayed on the nyjer feeder. Adventurous eaters, I guess. 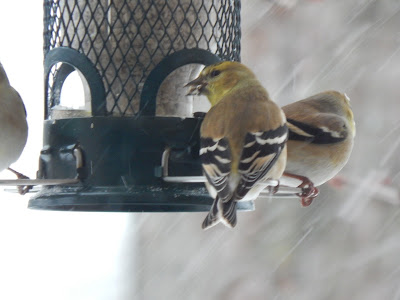 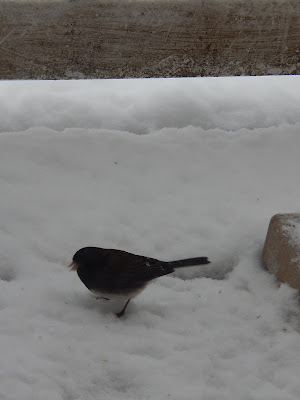 The Juncos will eat just about anything, as long as it is on the ground. 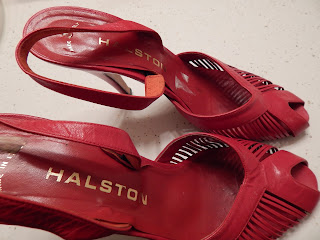 I didn't photograph them on my feet as I was taking my photos in the mirror today. These shoes+Step stool=trouble. I'm not looking for a broken hip, so here's a photo off-foot. 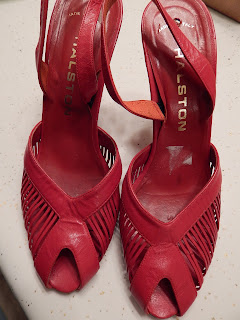 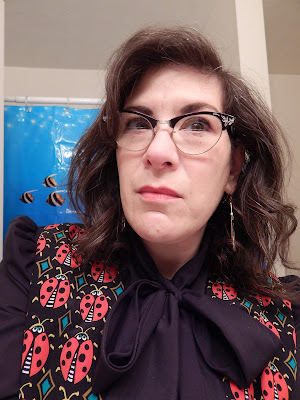 I fell in love with this ladybird waistcoat, and for a dollar it would have been silly to leave it-but it really doesn't fit. Much as I hate to, the ladybirds need to fly away home-to someone else's home. 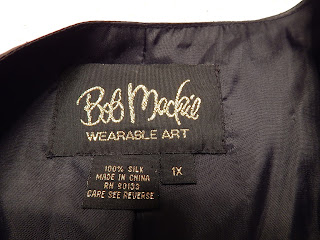 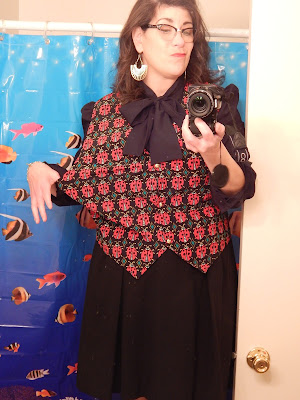 Good luck finding someone with a bigger rack than mine to fill it out. I rarely have trouble with clothes being too large on top. Ah well, I could take it in, but that's more work than I have time for. Being as memorable as it is, I think this is a "single-wear" item anyway. 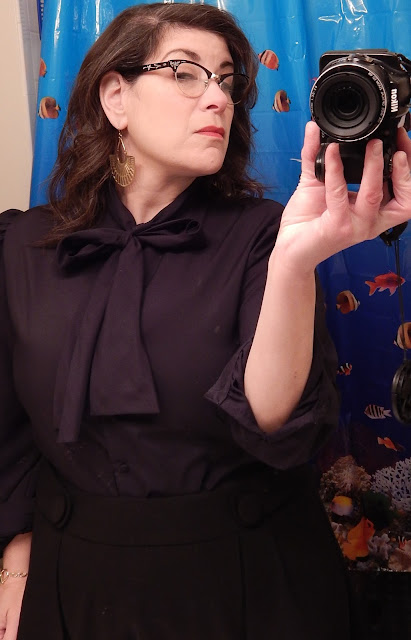 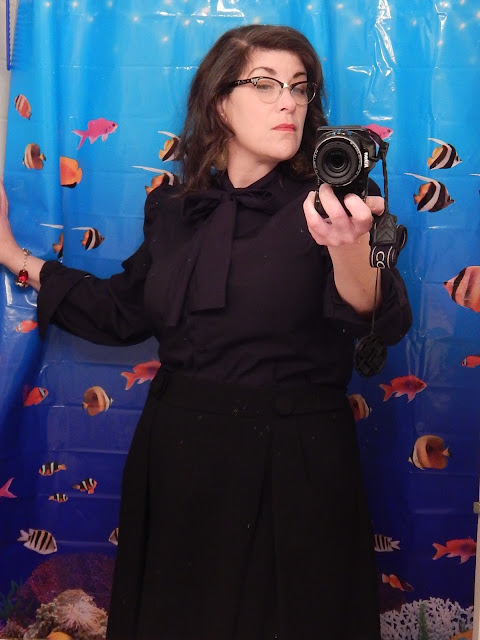 I carefully washed the mirror less than twelve hours before taking these photos. Boys! How? What? Arrg. Anyway, ignore the spots on the glass and admire the unwholesome goodness of a vintage polyester pussy bow blouse. Let us now praise the Triacetate.

Are you old enough to remember the label, Fire Islander? I am. They made nice clothes, but they went the way of Ship and Shore. I've sewn the buttons back on this blouse more times than I care to remember, but that's the thing with vintage-you need to carry a mending kit in your purse, but you're rewarded with pieces you don't see on every other person walking around the city.

This shower-curtain is soon to be covered with the Vera you're used to seeing. I needed a new liner, and this was on sale.

Fire Islander 1970's/80's blouse-Goodwill
Skirt- Sears, about 15 years ago
Halston shoes-Goodwill
Waistcoat-New Life Thrift
Earrings-K Mart
Gaudy Liz Claiborne bracelet-can't remember, had it for ages
Fragrance-Eau du Givenchy-The first twenty minutes can sear the membranes from your sinuses, but then it settles down, and I find it pleasant. But oh, that first twenty minutes! It was released in 1980, but to me it really smells like a 90's perfume. 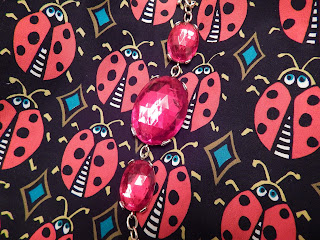 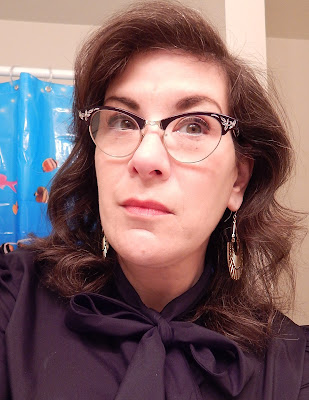 See? We made it to the middle of the week, Bonus happy news? The gardenia tree in the sunny window has buds. If that isn't a reason to smile, I don't know what is. I am too smiling. On the inside.

Oh yum. I want some apples and friends. I'll bet it smells wonderful in your house. I remember Ship and Shore but not Fire Island and I'm way older than you. Gosh Goodie, you always take me on these little trips down memory lane.

Those jellies sound divine! I just bought some Turkish rose jelly at our local departmental store, lovely with cardamom & lemon. (Our departmental store seems to stock whatever fell off the truck from Istanbul to Delhi.)
Bob Mackie made plus sizes??? A 1X? I guess you'd have to if you designed for drag queens, eh? I'm certain I have a big enough rack to fill that out, I usually take 2 sizes smaller on the bottom.
Those Halstons are divine!
My mom wore Fire Islander a lot. Alfred Dunner too. Ol' Al's still around though.
Let it snow!!!
It actually rained here last night, very unusual. Sunshine & blue skies today!

Bob Mackie's best work is the outfits he made for Carol Burnett's "Mrs. a-Wiggins." The character walked that way because the skirts were so damn tight.

Well, I'm so pleased to hear the England isn't the only place in the world that grinds to halt when a bit of snow appears! It's on the news all day and people act like it's never snowed in England before - it's plain daft!

The jellies had me dribbling! I would love to smell them....The 'apples and friends' sounds delish - cheese and apple are a lovely combination.

Your shoes are amazing and such a lovely colour - they match the ladybirds. It's a shame you have to relinquish them but hey it clears a bit of space in the closet. I'm about to bin two flared skirts, having seen a photo of me in one of them has made up my mind!

I feed the birds too, and our tits (blue and great) love the sunflower seeds as do the sparrows and the dunnocks.

@Connie
That's funny because you look waaaay younger than me!

@Bibi
I was more a Norton McNaughton woman than Dunner back when I needed to look sorta-presentable. I have another Mackie piece that's a jersey material jacket with sequins of course). They're nice clothes, but I get the sense they were made for the Home Shopping crowd, not the Pride Parade.

@Mim
He's had a really long career, but yeah, the ladybirds were sort of out of character for Mackie.

@Propagatrix
Agreed. Those gowns Burnett would wear for the monologue/meet the audience spot were rather amazing too. And of course, the Scarlet O'Hara dress, which still cracks me up, even though I know what's coming.

@Veronica
I had to ask my son the birder what a dunnock is-we don't get them.
Don't know if you're interested, but the Great Backyard Bird Count is Feb. 12-15 this year, and it is an international effort. If you have active feeders, you might want to participate. The website is gbbc.birdcount.org

Well blow me down! I didn't know there was an international bird count day but it makes sense! Thank you for the info - ours is the last weekend in January and I always take part. My middle grandson and youngest grandson usually help me with it, too.

Dunnocks are pretty unimpressive birds but they have an interesting sex life...apparently they have menage a trois with 2 males and 1 female. They were studied by a British POW, in Germany, I think during the second world war and he published a paper on it after the war was over.

Those Halstons are death traps, luring one to just slip them on long enough for a quick dance step or two...which is probably why they're in such good condition, n'est ce pas?

I think you're on to something with the teatime jellies! A flaky biscuit, a blob of real butter, a pot of hot tea -- and to think I've been content with a jar of orange marmelade.

My bird buffet is in full operation, now that we've got snow cover. Trail Mix for the jays and cardinals, oil seed for the brownies, and suet cakes for the 3 models of woodpeckers are on offer. The red-tailed hawk and I have been staring at one another as we review our menus.

@Beth
I haven't had any red tails in the tree, thank goodness, but we seem to attract Coopers hawks. It takes quite a lot to shoo them off! They probably think you're putting out the spread to attract songbirds for their dinner.

I'm going to take Danny this week to see the eagles building their nests as the DeSoto Wildlife Refuge. Hopefully I'll be back with photos to share. Last time we were there it was dozens of them on the ice, which is amazing as I think at one point the US was down to a few hundred breeding pair.