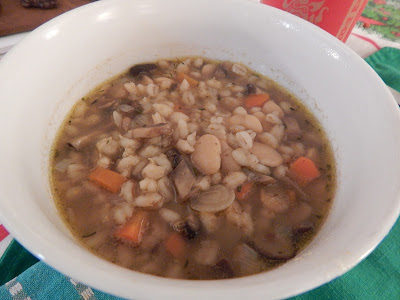 What's this? Recipes?! Been a while, hasn't it?

Sometimes I take for granted that everyone knows how to make a pot of soup, but judging by the aisle of tins at the supermarket, perhaps not. There's something to be said for convenience, of course but if you find yourself with some time at home, these are two recipes that don't require much work once everything is in the pot-just time.

Both soups are meatless, but there's no reason you can't add it and if you prefer beef stock, go ahead and use it. I grew up eating mushroom barley soup with cubes of beef salami in it, of all things (and it was good!) so feel free to experiment.

In a large, heavy pot heat the oil over medium heat and add the shallots and mushrooms. Cook until the mushrooms have thrown off most of their water. Add everything else except the stock and cook about 1 minute to coat the barley and carrots. Add the stock, stirring and bring to a boil. Skim if needed, then reduce the heat to simmer and cook about 1 1/2 hours or until vegetables and barely are quite soft. The soup freezes well.

When my mother made this, she skipped the brown sugar and used a handful of raisins in the soup. Either is fine, but my boys prefer the sugar. This recipe comes from Traditional Jewish Cooking by, Betty S. Goldberg

Toss the cabbage with the flour and set aside.

In a large pot, ovcer medium heat cook the onion in the oil until wilted but not browned. Drain the tomatoes, reserving juice. Chop the tomatoes. Add the garlic to the onions, then add the cabbage. Mix well and add tomatoes, juice, potatoes, carrots, and stock. Bring to a boil over high heat. Add the caraway, salt/pepper, and brown sugar. Reduce to a simmer, cover the pot and cook about 1 hour or until cabbage is very soft, Stir in the lemon juice at the end. Serve hot. This soup also freezes well. You can serve it with sour cream, or...Potato kugel and sour cream. Your choice of course, but I'd take the potato pudding. 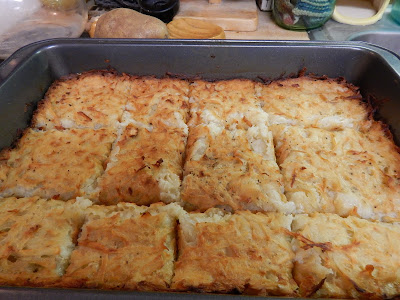 Heat oven to 350 degrees F. and grease a 2 quart baking dish.
Combine onion and eggs in a large bowl. Grate the potatoes into the bowl, and toss well after each potato-this keeps them from turning grey. Add the flour, oil, and seasonings. Pour into baking dish ans bake 1 1/4-1 1/2 hours or until top is nicely browned. Now, you're going to need the sour cream (or applesauce).


I don't know why I've got away from posting recipes, as I still cook every day. I'll try to make a point of including some cookery posts now and then.

Posted by Goody at 4:41 PM
Labels: Barley, Cabbage, Jewish food, Meatless, Soup, White Potatoes, You Want I Should Grate Potatoes For You To Eat Kugel

This looks so yummy! I've just within the past few months gotten back into cooking after a long hiatus. It's a long story. Needless to say I've got a spoon in my hand and I'm raring to go. I love your cooking posts. Keep 'em coming!

@Connie
Taking a break from the kitchen can make it more interesting when you go back. I'm glad you found something that sounds good. Happy New Year.

Ooh, we've been looking for a cabbage soup recipe. (One of the problems with getting a seasonal vegbox is that we get gluts of things.) Thank you for sharing.

I haven't had potato kugel in years. Must make soon!

@Propagatrix
If you have a food processor it makes quick work of it.

I'm meditating on the assortment of mushrooms here. Is this being frugal -- or is the combination recommended?

@Beth
We have a fantastic Asian market just down the street where I can buy all the exotic mushrooms I want for the price of plain supermarket ones. With soup, shiitake mushrooms hold their texture better, and have a stronger flavour, but obviously we didn't have that sort of thing in Chicago in the 60's, and my mother's soup tasted delicious with tinned mushrooms. I say use what you have, but if you can get fancy fungus, it does add a bit of depth to the soup.