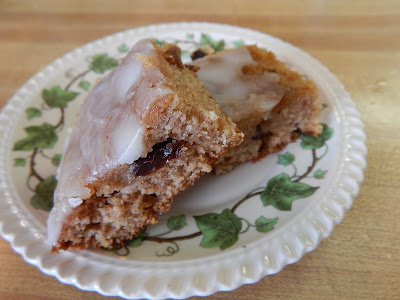 Update:
I wasn't going to post a photo because they're not terribly exciting looking, and I didn't want that to put you off the recipe. I did however find myself forced to eat these two pieces after snapping the photo because I wouldn't want to waste. Look how I suffer for you guys!

They cut neatly into squares, thus they are called, "bars" but to my mind, this is cake.


Once in a while I bake something that is so good I want to bake it over and over to make up for all the years I didn't know about it. These raisin bars are that good. The recipe comes from Better Homes and Gardens All Time Favorite Cake and Cookie Recipes, 1980.

This is basically a very light spice cake with raisins. I haven't tried it but I suspect it would do well with dried cranberries or sultanas. I also suspect using half brown sugar would give it a richer flavour, but I haven't tried it. I feel I should warn you that because this cake is deceptively light it is easy to accidentally eat more than you intended to, Without the icing it would make a wonderful weekend breakfast bread topped with whipped butter and maple syrup. I rarely get excited over "bars" but these are exceptional.

Instead of using the cinnamon, nutmeg, allspice and cloves called for in the recipe, I went with two teaspoons of mixed spice. I'll post the recipe as printed, but know that the mixed spice worked quite well here.

In a saucepan combine raisins, and water. and bring to a boil. Remove from heat and stir in oil. Cool to lukewarm. Combine raisin mixture with egg and sugar and mix well. Combine with dry ingredients and mix only until moistened. Pour into prepared pan.

Bake 12-15 minutes or until it tests done with a toothpick. Cool in pan on rack. Store with a piece of foil over the pan at room temperature. I have no idea how long it will keep because we tore through it quickly.

Optional Glaze:
While cake is still warm in pan, combine 1 cup icing sugar with enough water to make a thick paste. Pour onto cake and let stand a minute before spreading evenly.

Are these bars or cake?
The recipe almost looks like it is for Hermits.


What, no pictures? I bet you ate them all!

@Bibi
To my mind, it is cake, but the cookbook calls them bars. It does cut neatly into squares, but it is very light. I don't think it would travel well in a lunch sack.

@Veronica
I almost DID! There was a small bit left to get a photo though.