When I purchased this dress online, it was listed as a, "Day Dress." When it arrived, after looking over the raw seams, cheap plastic belt, and poorly sewn-on buttons (on a dress that is new old stock) I knew immediately that it was in fact a, "House Dress." At least that's what it would have been called when I was growing up. So what's the difference? Quite a bit, though I wonder if today that distinction has been lost.


A house dress is exactly that-something to be worn at home whilst doing housework. Often cheaply made, and easily launderable they were inexpensive cotton dresses that would be appropriate enough to answer the door, possibly sit in the garden and chat with a neighbour, or fetch a sick child home from school-but not nice enough to do the marketing, go to the bank, or any chores outside the home. For that, you really needed a Day Dress. 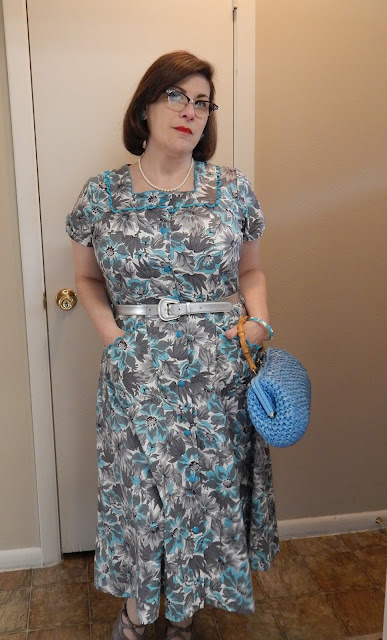 Of course in 2016 you can do the school run half-naked so who the hell cares if your dress has unfinished seams? 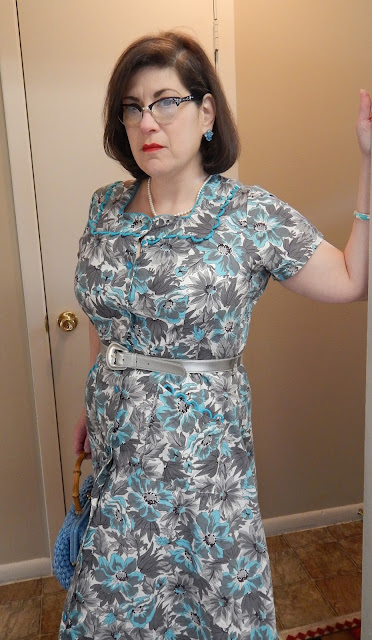 I don't feel the dress was misrepresented-it is still a nice enough cotton dress with cute trim that I will absolutely wear outside the house, but I do think there's a lack of understanding today about what would have been appropriate wear for what occasions. To someone that cares about dressing period correct, it could be an issue. 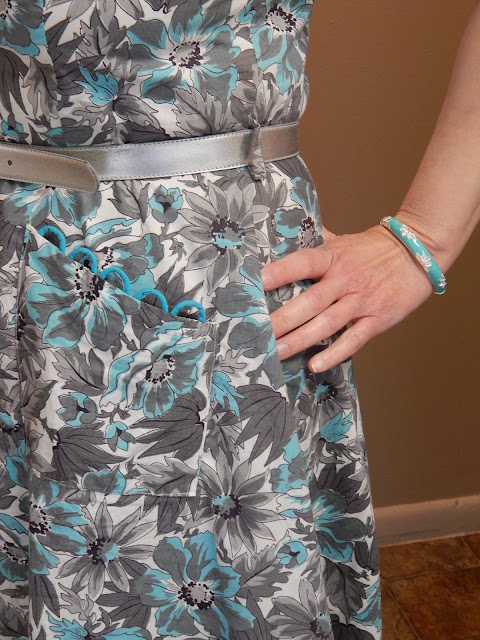 I also don't think this is a 1950's dress. Maybe very late-1959 but....no, I remember dresses like this being sold at places like Woolworth's in the 60's and early 70's. House dresses didn't change much in style after the late 40's, and the plastic buttons and belt (not shown) really scream 1960's to me. The pattern strangely enough is one that we had on bath towels in black and white when I was growing up. The dress is made by undergarment maker, Fruit of the Loom. Again, I don't really care about the date of manufacture, and I like the dress, but someone else might be disappointed. I purchased it from a reputable dealer, and I do think it was an honest mistake. I also acknowledge that I can be wrong as well. Were I selling it though, I'd want to make certain to point out the inability to date this dress with any certainty. It would have been better to call it a "50's-60's house dress" than a "1950's day dress". I do understand why it didn't sell originally listed at $80.00. I bought it for a bargain in the sale. I was hoping to be able to give the vintage dealer a good review here, but because of these issues I don't feel comfortable doing so. I'm going to hope it was a fluke, and maybe I'll try something else from her down the line. Again, I don't believe it was deliberate, but someone selling vintage should be more careful, and she appears to have been selling for some time. 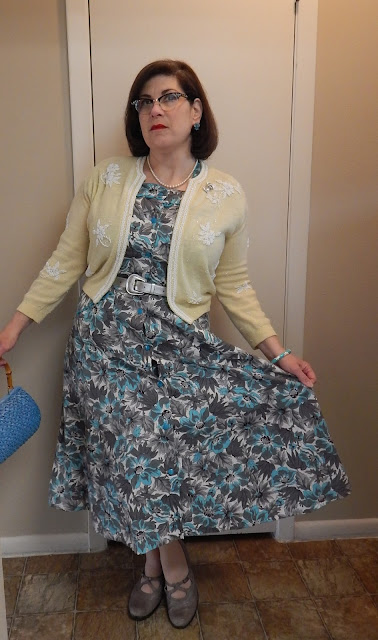 Of course today, it is perfectly acceptable to wear what you like, as you like, when you please, so I added a cardigan to the dress and a few accessories. Then, because I could, I shot sunbeams out of my mouth: 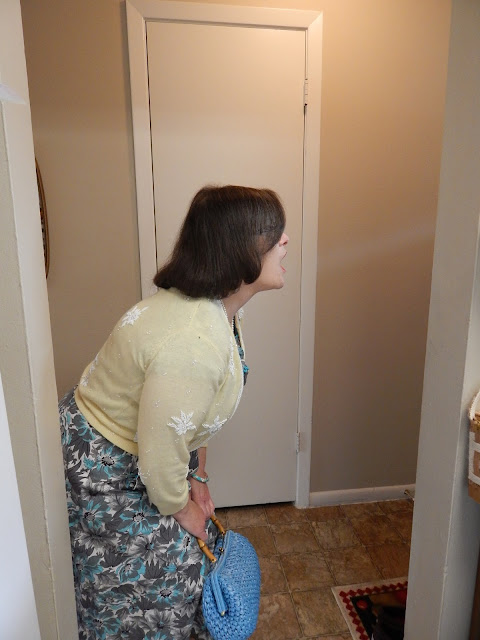 I am the wizard of awesome. 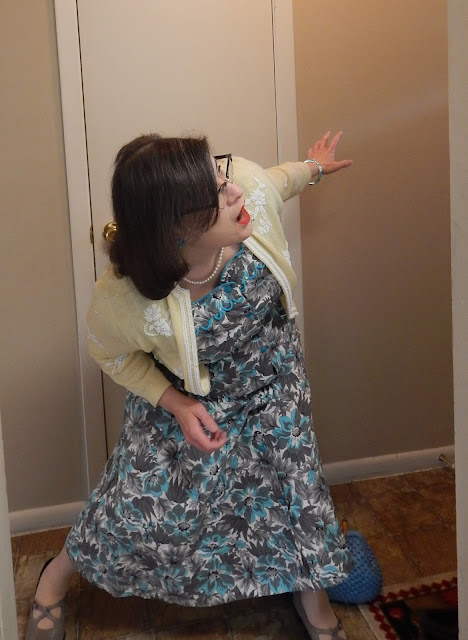 I wanted to try and get a sunbeam shooting out my behind, but I couldn't manage that sort of contorting today, and if I threw out my back, it would be really hard to explain how it happened. I still have some dignity. 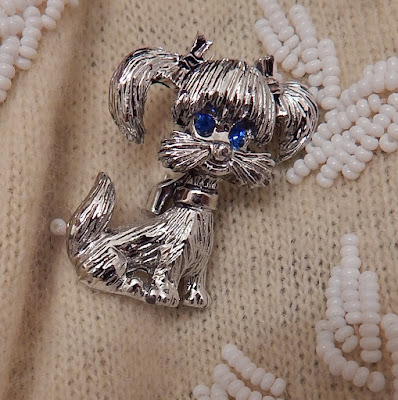 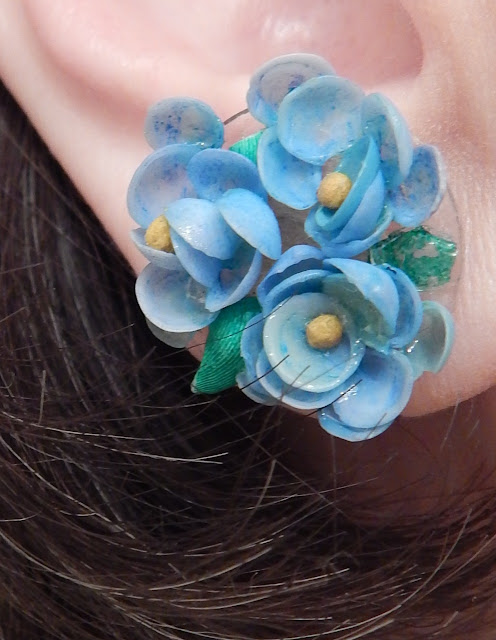 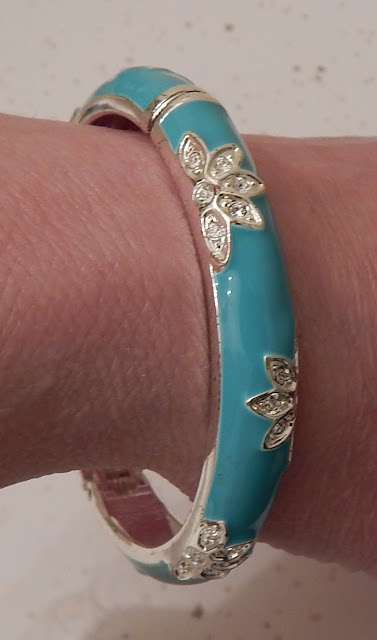 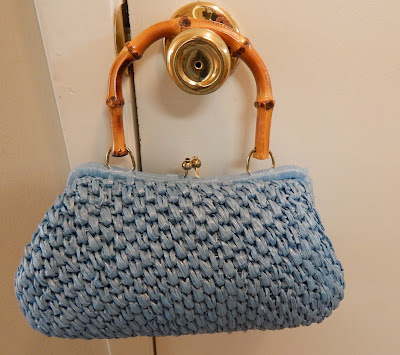 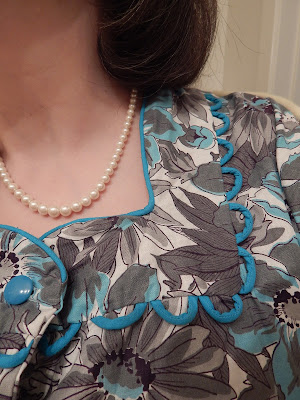 Do the particulars of what an item is called, or how it is dated matter to you, or do you operate by whether you like it or not? And most importantly, can you shoot sunbeams out of any orifices? I need to know!

Hmmm......
I would have the the "Fruit of the Loom" label would have been a dead giveaway that it was a "house dress" and would have been sold on a rack on the perimeter of the foundations & sleepwear dept.
That print looks late 60's to early 70's to me. We had a similarly printed wallpaper in the main bathroom in the early 70's but it was in hot pink, acid yellow, chartreuse, and kelly green. Remember when that acid yellow became a popular accent color with the 'earth tones' trend in the 70's? Fugly.
The teenaged Nepali girls here have latched on to the trend of wearing pajama pants all day and everywhere. Fugly.
Dignity is overrated, especially when you have the option of shooting sunbeams out your arse.

@Bibi
I sorta like acid yellow-with silver mirrored wallpaper in a bamboo print. Oh god, now I'm not going to be able to sleep until I find a few rolls of the stuff on eBay-imagine how cool that would look covering hat boxes.

Yeah, I have no taste. At all.

I only see house dress worn in nursing home here in Australia .There is new version comfortable wear for inmates in nursing home and very expensive ,I visit lady(friend of my parents) each week twice.The rest of inmates wear sports pants and tops.Nobody is going to play sport or do any housework,
You always manage to look good ,full of life and vibrance.
Thank you Hope

Well, if it's a house dress then it sure beats a onesie!
Did the seller mention the "Fruit of the Loom" label in the listing? If not then I'd say that she knew full well what that dress was and was deliberately trying to mislead. But it does look fantastic and accessorised to within an inch of it's life in the most perfect of ways. xxxx

Well, whatever it is the dress is lovely and looks great on you. It may be a house dress but you could (should you so desire) go to tea with the Queen and look the part! I love the bracelet and the bag and blue trim round the neck of the dress.

I haven't tried shooting sunbeams out of my mouth/arse - yet - but I once had projectile diarrhoea - does that count?

I like the dress, and think you've styled it with beautiful jewellery and a fab bag. So if you got a bargain (which $80 dollars would NOT have been...) then that's fine. However, I get heartily sick of sellers misrepresenting their items, though I only really shop online for vintage via Ebay. I can just about cope with the people who know nothing and only write "vintage dress" in their listing. But the sellers who act as though they know a lot, and give all sorts of authoratative information which is plainly wrong (date/fabric/condition/style) - those people get my goat! Don't know the difference between a 1950s dress and one made in the 80s in a similar style? Then don't claim you do!
I don't do sunbeams. From anywhere! xxxx

@Vix
I'm giving the seller the benefit of the doubt, and I do like the dress-I just wish people would do their homework before selling.

Oh, I think that *has* to count-just don't share photos.

@Curtise
You bring ALL the SUNSHINE.
I do wish people didn't feel they had to be experts about everything. I mean, coffee, clothes, jam or clotted cream first-everyone's an expert authority these days. It IS okay to say, "I don't know" but people think they'll lose points or something. Anyway, I do like the dress, and it didn't cost much, but I'm still a bit irritated.

I like the dress, and would never have guessed it wasn't considered nice enough to go out in. Details like the loops on the pockets ceertainly make it look more special than most modern nice dresses. That said, I'm not sure we had the house dress/day dress split over here; I've certainly never come across it in any of my old magazines. Perhaps I should reread them and pay more attention!

I do pay some attention to date on items, but try to confine it to whether I think that should affect the price. I'm trying to look at things and start by thinking 'do I like it?' rather than 'does this have the labels other people value?' (Yup, still working on developing the confidence to express my own taste.)

I cannot shoot sunbeams out of orifices, but I can manage some stunningly bad language should the occasion arise...

@Mim
I think because the UK was on rationing so long after the war buying a specific dress just for housework might have been impossible, and most women would just wear a pinny over a less-nice dress. In the US, we started shopping before the ink on the treaty was dry.

Fruit of the Loom. Really? Wow. I didn't know that they made clothes. I love this fabric. And it is a very flattering dress. You look so pretty. I would love to see you at school pick up. Honestly, if I have to look at another yoga pant butt I am going to scream. Namaste noooooooooooo.