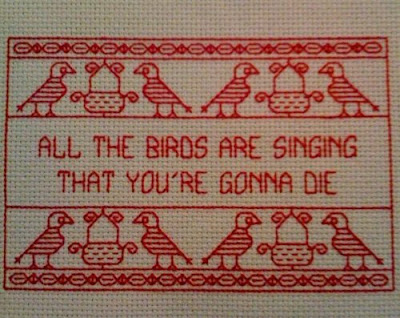 They start before the sun even thinks of rising. Four-Thirty AM and the robins are all,
"Hey you, good lookin' robin come over here."

This will go on (and on) for a couple months until they start nesting and finally shut the hell up. For the past few years, we've had a pair of robins that come to our platform feeder for raisins...and then attack any bird that tries to get within ten feet of it. They show up in early March and will be with us until around October. They aren't singing-they're guarding. Sometimes the male will just sit on our railing, watching the tree. He's gone so far as to swoop at Blondin the squirrel who ran off terrified of having an eye pecked out. Bluejays have the reputation as a bully bird, but trust me-those robins mean business! I wouldn't want to tangle with one when they're guarding their raisin stash. 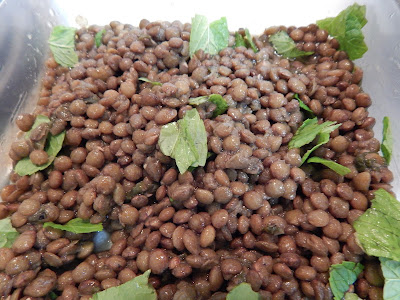 This is a terrible photo of a very good lentil salad. Served over a bed of lettuce with some toasted orzo, it made a nice meal for a warm evening. The recipe is dead simple:

Cook the lentils in enough water to cover by several inches with the mint and garlic cloves until lentils are soft but not falling apart. Drain well. Remove garlic cloves and mint. Mix together oil and lemon juice, salt and pepper. Toss with lentils. Serve warm or at room temperature with extra pieces of torn mint on top.

I told you it was easy. I've been making variations of this salad for years but the original came from the River Cafe cookbook, Green. I have made nearly everything in that cookbook (at least once) and I can't say there was anything I wouldn't make again. It is a superb cookbook, and worth buying if you're at a loss for what to do with vegetables. 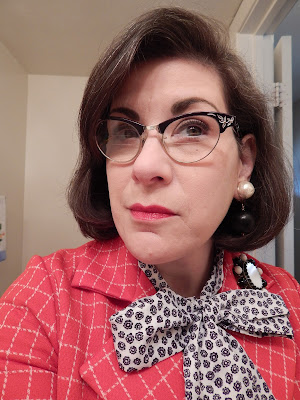 There are certain signs that tell you spring is coming. The birds sing early in the morning (see above), The first California strawberries show up in stores (I already made the jam), and I wear my red polyester suit. Later in the season, I'll wear it with blue accessories for a nautical look, but today I went for black. 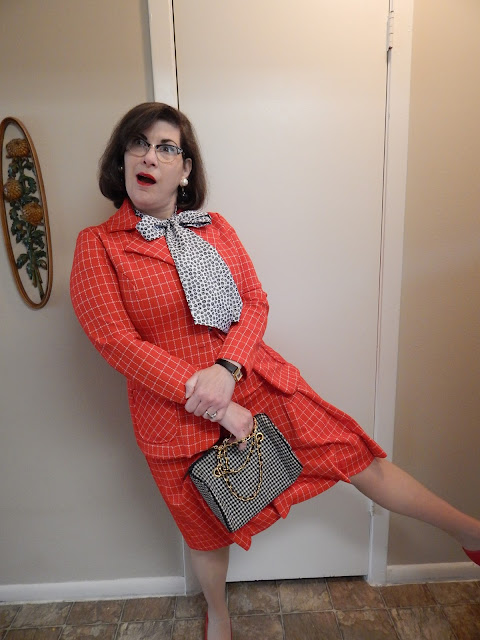 Why, it just make me want to kick up my heels and...whoaaaaaaaa...steady there. I need to sit down, that was much too much excitement!
Outfit Particulars:
1970's polyester suit-Goodwill (I think)
1970's pussy bow blouse-Goodwill
Richmark handbag-Goodwill
Vintage shoes-Goodwill
Earrings-Goodwill
Brooch-Hand-Me-Ups
Fragrance-Lentheric 12 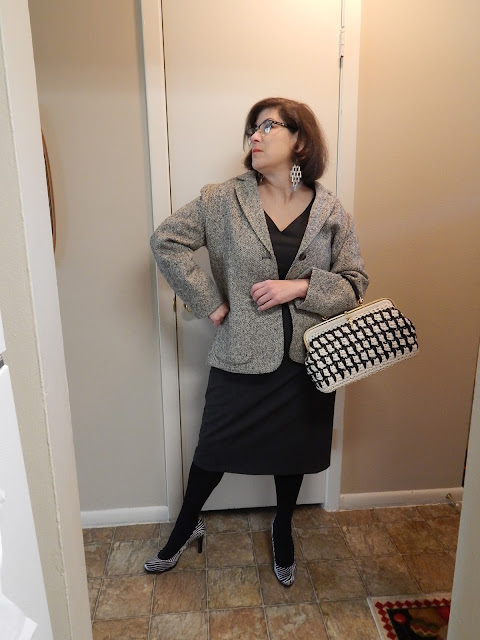 Yesterday, I wasn't feeling the springtime. At all. It was cold, windy and all I wanted to do was go back to sleep. I went to the garden centre instead because I'm an optimist. So we have more dirt, more bag beds, and some strawberry plants of my own. Oh, and I'm planting okra even though I'm the only one that will eat it. That's OK, every gardener should plant something just for themselves. 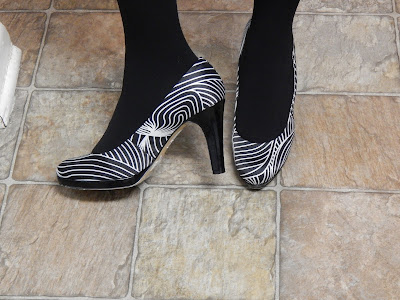 I binned the shoes the minute I got home. That makes it two pair this month, but I'm not willing to suffer over a $3.99 pair of shoes from Goodwill. I wouldn't re-donate them and subject someone else to that kind of pain. 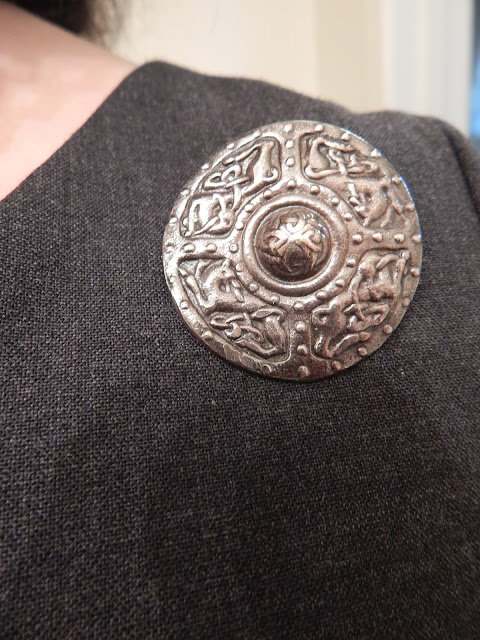 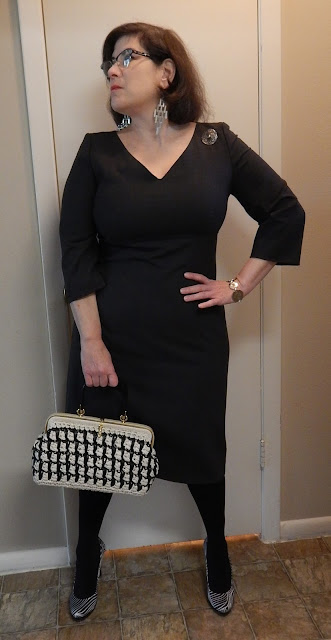 I'm going to try taking in the sleeves before I give up and bin the dress. With a more fitted sleeve, it might look more like a bombshell wiggle dress instead of an institutional matron. We'll see-there's only so much you can do with a grey sheath. 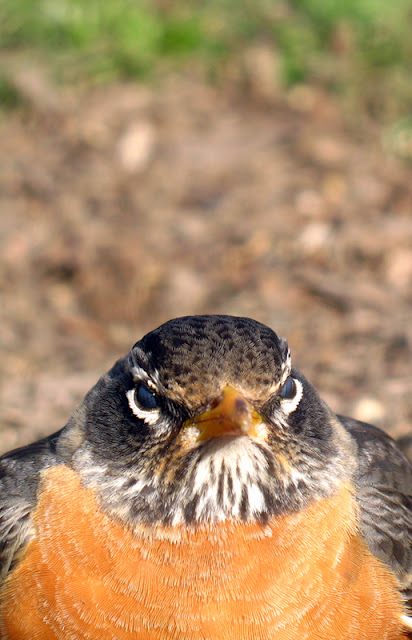 (Not my photo)
"Someone tell the human we're out of raisins again."

I hope wherever you are the birds let you sleep past four AM.

Whomever did that needlework needs their meds adjusted. Just sayin'

Nepal is bird paradise, even though we don't see as many forest birds as we used too - (sometimes modernization sucks!) - it's a bird-a-palooza here. We don't have a bird feeder but the Sheikh puts the left over rice on the roof every morning for the birds. I am being blasted this AM by about 45 mynahs fighting a war with 7 crows, 16 bulbos, 15 pigeons, & 20 finches of some sort in the bougainvillea over the carport. A woodpecker is knocking and some sort of bird is going PA-CHOINK PA-CHOINK loudly & repeatedly off in the distance. We even have birds that sing at night here.

What I really can't handle is my 24 yr old niece's non stop verbal diarrhea, she just asked me when I'm going to get a job. I am ready to crown this insufferable little snot who has never had a job nor even finished university & thinks she needs to tell aunty what to do. Time for Aunty Bibi's crash course in self awareness AGAIN.

That suit looks almost coral & absolutely fab on you!
I think that gray sheath looks great on you as it is, too bad the shoes are miserable as they look gorgeous.

Those robins look like they mean business! Ours are different to yours, but they're still bolshy little birds. It must be something about robins. Overcompensating for being tiny, perhaps.

Woohoo for the suit, it is spring!

Which bin did you put those shoes in? Is it too late to reconsider?'

Ah, well, you do have the consolation of the serendipitous pairing of the pussy-bow blouse with the Richmark bag. You blend your patterns as deftly as you blend salad ingredients!

Robins are not wimpy birds. A few years ago a freak hail storm hit my small patch of the planet, destroying my stand of 35-year-old Scotch pines, the roof and chimney, and littering our yards with tree limbs and dead birds. One robin nest survived, tucked into the back window of the garage. The workmen and I discovered it contained a sole chick, which we named "The Gobbler". Attended by two males (the workmen informed me they weren't "gay, probl'y widowers, ma'am") this lad grew and grew, so that we began to wonder if he'd ever achieve lift-off. Departure day arrived, The Gobbler glided to the back step and landed beside the feral cats' bowls. I wasn't home, but the lads reported when the felines approached for a sniff and a nibble, "thet robin boy just poofed up like a toad, spred his wings and opened that big mouth to yell. Cats got outta here fast."

That red polyester suit is just my thing! I love reading your blog by the way!

Our robins bully me, if I'm not out there chucking meal worms at them by 7am the little buggers stand on the windowsill and give me daggers while I'm on the Wii Fit.
Loving the red suit and what a shame those new-to-you shoes kill you. I came to the conclusion a few years ago that I can't wear shoes unless I want to limp even worse than i do already so its either boots or flip flops. Which is hard luck if it's a wet day in the summer.
Could you not hack the sleeves off that shift and make it sleeveless? xxx

Oh, Robins! So cute but deadly, vicious, little bastards they are - to other birds!

I've lived in my house for 25 years this September and we've always had a robin or pair in the garden. I'd like to think they're the same pair but they can't be.

I've not noticed the birds singing so early in the morning but what I have noticed for the past couple of months is that they sing after dark! I heard some at midnight the other week and prior to that heard some singing at 8 pm when it's truly dark outside. I do live in the town centre so maybe it's the light pollution? I heard and saw skylarks today whilst out walking.

I'm going to have to try that salad - it looks delicious.

The outfits are lovely on you and what a shame about those gorgeous shoes! I can't wear many high heeled shoes; I've two pair of heels and two pairs of kitten heels and I might wear them once or twice a year, if I'm lucky. It's boots, loafers, sandals or wedges for me!

I love all your accessories for both outfits but the silver brooch is amazing!

I love the sound of the birds at night when they are all going to bed, they chatter away for ever, but the early morning chat can be a bit annoying so I hear you. Hope you have success with your strawberries. Ours went nuts and I still have some in the freezer to make some jam, but I am waiting until it is cooler. Don't want to slave over a hot stove in the warm weather!! Yeah human, go get some more raisins will ya!!

Oh to be young, and so absolutely certain that you know it all. I remember my sister arriving home from college and letting our parents know just how very ignorant they were. They nipped *that* one in the bud.

@Mim
The story goes that the colonists named them Robins because they had a bit of rust colour to them like the European variety. That, and "Big crazy bird that sings all day and night" was a bit long.

@Beth
That's a great story. I can see cats being scared of robins too-those birds are nothing nice!

@Polyester Princess
Thank you! Nice to meet someone that shares my love of the finer fabrics in life.

@Vix
Someone needs to develop an overboot for flip-flops. You could make a fortune.

@Veronica
The robins might be descendants if the birds have been nesting in your garden for any length of time. We saw a few fledglings last year, and I'm guessing they'll be back to our location as word gets passed along that there's food here.

@Sue
I can't say I blame you not wanting to cook in the heat. You did make me wonder though-can jam be made in a crock pot? I know apple butter can. Something to look into.