Pucker Up or Shut Up

From the frog, not me. Sorry. 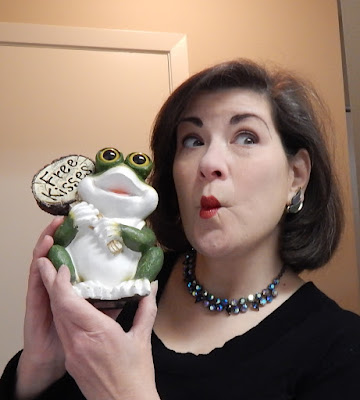 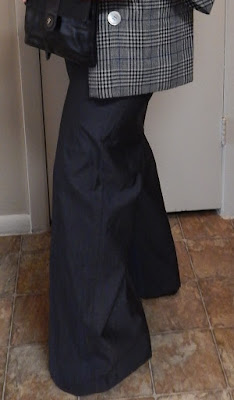 Instead of complaining about that, would you permit me to brag about these recently thrifted silk and wool trousers I bought still bearing their $185.00 label for a dollar? Hell yes, I love thrifting. These were the "cheap" trousers that day, I also scored a pair of linen, made in France trousers with a pricetag of $375.00 also on the dollar rack at Hand-Me-Ups. Who spends that sort of dough on clothes they never even wear? Luckily for me, they do. I love a good pair of wide-legged trousers but they're almost always too baggy at the top. These were perfect, if a tiny bit long. I'll likely wear them with higher heels.

This jacket is a curiosity. It has buttons that would lead you to think it is double-breasted, but no buttonholes to pull them through. The details are nice though, and I found it with the original tags still attached from a department store that has been gone since 1960. This jacket cost $90.00 in the 50's! Good clothes took up a greater share of your budget back then, but they were better made, of course and people had far less. Cheap, available clothing hasn't exactly been a good thing for the world. 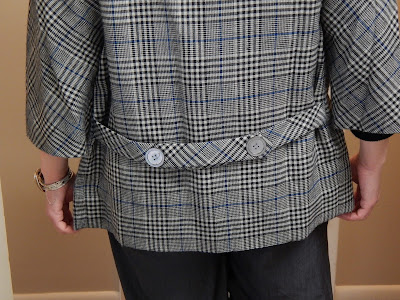 I bought this one at the costume shop, of all places. 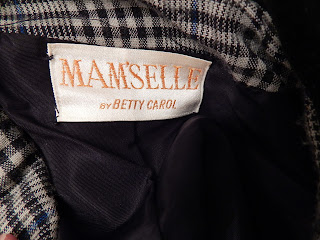 Would you look at those buttons? 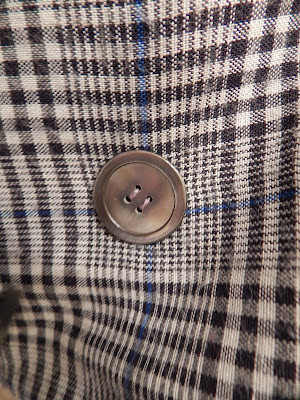 I dressed the jacket up a bit because I really don't know how to do casual sportswear. 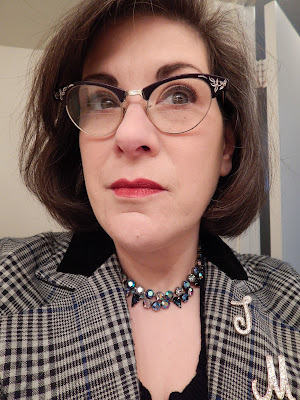 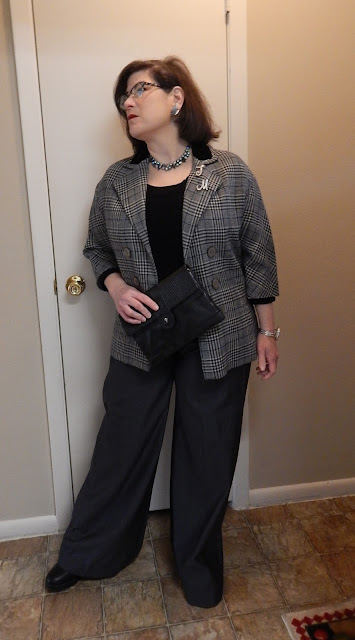 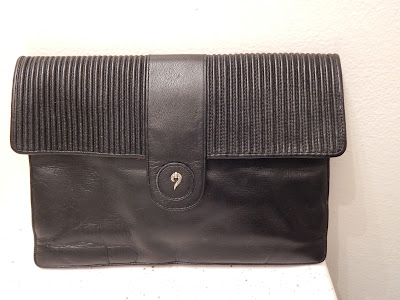 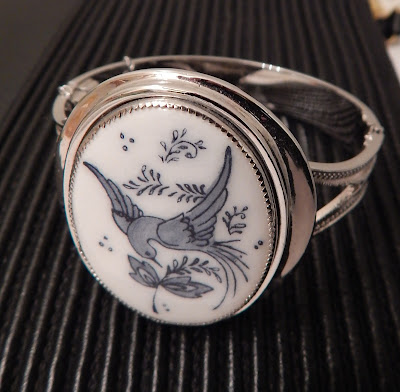 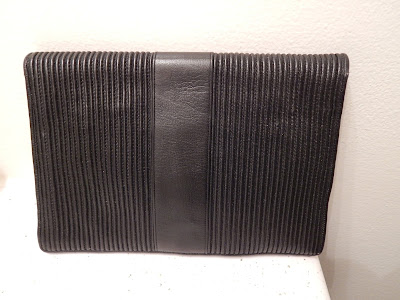 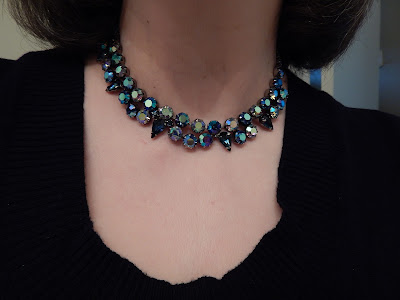 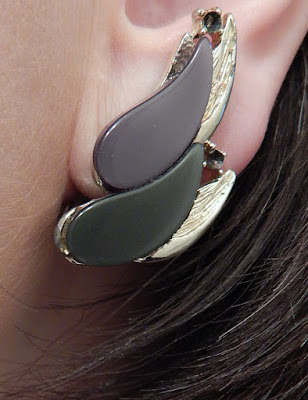 It turns out the swollen finger was just the start of what looks to be one hell of an assault on my immune system. This happens from time-to-time, and I've been living with it most of my adult life. I have to be honest though, this time, it is an ass-kicking. I don't know if it is the combination of going through the change of life at the same time, or what, but each day has been interesting.  I'm sure we'll get it under control (eventually) but if my posts seem a bit scatterbrained, I hope you'll understand and just look at the pictures. Pictures are nice. Here's two I'm rather pleased with... 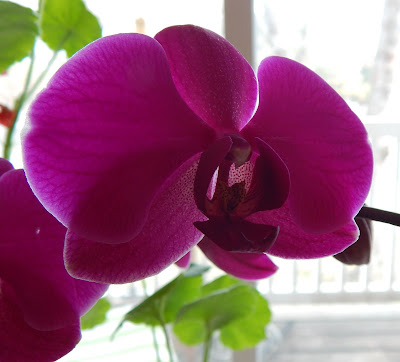 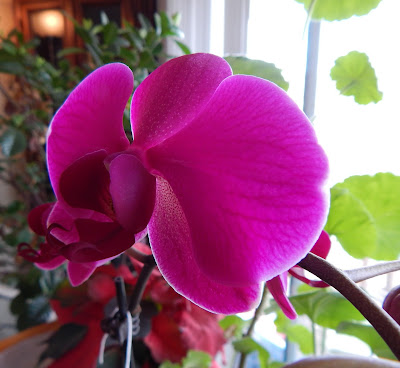 I've wanted an orchid for years, but they're terribly expensive and I'm not good with flowering houseplants. When I saw Aldi was selling them for a tenner after Valentine's Day, I took a chance and brought this one home. Once a week, it gets three ice cubes (or 1/4 cup of cool water) and that's about it. There are six more buds on the stem waiting to bloom, and I'm hopeful they will. In the meantime, I have a new subject to practice photography on. I have to be careful to avoid touching the leaves (latex allergy) but thus far, the plant hasn't tried to kill me. I don't think I've ever owned a prettier plant. The poinsettias are both still thriving as well, which is mind-boggling. I hope they make it to summer so they can live in the garden-wouldn't that be fun? 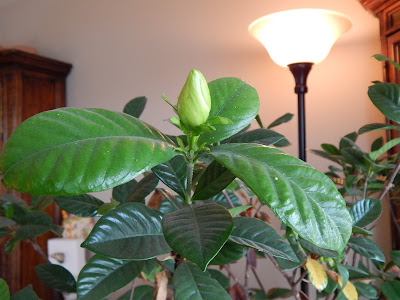 Now, if we could just get the gardenia to bloom without making me wait until summer, I'd feel like I accomplished something monumental. 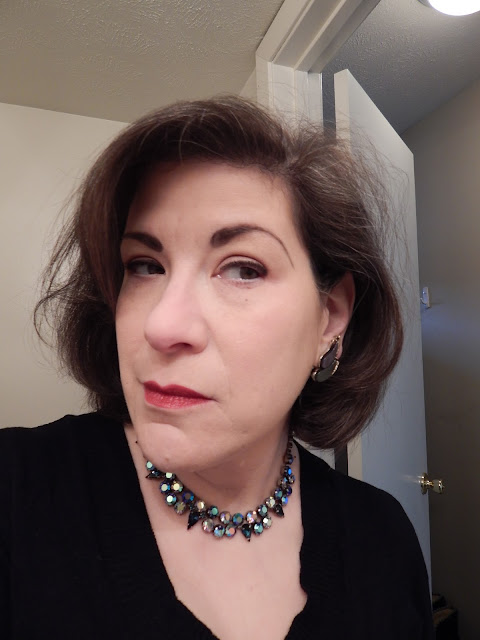 I thought about not posting outfit photos until the swelling goes down, but fuck-it, this isn't some sort of perfect Instagram life-type blog, and if you can't look at a middle-aged woman pumped full of steroid medications, then this probably isn't the blog for you. Shit happens, probably better to just go ahead and look at it. I promise, I don't possess Medusa-like powers, and you'll not turn to stone if you look. I will however sing the praises of ELF redness-reducing primer because what you don't see is a huge, red, butterfly rash that stretches ear-to-ear across my cheeks and nose. They aren't sponsoring me to promote their product, but I'm telling you-it works! A little Dermablend foundation helps too. This is the greatest time to be alive if you have terrible skin-the problem-solving products available are like little miracles in tubes. Where the hell was all this stuff when I was a teenager? You kids today have no idea how good you have it. Someday, I'll tell you about sunless tanner in the 70's. Not pretty. At all.

Suppose if we all think hard enough we can get that gardenia to bloom?

OK, on three,
One
Two
BLOOM!

Ah well, maybe we need to work on that. You guys are the best.

Those are some divine black trousers! Who are they made by, perchance? Love the cut on that 50's plaid jacket too.
BLOOM! C'mon gardenia! Brilliant color on that orchid.
So sorry your immune system is giving you another bout of Hell.
While you're telling the kids about that gawd awful 70's Cheeto orange self tanner be sure to tell them about the miserable excuses for foundation products we used to suffer with too. High price or low price, all were heavily scented, oily, irritating, prone to caking and rubbing off on your clothes & available only in inhuman shades of either terracotta or a warm mauve with grayish undertones. Yes, children not until Bobbi Brown demonstrated that most human beings on the planet have a slightly yellow (not orange) undertone and foundation was supposed to match your skin tone and make your skin look like skin & not painted. Prior to that warm/yellow undertones (or any other actual human skin tone) and skin were to be 'corrected' by slathering oneself either in the grayed mauve resulting in a muddy looking complexion, or the terracotta/orange that was supposed to look suntanned. Any type of redness was amended by spackling on more of the above mentioned product resulting in a curious clown like appearance. Yes kids, we all looked like oompah loompah clowns throughout the 70's and most of the 80's. Nowadays, through the marvels of modern technology for a mere pittance one can buy lovely, easy to apply, non irritating products that make your skin look like skin! As Walter Cronkite would say, "And that's the way it is, March 2nd, 2016."

@Bibi
They're Banana Republic of all places! I haven't been in there in decades, so I had no idea they started selling non-safari clothing (at very high prices). I have some pieces from almost 30 years ago from them that most certainly were NOT fashionable.

Guerlain Terracotta was a real bit of progress for bronzers. I'd still use it if I could afford it. Physicians Formula makes a pretty good knock-off.

Do you remember QT (Quick Tan) Lotion from Coppertone? Yuck.

@Vix
I knew someone must have had good results from QT (they kept selling it)! I always turned out looking like a pumpkin. Your Mum must have had the magical skintone that made the stuff work.

I can't even conceive of spending $90.00 on an item of clothing.

So sorry to hear you are feeling poorly - but you look amazing! You have such lovely colouring; dark hair, dark eyes and porcelain skin! What butterfly rash? I don't believe it...I love that lippy. I'm constantly on the hunt for the perfect (cheap) red lipstick.

The outfit is fabulous and very elegant. What brilliant bargains you got. I simply cannot imagine paying such huge amounts of money for clothes and then not to wear them. Very strange behaviour.

I love your bijouterie too! I have a nice green rhinestone 50s or 60s, I think, necklace that I picked up in a charity shop years ago. I must wear it someday soon.

You have Aldi in the US? Who knew? Do you have Lidl, too? The orchid is beautiful and I'm sending blooming messages to your gardenia...

Have a fab week

Orchids are my favourite and one of these days I will join orchid society to learn how to grow them,you are lucky to have one.
People purchase expensive clothes size smaller hoping to fit in when they loose weight and never do then donate them .Then you get lucky and make me envy.
All your outfits are fabulous and your blog makes me smile each day.Hope

@Veronica
Revlon has some rather nice, inexpensive red lipsticks.

Aldi has been here for years, but we've yet to get Lidl-I really wish we would because I know it would be perfect for the way I shop. The produce at Aldi is nicer than the expensive supermarket near my house. I drive across town to shop at Aldi, but I save a fortune.

That's such a sweet thing for you to say-thank you!
I hope you find beautiful clothes and the perfect orchid. Thus far, it has been easy to care for.

Woah, trouser WIN! What on earth were the pricier ones made of, alpaca and unicorn tweed? I can't get my head round spending that much on a pair of trousers, especially as the original owner then never wore them. You've got some really good finds there, the jacket is really nice. (Do you keep the original tags from things like that?)

I hope you're feeling a little better today, it must be dreadful.

@Mim
Linen.Linen trousers. It isn't even particularly nice linen, but it does have a French label. The tailoring doesn't strike me as being worth that sort of money. About a year ago, I picked up a piece of Valentino couture at a Goodwill (I know!) and turning it inside out, I was shocked at how poorly sewn it was. Someone ordered that piece custom (all the labels were still tucked inside) paid what I'm sure was a huge sum for it, and donated it unworn. Insert standard rant about more money than sense, etc. I do keep the tags (in a pile in the laundry room for now) because it gives me motivation to stay away from shopping retail!

I'll get better-no worries. I'm going to be crabby as hell until I do though...