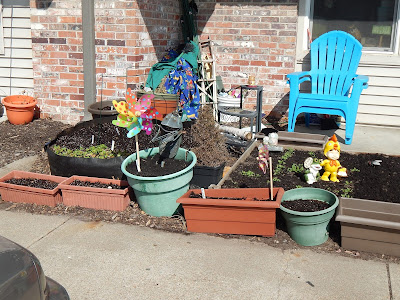 I planted out the cool season items today (broccoli rabbe, beets, radishes, rocket) and re-seeded spinach where there were bare patches. The sorrel overwintered and we'll soon  have enough for cold soup on the first warm days of spring. Omaha hit 81 degrees F. today-that is not typical for this time of year. The Sandhill Crane migration is weeks ahead of schedule as well-poor nature is so screwed-up none of the plants and animals know what to do. We saw a honeybee buzzing around today.

There isn't much for bees to eat yet, so Danny constructed a saucer filled with sugar water and enough small rocks so the bees can perch and drink without getting the sugary water on them. Supposedly this helps them, but I wasn't able to see if any bees were availing themselves of a meal. Bumblebees are another story-if they don't eat within forty minutes of emerging, they die. I hope we don't start seeing them too early. When their time does arrive, we have borage that overwintered, and I'm planting a few new stands of it in back of the house. Of all the flowers I plant, bumblebees really seem to favour the borage. It is dead easy to grow, and both the flowers and leaves are edible. 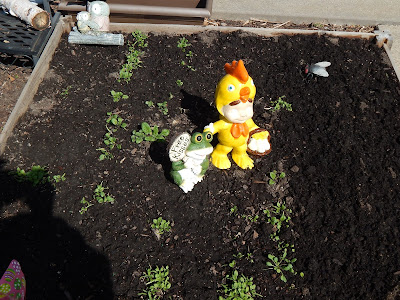 Yes, I do need to thin out the spinach.

I want to thank all of you for putting up with my moaning of late. I'm trying to keep a sense of humour about it all, and I really do appreciate the kind words and support from my friends. I am the world's worst patient, and I do my best to stay the hell away from doctors whenever possible. I have an appointment Thursday, so hopefully I'll be better able to get this under control and move on with life. Hard to believe a finger could be the onset that lead to such an ass-kicking. I planted the garden entirely with my right hand. That was weird. I'm expecting to see all sorts of uneven rows when the plants emerge. 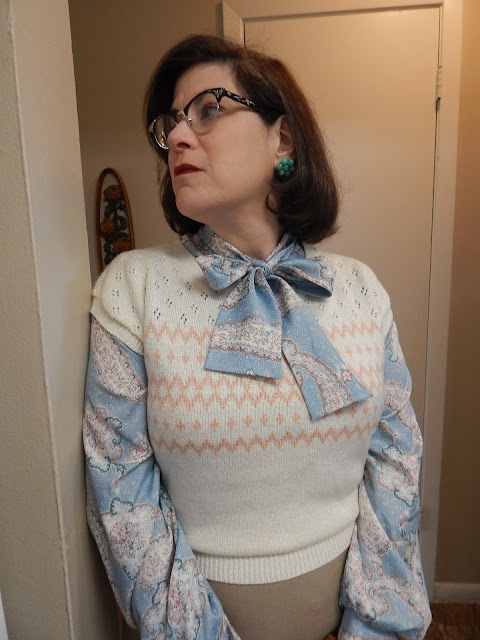 This is my idea of a transitional wardrobe. For years I resisted wearing sleeveless knits unless they were part of a twin set because they look so practical. These days, I wear them because they are so practical. That's probably a milestone of sorts. Looking at the photos from Gucci's show last week, pussy bow blouses and sleeveless knits are downright fashionable at the moment. I liked the description of the collection evoking, "People who hang around libraries." It's like they know me personally.  Anyway, both of these pieces were cheaply purchased and though unlikely to be mistaken for Gucci, they are in the spirit of the thing. 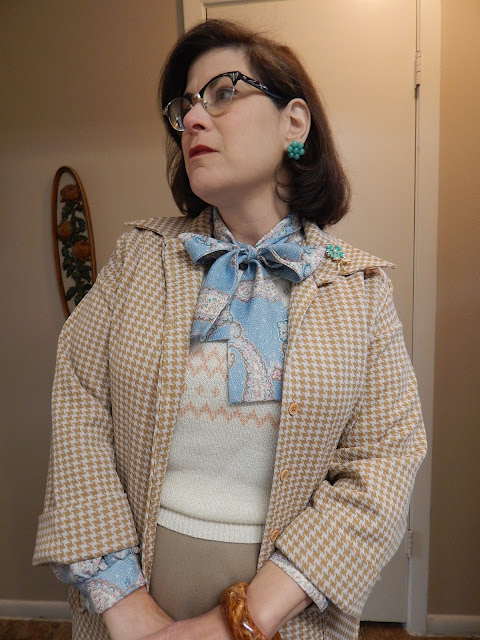 I was feeling adventurous with the pattern mixing today, so I added a jacket.

I stopped in at the Goodwill near my house last weekend because the boys wanted to look for books. I wasn't in the mood to shop, but every corner I turned found yet another incredible vintage piece. As the clothes were all roughly from the same era (late 60's/early 70's) I suspect someone donated a household full of clothing. Looking at the labels (some with the original tags still affixed) it was like a tour through classic American brands. Glentex, Leslie Fay, Panther, Pendleton, Alex Colman, and on and on. These weren't fancy brands, but rather the sort of thing the typical American woman would have worn at the time. I found two 1960's raincoats in navy with white piping. As they're the same size, from the same era I suspect they belonged to the same woman. I remember my mother wearing similar style raincoats, and they always looked so sharp in the springtime. The red satin lining sealed the deal-how could I pass that up?  I'm going to try and swing back there later this week if I can summon the energy because I know there's probably more they haven't priced, and put on the floor. Vintage gets picked through quickly at Goodwill, so it was a shock to see that much of it, all in one place.

This faux crocodile bag was three dollars at the Goodwill last weekend. The dents don't really show in person, so I'm not sure what's going on with the photos. 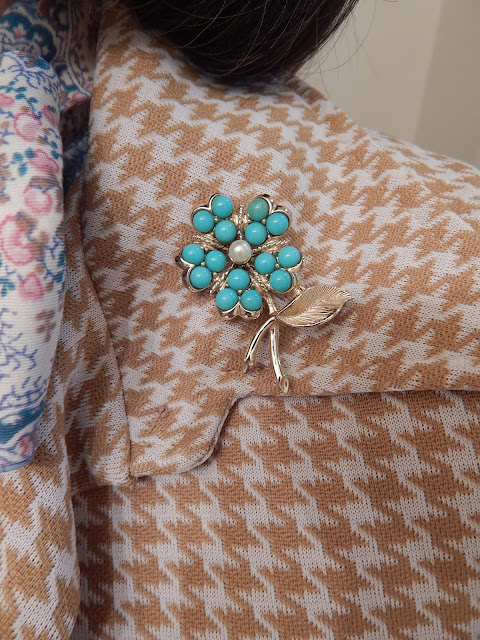 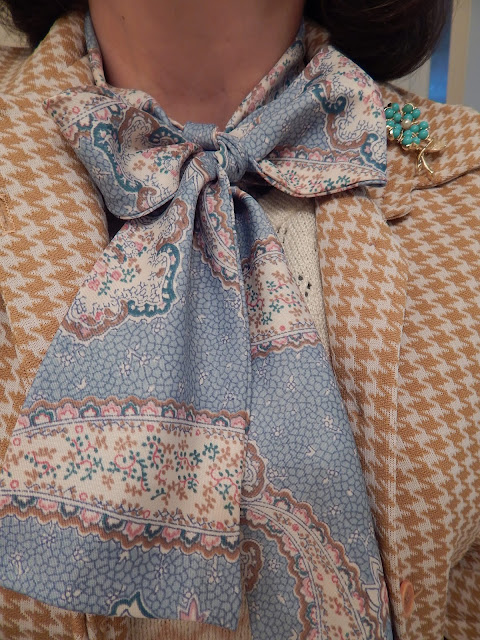 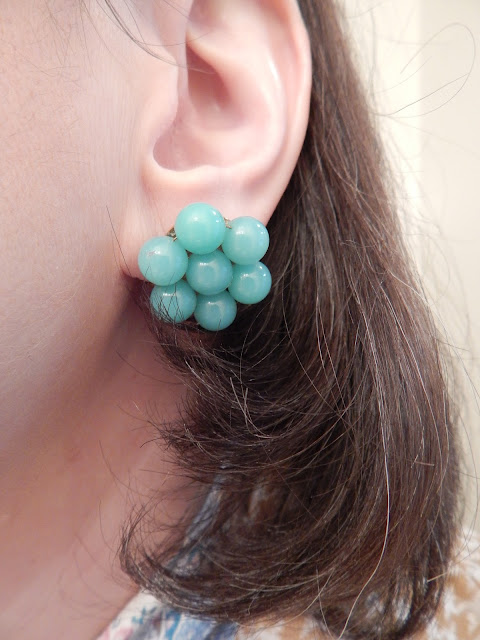 Why yes, as a matter of fact I DO hang around the library. How ever did you guess?

First, let us rejoice in a fully-lined wool skirt! A prize, indeed. However, delight lies in the details -- thanks for the close-up that reveals the coordinating colors and patterns of sweater, blouse and jacket. Whatever tone of tan this is called, it suits you!

Not only are you the sort of person who hangs out in libraries, one suspects you're the sort who can give directions to out-of-town visitors lost in the stacks... It's a good thing.

Libraries are great, who wouldn't want to look like someone who hangs around in them?

Sounds like you found some great pieces in Goodwill. I don't think I'd know what late 60s/early 70s looks like... I'd probably have to go by the font style on the label!

@Beth
I'm learning to use the close-up feature on the camera, but there are some patterns that just defy my every attempt. The colour on the sweater is almost apricot, but not quite. Perhaps a bruised apricot.

@Mim
I try to hang out in libraries as muc as possible as our mayor seems determined to shutter them.
Late 60's/early 70's was a lot of wide trousers, big collars, and maxi dresses. Think "Rich hippie" in the days before Studio 54 and disco. This would be a rather typical outfit:
http://eattheblog.blogspot.com/2014/09/early-bird-special-hell-yes-im-in.html

For my part, at the time I lived in a pair of red tartan trousers and a white poloneck. In summer I wore jeans and a striped tee shirt (always in blue, thank you very much). Then, I grew boobs and had to rethink my wardrobe just in time for "Smock tops." Boobs+ smock tops=all kinds of hideous. Be thankful you were too young to be subjected to that fashion.

Well I was just thinking how well you were dealing with all the misery your body has been putting you through.
Dressing that well, gardening & a trip to Goodwill? WoW!
We tried putting out sugar water in saucers for the bees but the cats kept attacking the bees & getting stung (dummies).
Navy blue raincoats in a late 60's style? FABULOUS!
What is up with Gucci these days? Even their Flora fragrance line is so wan it isn't worth bothering with. I want some "La Dolce Vita" style says Bibi dancing burkha clad in a hailstorm like Anita Ekberg in that Roman fountain.
Boobs + smock tops did indeed = atrocity,
http://calmlycookingcurry.blogspot.com/2016/03/shahi-paneer.html

I need a raincoat! The one my dad bought me 24 years ago, and which still looked & worked like new, was recently accidentally stolen, as it was in the bottom of my buggy (pushchair, baby stroller), which was intentionally stolen.
You have my greatest sympathies regarding the hand, it's so horrible when one doesn't work properly! And where can you let off steam if not here?

All the best people hang around libraries - don't they know that?
I virtually lived in our local library as a kid growing up in London!

That chicken thing is fearsome and may wilt the spinach methinks...

Love the outfit. What a nice mix of colours, beige, white and blue and I love the pattern mixing. I thought you didn't do layers? They look wonderful and I'm so reminded of the 1970s with the blouse under short sleeved jumper vibe. Those shoes are so stylish. It seems like you got some good bargains at Goodwill.

I do hope the visit to the doctor's results in more energy, less swelling and all round feeling betterness.

PS. I love the Mexican tourist clothes and wish some of them would turn up here in UK charity shops....

I adore that blouse,got one in pale pink but it is so hot today here to wear it.
Hoping you will be fine soon with your hand.Sending good wishes and healing light from here.
Your garden looks slightly like mine.I put little ornaments as well with plants.
Hope

I love thinking about all of those old classic clothing brands. We used to get big boxes of hand-me-downs from the family across the street and I would always be so happy if I found a Villager or a Bobbie Brooks label. Cute stuff for me!

I do like that Gucci is doing a bee motif this season because every guy needs a silk suit completely covered with embroidered bees. I'm serious-I LIKE it! They've been replacing the logo on their bags with a giant gold bee as well. Maybe I just like bees. Flora (and all her flankers) are showing up at the discounters now because no one bought them over Christmas. I'm not even tempted because, like you say there isn't much to get excited by.

@Hope
Thank you. I hope it cools down for you soon-it is supposed to be autumn, but sometimes mother nature has other ideas.

@Connie
I always wanted Bobbie Brooks clothes but they were cut too narrow for me. I believe the company is still around, and sold at discounters like Walmart.

@Vix
I have been obsessed with getting back over there-but I'm sure it is too late now. I know some self-help types would say we should just be happy and celebrate the items we scored rather than obsess about what we didn't...but those people are WRONG. And no one like a self-help-know-it-all!

Ooh, I LOVE this combination - you do look all Librarian Chic, and that's a Very Good Thing. I donated a couple of pussy-bow blouses to my shop (they were great but too small for me really) and I was most gratified to see cool young girls snap them up!
I do like finding a whole set of vintage in a charity shop that looks as though it all came from the same person - especially if it's in my size! I recently unpacked a HUGE collection of vintage scarves and hankies, they must have been from one lady's wardrobe - all gorgeous.
81 degrees? Wow! I'm still wearing fur coats and posting about my new-to-me vintage vest!
Hope you feel better soon - sending love. xxx

@Radostin
What sort of pathetic person steals a stroller? I could see it if you had one of those prams that cost more than a good used car, but a stroller? What the hell is wrong with people?

@Curtise
I can't compete with our librarians (the women anyway) as they all dress much better than I do. MUCH better.

@Goody, I do my best to just be grateful that I am not in such a completely desperate situation that stealing a stroller seems like a good idea (& it was a very cheap one!). But I am sad about that raincoat, which may well have just been thrown away :-(