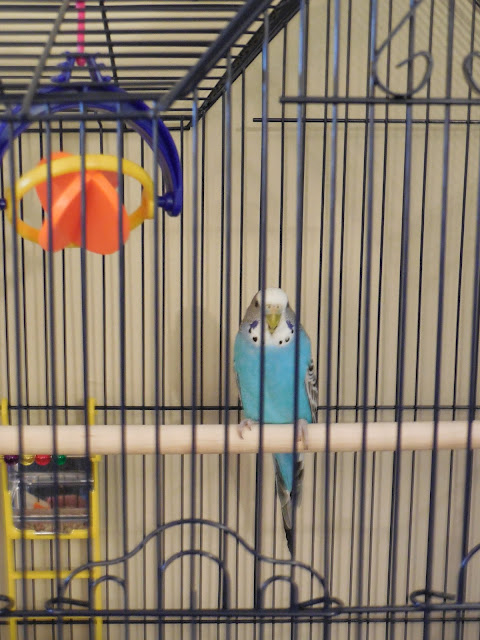 This is Xerox. He's finally adjusting to his new home. He seems to like us, but I do wish he wouldn't carry on so when we leave the room-it is worse than a newborn! Danny has tried reading to him, singing to him, etc. but as soon as we attempt to move...Chirrrrrp! I know this one is going to be a talker, I just hope his first word isn't, Bugger! 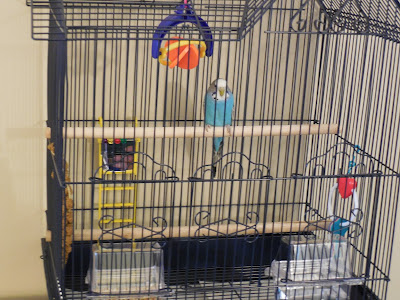 Xerox has plenty of toys, a cuttlefish bone to sharpen his beak,, and plenty of delicious millet treats in addition to his food. He spends most of his time looking in the mirror at his own reflection. He's figured out it isn't another bird, and I imagine him saying to himself, "Xerox, you are one good looking bird. Do you know that?"

I should say, we're not positive he's a male. You can tell by some of the feathers as they age, but without a thorough examination (which we're not going to do now as he needs to calm down before we can handle him) it is almost impossible to say. The general rule of males being more brightly coloured than females doesn't really hold with budgies.

Speaking of "Brightly coloured" things, here's what I saw in bloom outside the Swanson branch library today. 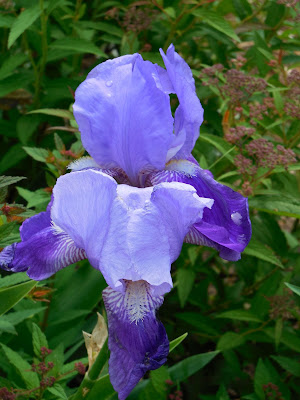 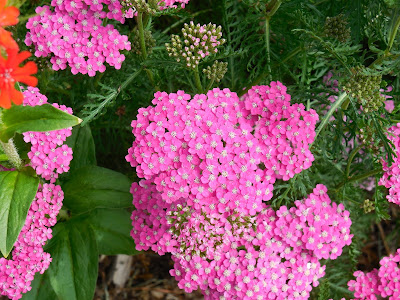 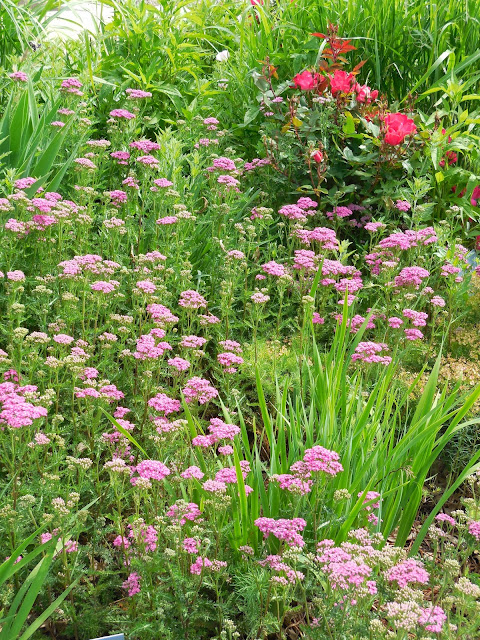 You're probably thinking the library is in some country meadow...not the busy city intersection of 90th and Dodge Streets. 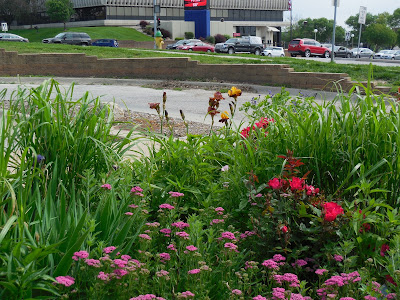 It really is a beautiful spot in the middle of  Omaha. The library isn't half bad either. 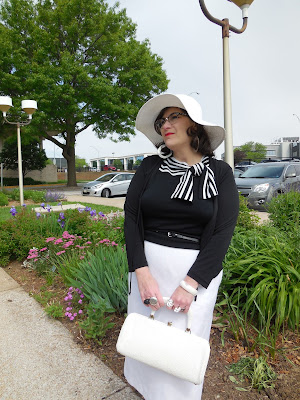 Since everyone and everything around me was bright and colourful, contrarian that I am, I went monochrome. I didn't think the bra looked that bad in person, but the pictures are making me think it is a bit too-pointy, and needs to be brought up several inches in the straps (Sometimes I wonder if I need a bra or a construction crane). Anyway, this is a good lesson in the importance of selecting the correct bra as it ruined an otherwise nicely put together  outfit.

Later in the day, I ended up back at Heron Haven, another beautiful place to enjoy nature hidden away beside a busy, major city road.
I didn't see any heron, but I saw a cowbird. They have a bad reputation for eating the eggs from the nests of other birds. They're not alone in that behaviour. 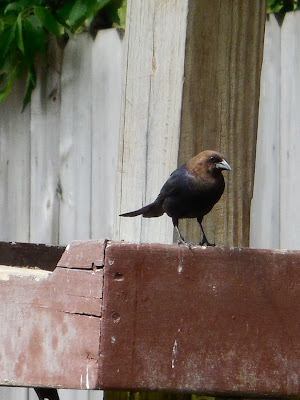 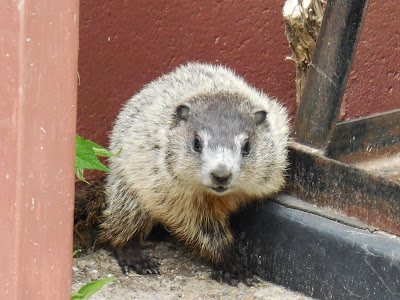 This is a baby woodchuck that was hiding behind the visitor's centre. He wasn't shy at all, and happily posed for a photograph. I didn't see mama or papa around. I still didn't get too close because tangling with an angry woodchuck isn't my idea of fun-they bite! 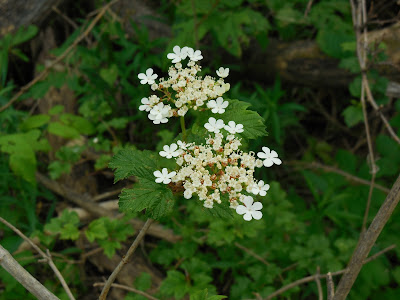 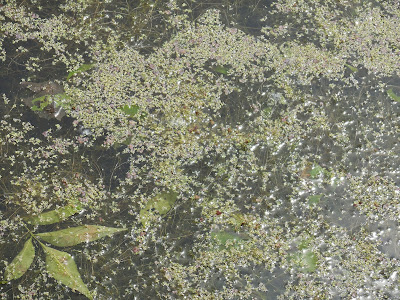 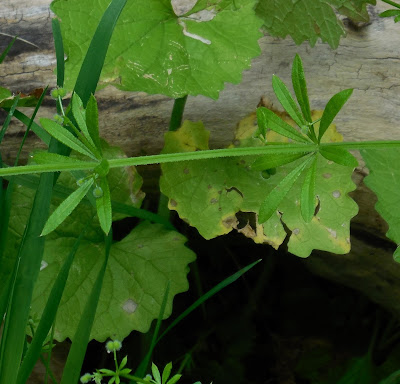 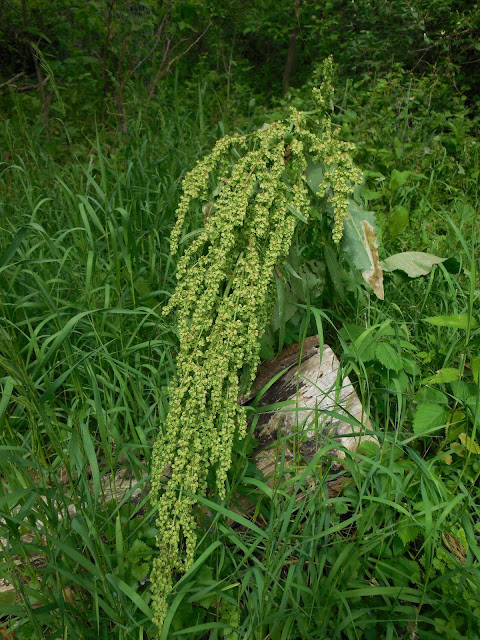 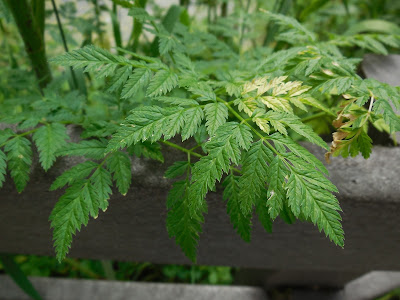 Finally, here's a look at some colour in my garden 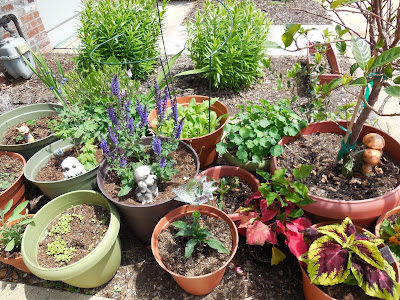 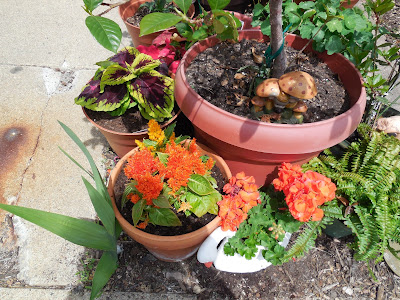 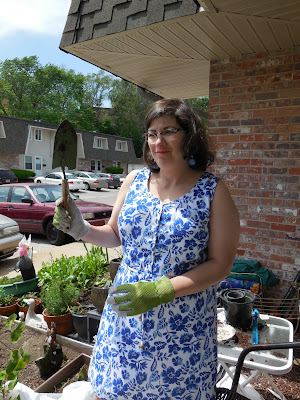 I'll leave you with an unflattering gardening photo-it was HOT outside (and humid). I planted more okra and carrots today. Fingers crossed, we'll get a good crop.
We're expecting rain for the next five days-that ought to do the garden well.

I hope you have a lovely week.

Xerox might calm down more after a week or so. Can you leave the radio on a talk station for him?

You've inspired me to go forth and garden in my containers, Goody! Today's project is to tuck some marigolds into the heirloom tomatoes' -- plenty of room, I think. Fie on the spring monsoons which drowned the snap peas! Shall hope it's finally warm enough to poke nasturtium and chard seeds into the sunny pots which are my DIY salads.

The black and white ensemble is classic elegance, well worth repeating if the foundation didn't please you. Some outfits demand hats and this one suits you!

Fellow on NPR (actually it's PT, Performance Today)who does the musical mysteries has been working with his parrot since he was Danny's age. He commented that Polly has a radio tuned to the classics and favors Beverly Sills. Do hope Xerox isn't a country-western kind of budgie.

What a beautiful bird. Xerox is cute, too. It really is about the bra, isn't it? Or perhaps it's all about the hair...or is it the shoes? I can't remember. Or is it about eating a good breakfast? Anyhoo...Spring is really springing at your house and black and white is the perfect way to celebrate. I'm serious. I LOVE black and white.

@Vix
Woodchucks grow to be quite large, but they can climb a tree so quickly that all you see if their fat behinds wiggling up the trunk. They look awfully cute until you realise they could inflict serious damage on you if they wanted to. I didn't want to hang around and meet the parents!

@Beth
I think Xerox is a Ronnie James Dio fan ;)

You might be able to try the peas again in the fall-they can withstand a frost under a light cover. My neighbour always plants marigolds in her tomato pots to keep stray animals away-it seems to work, and it looks so pretty.

@Connie
I thought it was all about the gin and tonic.

As i recall male budgies have bluer nostrils than females too. I like bird chatter.
Love that purple bearded iris & hot pink yarrow.
I love your monochrome outfit! I bought some Glamorise bras on my last visit to the US, I really like them. Their minimizer is great & really comfortable too.

If you hadn't pointed out the bra thing I wouldn't have noticed, and it's not that bad. Monochrome rocks when you are surrounded by all that glorious colour that I am missing in my garden right now. I want to get a bird that I can teach to talk, but TOF isn't keen. You just know it would swear!!! Go you with your gardening, I love it.

I seemed to have missed this post, Goody. Bloody Google playing up again!

Xerox is so cute! He sounds pretty smart to me.

Love the black and white outfit and as for that lovely little oasis of the countryside in the middle of town - it's wonderful.

@Veronica
I could give green a go...it goes so well with blue (toes).
I wish there were a good alternative to Google, but there doesn't seem to be.

@Sue
Yep-you need a talking bird!
I wonder if Xerox will pick up my Chicago accent as well? Poor bird...I should just stop talking!