An Egg-cellent Time Was Had By All

Please permit me to brag on the youngster as he took third place in the Cluck Off at the Wayne, Nebraska annual Chicken Show. The video of him clucking wouldn't load (figures) but believe me when I tell you it was a proud, parental moment. He won $25.00 for his efforts, and a ribbon. I thought I couldn't be prouder than when he won the Little Edie costume contest at Film Streams last year, but this was a genuine triumph. 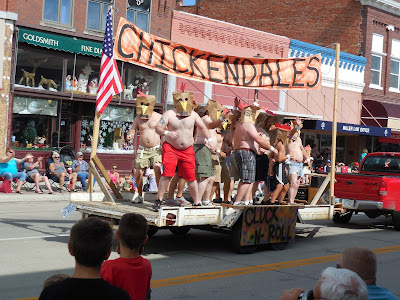 The parade was great fun too. There were "Exotic male dancers" this year. 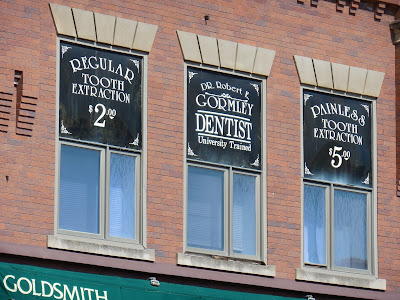 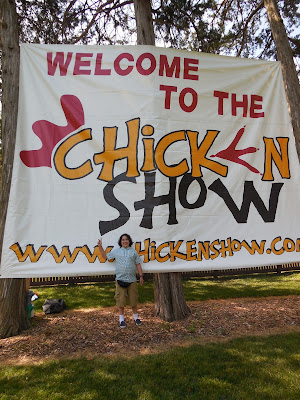 The look on the children's faces when the man in the chicken suit hopped on the see-saw was priceless! 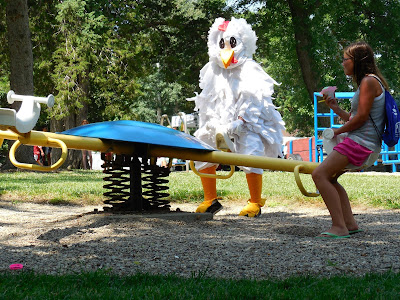 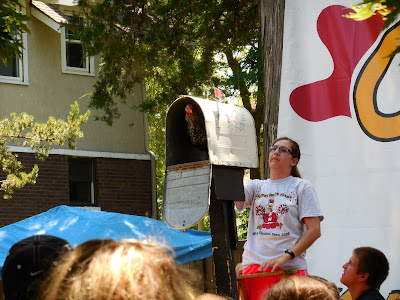 The chicken in the post box is participating in a "flying" contest. It is really more of a jumping contest as chickens don't fly in the way we think of flying. Each chicken's distance of where they fall on the ground is recorded for a prize. This particular chicken was reluctant to leave the post box (well, yeah-I wonder why?!) so they has a toilet plunger to hand for gently nudging it out.

I didn't stay for the egg-drop contest where contestants had to catch a raw egg dropped from a crane (the construction equipment, not the bird) or the hard-boiled-egg eating contest (because...ewww) but we thoroughly enjoyed our visit to the chicken show. We were able to take in a quilt show in town as well.

There was so much to do, we ran out of time! Next year, we'll get there earlier. If you're looking for something interesting to do in Nebraska the second weekend of July, start planning your 2017 visit now.
Posted by Goody at 5:13 PM
Labels: Chicken Show, Chickens, Country Living, Danny, Nebraska, Things My Son Will Discuss In Therapy Someday, Wayne Nebraska

Danny's getting very good at winning/placing in strange contests. Congratulations to him!

There was a tiny bit of me that thought you were pulling our legs when you posted about the Chicken Show. Clearly, you weren't.

I loved the exotic male dancers - they nearly all had very 'exotic' beer bellies!

Have a great week, Goody. Have you broken up for the summer yet?

Wow! Congrats to Danny for being in the winner's circle (nest?). I loved the pictures of the Chicken Show...The Chickendale's looked like a bunch of good-natures fellows indeed!! Did they do the Chicken Dance :)

Well done, Danny!
Those exotic dancers are brilliant, too. What a quirky event. x

That tears it. I am coming to next year's Chicken Show, because there's nothing I love more than a weird small-town parade.

@Ann
I'll have to get him to re-create the call for the blog.

@Mim
He recently discovered a "Buffalo chip" tossing contest, so perhaps that's next on his list.

@Veronica
Nah, some things are so crazy I couldn't possibly make them up! We're mostly finished for summer, though we're continuing with a daily maths lesson and French. He has a book report due in September, but that's about it. All our attention is focused on the fair now.
Hope you have a great week as well.

@Thrifty Parka
No chicken dance, and not a Chicken Lady in sight!

@Vix
I suspect there was quite a bit of alcohol involved in the Chickendales routine.

@Propagatrix
I hope you make good on that-we'd have a hell of a time. There's a street dance that we didn't stay for that I'm sure would be a new level of strange even I would find shocking.