A Skirt So Nice, I Bought it Twice 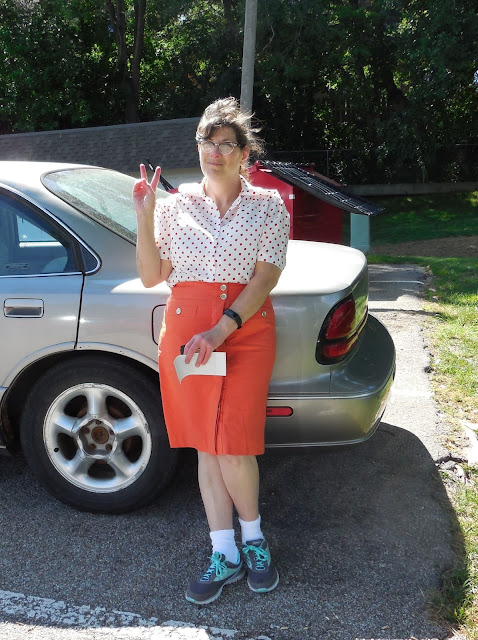 When I saw the two identical skirts, new with tags on the rail at Goodwill, I had to have them both. I like the clothes at Talbot's, but I like them even better at Goodwill prices. 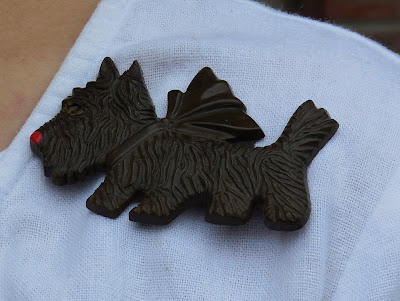 I don't know what sort of week you're having (great, I hope!) but mine has been hectic, bordering on madness. That's not a bad thing, as I prefer being busy to sitting around watching my fat ass get fatter, but the next few weeks don't look like I'm going to have much room to breathe, much less relax. The fair entries need to be driven to Grand Island on 22 August which is terrifyingly near. I submitted the paperwork for Danny last evening-he has 31 entries! I'm renting a mini-van for the ride down so none of his pastries end up damaged being transported in our tiny Ford Focus. It isn't as terrible as it sounds-Swedish Tea Ring, Cinnamon Buns, and Chelsea Buns all use the same basic sweet dough, so he can make a doubled batch and fill them accordingly. It will be a bit like running a bakery for the next few weeks, but I'm quite proud of his determination. 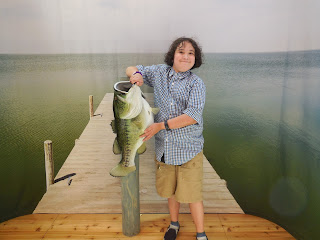 Speaking of the kid, he found this photo-op station at the sporting goods store. I think there's supposed to be a fishing rod in there, unless of course he was Noodling though I think that is largely done with catfish. Hand-fishing is a rather tough sport, and frankly I just don't see Danny shoving his arm down a fish's gaping maw. I could be wrong though-he hangs out with wildlife biologists, and they're a strange lot. 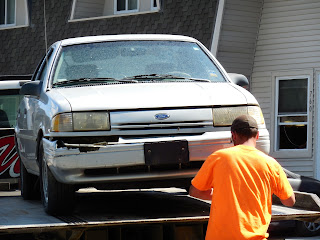 The Mighty Ford Tempo finally went away to that great car graveyard in Omaha. I was sad to see it go-I always felt so young driving that heap around town. It was certainly the best five hundred bucks I ever spent. We got our money out of it, and then some. So long, Mighty Tempo-you were a good car! We did keep the stick I used to prop open the trunk after the latch failed. It always got a great laugh from teenagers at the supermarket helping me out to my car with the sacks.
"What's brown and sticky?" I'd ask as I put the key in the lock of the trunk. After a wary look, the kids would eventually mutter,
"I dunno...what?"
I'd grab the stick from the trunk, prop open the top and exclaim, "A STICK!"
It was good for an eye-roll or two. I'll miss that. 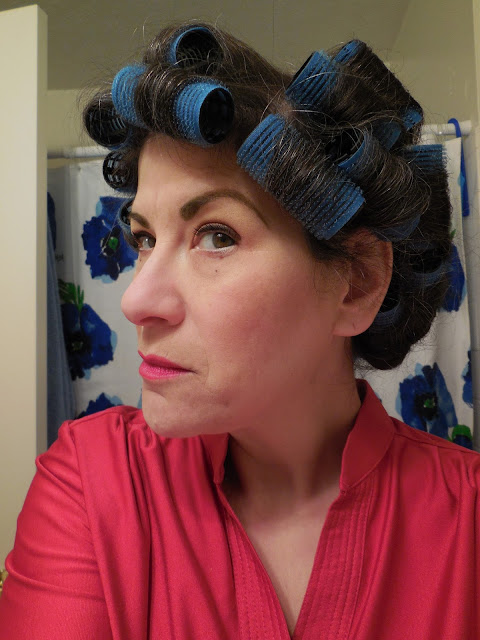 This is how my neighbours see me most mornings as I water my garden and take out the rubbish. I've frightened many a postman and meter-reader with this look. There's a reason I have a "GET OFF MY LAWN!" sign in the front window. As you can see, I did a half-assed job of rolling my hair but it was good enough for the weather we've been having. I can't even think of using a hair dryer in this heat. 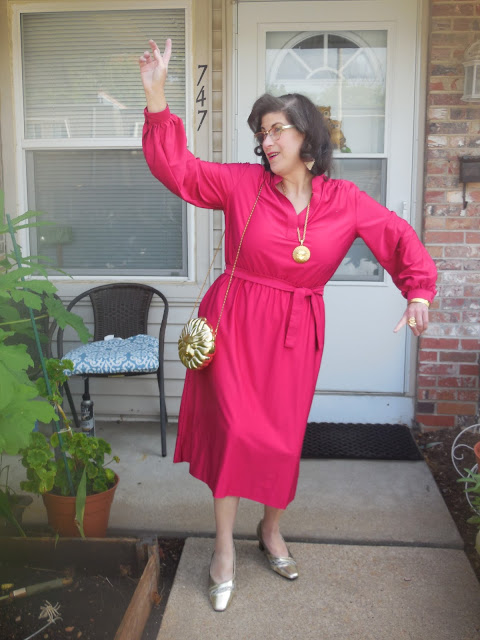 Everyone ready to disco? Who needs fog machines when I have humidity steaming up the camera lens? 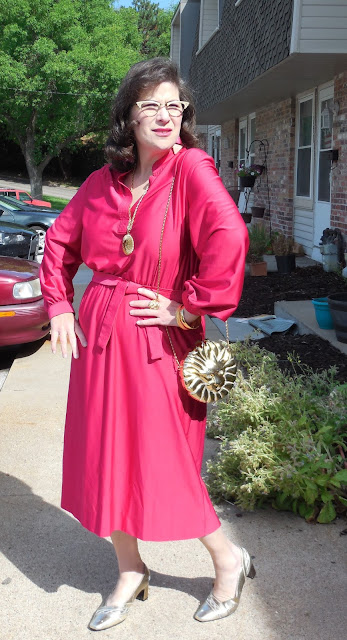 The dress is gigantic (so am I, but this is too big, even for my potato-shaped physique), unflattering, but so, so comfortable to wear. A shiny magenta disco dress doesn't come into your life every day, so I'm keeping it, and if I find the time, I might do some alterations. 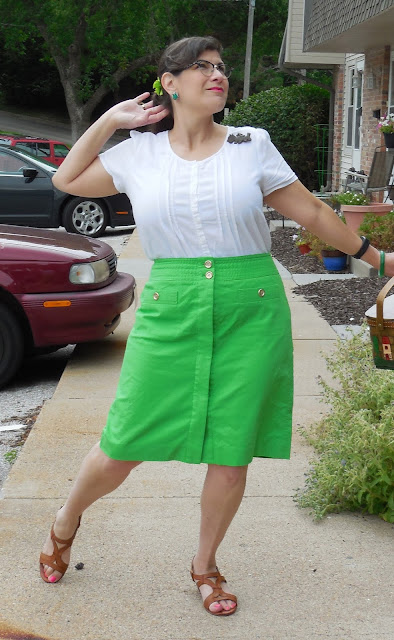 Well, I love the magenta dress on you even if it's yards too big and the Talbot skirts. Who buys these pricy brands like Talbots & Coldwater Creek & sends them to thrift in Omaha? The wives of wealthy execs at Mutual of Omaha or is there some other big big corp in Omaha I don't know about?

I bought some rollers like that but they broke my delicate platinum locks off.

How's that Carnal Flower treating you? That's one tuberose I haven't tried because I'm afraid I'll like it. Brave woman you are wearing Ma Griffe in hot weather!

Good luck to Danny on his fair entries! (I used to be a competition baker too, won quite a few prizes myself.)

Not one but two! Talbot's skirts at Goodwill?! Like Bibi, I'd like to meet whoever has a closet that is the Mother Lode of unworn wearable goodies. Years ago I had a green Talbot "skort" that was a close cousin to your skirt. I bought it to wear for flying lessons in a little plane that required agility to enter and exit -- it lasted longer than my lessons and became my go-to golfing attire. Love Talbot's!

I do believe I've seen the slinky disco dress, worn with the rollers under a lacy tea-cozy, entering a local liquor store. No doubt a late trip for party supplies...

Clever Danny the baker with his well-thought out variations on a basic dough! And clever you, Goody, for hiring transport: the devil lurks in the details and the logistics.

Love the skirts and what lovely colours!

Brilliant photo of Danny and 'The Fish'. I wish him luck with his baked goods at the fair and will have my fingers crossed for him. Smart move on your part, hiring a bigger vehicle. What we do for our kids, eh?

Shame about your car - it sounded like a really good bargain.

I looove those skirts, and their in my favorite colors!

Good luck with the entries...keep us posted - please :)

I have been guilty of buying more than one thing in different colours on more than one occasion. For me it is shoes. I think if you find a style you like then you may as well have it in all the colours of the rainbow!! So your old car has gone to the car grave yard, it was well loved so you gave it a good life. Then I read mini van to take all Danny's prize winning entries to the fair, WOW!! The kid has talent mum, wish him luck from old Aunty Sue in NZ.

@Bibi
Around here the women *ARE* the executives!

I didn't get excited by the Carnal Flower when I bought the decant in winter. Now, in the warmer weather I like it better. Most tuberose would be too much in the humidity (I wouldn't wear Fracas now) but even though Carnal Flower is strong, it isn't overwhelming in the heat. Counter-intuitive, I know but for some reason, it works. Worth the money? *Probably* but I'd go for a decant. On the positive side, it has a huuuuuge silage, and lasts forever so a small bit will keep you for a good long time.

The Ma Griffe was also easier to wear in summer than winter for some reason. I wonder if menopause is playing tricks with my nose?

@Beth
That's funny-I was wishing the skirts were skorts when I bought them-they really do look as though they ought to be.

Talbot's has rather good sales if you watch for them, but I always forget.

@Veronica
I nearly cried as they took the car away. We also rid ourselves of a '96 Oldsmobile that belonged to my dad. We're a one-car family now as we live on a bus route, and Mr. ETB hates driving. I insist he drive at the weekend to keep up his skills, but after years of hours long commutes when we lived in the country, I think he's relieved to be done with cars.

I hope your holiday is going well and that the weather is behaving for you.

@Thrifty Parka
Thank you. He's really encouraged by the well wishes from everyone. Most of the entries are canning, and thankfully all but one last batch of plum jam is completed. Times like this...I wish I had a double oven.

@Ann
The Scottie is missing his eye (Probably a rhinestone) so I'm on the search for a replacement. I liked the brownish-grey colour as it is unusual for a Scottie.

@Sue
You have THE BEST shoe collection, so I can understand wanting every colour. I was just thinking of you today-I bought a lovely tourist tea towel from NZ with different breeds of sheep on it.

You are SO cool!

@Radostin
Awww, you're kind.
Now get off my lawn you young whippersnapper!

@Vix
Primark has arrived in the US. We don't have one in Omaha yet, but it is only a matter of time.

Talbots is similar to Boden.