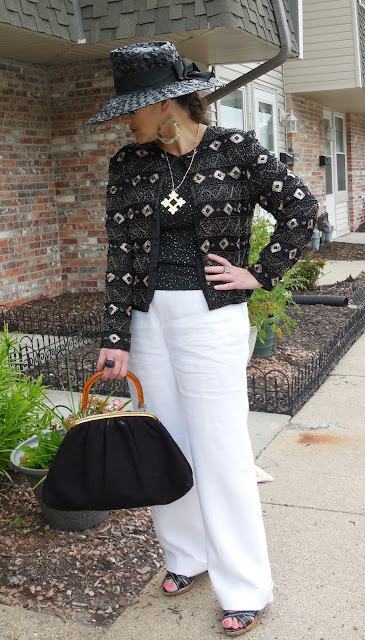 As summer is winding down, I thought it wise to give the white linen trousers another wearing. I packed away my spring and early to mid-summer wardrobe yesterday, and now I can begin slowly moving into late summer/early autumn. I know we won't be clear of the heat until at least October, but there's already a chill in the evening air-I regretted wearing a sleeveless top for my evening walk. I did better than most years getting the summer items worn (at least once) and photographed (mostly). 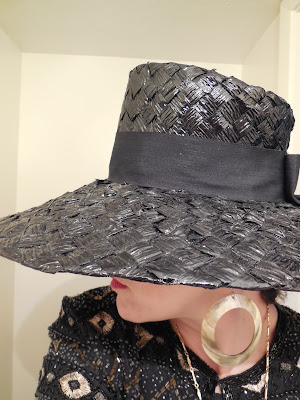 Today was my first opportunity to wear this vintage hat I bought last spring at Hand-Me-Ups. It has a union label, but no designer label. The design is interesting with the crown ever-so slightly off-kilter. It reminds me of those topsy-turvy cakes people have at weddings these days. This isn't an easy hat to wear, but it does look rather sophisticated once it is on-even on the likes of me! 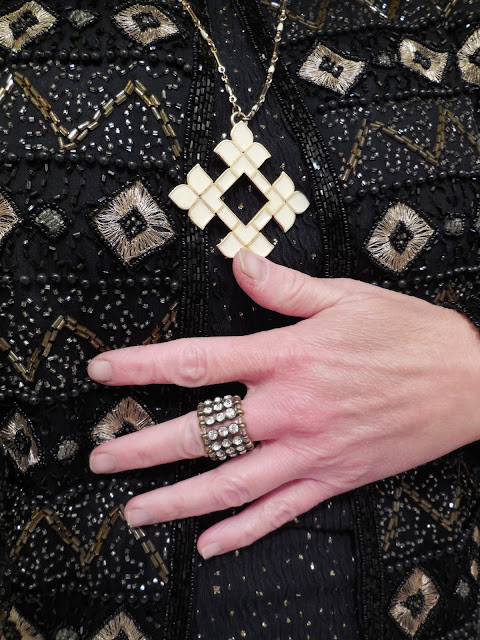 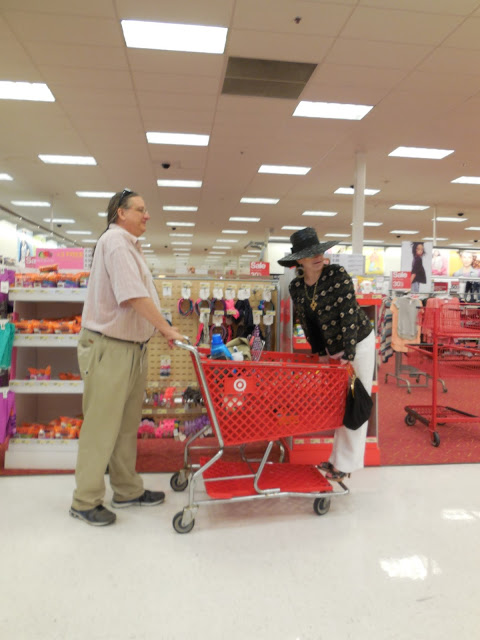 Being Sunday, there was public silliness. Really, the three of us can't be trusted to behave together!
It was no small feat staying on that carriage as he raced through the store. Probably not the best activity in 4" heels. There's no graceful way to stand without my behind sticking out either. 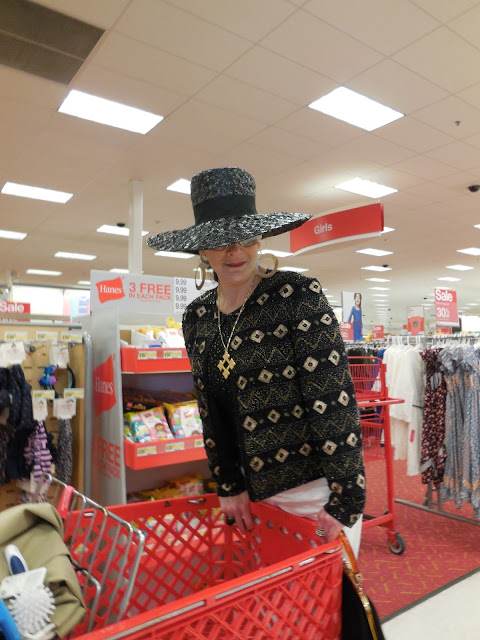 I don't bother wondering what people must think...because I don't care. 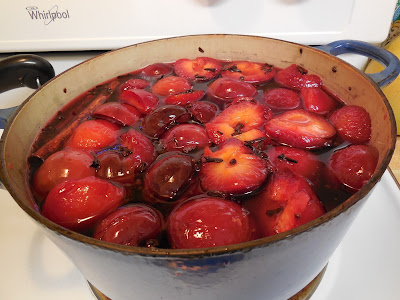 Here's a peek at the bottling process. These are pickled and spiced plums. 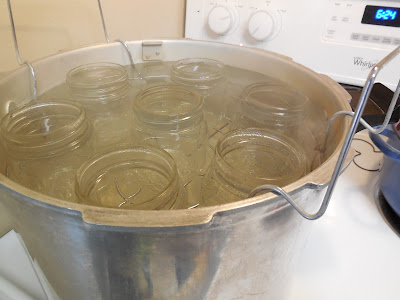 Our trusty pressure canner can also be put into service for a water-bath. 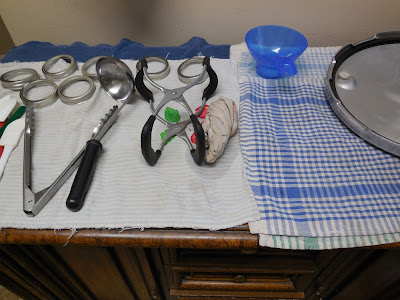 Danny has his tools laid out like a surgeon.
That twisted-up wet tea towel has an inportant role wiping clean the rim and treads on the jars. It is an easy to overlook step, but having the damp towel at the ready helps ensure the task is completed. We use two-part jars with lids and screw-on bands, and the tiniest bit of food stuck under the lid would be enough to spoil the seal. 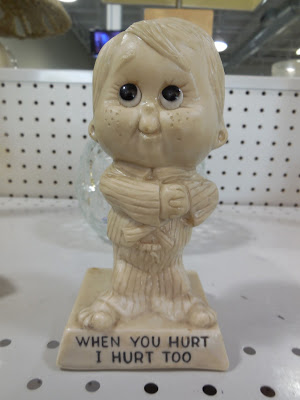 I'll leave you with this figurine I spotted at Goodwill, but didn't buy. Even when these things were at the height of their popularity in the 70's, it would have been terribly awkward to present someone going through a difficult time with something like this. If I still worked in an office, it would be an interesting thing to leave on my desk. People would want to ask, but would be too uncomfortable.

Hope you had a nice weekend, and the week ahead treats you well. Remember, when you hurt...ah, fuck it.

That figurine is CREEPY. I'd forgotten things like that existed, though now I'm sure my parents had a little 'Love is...' figurine. I cant' remember how the slogan on it went; 'Love is... junked in the divorce' probably would have been most appropriate.

You look far too swish there for a trip to the shops - you look like you should be drinking cocktails in a Duran Duran video. (Not Wild Boys. That would be weird.)

Dang, I can't decide if you look more Palm Springs, West Palm Beach , or Rodeo Drive in that super chic black & white ensemble!
Love that hat & beaded jacket. Backwards on a cart through Target on 4 inch heels too, you're my hero(ine)!

Women execs in Omaha, salute! Oops, that kinda sounded like something they'd say on HeeHaw.

That 70's figurine thing sort of looks like it's wearing a straitjacket. If it isn't it should be.
Bravo Danny! Perhaps Danny'd like to practice his surgical skills giving that creepy figurine a much needed lobotomy? I'd go for an icepick through the eye but Danny would probably do a neater job with the tea towel & all.

Phreyow!! You and Mr. ETB look like you belong in Vogue!! Two thumbs up!

Good job wearing all of your summer things. That is definitely something I struggle with!

@Mim
"Love is...junked in the divorce"
I shouldn't laugh, but being the veteran of one divorce (so far!) it did make me smirk.

@Ann
For a kid whose room looks like a bomb went off, he's rather neat with cooking and bottling!

@Thrifty Parka
Vogue-the Big Red Edition! That's the college football team, which is pretty much all we have in Nebraska. Well, and corn. Gosh, I wish Nebraska Vogue was a real thing.

A magnificent topper! The earrings are perfection with that interesting crown and brim -- and the shape of the necklace is a neat echo of the print! Dunno about 4 inch heels when riding a bascart, however... (wish I'd been there to see the reactions).

I am so surprised that you didn't get into the trolley, maybe next time!! You look gorgeous in that black hat, perfect outfit.

@Vix
You should see our antics at Aldi. Sooner or later we're going to get ourselves banned from the place.

@Beth
The reactions were lots of side-eye as though shouting, "How dare they have fun."
Yeah, life is miserable so lighten-up for fifteen minutes and have a laugh...some people just can't bring themselves to snap out of life for a moment...and then they get resentful that I can.

@Sue
What if I got stuck?!
Would be fun though, I could scream like a toddler at all the toys I want.