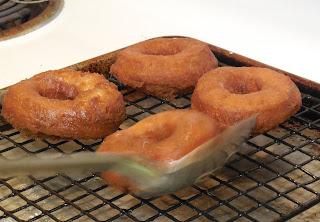 Last evening, I made apple cider doughnuts (Recipe here) for the boys to take with to Film Streams for the Metropolitan Opera Simulcast today. Outside food is permitted, which does help when you have a child with food allergies. My husband was kind enough to volunteer as chaperone, leaving me the luxury of sleeping in this morning. Just before the opera was to begin, my phone rang.

"Uh, did you know this is a five hour opera?"
"Well (stalling) I think there's a couple of intermissions..."
"You said this was a shorter opera."
"It is...for Wagner."

Good thing I made those doughnuts. I'll make sure to have a nice dinner ready when they get home (spaetzel, anyone?).

The recipe by the way, was excellent. The addition of wholemeal flour gives them a beautiful colour and nuttiness. For readers outside of the US, the "Cider" used here is not the alcoholic sort, but what most of the world calls, "Cloudy apple juice", "Fresh", or "Pressed." I did not use the glaze in the recipe, but tossed them in a paper sack with cinnamon sugar. The recipe made twenty doughnuts and holes, half of which I froze in small packets to be re-heated on weekend mornings. I also used fresh oil from a new bottle which was extravagant, but worth it. I make doughnuts about once every three or four years, so why not make them as nice as possible? As a bonus, the smell didn't linger in the house next morning. 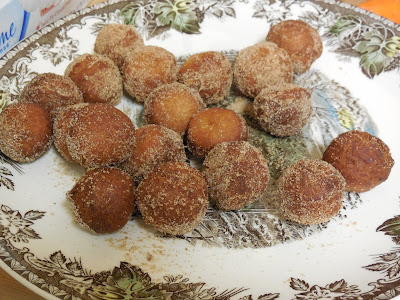 Posted by Goody at 11:49 AM
Labels: Doughnuts, opera, Wagner

The men in your life must be made of stern stuff - a five hour opera? Yikes!

The doughnuts look delicious. I am ashamed to say I was salivating like Pavlov's dog just looking at the pictures...

Mmmm! Those look so good. I've never made doughnuts but I may try now. My waistline thanks you.

I've never made baking powder doughnuts but those look divine!
If I can find some viable yeast I'm going to make portzelky this year.

Ooooh those look good. I am aware of the cider thing - I got quite freaked out years ago by Martha Stewart talking about giving cider to her horses.

Five hours of Wagner. Jeepers. I hope Danny realises how much his parents love him!

Yum!!! I am not sure I could do five hours of opera. But I bet the lads enjoyed their outing while you enjoyed your bit of 'me' time. Tempted to try making doughnuts now, or maybe I could get TOF to do it.

Wagner is too Freudian for me -- but the Italians, now for those gentlemen and their divas wearing delicious costumes I'll haul out the fingerless long gloves and eat myself sick on chocs from a foil box. With champagne, of course. (I've never understood why more orchards don't sell doughnuts with the apples and the cider. Yum!)

Have you ever walked into one of the fancy pastry shops and the shelves are just filled with gorgeous creations, each one more wonderful than the next, that you almost feel light headed with joy? Well....that's how I feel having just spent the past hour scrolling through all of your posts that I missed while I was hibernating. You are a GENIUS, Girlfriend. Then you reward us with doughnuts!! XXXOOO

They're doing it again next week for Don Giovanni. Think I'll send muffins next time.

@Bobbi
The hardest part is keeping an eye on the oil temperature-a good candy thermometer does the trick nicely.

@Bibi
Would a sourdough starter work? You'd have plenty of time to grow one.

@Mim
I'm puzzled why she'd give non-alcoholic cider to horses. I wonder if they like it?

@Sue
If I let Mr. ETB do it, he'd burn the house down so any frying is solely my job.

@Ann
Film Streams is an art house cinema that sells memberships so don't need to make all their profits on over-priced concessions. They do sell beer, which I find nice.

@Beth
Orchards have become more entertainment destinations than eating ones. The corn mazes, hayrack rides, haunted houses etc. seem to be the main focus these days, not the apples, cider and doughnuts. Me? I'm only in it for the food if I have to go through an orchard picking apples. I expect apple butter and doughnuts.

@Connie
That's such a lovely thing to say-thank you. I hope you had a nice hibernation and are ready to come out and attack some picnic baskets.

@Vix
My problem with opera is the same problem I have with most rock music-the singing. I could appreciate both better if they'd shut the hell up and just play the music. Clearly, the orchestra is where I prefer to spend my time ;)