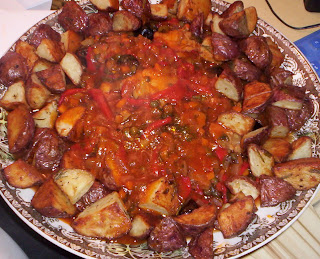 Salt cod has a bad reputation, largely due to its association as a food of deprivation. With the price of cod these days, even the salted variety, it can now safely be thought of as a luxury food. Still not convinced? Conjures up too many images of boiling cauldrons of chowder ladled over hardtack? Relax, I'm going to show you a recipe that reflects neither Newfoundland thrift, nor the Scandinavian tendency to cook with lye. This is a salt cod recipe you can manage to both prepare, and eat.

Last year (about this time, actually) I made Brandade and used it to spread on toast and as a filling for ravioli. I rather like it, but two people can only eat so much of it-and a little goes a very long way. The baccala however, went fast. This recipe should serve six but instead I had one nugget sized piece of fish and well, we all know who finished the rest of the platter (and it wasn't Danny). That sort of shocked me, though the dish is considerably lighter than brandade. It sort of reminded me of my dad when the family would go out for Friday fish fry (this used to be a big deal in the Midwest-all you can eat fried fish and chips. Now you only see it during Lent, if at all though when I was young (a million years ago) every Friday was meatless for Catholics. So anyway, my dad would tell the waitress to just skip the potatoes and cole slaw and bring him fish three at a time so he wouldn't have to keep flagging her down. Mind you, my dad did pretty hard physical work all day making deliveries so it wasn't like 5,000 calories was just going to sit there (though he was a pretty large man). He could easily down ten pieces of fried fish and then stop for ice-cream on the way home (he used to walk to the corner drugstore every night after dinner for a pint of ice-cream until my mother put a stop to it). What was my point? Oh yeah, if you're serving this to a man with a hearty appetite, don't count on leftovers. I'm sure a woman could devour a pound and a half of salt cod, but I've got to think even if she could, she would have more sense. I'm sure that's why God put women on Earth-to keep men from eating until they throw up-like dogs...except dogs sometimes eat their vomit...but anyway, you get the idea.

Roasted potatoes or rice to serve with

In a pot of boiling water, cook the baccala for about eight minutes. Drain. Dry well on a towel. Cut into chunks and dredge in flour. Fry in pan with olive oil until browned. Set aside.

In a large, heavy pot cook the carrot, celery and onion in a bit of olive oil until browned. Add the tomato paste, peppers, olives, capers, wine and half a cup of the hot water. Bring to a boil and cook a few minutes to slightly reduce and burn off the alcohol. Add the baccala, cover with sauce and sprinkle with parsley. Slowly add 2-3 ladles of hot water . Cover and simmer very slowly for 1 1/2-2 hours. Keep checking to make sure the sauce doesn't dry out (add more water if needed).

While baccala cooks, either roast potatoes or make rice. A good crusty bread is also nice to soak up sauce.

Before serving, remove to a platter and then heat the remaining liquid at boiling until it thickens. Pour sauce over fish, vegetables and potatoes/rice. Serve hot, and try not to eat a pound and a half of salt cod in one sitting (mama sez even if you don't get a bellyache, it isn't smart).
Posted by Goody at 5:51 PM
Labels: Italian, Salt Cod