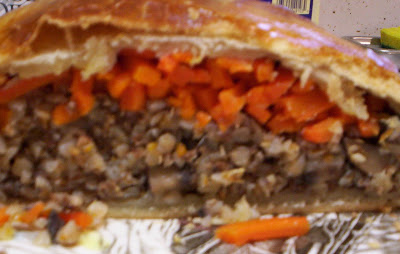 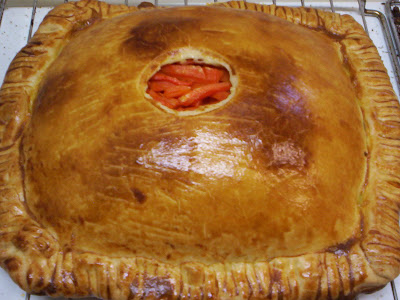 I say "sort-of" because it is filled with carrots, mushrooms and kasha instead of salmon and rice. I've made this before and you can see prettier efforts HERE. This time, I made two instead of a single large pastry as it is easier to manage the leftovers.

I won't lie-this is a huge pain to prepare. Like most things, it can be done in stages which makes it somewhat more manageable, but there is a reason I don't make it very often.

In a large bowl, combine flour and salt. Cut in butter and shortening until you have a fine meal. Don't freak out if you still have a few large pieces, it will get incorporated later.

Add the cold water quickly and any extra you need. Add just enough until you can bring the dough together in a ball. Taking a golf-ball sized bit of dough each time, take some dough and smear it against a work surface with the heel of your hand to incorporate the butter and shortening. When it is all finished, round it back into a ball and divide in two. Wrap each tightly in plastic. Chill at least an hour before using.

In 3 tablespoons of the butter, cook the onion and mushrooms in a large pan (with a lid you will need later) over medium heat until soft. Push them to one side of the pan and add the remaining butter to the bare side. In a bowl, toss the kasha with the egg whites coating well, Add to the pan and cook, stirring constantly with a spatula until dry. Mix back into the onions and mushrooms. Add the broth and bring pan to a boil. Cover, reduce heat to simmer and cook until liquid is absorbed (about 20 minutes). Transfer to a shallow pan and cool on the counter for ten minutes before transferring to the fridge to cool completely.

In a large pot with a lid, cook everything together at a simmer, covered until carrots are soft (about 25 minutes). Remove carrots with a slotted spoon and bring sauce to a boil. Cook until reduced to a syrup. Return carrots to pot, coat well and then remove again with a slotted spoon. Cool completely before using.

Roll out as thin as possible without it tearing. If making one large kulebiaka, make two rectangles. If making two, make four. I wouldn't go smaller than that. Mound the filling in the centre layering the kasha first and the the carrots. Leave about 1 inch around on all sides. Crimp edges with a fork. Cut a hole to vent the pastry. Transfer to an ungreased baking sheet and brush with glaze-then chill 20 minutes.