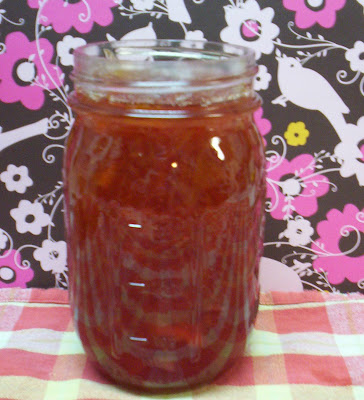 This made a whole lot of marmalade. I got 10 half pints. That's quite a bit. I know I said I wouldn't share any of my precious blood orange jellies and marmalade, but that's a bit much, even for me.

It was late when I took the photo, but it does have the most beautiful burnt orange colour. I really do feel that these oranges were worth every penny, and I have two left which I intend to eat before bed (before anyone else sees them and tries to get their filthy mitts on my Moros).

Combine everything except sugar. Bring to a boil, reduce to simmer and let cook 5 minutes. Remove from heat, cover and let stand in a cool place 12-18 hours.

Bring rapidly to a boil and cook until peels are tender. Measure peels and liquid. Add 1 cup of sugar for each cup of fruit and liquid. Stir in sugar and bring to a boil rapidly over high heat. Cook until just before the gelling point.