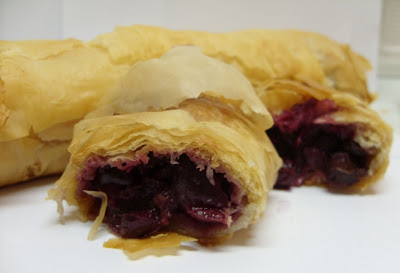 Every year when the first cherries hit the store I make a strudel. This year I made use of Phyllo dough which is admittedly, much, much easier.

When we came home from the store yesterday, I ate a few cherries and they were so delicious I told Danny that they might never make it into a strudel. He got a sort of horrified look that almost seemed pained:

"NO!" He said, rather forcefully. "You will NOT eat all the cherries. Go in the kitchen and make me a strudel, Mama!"

I swear, it was like he was channeling my mother. If it hadn't been so darn funny, I might have punished him for being rude, but I suppose I provoked it by threatening to eat all the cherries. I still can't decide if it was funny or horrifying.

It is, extremely delicious strudel. And easy, thanks to the miracle that is frozen Phyllo dough. The recipe makes two strudels which will take 1 roll of dough. Save the other roll in the package for baklava. You probably won't need all the butter, but it is better to have it ready, just in case. Keep the extra in a jar in the fridge and use it to make croûtons from the ends of your stale bread.

Lightly butter a baking sheet and preheat the oven to 350 degrees F.

Keep the phyllo dough covered with a sheet of plastic wrap and a damp towel as you work. Have your clarified butter and brush handy. Before you begin, take the breadcrumbs and toast them in a frying pan over medium heat with two tablespoons of the butter. When they are toasted, transfer them to a bowl and set aside. In another bowl, combine the raisins, cherries, zest, sugar, cinnamon and vanilla extract.

On a work surface (I use a cutting board) begin layering the phyllo brushing each layer lightly with butter-each strudel should have about ten layers. When you reach the top of ten layers, butter it, spread it generously with breadcrumbs and then in the bottom 1/4 of the sheet, spread half of the cherry mixture (try to leave the juices in the bowl, if you can). Begin rolling it up. Transfer it gently to the baking sheet and brush all over with more butter. With a very sharp knife, make five slits on the top, like scoring a French bread.

Bake for 20 minutes, then remove from oven, baste again with butter and return to continue baking another 20-25 minutes. You'll need to watch it carefully on the second half. Cool on racks.

Strudel is best the day it is made-so go ahead and make a pig of yourself. After all, they are the first cherries of the season. You have my permission.
Posted by Goody at 6:08 PM
Labels: Austrian, Cherries, Strudel

what kind of cherries?

Just plain old bing cherries. I wish we could get sour ones here. We see rainier now and then, but they're always something like seven bucks a pound.

I wondered, we only have bing here too.

Hey, I know...let's meet halfway in Michigan and get us some sour cherries!

I grew up in Indiana... our neighbor had a sour cherry tree.... my mom made some great pies. Unfortunately the next owner cut that tree down... because it was too MESSY! Such a loss... idiot people.

I'm so glad you put this one up since I have cherries in excess in the freezer.

Gotta love your Danny! That was soooo funny to read how he panicked at the thought of no cherries for a strudel! I never heard of these but anxious to get me some phyllo dough which I also have never used.

Page-oh man, people. That brings back memories of lawns in Illinois covered with fallen crabapples and persimmons that people let rot because they didn't know what to do with them.I remember my mother rescuing quinces. Beings kids, we put the crabapples to good use chucking them at each other like snowballs-and then the street would be covered with smashed fruit. But cherries-sour cherries at that-that's almost criminal.

Lisa-if you're using phyllo for the first time, expect it to be a bit tricky. You MUST let it thaw completely or it will tear. Even if the sheets tear, you cam patch them easily by layering and once you roll it up no one will know. I keep the sheets covered with both plastic wrap and a damp towel as I work-you would not believe how fast that stuff dries out. Make sure to use clarified butter even if the recipe does not call for it because it prevents the phyllo from getting too greasy.