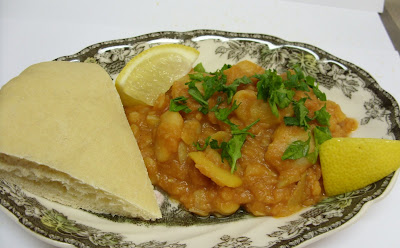 Pronounced "fool", and spelled numerous ways, this Egyptian dish makes a great deal of food for very little money. I baked some pita bread to serve with it, though any pliable flat bread would probably be great.

There was a small Middle Eastern restaurant my husband used to like in Boston that made a version of ful moudammas that he really ejoyed, though it was quite plain. I'm not sure I could see eating this as a breakfast food with a fried egg, but people do. As the recipe makes quite a bit, you'll have plenty of the stuff to try out different ways.

I removed the skins on the fava beans after soaking, but that too is optional-you lose some fibre, but gain a better texture. Your call. Set aside plenty of time for these-the beans should soak at least eight hours (preferably twelve) overnight, and will need an additional two hours of soaking after shelling before you even start the eight hours of cooking. Some recipes go even longer. In the end, your patience will be rewarded with a gigantic pot of slowly simmered fava bean stew that isn't the sort of thing you can walk into any supermarket and buy (though Middle Eastern grocers do sell it in a tin).

Sort and rinse fava beans. Place in a large bowl and cover with plenty of water (they expand quite a bit). Let soak 8-12 hours.

Drain and rinse fava beans. Remove skins by squeezing-they should pop right out. Cover shelled beans with fresh water and soak another 2 hours. Drain, and rinse.

Place beans in a large heavy pot with the chopped onion, bay leaves, and well rinsed and drained red lentils. Bring to a boil, skim away any foam and then reduce to very low heat. Cover and simmer for about eight hours. Don't keep peeking in the pot or you'll lose the heat. Check it every couple hours and give it a stir, but generally, leave it alone.

When beans are soft and falling apart, drain over a bowl to reserve the liquid. Place the liquid back in the pot, crank up the heat and cook until reduced to 1/4 of the original volume. You'll need to keep stirring so it won't scorch. Turn down the heat if you need to. While that reduces, take a small pan and fry the garlic in the olive oil until soft. Set aside to cool slightly. When the liquid has reduced, stir in the tomato paste, garlic , cumin, oil, pepper, and cayenne. Stir well and return drained beans and lentils to the pot. Mix well. At this point, taste it to see if more salt is needed (it will probably need it). Make adjustments as you see fit. Some people like a bit of paprika stirred in as well.

Cool quickly in a few shallow dishes, before moving to a single container in the fridge. Serve with bread, lemon wedges and a scattering of fresh parsley.
Posted by Goody at 12:59 PM
Labels: Fava Beans, Lentils, Middle Eastern Foods, The Magical Fruit

Is the idea to eat this cold? I have a son who loves this kind of food. When he moves back in a couple of weeks I'm going to give this one a try for him. It looks flavorful & I'm gonna add the paprika!

Either hot or cold. I served it hot with cous cous, dried fruit and yoghurt.

This looks great! I'm gonna buy some fava beans and lentils and try this one. (I'm living on the cheap these days, doncha know).

Danny really liked it, though I did sorta tell him it was made of dinosaur brains ;)

You can make it even cheaper if you maybe go half and half with the olive oil and some other sort of vegetable oil.

I bought the fava beans and lentils and things to make this. Though, the favas at the store I was at sold them in the bulk bin and they're not the really big ones and they're kinda hit and miss on the size, some broken and whatnot. Oh well. I'll make do I guess.

Gotta love herbs & spices in bulk. A buncha' bay leaves cost me FOUR CENTS instead of, what, 2 or 3 bucks for a jar of them. And cumin came to about 14 cents.

L's Ma has a laurel tree and she sends me leaves still on the branches. She's a pretty serious gardener so I get shallots and lemon verbena as well.

We buy our spices at a Middle Eastern grocer in Omaha where they package the stuff themselves, but it is still pretty cheap. The favas are a bit pricey, but it just isn't a popular bean in this part of the country. Sometimes I really miss Boston.

I hope you like it-we ate it for three days straight and L took it for lunch and before I knew it, we'd eaten the entire batch. That's a good sighn-when they finish everything without needing to disguise the leftovers.

In my experience, the smaller ones actually take longer to cook-so really soak the daylights out of them before you try getting the skins off. If you still can't do it (which happens with the small ones sometimes, toss them in a pot, bring them to a boil and then drain them-that helps. You might still need a knife. At that point, I'd just give up, and leave the skins on, but that's up to you. If you take a really sharp knife and poke it into the black spot on the soaked bean, the skin (ought to ) pop off easily.

Good luck-let me know how it turns out.

Ok, so I made it today.
Here's the story on my fava beans: there were no "shells." I bought these white hard things, like pre-shelled and dried. Should I have found fresh beans? Is this what you started with?

I soaked 'em forever, overnight or something. Then another couple hours after that initial soak. Then cooked em about 8 hours or so. Yet there are still some beans that remain al dente.. softish, but not broken down and falling apart or easily mashed.

I'm not a fan of cumin, but love it in this. Also, yogurt is an absolute must for this! Delish combo!!

Wow, you lucked out finding dried favas with the shells already off-that's perfect. Not all the beans cook down-also perfect. I'm glad you liked it.It is a bit of work, but totally worth it as it keeps and you can eat it all week.

It was actually incredibly easy. Just have to plan out the time needed to soak and cook.