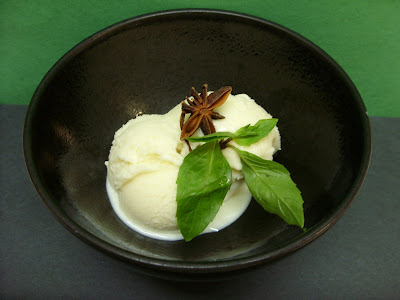 I made a few changes to the original Dorie Greenspan recipe, by using much less key lime juice, and infusing the syrup with star anise.

We're divided on this one. Predictibly, Danny hated it ( "Citrus, I hate citrus!"). mr. Eat The Blog really enjoyed it (we had it after a dinner of curry) to finish off a spicy meal, and I thought it was really tart, but my taste buds are messed-up from medicne and it is usually Thursday at the earliest before anything comes close to tasting normal. Then, I get the medication again on Saturday and everything tastes like bile until midweek. Ever wonder why it is Friday Cakeblogging, not Sunday? Exactly. Anyway, citrus always tastes bad to me now, so I don't think I'm a fair judge of this sorbet. I will say that I loved the texture from the condensed milk. I had a couple tins in the pantry left from something I expected to make at Christmas but never did. I think this might be the first time I've ever used condensed milk. It is however, very, very sweet. I think that is good given the tartness of the limes, but still-be warned.

If I were to do this again (which I might, with some alterations) I would just buy lime juice in a bottle. Standing there with numb hands trying to juice those limes with a wooden reamer over strainer was insanity. If you're hell-bent on doing it, at least give the limes a good roll on the counter-top first, pressing down hard to get more juice. You're going to need quite a few limes to get the cup the recipe called for originally. I used 3/4 cup and still thought it was plenty sour, but use your own tastes as a guide.

I made a lemon ice cream using condensed milk, but I was the only one who enjoyed it. My bro in law & husband booed it. That was the last time I tried making ice cream. One of my son's made good green tea ice cream. Only he never made alot & so I always felt deprived.

Are you ok? You mentioned meds on a regular basis. I hope you don't mind my asking. I sure hope you're ok.

I always enjoy reading your blog -It's the best!

Yep, I'm ok. I just can't eat anything from Saturday to Thursday ;)

Great for a food blog, eh?

I have a trio of autoimmune disorders that sometimes cause other problems. One of the medications (actually two of them) are real barf-o-rama fests that give you bleeding ulcers and make you anemic.

I almost never complain about it except when I'm complaining incessantly about it.

I figure I'm lucky on the pharmaceutical reactions range-I'm not hallucinating purple leprechauns or anything.

I'm glad you enjoy the blog.

Im so sorry that you have to endure such crappy side effects from the Rx's. I looked up autoimmune disease & it has so many variations as to be confusing. I've heard of poeple suffering from that for years, but it looks like its a disease where R & D is in it's infancy.

Like I said a million time. You are AMAZING and I still can't believe how much you do and enjoy your family despite the hardships you face. It's really incredible. I hope they come up with something that doesn't make you sick & is effective!

Food! Ice cream that I can eat.... I'll be back for another helping!

Lisa,
I'm not doing anything heroic, and believe me, I save my complaining for those I love the most :) I try not to spend too much time thinking about it.

Grannymar,
Glad you found something you can eat (I sure know how that goes).

Just a general food update unrelated to anything:

Bought tons of .10 cent ears of sweet white corn this week, eating two at a time. Bought 3 cucumbers today @ the filipino grocery store. I want to make a cucumber/yogurt soup (or some kind of sauce or dressing?). Got any recipes? (It's finally being around 100 degrees every day here, and cuke/yogurt/dill sounds good for the heat.)

My only advice for cucumbers is...toss them in the dustbin.

Sorry, I loathe them.

There should be tons of fresh dill around at the moment though.