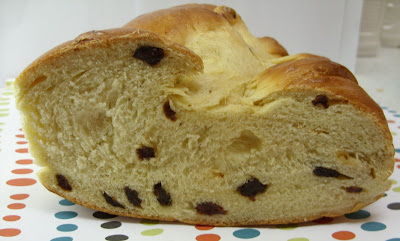 I adapted a Ruth Sirkis recipe that uses oil rather than butter and far less yeast than the challah I ordinarily make. I like this one much better. The boys didn't seem to notice, or care and were too busy eating to note the subtleties of their bread. That's OK. I noticed. That's why I'm the mama.

I had to change the recipe because it called for cake yeast, and had this insanely fiddly technique involving breaking eggs into wells and all the rest. I don't do wells. I also used bread flour, which wasn't widely available when the book was published in the early 1960's.

The true test of a good challah is whether it holds up to French toast, so I'll report back after the weekend. Danny will notice that, as he's a bit of a French toast connoisseur.

Soften the yeast in the warm water with the sugar and salt. When foamy, add the eggs, oil and a few cups of the flour beating well with a wooden spoon. Keep adding flour until you can no longer beat, and remove to a floured surface. Gradually add more flour until it is no longer sticky. Knead well. Flatten into a disk, top with raisins, then fold over on itself and begin working in the raisins. Some will keep popping out, that's fine. Place dough in an oiled bowl and turn once to coat. let rise until doubled. Punch down, let rise again for about an hour or until doubled again.

Divide into three parts and make ropes. Braid and place on a buttered baking sheet. Cover, and let rise until almost doubled-about 45 minutes. Begin preheating the oven to 350 degrees F.

Before putting the bread in the oven, brush with the egg yolk beaten with the water. Bake 20 minutes, rotate pan and continue baking another 10-20 minutes or until bread sounds hollow when rapped. I used an instant read thermometer and baked to an internal temperature of 200 degrees F.