A Quick Pizza-Introducing The Dough Truncheons! 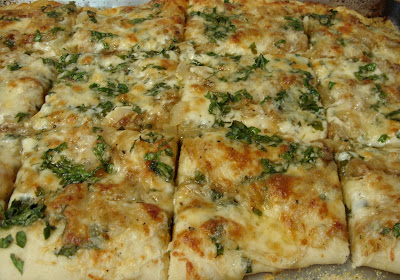 I didn't really have any dinner plans, so when Danny said he'd like a pizza for dinner I thought. "great." Pizza is always quick and you don't need much to put one together.

Looking through the bins, I had plenty of onions and parsley, so I went with carmelised onions and a generous sprinkling of chopped parsley for a topping. I combined the ends of what cheeses I had going hard in the fridge which in this case turned out to be Swiss, Mozzarella, and some Pepato. Perfect. An hour and ten minutes later, I had dinner.

Dissolve the yeast, sugar and salt in the warm water in a large bowl. Let stand about five minutes until foamy. Add the flour slowly working until you get a dough that is elastic. Knead it a good five minutes. I really slap it against the counter top which helps build the gluten with less effort than kneading. Every time I do that technique I think to myself that "Dough Truncheon" would be an awesome name for a rock band. Anyway, grab yer dough truncheon and slap that sucker against the counter until you have a decent blob of dough. Then, place it in an oiled bowl and let it rise for an hour. Punch it down, let it rest five minutes and roll it out (or stretch it if you want to be all fancy and stuff. Place it on a cornmeal dusted pan and top it with whatever you choose. Let it rise another five-ten minutes before transferring to the oven.

In a large pan, melt the butter and olive oil. Combine the onions, sugar, salt, pepper and and thyme. Stir well and cover. Cook over medium heat, stirring every once in a while to avoid sticking until it begins to brown. Reduce the heat, and cook further until carmelised.

When I top a pizza like this, I put half of the onions on the bottom layer-this help give it an oily base, and prevents it getting too burned on top. Scatter some cheese and then do a second layer. The parsley can go on top if you like.

Bake in a very hot 500 degree oven on the lowest shelf for five minutes. Move to the centre rack and then reduce the heat to 450. You will probably need another 10-15 minutes, but as always, keep an eye on it.
Posted by Goody at 5:06 PM
Labels: Bread, Cheeses, Dough Truncheon, Onions, Pizza

Obviously I'm very generic because I've never heard of eating pizza without no sauce. I'll have to give this a try since it'll be a first for me.

More often than not, I make a white pizza because making sauce is such a pain. There's enough butter and oil in the onions to keep the crust from drying out, eliminating the need for sauce.

I like red sauce pizzas, but unless I have leftover sauce on hand, it is just too much work.

Here's a sauce we LOVE and...all you do is MIX ingredients & spread. Enough for 2 pizzas.

Thanks Lisa, I'm going to keep that one handy to try.