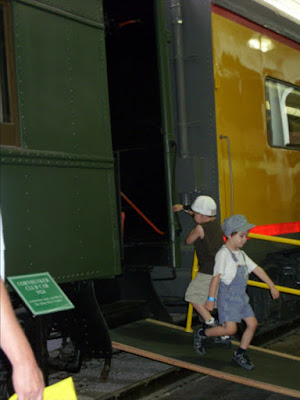 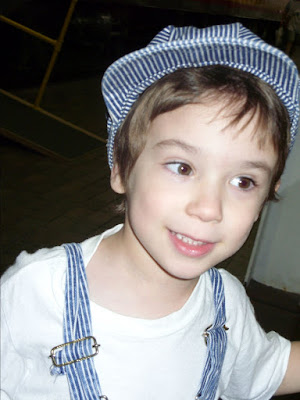 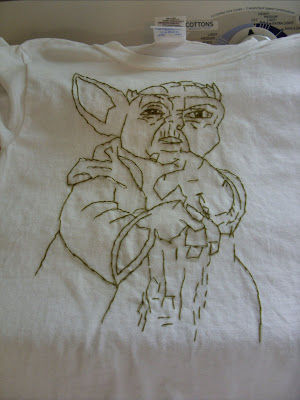 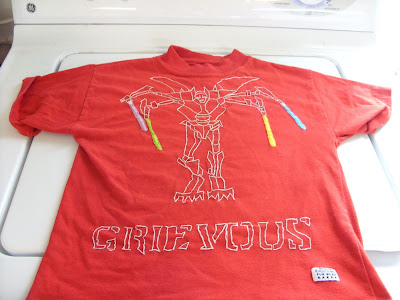 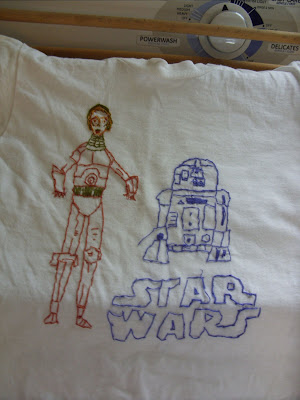 All you need are plain t-shirts, washable ink, floss and a needle. These aren't the best pictures, but you'll have to take my word for how cute they are when worn.

Last year, I was embroidering Cars characters on sweatshirts. I can only imagine what he'll want next year.

Each shirt takes a couple hours, but can be easily completed quicker without constant interruption (like that's going to happen any time in the next ten years).

Last weekend was Railroad Days in Omaha and Council Bluffs. Five museums, two days, ten bucks per family, transportation included. Sure, it was unbelievably hot, but we had a great time. Danny took his first bus ride between the museums, and being the good mother I am, I insisted we sit in the back seats (it was a school bus). I think he was pretty surprised when he went bouncing up in the air the first time. Mr. Eat The Blog bounced around too, but I won't repeat his comments. That could be a a blog unto itself.


True to my word, I let Danny eat birthday cake for breakfast on Saturday, and he nearly pooped himself with joy when he saw what we bought him. I need to explain this first-Danny has taken a liking to reruns of The A Team. I know, I know-I kept him from television for the first three years of life, and now he's nagging me to watch the A-Team and reruns of the original Battlestar Galactica from the 70's. I wish it weren't true. Lately, he's been watching Dragnet as well. I'd like to think that I can somehow turn these shows into a lesson on popular culture, but who the heck am I kidding? I have a small child that runs around saying:
"I pity the fool!"

So yeah, we went on Ebay and bid on a matchbox A-Team van from the 80's. It ended up being a buck plus shipping. Danny was impressed.

So did I ever tell you the story about Mr. T cutting down all the trees in his front yard in Lake Forest? I was working nearby and everyone was going out at lunch to gawk at him taking a chainsaw to the old trees on his property. I guess he wanted a sprawling lawn, and the neighbours didn't think he should, or something like that-it was a long time ago. I sort of like the fact he went out there with a chainsaw and did it himself. Lake Forest is a pretty WASP-y kind of old-money place-it must have terrified the locals.

Anyway, I pity the fool that doesn't go to Railroad Days next year. It is a great event.

Oh, and we came home to three scary Turkey Vultures. Yuck, I hate those things. Big, ugly birds. The photo isn't that great, but take my word for it, you don't want them around. 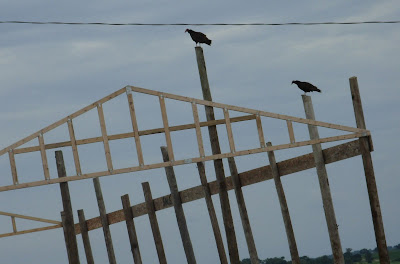 What a life! I can't believe Danny watches those 3 series at his age. You can tell he's super intelligent for his age, but Dragnet?

I had to look up cicada from your last post and THOSE suckers are UGLY & GRoss!

Enjoyed seeing all the pics. You sure are crafty. I think being a mom brings out a lot of hidden talents, huh? It was fun reading everything & i'll be sure to go to Railroad Days when I'm in Omaha next!

Seeing how Danny can watch adult shows with interest reminds me of my oldest daughter in 3rd grade. Her teacher asked the kids to write about their favorite show or movie. Everyone came back with cartoons except my daughter. She wrote, "The Dead Poet Society." She's now 27, has written for well known news publications for a few years & is now attending Georgtown Law School.

These kids with intellect are amazing to watch grow & develop into adults.

That's great, you must be proud of her. What a fantastic accomplishment.