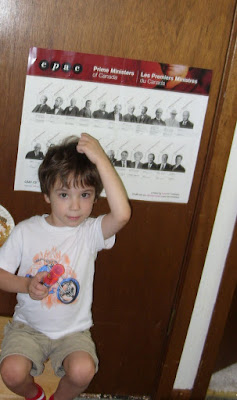 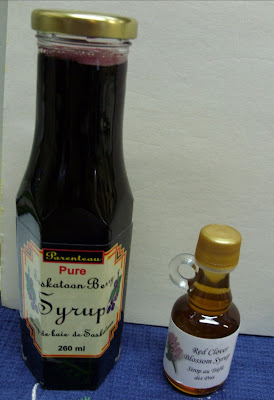 The wonderful Jenn of Musings From Baby Jail sent us a care package of books, syrups and a poster of the Canadian Prime Ministers (I requested that one).

So we put the poster up right away, at Danny's eye level and he was eager to start checking it out. A few minutes pass, and I'm doing other things when I hear Danny giggling.

Danny points to a photograph of Mackenzie Bowells and still laughing so hard he can barely speak, says:

"There's a rumbling in his bowels!"


Personally, I think literacy for four year olds is overrated, but I'm still pretty impressed he caught that and could formulate a joke. A lame joke, but a joke nonetheless.

Still looking at the poster, Danny asks me to read some of the other names that are harder to pronounce.

"Oh, and there's that handsome Pierre Trudeau." I said.
(Incredulous) "That guy? He's not handsome."
"Well, I thought he was, and so did a lot of other people..."
"He is not handsome. He's bald. Is it a bad photo?"

Somehow, I never imagined I'd be having this conversation with my little boy. I thought we'd be talking about sports, or comic books, or finger painting-not Pierre Trudeau's receding hairline.

"Now mama, he's a good looking guy" (pointing to Brian Mulroney).
"Your grandmother (my mother) used to call him "Tucchas Face."
"What?"
"Like "tushie", from the Yiddish, but not a cute tushie, but a big, fat, blubbery tucchas face."
(It's true, she used to call him that, but he does have kind of a big head)
"Well I like his hair even if he has a tuc...tuch..tucch...butt face."

Thanks again Jenn for all the wonderful books and treats.
Posted by Goody at 12:55 PM
Labels: Canada, Dannypants