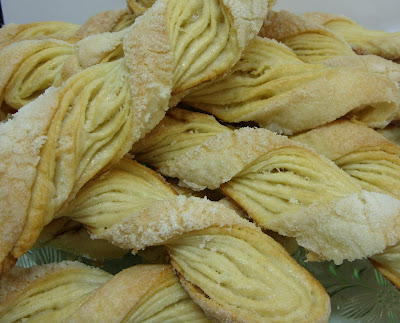 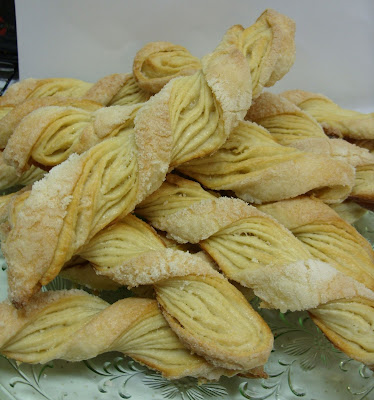 I think with a couple extra turns these rolls would have been even better-but they are pretty darn good as they are. I made mine larger than the recipe indicated as I wanted them as sweet rolls, not cookies. I will post the original instructions and you can adapt as necessary.

Like the caramel brownies, these come from the ancient Pillsbury cookie booklet. The recipe itself was the Senior First Prize Winner in Pillsbury's 8th Grand national Recipe and baking Contest. That should give you an idea how old this pamphlet is! I'm so glad I was able to dry it out and rescue it after the tornado.

I followed the directions and used vanilla sugar, but I can't help but think it would be excellent with cinnamon or cardamom. I might try these again as jam twists-wouldn't they be heavenly with some homemade apricot jam?

The recipe was clear and easy to follow. If you're not used to working with puff-style pastry this is a nice compromise as you don't have to fold the moulded butter into the dough and do numerous turns. You sacrifice flakiness, but for these, I think it works well. The crisps remind me of the sour cream cinnamon rolls we used to get in Illinois, though those were shaped in crescents and larger. That was the one pastry my mother didn't dare bring in the house because she'd eat them all. We'd split one if we were out (usually following a heavy brunch...because you've already blown a million calories, you might as well have a sour cream cinnamon roll, right?) but they were just too dangerous to have around in any quantity. I hadn't thought about them in years until I took a bite of these, and the texture immediately reminded me. Sort of like Proust eating the madeline and remembering his childhood...except I haven't felt compelled to take to bed and write thousands of pages of painfully boring prose. I still resent the time I wasted over the summer of 1982 reading that rubbish in entirety.

So....back to the Starlight Sugar Crisps (come for the recipes, stay for the off-topic blathering!). The recipe says you can get five dozen. I had just over two, but again I did them larger.

Predictably, Danny is calling them "Star Wars Sugar Crisps" and waving them around like a light sabre.

Soften the yeast in the warm water and set aside. In a large bowl, sift together the flour and salt. Cut in the butter until it is in fine pea-sized lumps. Add the yeast, sour cream, eggs and vanilla. Mix well. Cover with cling film and chill at least two hours.

Divide dough in half. Mix sugar and vanilla extract together in a bowl. On a work surface, spread about half a cup of the vanilla sugar to dust the surface. Pat out half the dough into a rectangle and then roll to a 16x8 rectangle. Fold one end of the dough over the centre. Fold other end over to make three layers. Give the dough a 1/4 turn and repeat two more times, sprinkling with additional sugar as needed. Roll dough out to 16x8 and about 1/4 inch thick. Cut into 4x1 inch strips and twist a couple times before placing on an ungreased baking sheet. Repeat process with remaining dough, or keep in the fridge for use at a later date (The recipe says dough will last four days).

Bake until golden-about 20 minutes, but start checking at 15. Remove to rack to cool.
Posted by Goody at 1:06 PM
Labels: Childhood Favourites, cookies, Mother, Pastry, Proust, Sour Cream, Too Much Butter

Starlight Sugar Crisps: Thanks! I've been searching for this recipe for years, used to make it w/ my mom from that very Pillsbury book.

Proust: Summer of 1973, I read the entire "A la recherche, etc." Best reading hours I've ever spent, even named my white mouse Marcel. He too is dead now.

I'm so glad I was able to help you locate the recipe.

Well, I always knew someone must have enjoyed reading Proust...it wasn't me, obviously ;)