Let's Stand About in the Freezing Cold 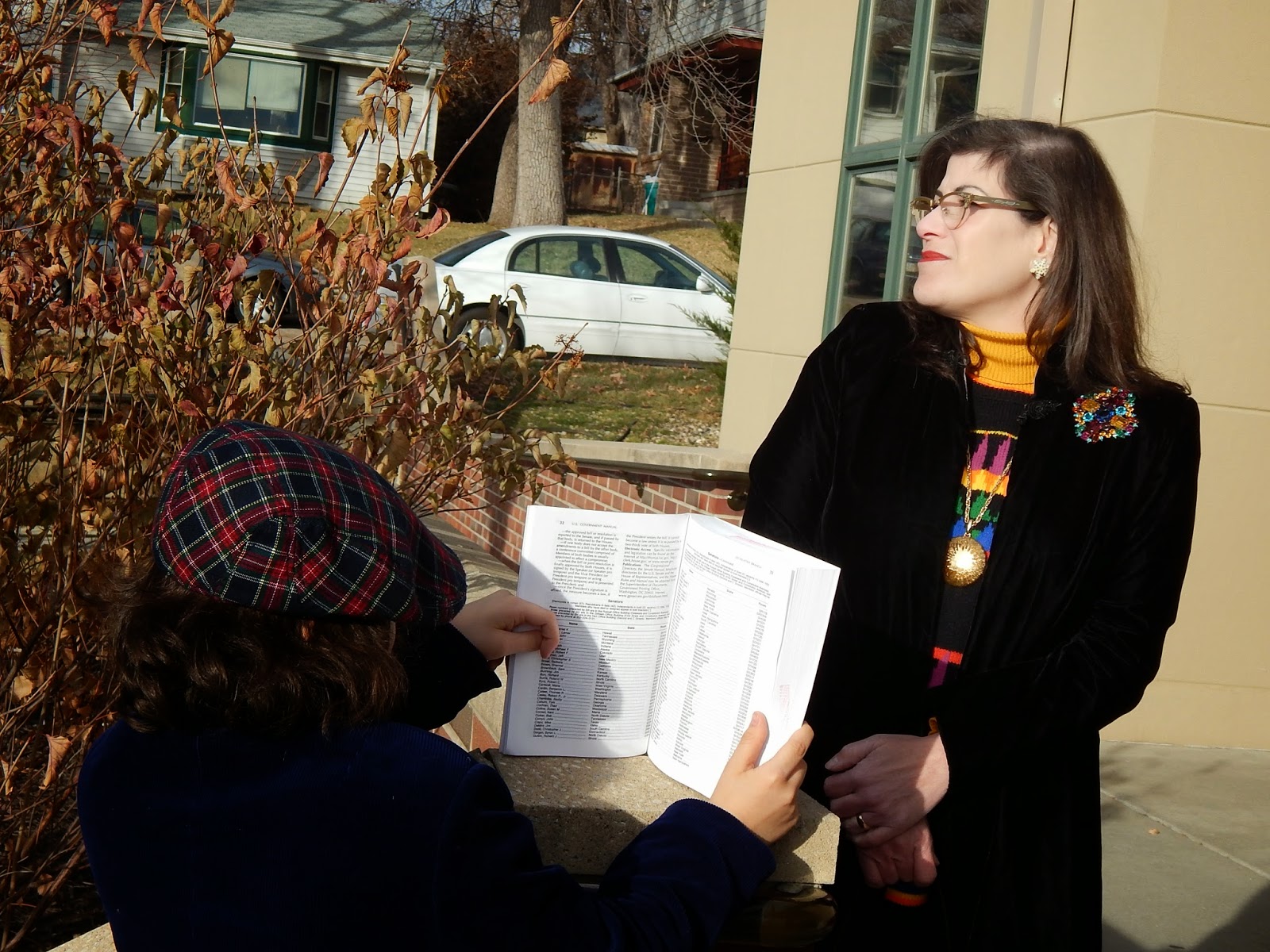 There's a library with central heating right beside us, but it is more fun to read outside in the 15 degree F. cold. Yes, yesterday's 70 degree weather was short-lived. Still, with no snow on the ground, and a clear forecast well into next week, I can't complain too much. It was a sparkly, bright day, cold or not. As we stood on the library steps, they were setting up for an outdoor Christmas concert across the street at City Hall. Someone tapped the microphone and said, "Test, test." True to form, Mr. ETB yelled back across the street, "YOU PASSED!" 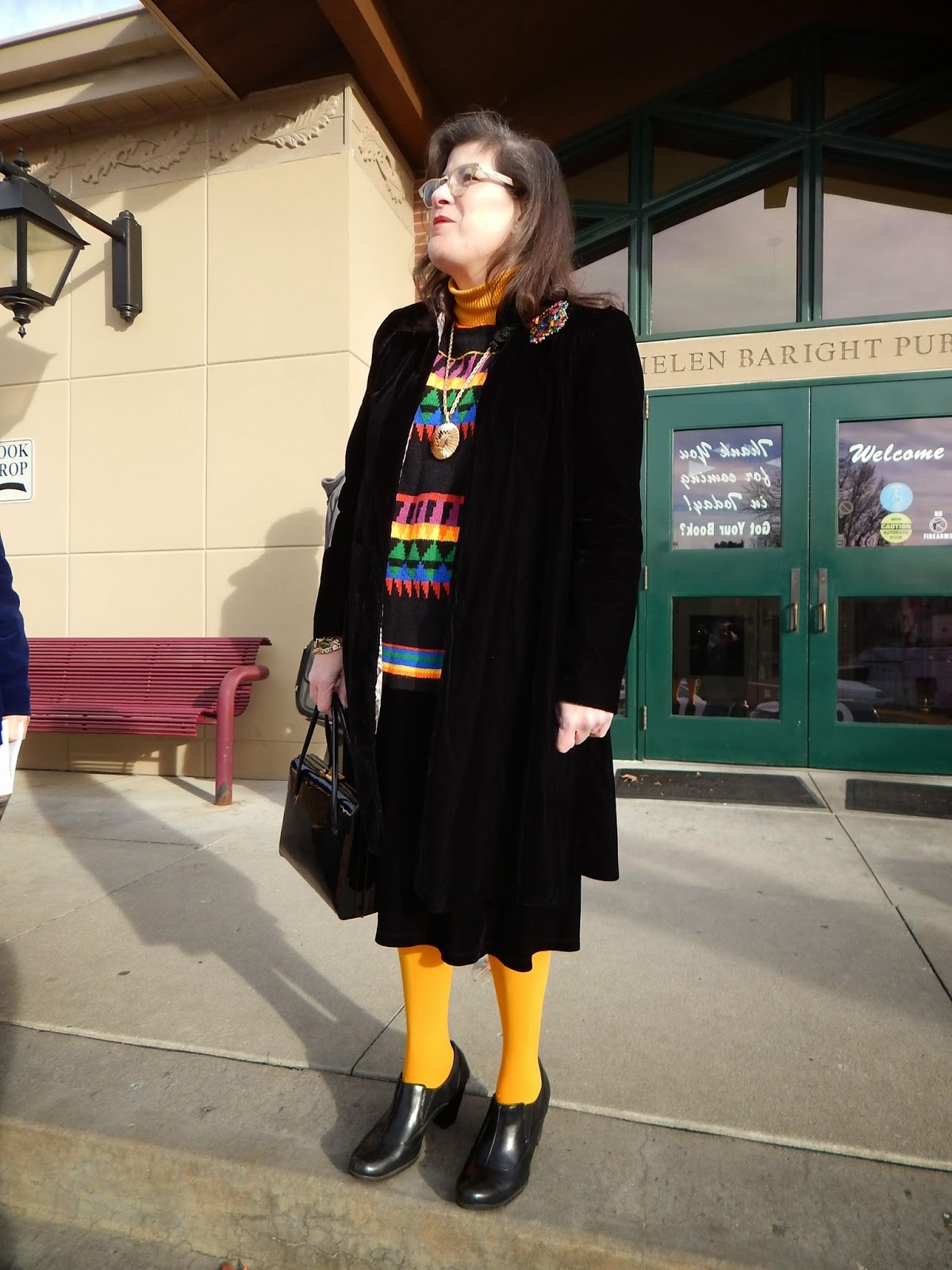 This was a new-to-me library in Ralston. They had a lovely Christmas display of those village things people collect (I can never remember what they're called, my sister was crazy for them, I should remember). There was a setup with some children sledding with a moose on the path. "Oh no, the kids are going to get charged by a moose!" I jokingly said to Danny. A humourless girl of about ten looked at us with that blank look so many children seem to have these days unless they are looking at a screen.
"You don't want to get charged by a moose." I told her. "It would likely be fatal."
She snorted and shuffled off back to the computer she had been using to play a game. Fine, but don't blame me if you get charged by an angry moose someday, and your last thoughts will be, "The lady at the library knew what she was talking about!" 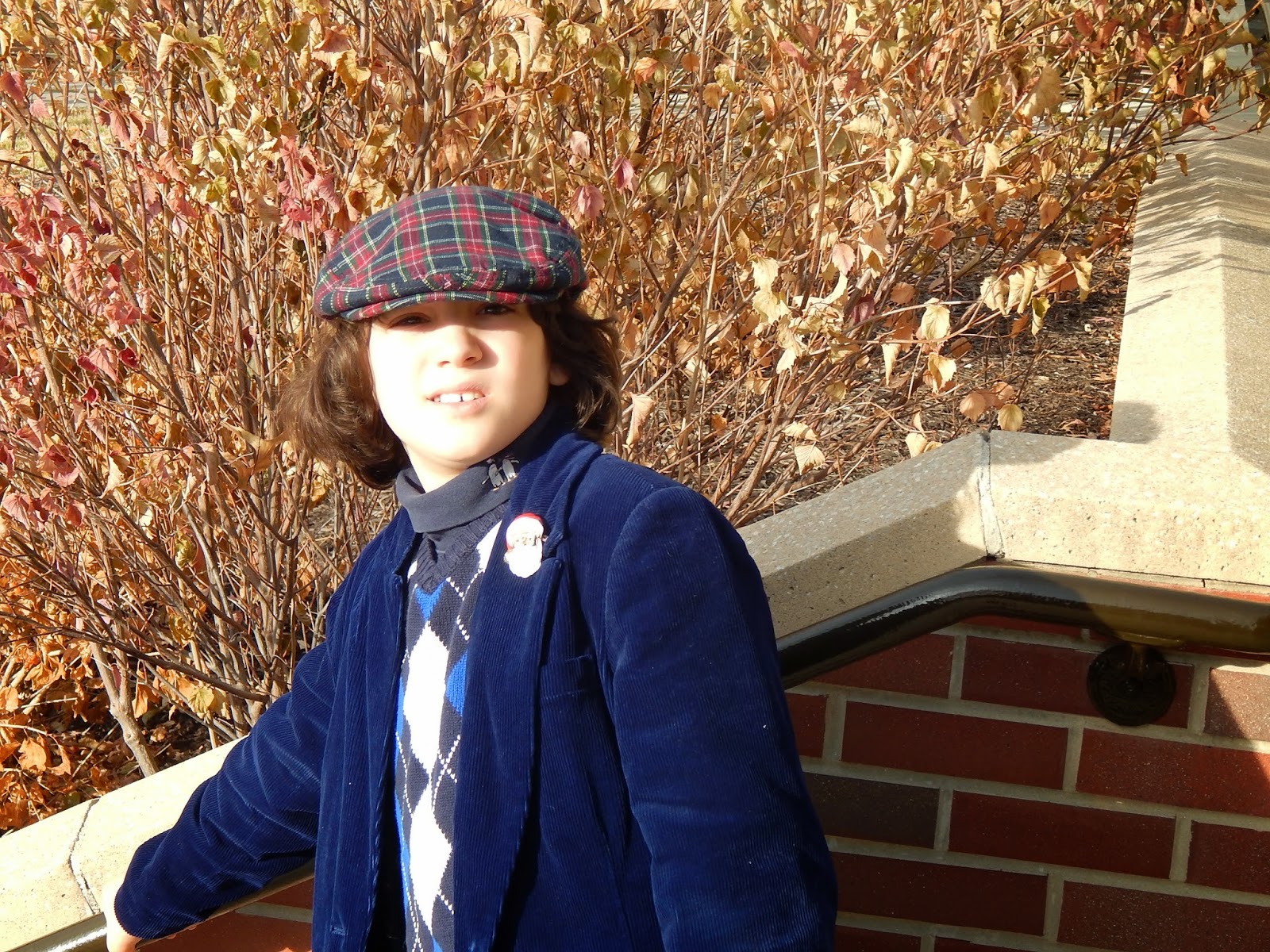 This one wants to do a Christmas display of elves stuck to a glue trap (the sort they have for catching  mice). Scrooge, much? 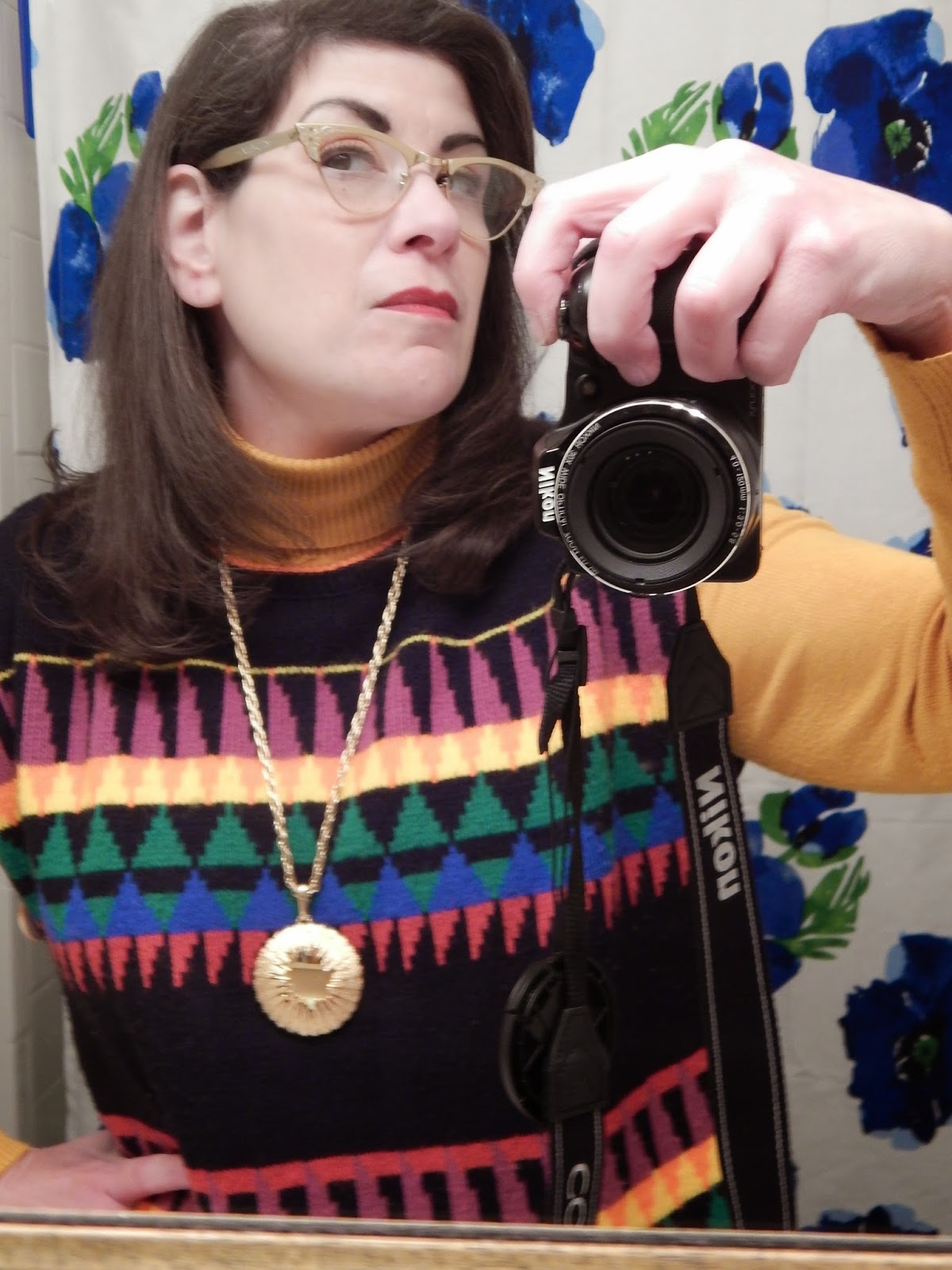 Outfit Particulars:
1970's Pullover vest (I'm not sure what to call it)-Mum's (I rescued it when she was going to discard it in the 80's. That was a good save).
Yellow poloneck-Gordman's
Velvet Skirt-Old, can't remember
Velvet and satin coat-Bought it somewhere in Boston in the early 90's
Shoes-K Mart
Tights-Walgreen's
Medallion-Hand-Me-Ups
Fragrance-Guet Apens (Guerlain)
Rhinestone brooch (on coat)-an antique shop in New Hampshire, decades ago. I remember bargaining for it, but I don't recall what I spent.
1950's patent leather handbag-Salvation Army 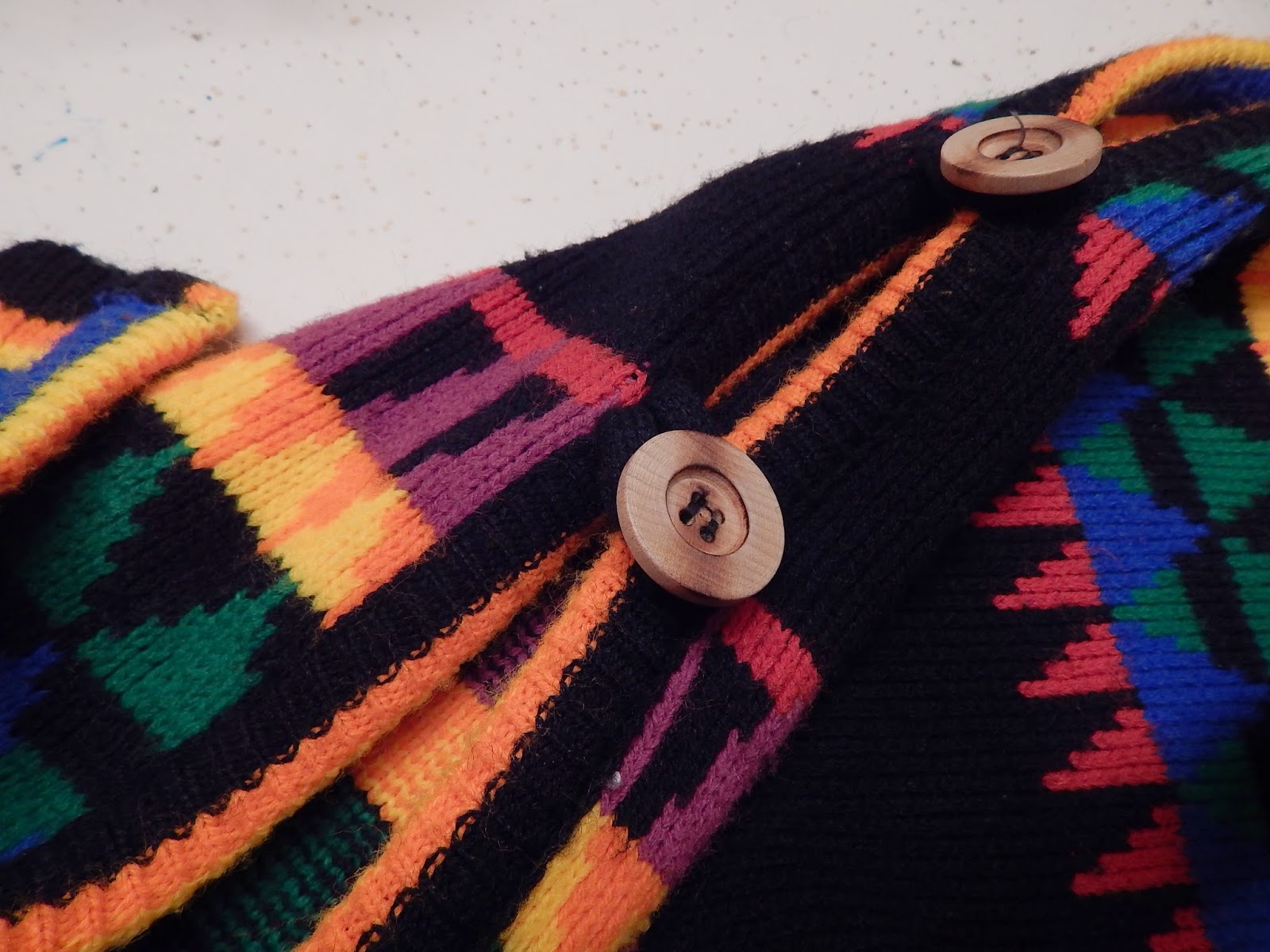 I suspect the reason this never got much wear has to do with bulk. I tried half a dozen coats until I could find one to fit over it. Being acrylic, it is also quite warm, which is fine outdoors but inside with stores blasting the heat, it can quickly become too much. Now that I have my own, er..."personal space heater",  I try to dress in layers because it looks nicer than sticking my head into the freezer section at the grocery store to cool off.

This week we continue to plod through all the readings we need completed by winter break. At some point, I want to watch Lawrence of Arabia with Danny as it fits in nicely with our WWI studies. I can't decide whether to do one long, marathon screening and devote the day to it, or if it would be better over a few days. It is a rather long film.

The Lebkuchen are baked, and ripening in a tin. Every year I bake them, and every year I swear I will never do it again, as the dough is so soft and fiddly. Still, they are the prettiest thing I bake at Christmas, and they would be missed if I skipped it.  I did (shhh, don't tell) buy two jars of purple cabbage and apples for Christmas as I am trying to cut back on the amount of work I do in December. The ingredient list sounded close to how I'd do it, and the time (and space) required for putting up cabbage each year could be better ultilised elsewhere. I didn't kill myself over Thanksgiving, so it has been a nice four-day weekend to rest ahead of the busy time ahead...which starts...

I (finally) finished making the Christmas cards that need to be sent abroad. The deadline is 2 December. Whew, made it! Now to start the locals. I really didn't think it would get done this year, what with everything going on. In the end, I went for blended crayon rather than pen and ink to save time. Crayon is a bit more forgiving than pen and ink, when working with arthritis, and it blends really well with the help of a stump and good eraser. Looking at places like Pinterest you could easily get the idea that you need expensive materials to make attractive cards, which simply isn't true. Some of the nicest cards I've made have been done with little more than construction paper and a Sharpie. Boxed cards are lovely as well, and I was set to use some of my carefully saved vintage cards this year, but somehow I was able to get it together and do my own. I know the time will come when my hands and brain will no longer even pretend to cooperate, and I can look at old artwork and see the changes (hell, I can look at my handwriting and see it) but for the present, I'll stick to my state of denial, thanks very much. Maybe I can post the cards that went horribly wrong, and won't get sent. I did a nativity scene with a sheep and donkey that looked so sinister I thought they might come to life and eat baby Jesus! I admit, for a moment I tried to come up with a caption for the sheep making jokes to the effect of, "But it says, "manger", non?" But then thought better of it. So the demented animals card isn't getting sent. There were several like that. But hey, that's when you go for stars, and wise men which are nearly impossible to screw up. Maybe I can learn to draw a lamb by Easter.

I guess I'll do a gingerbread house this year. A house, not a cathedral. That was crazy... 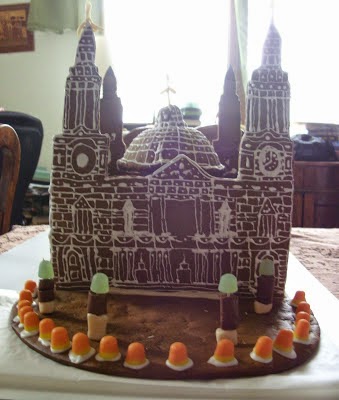 This is what happens when you let a child decide what to make. Oh, he can dream up all sorts of things, but executing his visions takes a bit of work. 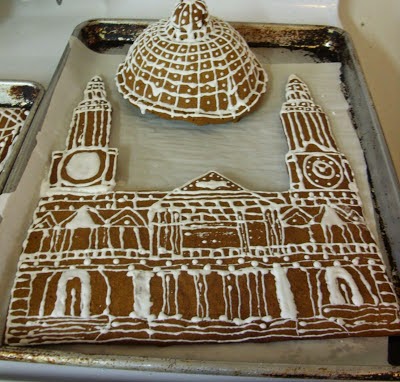 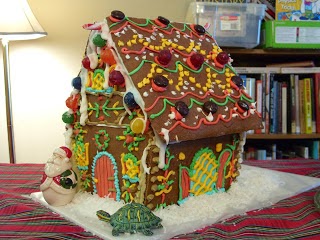 This was last year's effort. I saved the foam board template, so there's a good chance this year's house will be similar. Wait until you see what he requested for his Birthday cake. If you thought the Siege of Troy in cake was challenging (I thought it was challenging, but making a Trojan horse out of cake has some issues requiring generous use of icing sugar and toothpicks) wait until you see this year's historic event in cake. I'm pleased he's well read, until I have to recreate it in cake. 19 days to go-I'm sure I'll figure it out by then. Ten is an important Birthday-after that kids rarely want all the fuss (they just want your money).

It's the most wonderful time to drink beer  of the year. 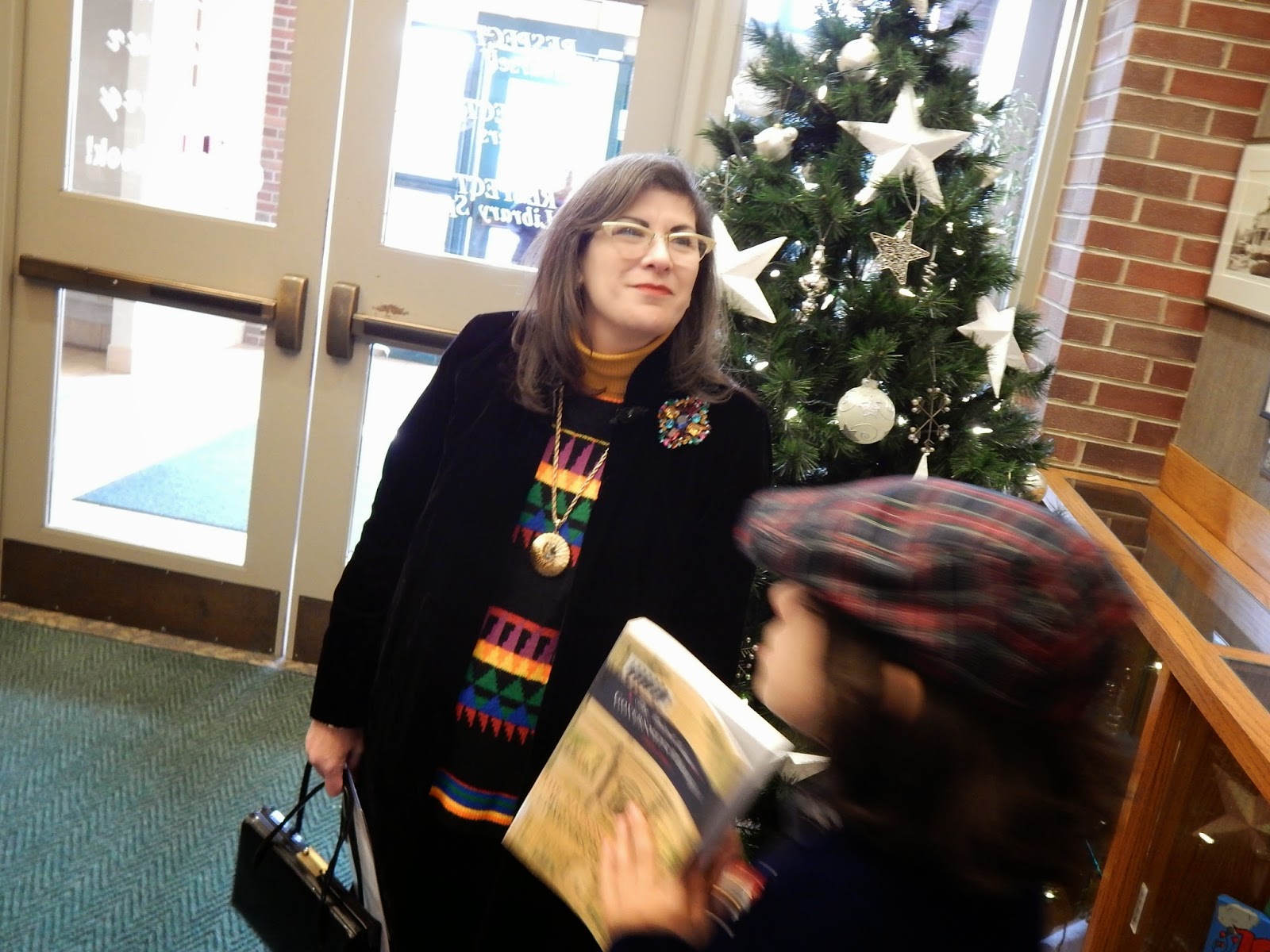 It's always a wonderful time to drink beer!

I like the idea of the elves on a glue trap. I keep seeing this bizarre 'elf on a shelf' thing online - is that an American custom, like Christmas and Black Friday? - and I'd like to glue the little gits down somewhere where I'd never see them...

Oh, the Stasi Elf-he's horrible. That one is only about ten years old, but the way it is presented you'd think it was some old tradition. The idea is you stick this elf in your house, and move him around every day...so he can take notes and report on your children.
He's there to intimidate. A Christmas tradition for the surveillance age.

I don't need a plastic elf to get good behaviour from Danny-I'm perfectly capable of intimidating him myself!

Yay! The Big Bird tights are back!
We used to make a similar gingerbread mosque for Eid. I drew the line at the Hagia Sofia.
I had no idea about the 'elf on a shelf', haven't been back to the US for Xmas in 14 yrs.
My sons have never eaten nor seen a turkey & wonder what all the fuss about a 'big chicken' is about.

Bibi said...
This comment has been removed by the author.
1:51 AM

Go Mr ETB with yelling back passed!! Love it, your entire family has good humor!! Now I am impressed with your Ginger Bread Cathedral, woo fricken hoo!! I have never made a ginger bread anything, well a batch of ginger crisps and the odd ginger loaf but no houses. Love all your bright colours with black.

Danny would appreciate the Elf on a Shelf photo I saw recently. There's a large fake spider in a corner, and it has wrapped up and is preparing to eat two of the creatures. Fabulous.

Elves stuck to a glue trap?! Yes please!!!
I'm sure a little snow would help imbue me with the spirit, but a bottle will have to do. And a teensy bite of your ginger bread cathedral! YUM! I do like ginger bread. I like ginger, generally!
Tuck a piece for me under your tree, will ya honey?! I'll be there in time for the eggnog!
XXXXXXXXXXXXXXXXXX

Hagia Sofia must have been incredible. Strangely enough, we were talking about Hagia Sofia earlier in the week (as art history, not a gingerbread project). I like the idea of a gingerbread mosque. I can imagine the reaction from the ultra conservative types. My little act of sticking it in the right wingers eyes was to buy Shirley Chisholm stamps at the post today to put on my Christmas cards.

I might as well wear the big bird tights since my body is starting to resemble him (huge belly, long legs)or maybe that's just baby Huey.

Your sons aren't missing much with a turkey. I don't understand why people don't just make a capon and be done with it instead of these huge birds you spend weeks using up?

If you're inspired to make a gingerbread house, a very nice one can be made from square wholemeal biscuits stuck together with decorator's icing. Once you stick sweets all over it, no one will know you didn't bake it.

We try not to take ourselves too seriously. I see so many people out with their kids, and they're miserable, or ignoring them and tapping away at their phones. Seems like such a waste, but some people act like laughing will kill them.

I shouldn't let it bother me, but it isn't the elf thing I can't stand, it's the people that think they're clever by buying them. If you're going to lie to your children, make it a really good story. A stupid elf isn't even trying.

@Helga
I'll have the eggnog and gingernuts waiting.

Oh boy! You guys are good with gingerbread houses! Amazing. Please don't tell my kids you can actually make them from scratch lol. I bet your son will never forget this tradition. I'm very impressed by your gingerbread house making skills!