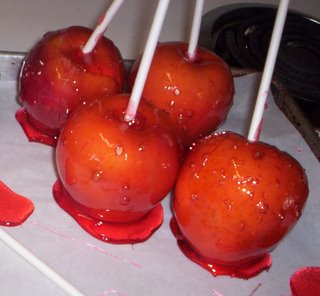 I finally achieved my lifelong goal of making candied apples. Since childhood, I’ve been fascinated by them, likely because it is the sort of thing that would not have been permitted in our home. My mother had her own “version” of candied apples that involved baking them in diet ginger ale and tossing two (and only two) cinnamon candies in the cored centre of each. Yeah, that really made a good substitution.


Wash the apples in warm water and dry well. Poke a stick into each. In a heavy bottomed pot combine sugar, corn syrup and water and stir until dissolved. Add food colouring and cloves and let cook over medium heat without stirring until it reaches 290 degrees F. on a candy thermometer(hard crack stage). Set pan over boiling water (I set the small pot in a strainer over the large pot) and quickly coat the apples. Set to dry on parchment paper. This was my first attempt and as you can see in the photograph, they are a bit sloppy-luckily, there is still plenty of time before Halloween to practise

I set my ceiling fan on high to waft the smell of cloves through the house and when Danny woke from his nap he followed the scent right to the kitchen where he stood looking up at the rosy coloured shiny apples on the counter. Excited would be an understatement.
Posted by Goody at 7:02 PM