Now I Watch the Red Line Reach That Number Again 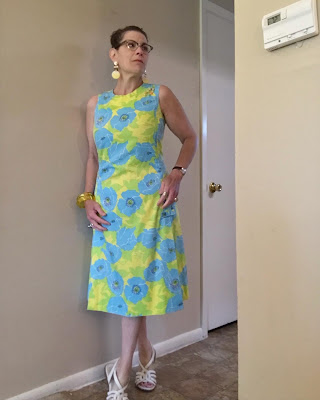 I wouldn't be a midwesterner if I didn't say it so here goes, "It isn't so much the heat as the humidity." There, I did it. It has been beastly though, hasn't it? My sympathies to everyone on the west coast and in Canada where there definitely aren't enough air conditioners to provide respite from this hellishness. I don't know how I would manage in that situation. Hopefully the "heat dome" will burst soon and life can go somewhat back to typical summer weather. Please do be safe if you're stuck in it, and remember-laying in an empty tub is cooler than a bed. I'm not kidding. We had a dog that figured that out and wouldn't let anyone near "his" bath during heatwaves. Sticking your pajamas in the freezer ten minutes before bed will help too. Anyway, 115 degrees F. is absurd anywhere, but more so in the Pacific Northwest. Hang in there. 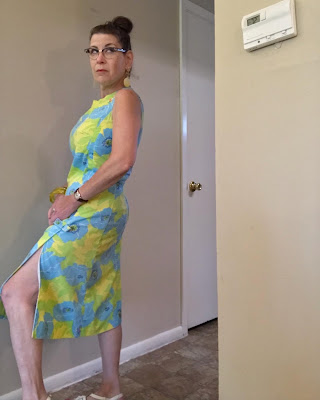 That's quite a leg slit-and there's one on the other side as well. I can't help but wonder if this 1960s Lilly Pulitzer "dress" was intended to be worn as a swimsuit cover-up. I'm rather short, so on a normal sized human, it would be quite high up. I wore it anyway because, well yeah, why not? 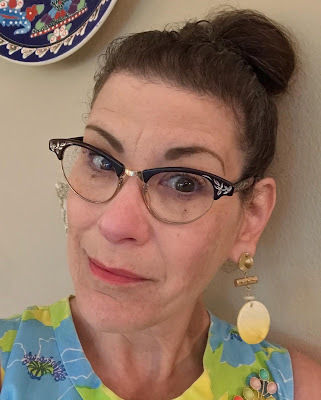 It has such a cheerful print. I don't care for the modern Lily Pulitzer dresses, but the vintage ones had some great design. 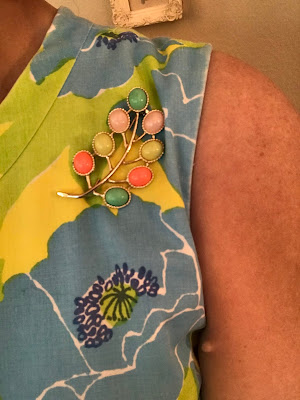 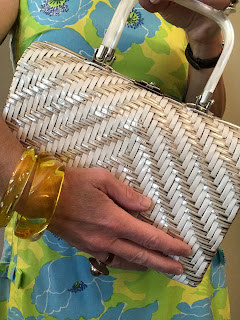 A vintage handbag from Goodwill several years ago. 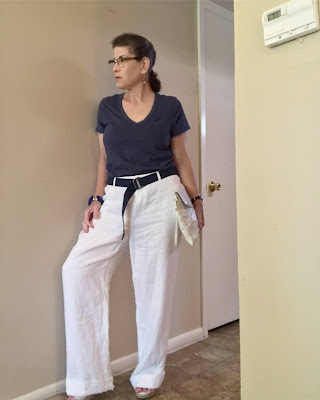 I haven't been taking many photos lately. I haven't felt like posting to Instagram, and nothing really fits well at the moment. Rather than go shopping for a bunch of clothing I don't want, I'm sort of dressing super-casual and baggy right now. My stomach is still very distended from the surgery, even after a month and it does make getting dressed a bit of a challenge. It also hurts to have anything touching the incisions, so that's rather limiting. I figure the heat of summer is as good a time as any to take a break from daily outfit pressure. I'm still getting dressed, but without much imagination. 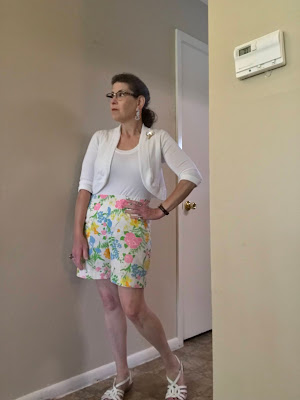 The outfits have been more like this-vintage shorts and a modern sleeveless tee shirt. Except that I'm an idiot and didn't notice until later that the tee shirt, even with a bra was completely see through. Oh well, "Free the nipple" I guess. This wouldn't have raised any eyebrows in the 70s. Yeah. Can't take the old broad anywhere. Scandalous!
I haven't cooked anything terribly interesting either, but they aren't starving and have been working their way through a large brisket I roasted. Sandwiches, salads, tacos-there's a lot you can do with a giant slab of beef. The garden keeps providing loads of cavolo nero (kale), chard, basil, lettuces, and now the first tiny tomatoes. The lemongrass continues to grow at an amazing pace, and despite the heat the mint and coriander haven't bolted. So fingers crossed, the garden keeps producing through summer and I can "shop" in the raised beds for produce. The garlic harvest was disappointing, but that's life. The sunflowers are gaining height though I doubt any will grow like last year's that reached the roof. We'll see.
I wish there was more to say, but I'm trying to stay positive on the blog and nothing I have to say would sound terribly positive at the moment so...I dunno. Free the Nipple?
Stay cool everyone.

LOOOOVE the first dress!
those colours are gorgeous and the cut - incl. the slits - is perfect!!
you look very cool in the white linen trousers - like a metropolitan gallery manager on her way to work on a hot summers day..... very cool.
in the 70 - and 80s - a young lass would´t even have worn a bra with this summery, casual shorts look.... and nobody would have blinked if "old" womens, like us, nippels were noticeable.... and now even teenagers wearing 2cm thick padding in their bras and bikinis - what makes them look like stuffed turkeys IMHO. but the worst thing about this is how women bend again to some strange patriarchal rules. "show us your body - but like a fresh scrubbed doll".
you see - its hard to stay nice for me too. sorry ;-D
much love to you! and healing vibes for your belly <3
xxxxx

The wide white trousers with the Navy top are very Ginger Rogers, ca 1936. You've even found a flat square bag to complete the look. Top it off with a white hat with a floppy brim to your shoulders and you're ready to fly down to Rio and dance the Carrioca...

Sadly, Rio is cooler than Seattle and one pities people sweltering in non-airconditioned apartments. My mother told a tale of a WWII summer like this on Brighton Beach. Her Lebanese neighbor cooled herself and a fat old Peke by hanging sheeting in the windows dipped in dishpans of water. Water wicked up, breezes blew through damp fabric, cooling ensued.

I saw a similar tactic to cool hogs used by a farm extension agent who grew up in hot region of India. As the climate map moves, there's much to learn from folks who have learned to cope, e.g. grow greens that do not bolt in the heat. (Any experience growing Malabar spinach, anyone?)

I cannot imagine temperatures that high and the humidity accompanying it but I do feel for you. You look to have kept remarkably cool, calm and collected throughout it all. I absolutely loved the first dress; the print was magnificent and so was the name of the manufacturer. Any relation to the book prize Pulitzer, I wonder?

The blue and yellow dress or cover-up is perfect on you, and you've accessorized it so nicely too. Hopefully your surgical incisions will heal soon so you can be a bit more comfortable. For what it's worth, you're still looking as stylish as ever.

It was 116 degrees here on Monday. Even when I lived in South Florida, which was an absolute hellhole for people who don't like heat and humidity, it was never this bad. We did have 2 portable AC units running on full blast, which made it somewhat tolerable, but only if you stayed very close to them at all times. One AC unit was just for all the storage boxes full of perfume. The other was for me, the hubby, and the cat. In between the rooms where the two AC units ran, there was a wall of hot, stifling air. Walking around the apartment was like walking back and forth between two refrigerators separated by a vast oven. Thank goodness it's over now. Yesterday was a relatively "balmy" 95 and today we're looking at the low 80s. :)

Glad you're keeping yourself comfortable and cool and wearing some fab clothes. I love particularly the first dress and cute brooch! and enjoying your collection of straw bags and baskets!
The shorts look really cute and the t-shirt is summery and cool (I don't care too much about sheer fabrics in the summer, it's perfectly sensible to wear thin fabrics when it's damn hot). You even have a bolero to match!
Hope you're feeling better, and taking it easy!
besos

We just got over a heat wave in Pennsylvania. So my sympathy goes out to any one stuck in one. Your outfits look summery cool and comfortable and that really is what matters while you heal. Be proud of your self for even getting dressed in the heat. It has been shift dresses mostly for me.

Beth ....... I grew Malabar spinach from seed one year on my baking summer south facing deck. It was a bit tricky to start from seed. But come July- August heat and humidity the vine really took off. I thought the leaves tasted like tough pungent swiss chard stems. The leaves looked nice though.
Best wishes,
Gail from Pa.

I am loving the acid yellow and chartreuse in that Pulitzer dress. Your slouchy trousers paired with a navy blue tee look amazingly summery & nattily nautical.
Monsoon has hit early & hard here in Nepal. It is an ongoing disaster as the caretaker government put ion place clearly doesn't care at all. Tiny municipalities here are left to fend for themselves as not only Covid ravages this Himalayan nation but flood and landslides too. Just to add insult to injury: I ordered 1,000 finger oximeters from Ali Baba 3 months ago to hand out at a sidewalk triage center at the local nursing schoool we had planned, I got 1,000 finger glucometers!!! Ugh.

RUDE! It's all legs and boobs round your blog!

That Lilly Pulitzer is great. The colours look great on you When I wear wrap dresses, I always figure as long as I've got my good pants on underneath, everything will be fine... (Also, that Sarah Coventry brooch was a bargain.)

I'm sorry to hear your stomach is still sore from the surgery. It must be rotten. I put a little present in the post to you over the weekend - just something to make you smile as you've been having a rough time - and have a horrible feeling I left the price tag on it, so please just snip it off and don't look at the price when it arrives!

@Beate
I laughed at "Stuffed turkeys" but you are so right.

@Beth
That contraption is called a "Swamp cooler" in these parts. And they do work!

@Ann
After a year at home maybe we all need to normalise not wearing bras.

@Vronni
I think she was, and sold clothing to socialite friends in Florida.

@Emily
That sounds awful. Window units do a pretty good job-that's all we ever had until we moved to this place but obviously there's a limit. I hope that was just a fluke and you're done with it now.

@Vix
I got my first bra at 10! We're so strange in the American midwest. If I'm reading that right that Krista is now an ex-American, good for her. I would think the last four years caused a lot of people to reconsider staying here.

@Gail
This has been a strange summer.
I've never heard of malabar spinach, so now I'm off to google.

@Bibi
I guess you're all set if there's a diabetes outbreak. Gah, I'm so sorry.