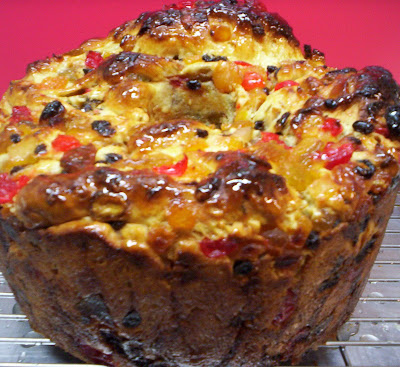 Sometimes I look at the things that come out of my oven and can't believe I baked them. That's not bragging, it is genuine disbelief. I didn't grow up around great cooks and bakers, and I didn't really start baking regularly until we moved out to the country. I'll try to post better daylight pictures of the bread tomorrow, and maybe a sliced interior photo as well-believe me, the picture does not do this bread justice.

So hey, did I ever tell you the story about the place in the North End that had a mouldy panettone sitting in the window for something like three years? Mr. Eat The Blog used to check it out every time we had to go that way, and sure enough, there it sat in fuzzy green glory. Don't worry, this panettone won't go mouldy-it won't last long enough. Before the thing is even cooled you'll have people poking their noses into the kitchen wanting to know what smells so good.

I started with a recipe and then promptly disregarded it. What's the point of baking panettone if you're not going to fill it with wonderful, colourful fruit? I also lacked a proper panettone pan. I could have used a large coffee tin with a foil collar extended up the top-but I didn't. That's pretty much why I never bake julekage either-lack of pan. I do have a couple of tube pans, one of which I'm rather fond-so I pressed it into service for this and it worked just fine. If you really must have a mushroom topped loaf, go ahead and do the coffee tin thing, but for heaven's sake-line it with parchment because I can't trust what they manufacture things with these days and I have no idea if it is even heat resistant-in other words, use coffee tins at your risk. A deep souffle dish would work too, but again, you'll have to mess around with foil over the top.

With all the baking I've been doing I ran short of candied cherries, so I substituted half with maraschino and it was fine. You may prefer to use less fruit, or more fruit, or different fruit and that's really the beauty of a recipe like this-the versatility. I did not use liquor to soak the fruit because I didn't have anything anisette flavoured. Instead, I added a tablespoon of fennel seeds to the soaking fruit and that worked just fine.

I'm not going to lie-this is time consuming and quite a bit of work. I would save it for a day when you plan to be home.

Glaze:
1/4 cup of the soaking water from the fruit and the three tablespoons of reserved sugar. You can round up with water if you don't have enough soaking liquid. Bring it to a boil and remove from heat. Strain it through a fine sieve into a measuring glass.

In a bowl, soak the fruits and fennel seeds for half an hour until plump. You don't need to soak the cherries and citron.

Heat the milk in a saucepan until lukewarm. Place in a bowl with the warm water, 1/2 teaspoon sugar and the yeast. Let stand a minute and then stir to dissolve. Let stand about five minutes until it begins to proof. Add 1/2 cup of the bread flour and stir until smooth. Cover and let rest 30 minutes.

Stir the melted butter, 1/2 cup of sugar, salt, eggs and yolks, and orange zest into flour mixture. Add remaining bread flour and mix well. Add the purpose flour a cup at a time until it comes together in a ball. Remove from bowl and knead until smooth adding more flour if needed. Place in a buttered bowl, give it a turn and the cover. Let rise 1-2 hours or until doubled. Punch dough down, give it a fold and then return it to the bowl for another hour.

Remove bread from bowl. Drain fruit reserving liquid. Flatten dough into a large rectangle and top with half the fruit. Fold, and top with the rest of the fruit. Begin kneading it in( this will be a mess in the beginning, but persevere as it will event come together).

Fit the dough into a well-buttered tube pan (or 2 large coffee tins, etc.) trying to keep the dough as even in level as possible (you won't get it perfect so don't obsess over it). Cover with a towel and let rise another 60-90 minutes or until doubled.

Preheat the o 400 degrees F. Move a rack down to accommodate the tall bread. If using a tube pan, place it atop a baking sheet (butter drips, ya know). Bake it for 10 minutes and then turn the heat down to 350. The bread can take anywhere from 30 minutes to an hour depending on the size of the pan and whether you make one loaf or two. It may begin to get too dark before it is fully baked inside-just cover it loosely with a piece of foil and keep baking. You'll need a large wooden skewer to test for doneness and really, you need to watch it as it can go from wet batter to over baked in a matter of a few minutes depending on how much fruit you used and how moist it is. While the bread bakes, make the glaze.

When bread is done, cool in the pan on a rack for 5 minutes. Then run a knife around the inside and very carefully remove. Immediately glaze the hot bread with the syrup, giving it a generous coating (or three). Let stand until completely cool and dry. Store wrapped tightly in foil.
Posted by Goody at 5:07 PM
Labels: Bread, Breads, Christmas, Dried Fruit, Holiday Fare, Italian

I am never going to make this, because the fruit thing makes me think about the one and only thing that Mother made each and every year: English white fruitcake with all those candied fruit, then wrapped in booze soaked cheesecloth. We wanted sugar cookies with frosting, but no ... booze soaked bread. Yum. Ee.

I'm totally adding you to my google reader, because you have a healthy sarcastic edge to your writing which I so enjoy. And, hey, Nebraska, right? I grew up in Kansas and live in Minnesota. Always looking for midwesterners who make me laugh.

The spritz came out wonderful. Just the right recipe. I even figured out the cookie press (which I didn't find at the thrift store, because I found it first on sale at Kohls, and because in the urban Minneapolis environment around the holidays, good luck finding such a thing.

Heh. I think our mothers might have been related, though I've come to appreciate soaking things in booze as I've gotten old(er).

I bookmarked your blog as well-so strange how you end up finding kindred spirits through the "internets."