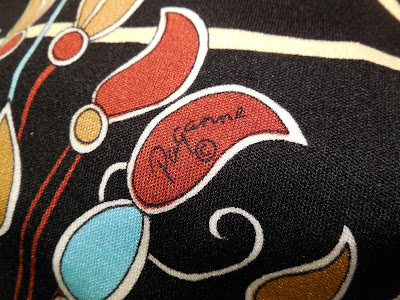 I was excited to score an original Paganne be By Gene Berk skirt at Goodwill for .99 cents until I got it home and realised it had once been a maxi, and was butchered in the re-fashioning. I suppose for a buck, I really can't be that disappointed. I will wear it as it is still a beautiful print but I do need to take it apart and try to fix the badly sewn waistband pieced together from a hem pattern. Sigh. I understand wanting to make something more fashionable, but if you must alter vintage-ask for help if you can't sew! What was done to this Paganne was a crime against fabric. 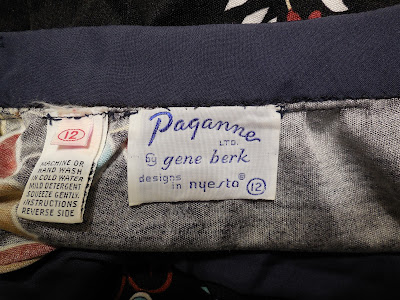 My Home Economics teacher would have a stroke if she saw that waistband. I won't show you the worst of it-it is too upsetting. 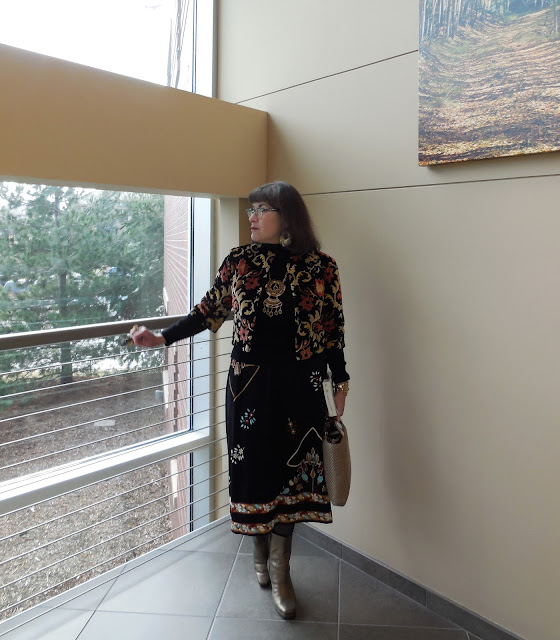 Never underestimate my determination to make something work! I did manage to put together an outfit that showcased the print of the skirt without causing anyone's eye to notice the uneven seams. 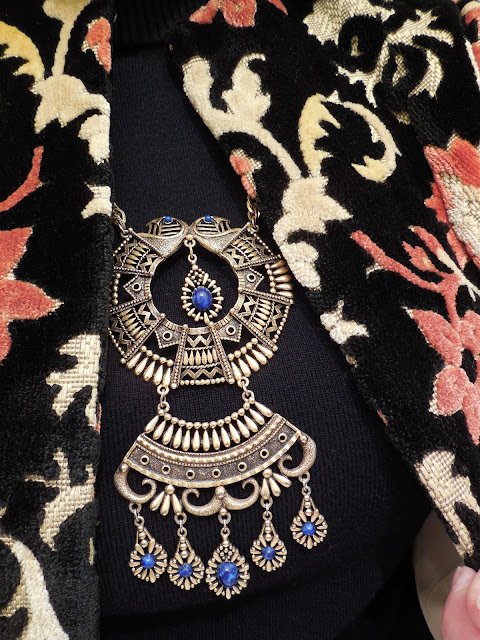 Personally, when in doubt, I go for big necklaces. 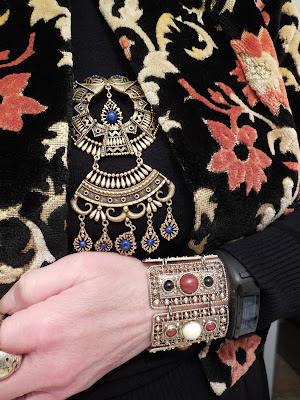 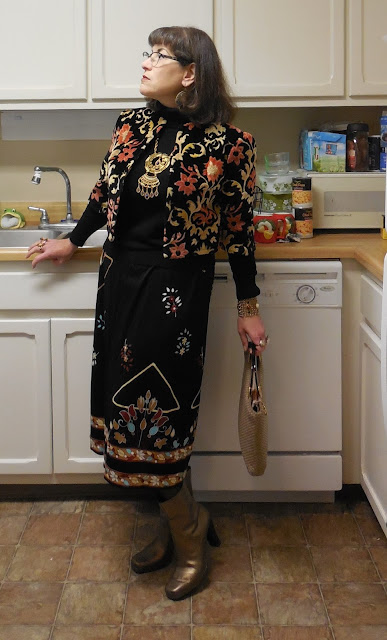 I adore these boots. I wasn't sure I'd be able to walk in them, but they're as comfortable as can be, and as fate would have it-very on-trend. Boots go in and out of fashion, and I generally wear what I like, but it was kind of a thrill to get something that ticks two trends (metallic and low boot) at once. Paying $3.99 was even better. 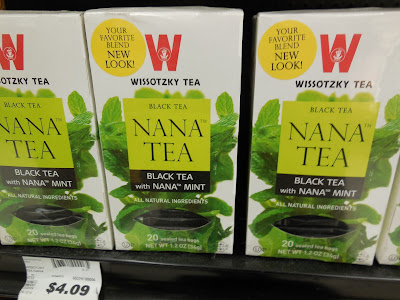 Saw this tea at the Family Fare supermarket. I love the idea of a tea made just for nanas! Unfortunately, it turns out, Nana is a type of mint. Boo. Ah well, my nana drank Swee Touch Nee tea anyway, 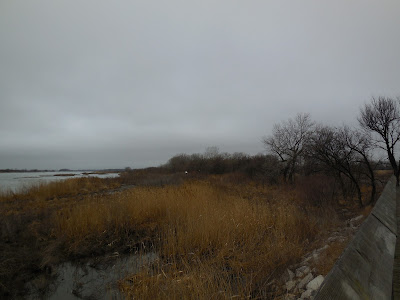 We made it to Gibbon, Nebraska to see the crane migration. there are no cranes in this photo, but there's an egret.
We all have our egrets... 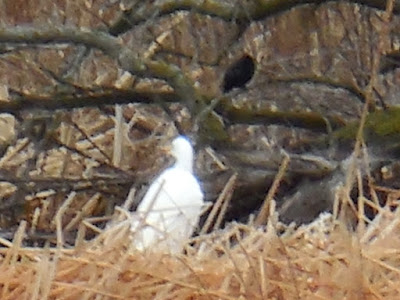 Danny has better photos that I'll share when he's done with them-he saw a pair of whooping cranes, as well as what he thinks was a common crane among the Sandhill cranes. They're just big birds to me, but he's shared the photos with people that know about that sort of thing, so it is all very exciting for him. On the way home, the thermostat in the car gave up, and we just made it to our driveway when the light came on saying, "Stop now or your car will fall apart" or something like that. We knew something was wrong when the de-fogger wouldn't work and we had to keep wiping down the windows. No matter, I'm just pleased it didn't happen in the middle of the Crane Trust (would have been a two and a half hour tow home). Upon arrival in Gibbon, I broke out in hives! They went away as soon as we headed a few miles to the east. But hey, Whooping Cranes! 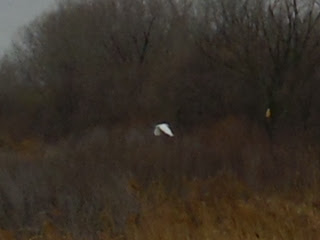 As I've been awake since 4 AM, I'm going to fly away to bed now. Hope you're having a nice weekend.

Your outfit is fabulous, despite the butchered waistband.

The beauty of a stuffed up waistband is being able to conceal it with other clothes, where as a wonky hem job is not so easy. HA! Love how you put that outfit together and the idea of a big necklace is a good one. I don't like high necklines on me, makes the girls look too big so I put a long necklace on to form a Vee. Anyway, that outfit is a winner. Hope your car is ok, and so looking forward to Danny's photos.

Wow, that print looks rather tame & unbusy for a Paganne. I love how you've styled it though! (wonky alterations and all).

Before I opened this post I was guessing it was going to be about perfume - Paganne sounds like a good name for perfume. Then I remembered you weren't wearing any at the moment.

I have never heard of this make but the maxi dress must have been spectacular. I absolutely love this outfit on you. The tapestry jacket is gorgeous and it reminds me I do not have any tapestry items in my wardrobe. I must try and seek some out...
The boots are brilliant and I'm like you - if in doubt add a big necklace.

At least they didn't cut the bottom off the skirt, I guess. Odd that they hacked it about but still kept the label intact. You have definitely made a 'silk purse' outfit with it.

@Radostin
Thank you. Hopefully it isn't too obvious in person.

@Sue
You have the best collection of long necklaces.
The car was thankfully still under warranty-which saved us a cool $900.00, so I'm VERY relieved.

@Bibi
I wonder what the top looked like originally?

@Veronica
You're right-that would be a good name for a perfume.
Paganne was for rich hippies-real hippies couldn't afford it!

@Mim
They did-the hem is sewn back on. I didn't notice it right away.

@Vix
I think the brand has been recently resurrected and that lion is showing up on newer dresses online. I wish they'd bring back the Mayan calendar print-that's my "Holy Grail" dress.

Oh, I don't think it's noticeable at all! I meant "despite your secret knowledge of the butchered waistband", not "even though we can all see someone's been slicing at your middle"! My apologies if my wording suggested otherwise!
Also, given your gorgeous jacket, thought you might get a kick out of this: http://miavesper.com/shop/ (nout to do with me, just something I came across).

Ha-no problem. I didn't read it that way. I'm getting old and typing what I mean is almost as hard as talking!

Phew! :) I would hate to have inadvertently caused offence, which is always the opposite of what I mean! (If you can't say anything nice...)