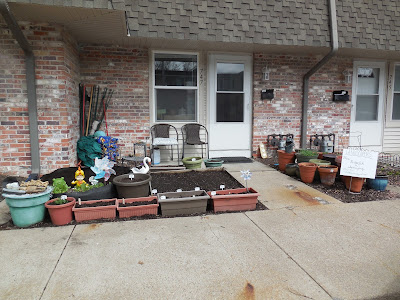 Most of my early garden is planted. I'm late this year, but the weather has been uncooperative. The sorrel from the previous three years is back in full swing. Seriously, you cannot kill sorrel. We took a trip to the garden centre for seed potatoes and decided on Yukon Gold. I've never grown Yukons, but they're Mr. ETB's favourites so it seemed worth a try. They mature early. I have a large bag bed to grow them in.

One thing I love about Mulhall's is the longevity of the employees. Many have been there for years, and they not only remember customers by name, but by garden as well. They ask after your perennials the way some people ask about your children. I could buy less expensive plants at a big-box home store, but they wouldn't know about the strange micro-zones in my garden. They also wouldn't replace plants that die. Mulhall's is my, "Happy Place" where I go to escape life-you don't get that at Home Depot. Well, I don't.

This year's early garden so far: 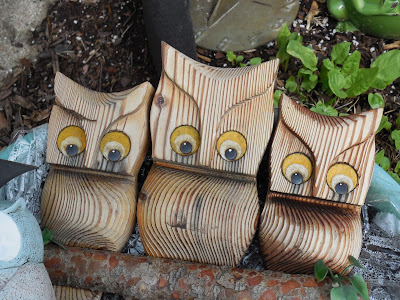 The Nebraska Statewide Arboretum has their plant sale at the end of April, so we'll pick up herbs like sage, basil and thyme there. I like to support the programme. 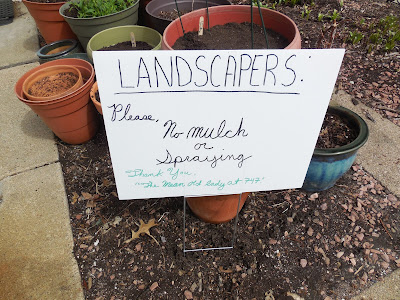 Signing it, "Thank you, the mean old lady in 747" might be encouragement for them to remember. Last year one of the kids they hired stood and picked all the morning glories off the trellis as he'd confused it for a flowering, vining weed! I heard them out with mowers early this morning, so I raced outside to plant the sign in the front garden. So far, so good. 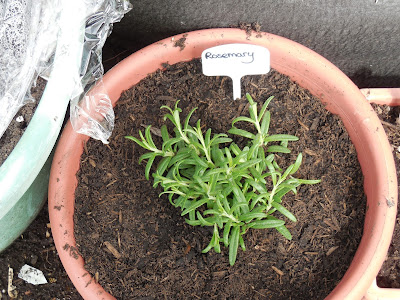 As for the heat of summer-I'm undecided. Probably some tomatoes, beans, possibly corn. Definitely more lettuce. We have such radically different growing conditions from the front and back of the house due to the large maple tree's shade that we can grow a wide variety of items. Last summer I planted loads of red salvia and it brought out several hummingbirds, so we'll probably try that again. The sweet woodruff didn't do well, so we'll give up on that. 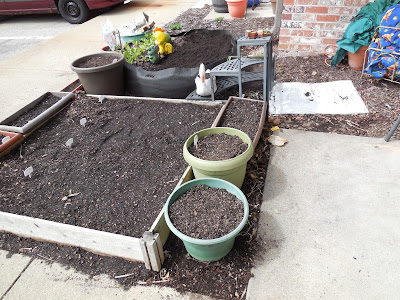 Eventually, the tiered stand will have pots of herbs. We can still get freezing temperatures until around the middle of May, so I keep the fleeces ready in a corner of the garden for cool nights. This weekend, I'll tackle the back garden. 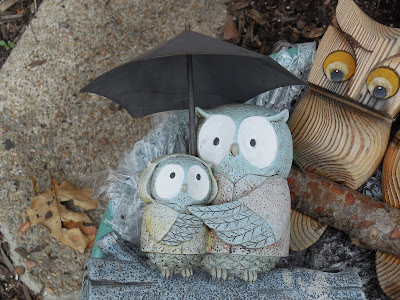 All that's left to do is wait for the rain. The wee owl needs the raincoat and umbrella or he'd turn into a moist owlette.

Have a lovely weekend.

Look forward to your reports about the spinach and mesclum mix. Nope, never could persuade sweet woodruff to do anything for me -- yet a friend had a plant that became a shrub. Might I suggest you also investigate rainbow chard? Good stuff and very attractive!

You're right-chard is beautiful in a garden. I don't know why I don't grow it-I should as it is expensive to buy.

The lettuce mixes work well in pots if you keep sowing every few weeks. I don't have room for large head lettuces, so cutting mixes it is.

You are so organised! I too look forward to seeing the outcome of your planting, you know how much I enjoy gardening!!

Your garden is most impressive! Do you really grow poppies for seed? And are they really blue? How wonderful, if so, on both accounts.

I love your owls! Are they a family?

How very organised you are in your garden and that sounds like a wonderful array of goodies to grow. Good luck with it all!

WAAAH I miss having a garden with a veggie patch. I'm looking forward to seeing how yours grows.

We had a home & garden store called Yardbird's that sounds a lot like Mulhall's. Always a treat to shop there.
How cool that your complex allows you to grow whatever you want in the beds out front your door. So many complexes & 'gated communities have soo many restrictive rules.
You'll love the Yukon Golds, they are quite prolific & pest resistant too.
Love your little garden ornament collection, someone stole a wooden Buddha from our yard (grrrr!)
looking forward to more garden updates!

In a last few years I become interested in gardening. Like all my interest I start in a big way but my start in gardening didn't involved spending fortune. Still I got some exotic vegetables that produced enough to feed my street. Since all my interest are in grandiose proportion I even plant vegetable garden im my relative's garden. They live in the most expensive part of Melbourne Toorak.Even have professional garden person who hates me.My elderly relatives adore my enthusiasm .Enough about me.Your garden looks good and interesting. Ornaments every garden is boring without them. Do you have Jade plant ?Well another name is Money Plant.Y
?

You have been busy! The sun's out this morning so I think you've inspired me to gt cracking in ours! x

That's an impressive amount of gardening. I've planted some tomato seeds and whacked a few more plants in the flowerbeds, but that's it.

I'm always baffled by the rules American housing estates have - very few British ones have any. (Which is good, as currently my patio out the back is home to the old sofa and an ancient coffee table, and the cats aren't going to be best pleased when either gets taken away.)

PS Don't plant as much chard as you think you'll need. It grows like a demon.

@Sue
I'm after one of those tiered lettuce planters you have where you water the top row and it trickles down. If I can't find something I might have to get out boards and nails!

!Ann
Funny as it sounds, I have a better garden in this small space than I did in our large garden on the farm. I tend to use the vertical space more here, but I also don't have to worry about everything dying when a neighbouring farm sprays herbicide and the wind drifts it.

@Radostin
This is the first year I've grown poppies, and yes-they produce a seed pod that you can harvest and dry out. I just hope some stupid neighbourhood teenager doesn't think they're the narcotic sort and steal them all!

@Veronica
The wooden owls are a family (there's an owlet as well, but he's out of the photo range. The umbrella pair hold a rain gauge.

@Miss Magpie
I've had very good luck growing lettuces in containers. I know it isn't exactly the same, but it might produce enough salad greens to feel like you have a garden.

@Bibi
We actually are a gated community as the complex is part of the college next door and we share security guards, etc. That didn't stop my car being broken into, but whatever.

They're very lax about what we plant, and there's a community garden as well. The only obsession they seem to have is keeping brooms inside (?!?). I've lived in condo situations where the board really got punitive over minor things, but it was largely made up of retired people that frankly had nothing better to do all day than harass other residents. I do expect that one day this will change, and I'll have to deal with it, but for the moment I've only heard nice things about the garden. My young neighbours next door have put in a raised bed this year as well, so I like to think I'm being a good influence.

Stealing a Buddha seems like a bad karma sort of thing to do.

@Hope
How wonderful that you have a thriving garden! I would imagine in your climate you can grow all manner of beautiful and exotic things. I'm sure your neighbours adore you (even the gardener).

We had a large jade plant when I was a child and it was my job to dust it each week-leaf by leaf. NEVER again! My mum ruined those for me;)

@Vix
The thing I like best about your garden is the variety of planters you have-and your cyclamen. I can't manage to grow them. Last year you inspired me to make some bunting from a vinyl tablecloth, and it looked great all summer.

@Mim
Yeah, Americans are big on rules-the Puritan ideas live on in the strangest of ways. There are regulations about how long the yard grass can be, and if it isn't to code in the city you can get a ticket. As the city has little budget for enforcement of these things it comes down to neighbours reporting each other like some sort of yard-Sasi. The idea of someone heading out, ruler in hand to measure someone's grass to see if it is 4.1 inches rather than 4 is discouraging, but unfortunately the world we live in. I don't rat out my neighbours, but that's me.