So, Chicken Boy won 1st place in the youth Cluck Off at the Wayne, NE Chicken Show for the second year in a row. Next year he'll have to compete as an adult, but this year he's still basking in his 15 minutes of fame and making plans for the $100.00  prize money.
I mean, he had to give interviews to the media. Anyway, it was a great time if a bit exhausting as it is a long drive and we spent hours out in the sun. 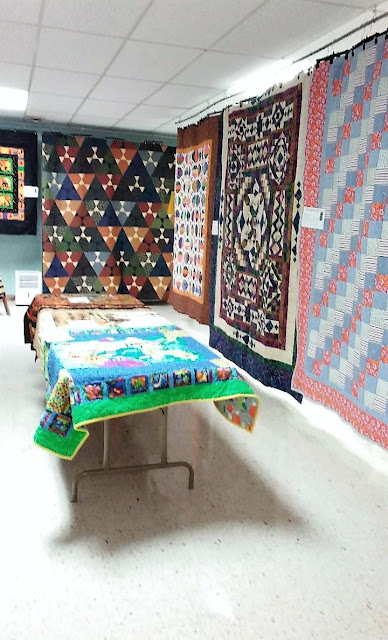 As we do each year, we stopped in to see the quilt show and entered the raffle for a special chicken show themed quilt. I didn't win (again) but I'm always happy to see the incredibly creative works on display. 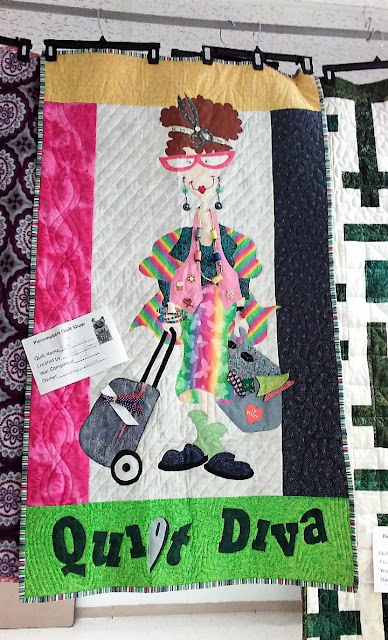 Look, they put me on a quilt! 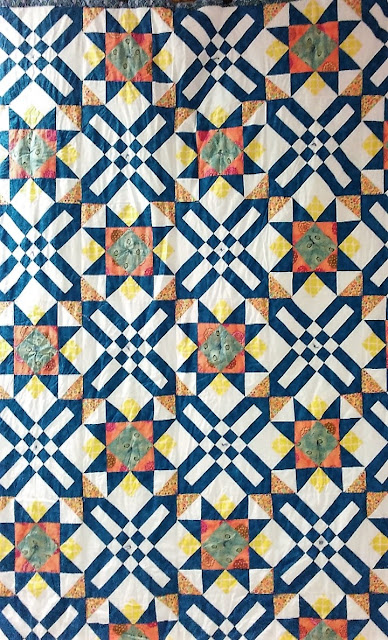 You can't see it in the photo but the fabric is Nebraska Cornhuskers (football) print. 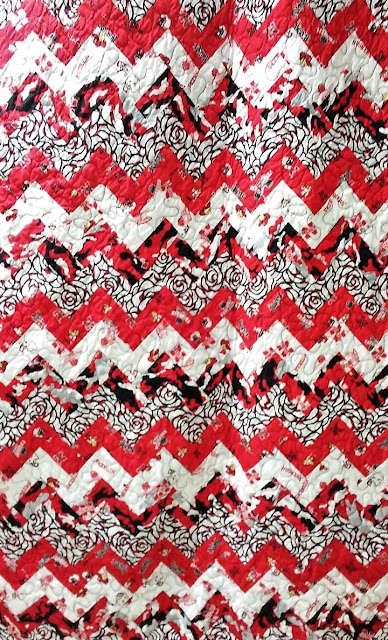 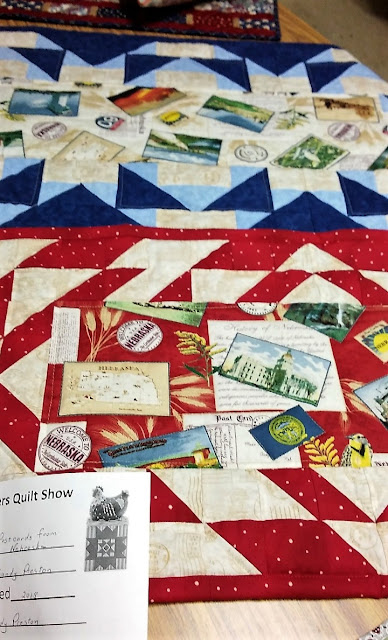 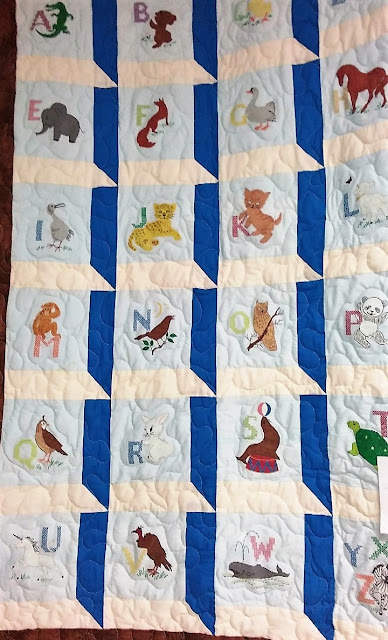 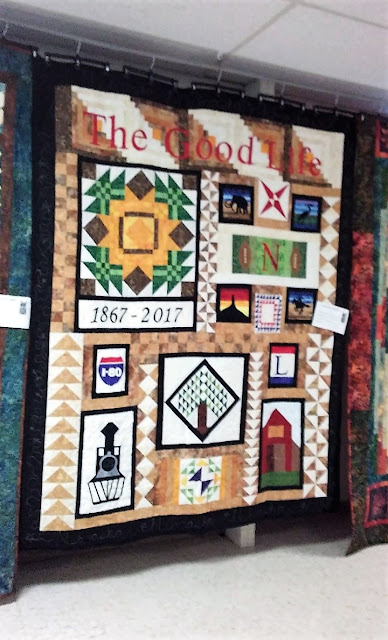 I know from experience how much time goes into quilting, and the hours represented in the finished work. It was a great show this year. 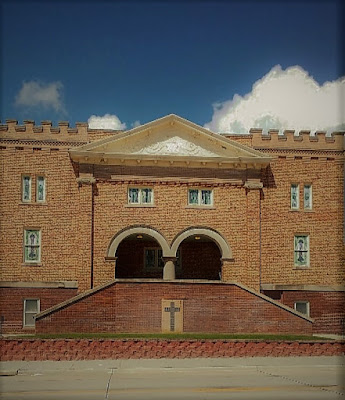 This is the Baptist church in downtown Wayne. I've never been inside, but it is so architecturally interesting to me. I love the arches, and the symmetrical stained glass windows. 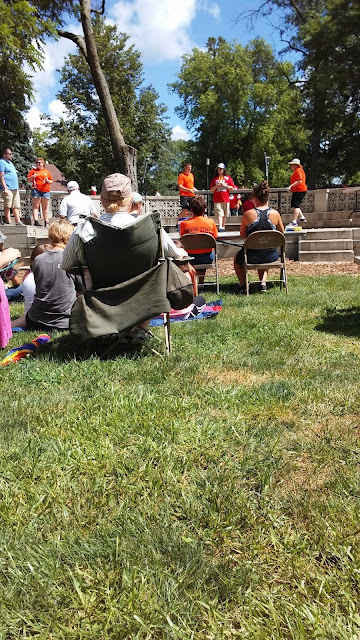 But really, we were there for the clucking. There was a "Best Chicken Legs" event, hard boiled egg eating contest (blerg), "Chicken Scratch contest" where small children had to scratch like chickens in a sand pit to find buried quarters, and other events like trying to catch eggs dropped from a helicopter! I mean, they make it worth the drive to Wayne as there's so much going on all weekend. There are a few thrift shops in town, and I came home with some bargain hats, earrings and brooches. I spent ten dollars-so really a great deal.

I wore my chicken apron made from a vintage feed sack by a wonderful woman in Virginia. 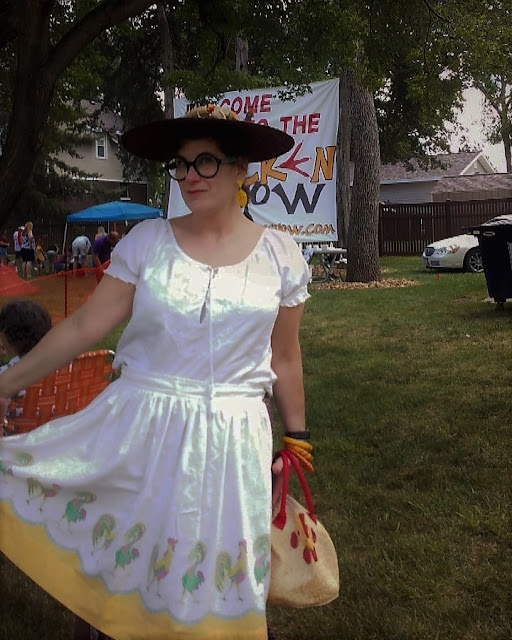 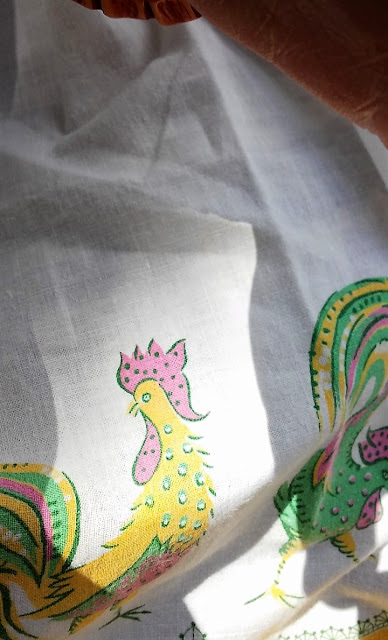 And I carried the chicken purse because where else would I ever use it?! 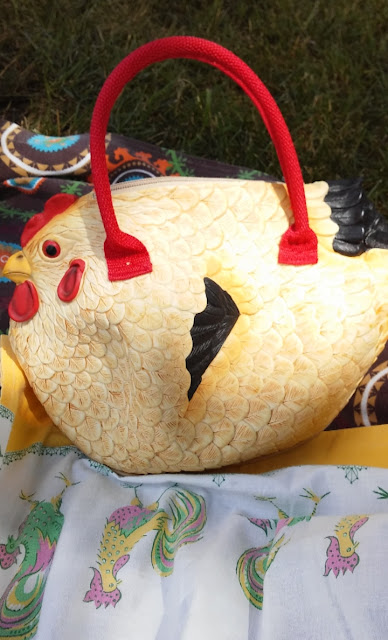 Did I mention the parade? Lovingly restored antique fire trucks alongside modern ones spraying the crowd to keep cool. 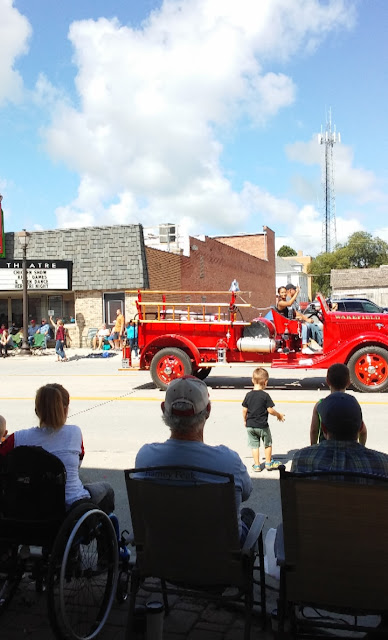 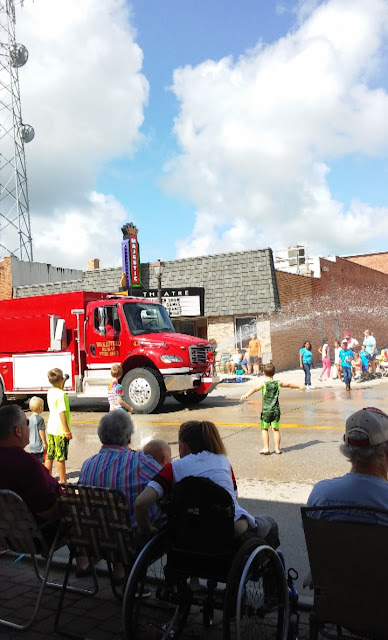 That's the cinema behind the truck. So many small towns have lost their theatres that it is always nice to see one still operating.
All in all, it was great fun, and Danny gets another year of bragging rights. I'll leave you with the coverage from our local news HERE where you can see a bit more of the chickens and people that act like them 😀Do click on the link, there are some adorable children doing their best chicken impressions and of course, Joel-the reigning adult Cluck off Champ 15 years in a row. The man knows chickens, and he's super-nice.
Next Up...the Nebraska State Fair at the end of August.

You are in the video LOL

Congrats Danny!!! Woo-hoo! 2 year champion...excellent and appropriate chicken purse. I bet a lot of people stopped you on the street to compliment it.

congratulations to danny!!!!
love your whole outfit! and the quilts are amazing - can´t imagine the patience.....
xxxx

OMG Danny is amazing!!! Well done to him. Love your frock hat and of course THAT BAG!!!

The intense colors of those quilt patterns is mesmerizing, Goody. However, there's no better word to describe your sweet chicken patterned frock than "pretty". Handkerchief linen? And a straw hat! Pretty, summery, and oh, so feminine! (Of course, there's also your alter-persona displayed in the quilt...)

That chicken purse defies comment. I'm sure it was coveted by many.

The quilts are gorgeous and so full of interesting things; I loved the Quilt Diva! Your chicken apron and bag were so fabulous. Did you get lots of comments?

Who would have thought you could have so much fun at a Chicken festival?

That chicken purse gives me life.

Congratulations, Danny! You'll give Joel some stiff competition next year.

@Vicky R
I know! I tried my darndest to stay out of it too! Still can't believe there was that much media covering a cluck off.

@Thrifty Parka
We got to the parade route a bit late and missed the Chickendales. Next year, we'll leave plenty of time. What am I saying? Next year Danny will probably want to join them ;)

@Ann
I bought 5 raffle tickets too!

@Beate
I told him no more clucking until next summer because I am so tired of hearing him practise! I have a quilt I've been working on for 3 years. I'm only about halfway finished.

@Sue
I was a little worried it might melt in the heat, but the rubber stayed solid. If I ever spot another I'll send it to you.

@Beth
Danny keeps reminding me that he's several inches taller than his mama. I keep reminding him that I diapered his behind ;)
I don't know what I'll do when this blouse finally gets threadbare-it is perfect in the unbearable heat and always looks good.

@Veronica
I'm so proud of that kid just for getting up there and doing it. I might not have been willing at his age, and I had theatre training. The outfit did get lots of positive comments. The apron is so nice I don't think I ever want to use it in the kitchen but there aren't that many places you can wear an apron in public.

@Amy
I think you have to go to Iowa for hog calling ;)
He does incredibly accurate bird calls too, but there isn't that much opportunity to use that skill. When he was about 7 we took him to one of those "Science Days at the museum" things where they had experts to answer kid's questions. One of my favourite memories was Danny and this respected ornithologist (major brush with fame) doing owl calls and saying, "No...it is more of a Whooooo than a woot" and discussing the minutae of bird calls. It was uber nerdy in the best way.

@Emily
He's reluctant to even compete against Joel because he wouldn't want to beat him. It would feel wrong. I've never heard of anyone deliberately throwing their cluck off entry, but he'd feel terrible if he won.

Looks like a clucking good time was had by all - well done to Danny for winning again.

Those quilts are amazing. So much skill has gone into them.

Well done to Danny! That's ace!
Love your chicken trim and basket and yes, they should have given you that quilt for being so fabulous. x