The Leaning Tower of My Spine 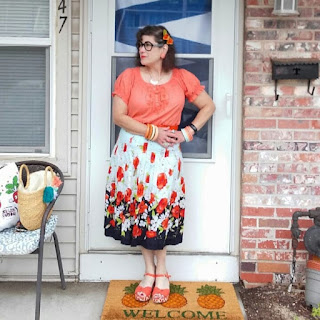 I've known my scoliosis was worsening with age, but it was only after noticing my skirts hanging more unevenly than usual that it hit home just how much worse it is. Taking your photograph regularly for a blog or social media provides an opportunity to view the changes over time. Anyway, I'm pointing it out not for sympathy, but because I don't want you thinking I can't dress myself properly! I may have a spine like Richard III but I can pull my skirts on correctly. Where they hang after that...well... 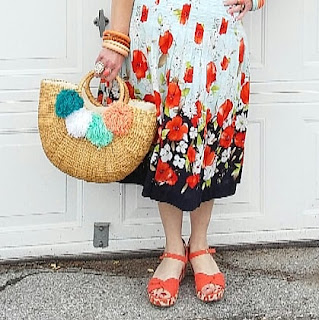 It seems more obvious with patterns-stripes being the worst. That said, I don't intend to dress differently, but I also don't want anyone straining their neck looking at photos. Honestly, I had more pain from the periodontal scaling I had done today than from my spine. Most days it is an annoyance. I'm not kidding about the scaling though. That shit hurts! 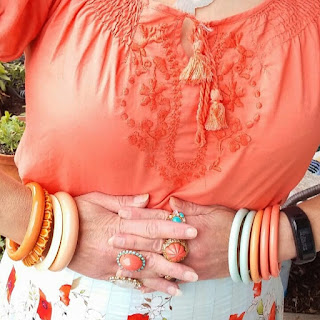 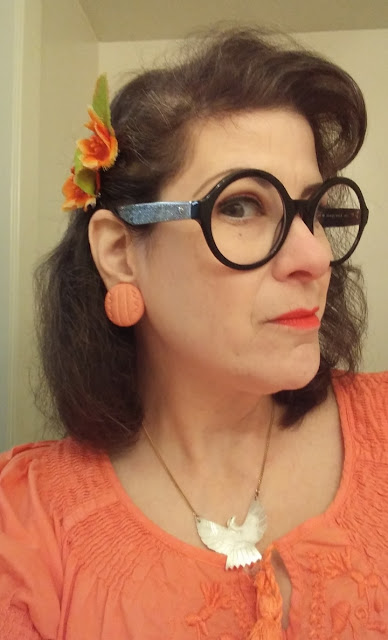 Outfit Particulars:
Talbott's skirt-Hand-Me-Ups
Shoes-K Mart
Blouse-Goodwill
Bag-World Market
Bangles-all over
Hair flower-Tiff and Tam
Mexican MOP necklace-Goodwill
Terracotta clip earrings-yard sale
Lippy-Revlon Snow Peach mixed with Jungle Peach. I should have worn Revlon Fire and Ice perfume with a combination like that, but didn't. I don't remember what I went with, but Fire and Ice isn't a summer fragrance, that's for sure. 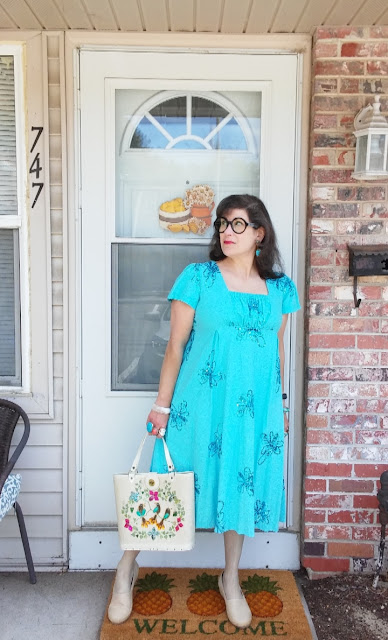 I'm still not convinced this isn't a child's dress. The length is odd, and originally the sleeves were puffed before I removed the elastic. I mean, it would be a for a large child, but still-there's something a bit youthful about it. I'm keeping it anyway because A) I love the colour and B) I love the colour. 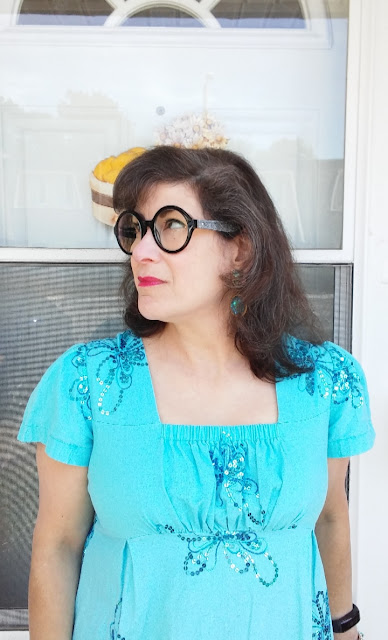 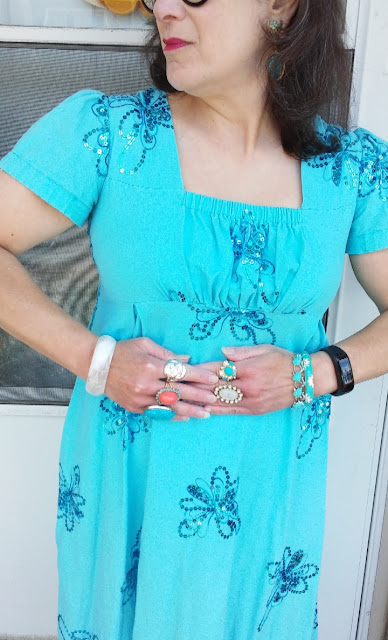 Outfit Particulars:
Dress-Thrift World
Canvas shoes-Goodwill
Quartz bangle-Goodwill
Blue enamel bangle-Target
Blue thermoset bracelet-Goodwill
Earrings-Mum's (I bought them for her in the early 80's)
Handbag-Goodwill
Lippy-came in a holiday set by Christain Siriano. The quality of those lipsticks is mind blowing. This one is matte, but not at all drying. Wish I'd bought ten sets.
Fragrance-En Avion (I don't dislike it, but after putting it on, I always wish I'd worn something else) 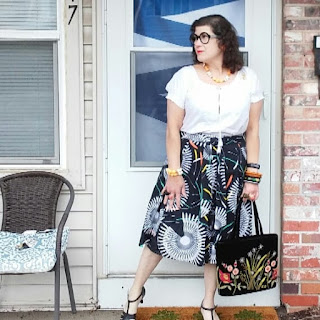 Creative leg pose to try and even-out the lop-sidedness. Not working, but as the kids say, "Eh, whatever." 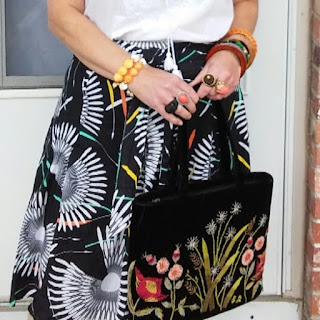 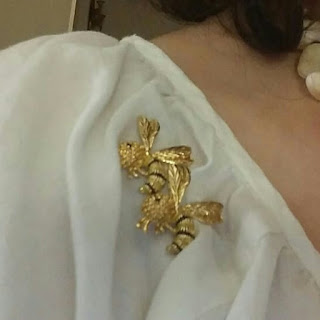 Outfit Particulars:
Blouse-K Mart
Skirt-Goodwill (fast becoming my favourite skirt of Summer 2018. I wear it more than anything else)
Bag-Goodwill
Brooches-Hand-Me-Ups
Shoes-Goodwill
Fragrance-Eau de Gaga .Seriously! For the money (not much at all) this is a perfect summer cologne. Doesn't last, but who cares? Lime, violets, leather and woody notes. Simple, clean, and addictive. Easily unisex, and inoffensive in most offices. 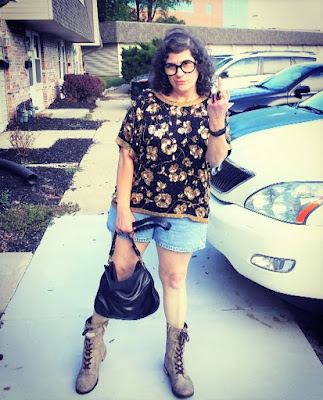 This might be my all time favourite photo of myself. If I die tomorrow, this is how I'd like to be remembered. 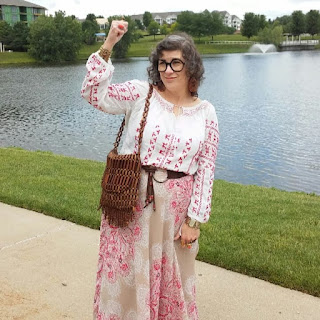 This one is a close second. "Over there, by the lake. Why don't you go jump in it?" 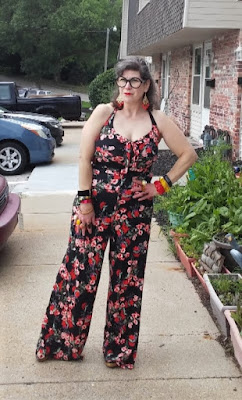 Sometimes I think I shouldn't wear some things but do it anyway. Why the hell not?! 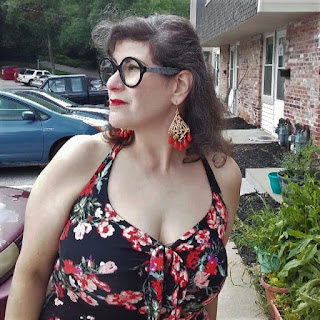 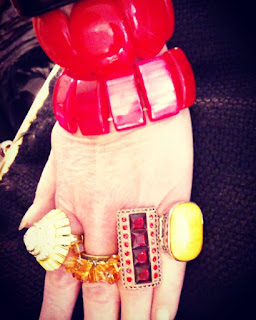 Outfit Particulars:
Jumpsuit-K Mart a few years ago
Shoes-Goodwill
Earrings-K Mart
Bracelet and rings-Gifts from an Instagram pal
Fragrance-I can't remember! It was probably Casbah which I was generously given samples of. I need to get that review done. Argh-not enough hours in the day. 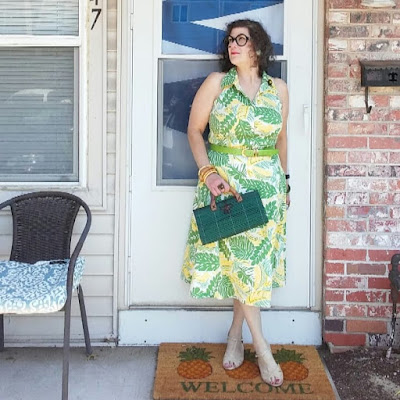 Finally, there was this outfit-a cool look during our extended heat wave that had high temperatures coupled with high humidity. I know people in Florida put up with this kind of weather every summer, but as a northerner, I thought the end of the world was at hand. Too hot for the pool even! I let my hair go natural most of those days as it would have been pointless trying to straighten out the curls and frizz. I re-discovered the abomination that is instant iced tea powder and kept cold pitchers of it on hand as a survival technique. Sure, iced tea sounds disgusting if not a bit vulgar but in 100 degree high humidity it was probably the only thing keeping me alive (and alert)! Well, and air conditioning 😀. It is still stupidly humid here but at least the high temperatures have broken. 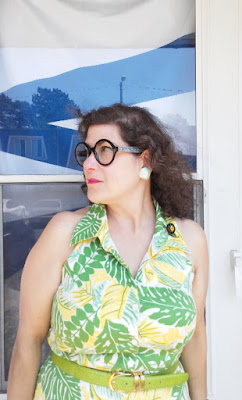 We're heading into the State Fair preparations now and tomorrow is another kolache test-run. As an interesting aside, Danny was scouted for a television baking show (not GBBO). It was still reality TV though, and I was relieved when he told me he wasn't interested. The chance at prize money is enticing but your reputation is worth more. People don't come away from those shows looking decent thanks to creative editing. It might make for good television, but it makes for awful society. If you need a cautionary tale about reality TV look no further than the White House. Anyway, he already had his fifteen minutes seconds of fame clucking like a chicken and he didn't need to stab anyone in the back to achieve it. I'm proud of that kid. I really am.

I'm glad your back isn't causing you to much pain - back pain is horrible.

That green leafy dress is wonderful, though you always look good. Every one a masterclass in accessorizing.

En Avion is one of my favourites, but I do always think there's something quite cold and minimalist about it. (Not in the number of notes, but in its personality - if it had a texture it would be polished chrome.)

Even though I grew up in Miami and I ought to be used to the heat, I still get that "end of the world" feeling whenever we have a heatwave. But at least there's the joy of summertime fashion to help beat the heat, or at least pass the time.

I love all your outfits today, especially the wide-legged jumpsuit. It's so nice that they're in style this year. They make everyone look so tall and elegant, but also commanding. And the loose fit is such a nice change from the skinny jeans trend, which most of us find too uncomfortable to wear on a regular basis, especially on a hot, sweltering day.

You and Danny would've been wonderful on TV (for all the right reasons), but I totally get why neither of you would want to participate. Privacy is too precious to give up, and it's hard to convey a true sense of authenticity when there are directors and scriptwriters and film editors watching and manipulating every interaction.

I'd compliment you on any of these summery costumes of the day, should we bump into one another at the pool -- but that cool blue is truly gorgeous!

My mother also suffered from scoliosis complicated by an extra two vertebrae in exactly the wrong place. She was an expert seamstress and used a floor stand hem marker and a kid with a piece of chalk to even things out. (In later life, she hired a dressmaker.) Her summer frocks looked woozy on the rod but hung straight on her!

Powdered ice tea mix is a sordid secret in many offices hereabouts. Starbucks will hold a second mortgage on the building if we bought the real stuff! (Recommend Lipton Lemon w/Sweetner because it eliminates not only the tea bags and boiling water, but also the lemon peels and little blue packets with suspicious white powder.)

ahhh - your outfits are so gorgeous! especially the coral blouse with matching jewels, the b&w skirt and the leafy dress at the end.....
here is still heatwave too - and a big drought (actually since last winter!) - lots of field and wood fires.
2 years ago i discovered in my photos the pisa tower effect too (spine difficulties since childhood) last summer i had many dates with an osteopath - it helped a lot. thankfully the insurance covered the costs.
stay cool! xxxx

I love your new favourite skirt and your leafy print dress.

My friend Charlotte has just been diagnosed with scoliosis at the age of 49! She was having bad back pain and had to have a scan which showed a slipped disc but at the same time the Physiotherapist was like oh yes and of course your scoliosis doesn't help assuming she knew all about it, she didn't, but she said it does explain things like why dresses looked odd like one shoulder was lower than the other and why skirts hung funny.

Danny is a refreshingly sensible young man. And I love the green dress.

A tip-off that Judy Blume’s DEENIE had scoliosis was that her skirts were longer on one side.

What totally wonderful outfits and you look AMAZING in your jumpsuit. I like the sound of K Mart - you buy some lovely things there. I can see why you keep wearing the black and white skirt; it's so cool.
Wonderful jewellery and bags too!

I've never noticed your scoliosis and how it affects the hang of your clothes but I am glad you dont have any pain with it...

@Mim
Thank you. I love that green dress even if it is a bit too long in the waist for me. Cold is an excellent description! You wouldn't think so on paper, but the notes do come up cold.

@Emily
I went to Miami in August once and thought I would die! Walking out of the air conditioned hotel at night and being struck by a wall of heat was hard to get used to. Not that it stopped my mother (and all the other women) from wearing furs out for the evening.
Danny's pretty content to live his life with the wee bit of fame he gets each year for clucking like a chicken ;)

@Beth
I have a hem marker-I should put Danny to work! It was only in the last eight months or so it got this bad. Looking through old photos I can see how gradual it was.

@Beate
I hope the heat and drought let up-both together is too much!

@Miss Magpie
That must have been quite a shock for your friend! I've known about mine since childhood (my parents elected to do nothing about it when I should have had a brace) but it has been worsening with age.

@Propagatrix
That kid has his head on straight. I wish I could take credit for it, but I'm a fucking mess!
I was juuuust a bit too old for Judy Blume's books, and I don't think I've ever read one (that I can remember). I know they were popular with girls a few grades under me. I'm reading some current (ish) YA fiction at the moment on the suggestion of a young friend and it is pretty good stuff! Maybe I'll get around to Judy Blume eventually.

@Veronica
K Mart is sadly closing stores one after another as people think of it as being too downclass. They still have a presence online though, for the time being.
I always avoided side photos from the right where the hump on my back is most pronounced. Now it is getting too hard to hide.

@Vix
The scaling ended up breaking a $$$crown and the tooth beneath it so I am now having that tooth pulled and replaced with an implant next week. There is no end to my dentistry woes. gah!
Iced tea is interesting, but best made from a mix as regular tea gets tannic. I know people brew iced tea but I never could develop a taste for it. At any rate, I wouldn't try it with PG Tips or the like.