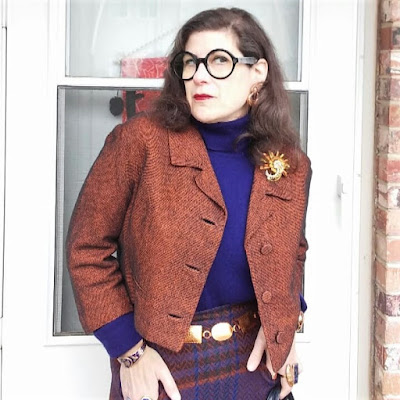 I've never gone out of my way to be cruel, but it can take reminding sometimes to be nice. I'm trying my best these days as it feels more urgent than ever. I bring it up because the day I bought this skirt was a very bad day. After pretty much having a life-altering bomb go off-the sort that leaves you with questions, no answers, and the un-moored feeling of not knowing who the hell you are (quite literally) I needed distraction, so I stopped at a thrift store. It was my husband's idea. Had I been alone I'd have headed for the nearest drinking establishment and would probably still be there. If nothing else, marriage has probably saved me from becoming the neighbourhood drunk.

People toss around the phrase, "I was in a daze" to mean a bit disoriented. I was far worse. Still, familiarity and behaviours you've done a million times over are reassuring in chaos (just as we practise fire drills to stay calm in real emergencies), so I browsed without really looking. Thrift shopping tends to be a solitary activity, unless you've brought someone with you. There's the unspoken etiquette that it is in fact, unspoken-like silent staring at your shoes in a lift. I picked up the skirt, and heard a cheerful voice asking me where I was from as she could tell I wasn't a local.

In hindsight, I think she was perceptive and knew I needed a motherly hand on my shoulder even as she was a good 30 years younger than myself. She had several children with her looking through toys, clothes and the like. Without asking me what was going on, she managed to get me to answer a few questions and engage. We never did discuss my still very fresh traumatic shock, but instead chatted about where we lived, what our husbands did for work, children, good places to thrift, etc. Maybe 10 minutes passed before her kids had enough, and she needed to pay for her purchases. We met up again outside the shop, chatted a bit longer, and she left me with such a kind, warm, positive feeling about humanity that I was (temporarily) able to pull myself together. I'm still working on it for the long term, but I'm getting there.

It was a terrible day, but I didn't think about that when I put on the skirt for a first wear. I thought of the lovely woman whose name I'll never know that gave me a much appreciated rescue. If anything, the skirt is a reminder that we haven't completely given in to our worst tendencies and decent human beings are out there even if they're a bit scarce. I'm also reminded that resistance sometimes comes in subtle forms. Behaving kindly in a world that rewards cruelty, revels in cruelty,  takes as much determination as marching in the streets. I fear it is all we have left. Undermining the pervasive awfulness is a tall order, but we must start somewhere. I don't have a crystal ball into the future, and I won't pretend to have an optimistic personality, but I do have the perspective of having been alive more than half a century and having seen some very positive progress even when it seems darkest. As the stockbrokers say, "Past performance isn't a guarantee" but still.

Let's raise our glasses in a toast to all the loving husbands and kind, angelic strangers out there who can keep us grounded and sane on a very bad day.

Hope you are feeling better after whatever it was that you were going through.

Life altering trauma & drama seems to be the norm rather than the exception these days. I think I'll just continue to sit this one out beyond the arse end of nowhere in the Himalayas. Shopping used to be an outlet for my feelings of WTAF? Now I just close the compound gates. Anyhoo- That is a gorgeous ensemble of rust & ultraviolet (is it?) Cheers to you & the lovely young mom at the thrift store!
Such is the human condition,
Bibi

Very sorry to hear that you had a terrible days but so glad someone showed you some much needed kindness at that time (as well as an understanding husband). When I was in a job that got steadily worse sometimes my only salvation was the op shop nearby. And you do look wonderful in that outfit. Hope things are steadily improving.

what a coincidence!
last night i reached the peak of my "i don´t want spend time & energy with/for people (aka "friends") who favor hate over love and don´t give a fuck about my real me - i´m even argue they make ugly jokes behind my back... - ---
so your post hit home.
and yes - i have experienced it too - the most comfort often comes from totally strangers - like as were an angel send or a good spirit has materialized to help us.
oh - and husbands - mine has talked with me the half night until i was calmed enough to go to sleep :-)

i´m very sorry that you got hit with such a very bad day - sending you all my best wishes!
xxxx

Thank you for the reminder that there are still kind, perceptive people out there in this world which seems to be filled with hate and spite. We are all in need of that hand on our shoulder from time to time. I'm glad you met that lovely woman when you needed it most, and that she put you on the way of recovery from your traumatic experience. Your husband is a wise man to have directed you to the thrift store, and between him and that gem of a woman, you ended up with a fabulous skirt to boot! Virtual hugs from across the ocean xxx

You've sadly, accurately described my awareness of a delight in cruelty which now infects American society. (I fear it's my awareness of it that is new, not its presence.} We friends know you have a lifetime's experience for armor, Goody, yet it comfort us to know you've a supportive husband and can recognize the kind intentions of a stranger. We're not alone in this battle.

Coincidentally, I've just viewed a vlog posted by Justin Scarred, a young musician-turned-YouTube creator, who was coping with financial worries, his partner's illness, and an engine light that just came on by shopping for table lamps in an antique mall. His crowd of commenters could be our kids and this is new to them.

Your new skirt is a handsome reminder of the power of such small acts of resistance.

I've often found thrift stores to be comforting places in times of stress. I can't think of a time when someone has been rude to me in the thrift store, but I can think of several times when strangers lifted my mood by giving me a compliment. Thrift stores tend to be places that are free of mean judgments and havens for people hoping to mend broken objects (and people) and rescue the unwanted. I hope that as you deal with what is happening that you'll have the support you need and many good thrift store trips.

There's recently been a radio series on 'Loneliness' here on BBC Radio 4. I have listened to a couple of episodes and plan to catch up with all episodes in sequence. Today, I heard an excerpt from it by a young person who had had a tough and lonely time at school. Her advice, now she is an adult, is to be kind and perform little acts of kindness to other people as often as you can. I try to do this myself on a daily basis if I can and the lady who gave you some comfort in the charity shop was doing exactly that. I do hope you are okay, Goody. You look fably autumnal in that lovely ensemble.
xxx

Wow, that's what I was looking for, what a stuff! existing here
at this weblog, thanks admin of this website.

That's a beautiful outfit - so sad to hear you had such a dreadful day, though, and that it's something you're still coping with. Sending big love and hugs your way.

I try to be kind whenever I can. It does make a difference, kindness knocks on as much as cruelty.

Dear friend, I’m so sorry you’re experiencing icky things. Taking comfort in the small things — thrifting, kind strangers, lemon bread with violets — is indeed helpful. I hope knowing that you are loved by your online friends is helpful too.

If you need me to beat up anybody, you have but to ask.

Oh Jen I do hope you are feeling happier. I struggle with people and the world in general at times so I try to 'pay it forward' as often as possible and have also taught my sons to do the same. I am currently reading 'An open heart, practicing compassion in everyday life' by The Dalai Lama. It is very soothing to read and I do feel my heart is open. So I send you a huge HUG of love, hope you feel its warmth!

Sorry to read this one, and I'm so glad that lovely young mum was there to have that restorative exchange with you. I've had a few encounters with guardian strangers before now. Sending virtual hugs. Jessie