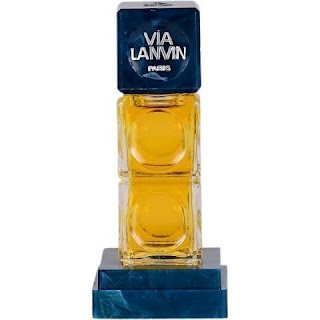 My younger self would have been all over VIA had I known it existed. Launched in 1971 it should have been on my radar, but for whatever reason was not. I've never been much of a Lanvin fan, so that might have something to do with it. Still, the bottle is so fantastic looking, I'd like to think I'd have been drawn to it. No time like the present for catching up!

I have a love/hate relationship with narcissus. It can be an allergy inducing nightmare, or it can be the best thing ever. Or Noir Morabito can induce an asthma attack, where Samsara, and Norell don't bother me at all. I was cautious with VIA as it is a narcissus powerhouse according to reviews. I did the "One tiny drop on each wrist, and rub" and was completely blown away, not by the narcissus but the oakmoss. Holy hell, this IS a 70s perfume!

I haven't smoked in many, many years, but when I did, I smoked those terrible menthol cigarettes like Benson and Hedges (barfs and heaves as we called them) or later when I could afford them, Dunhills. Horrible, horrible, ghastly things. In later years I developed a dislike for menthol and finished out my smoking days on Chesterfield's and Marlboros which were probably worse than any menthol cigarette could possibly be. Anyway, I rarely crave cigarettes, and probably had the world's easiest time quitting (I just stopped smoking) which I know is extremely fortunate and not meant to minimise the difficulty so many people face giving it up. My point is I hadn't thought much about cigarettes until I got a whiff of VIA, not because it smells like tobacco or smoke-it doesn't, but because it reminds me of the era when I started smoking. Cigarettes were .55 cents a packet when I started-so cheap even a kid could afford them. I'll leave you to judge what sort of adults let their underage charge smoke at home because it was a good tool for weight loss, but I think it is fair to say it was more common than we'd like to admit. I wish I could say that was their worst parenting decision but I think we all know that wouldn't be true.

VIA reminds me of smoking in the 70s. It reminds me of the gigantic decorative ashtrays always filled to the edges (because who could be bothered to get up and go dump it down the toilet?) stinking up the curtains, carpet and upholstery of every room in the house. (Almost) everyone's home smelled like that. Everyone's car smelled like that. People used to walk the aisles of the supermarket smoking. We all walked around in a cloud of smoke, whether we smoked or not. It must have been terrible for non smokers-it is hard to imagine today. Perhaps that's partly why VIA seems to be missing something. Would a tobacco note help? Only one way to find out-enter, Maurer and Wirtz Tabac.

I do these things. I'm like the old person that blurts out whatever their brain happens to be thinking without any sort of filter. I swear, I'm NOT impulsive, but perfume is like painting-throw in a little crimson, some cobalt, some vermilion-before you know it you have a carcinogenic cocktail of raw pigments a muddled mess of colour that you slap on the canvas anyway. I am the canvas to my perfume collection's mixing palette.

Layering Tabac and VIA sounded  like a good idea, and I'm willing to try just about anything with respect to perfume. Trust me when I tell you, DO NOT do this. Just don't. You'll regret it, and your family will hate you, particularly if you're all trapped in the car for a ride to Iowa. Learn from my mistakes kids. I've got one word to describe the result of my little experiment: Bad. Okay, two words:Very Bad.

Sigh, I think VIA would be a tricky perfume to wear in close quarters today. Definitely not an inoffensive office scent, though the only offence it could cause is not smelling like candy floss or fabric softener. These days, that's enough though honestly, VIA wouldn't have been a quiet fragrance in the 70s. With that much narcissus, oakmoss, and vetiver it is going to be noticed! Toss on a wallop of aldehydes and it will be enough to send some people to a window gasping for air. Surprisingly, there isn't any civet in VIA which seems strange to me-I mean hell, you have the rest of the stinky party, why not throw in some feral cat?!

The market auidience for VIA isn't absolutely clear to me. This isn't a young person's fragrance (certainly not in the 70's) but it isn't mature either. It doesn't feel revolutionary or different from many of the other fragrances of the era. My bottle is old, and it is possible the lemon and carnation notes were more refined and have been lost over time, or that there's subtlety in the jasmine I can't smell-but I kinda think this was someone at Lanvin thinking they needed to grab the 30-something housewives that wouldn't wear My Sin or Arpege because their mother's did. I don't get, youthful office worker from VIA-if anything, I think I get "Aged out of the Junior League, married a banker and bought a house in the suburbs."  Or possibly, "Estee Lauder, for women that think Estee Lauder is too common."

That said, I have been enjoying VIA (alone, without any layering) and wouldn't hesitate to buy another bottle if it came along. The oakmoss/vetiver combination is beautifully done-you get the sense they went for expensive vetiver. Could I live without it? Sure, and that's likely the general reaction that doomed it. There were so many extraordinary perfumes coming to market in that time, I suspect VIA just didn't have the marketing to make it stick. The packaging with the modern looking type font and silver box should have appealed to the hedonism of the 70s, or at least people that could afford to snort coke. I'd be interested to know what someone young thinks of VIA, without all the associations I have from living through the era. But whatever you do-keep it away from M&W Tabac.

love your perfume review posts!!
you open up a whole new world for me with your gorgeous - and fun - writing!
the scent sounds like something i would like, have a love for heavy perfumes - despite not wearing them anymore because they seem misplaced here in the woods - they need a city surrounding - a tabac smoke filled bar perhaps......
xxxx

As I'm a complete ignoramus when it comes to perfume, I'm always in awe of your ability to describe a scent at such length, and I love the stories you weave into your reviews. If there's one thing I know, it's the power perfume, or indeed any smell, really, has for triggering memories, be it good or bad ones. There are certain perfumes that trigger such poignant memories that I wouldn't ever be able to wear them anymore. I used to be a smoker too, and I too simply quit, the day we moved into Dove Cottage! I was so busy unpacking that I didn't have the time to think of cigarettes ... xxx

This sounds like Lanvin's stab at the 70's green trend in fragrance.
"Aged out of the Junior League, married a banker and bought a house in the suburbs."
Swap banker for dry cleaner & that describes my older sister.
Every time I go to a "smoking state" (last one was Oklahoma) I am reminded of when everyone smoked everywhere in the US & reeked of it. I recall as a child being on a flight from Los Angeles to Shreveport and darned near dying from smoke- sore throat & lungs, burning eyes. Air Marshalls openly carrying guns were on that flight too- must have been when all those hijackings were taking place.

@Ann
That's so true about needing time to smoke! These days you have to stop, go outside, etc.

@Bibi
I remember flying in those days too-I was always a little sorry we weren't hijacked to Cuba (it was warmere than Chicago)!

That's weird, I definitely wrote a long-ish comment -with actual content - on this post, the day you put it up. Disappeared! Ah well. I can't remember all of it, but it did include the fact that I really enjoy your writing about perfume, even though I k ow nothing about it myself. xx

That sounds intriguing, but not like one I'd hunt down. This might sound weird, but the shape of the bottle reminds me of a stack of old camera flash cubes, though the name doesn't suggest that. I'm off to pinterest to see if there's any advertising to look at...

@Radostin
Thank you. Yeah, Blogger is odd these days-I don't think it is getting the attention from Google it requires. My spam filter has all but stopped working.

@Mim
Yes, I can see the flash cubes (young people scratching their heads going, "flash cubes?". It reminds me a bit of those glass bricks you see in factory windows.