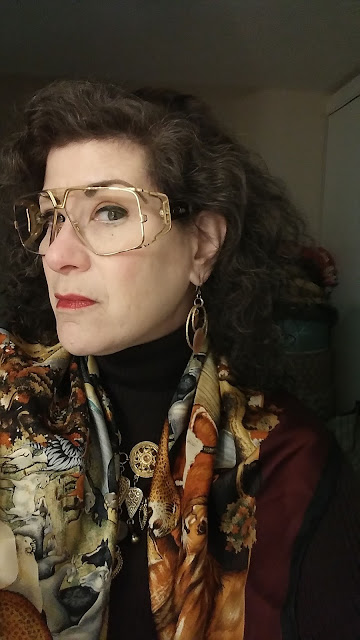 It was always a battle, this hair of mine. Now, in my 50s, faced with it falling out from a combination of medication and menopause, it was time to do something. Initially, that "Something" was going to be a very shirt pixie cut, or perhaps a wig. I knew it couldn't take much more heat styling, and smoothing it with a flat iron wasn't working any longer anyway.  One night, scrolling through Tumblr someone linked to Naturally Curly, and I clicked the link. I read one article after the next, effectively un-learning more than a half century's worth of bad hair advice. 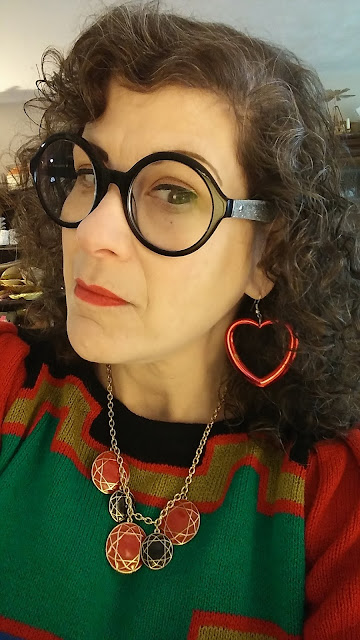 To be fair, my mother had no idea how to deal with hair like mine, so she straightened it with giant rollers, hairdryers, and whatever lotion and potion was being sold to do the job. My hair would break a lot, which led to me wearing shorter hairstyles. It wasn't a big deal when I was young-my hair was pretty resilient at that point. 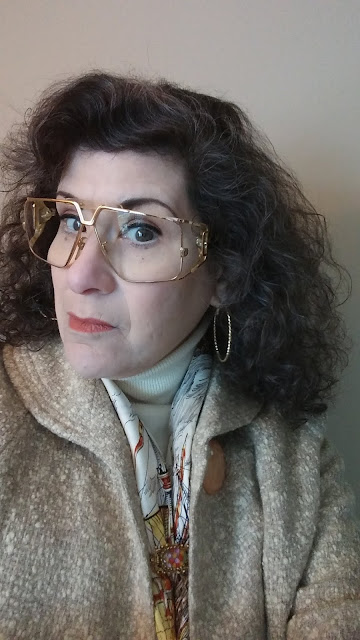 There's a lot of subtle (and not so subtle) ideas about class tied up in hair like mine, and I have an early memory of my mother telling me that people with curly hair looked like they had lice festering in it. Coming from a woman with stick-straight blonde hair you can interpret that as you like. 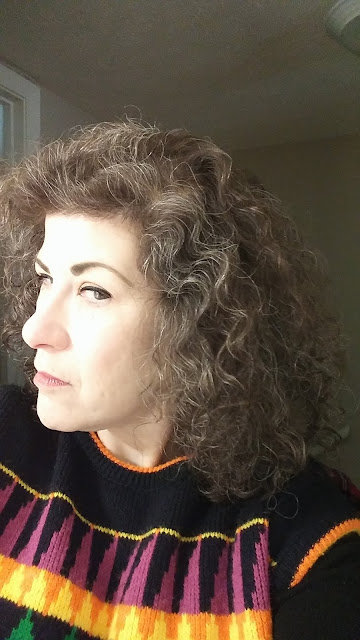 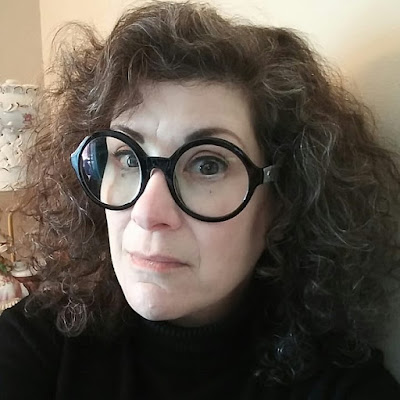 I also learned that spray hair gel is a miracle in a bottle. 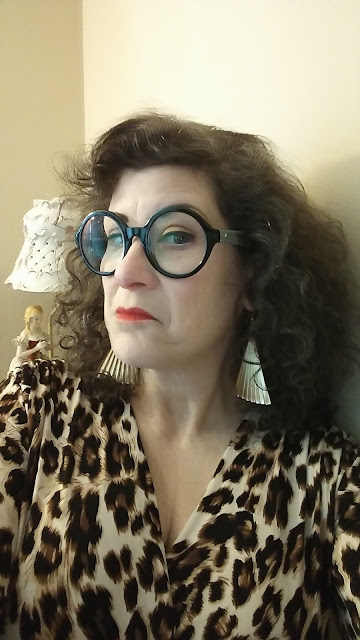 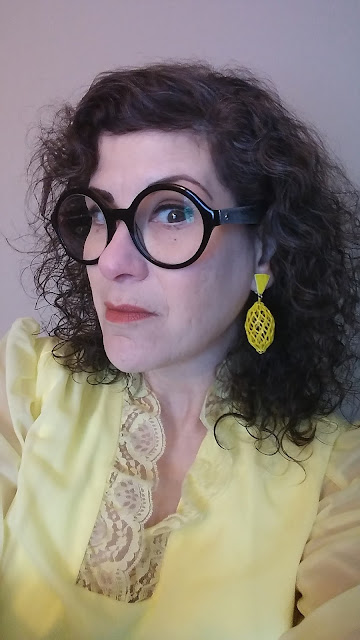 Just beware there's a learning curve with the gel 😀. You CAN overdo it! 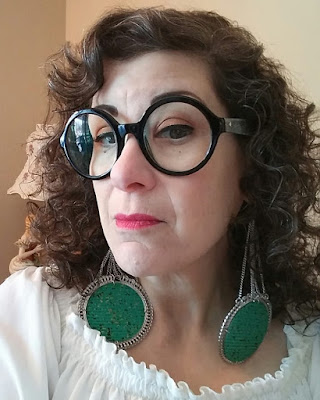 Your natural hair is lovely. I envy its personality; my own hair is stick-straight and baby-fine and I permed it for years. Like you, I eventually realized it was better to let my hair do what it wants, though for me that means “stay around chin length and fall forward.” Hence the Louise Brooks bob.

The loose and curly look is terrific with the glasses! Curls = volume, Goody.

But don't knock wigs. College chum of mine, my very first African-American girlfriend, gave us all the horrors when we dorm mates read what she was putting on her hair to get that straight flip: "Lye! You're putting lye on your scalp!" Fast forward 50 years, she wears her gray hair cut short and natural -- under a collection of wigs. "They spend the time at the salon, I got better things to do..."

OOO I love your curls!
I have the same curl in my hair! My mom had stick straight blonde hair too, I recall endless torture involving lots of Dippity-Doo and painful nights sleep in giant rollers. Not to mention the tearful tantrums when she'd brush it out and I'd end up looking like a troll doll. Braids were the only compromise we could reach as she was clueless on how to deal with my hair.
I gave up shampoo like 10 yrs ago and do the conditioner-only 'co-wash' thing- best thing ever to stop the breakage I suffered for years. I'd recommend the As I Am Coconut Cowash Cleansing Conditioner if you want to try it- very inexpensive (like $7 for 16oz), can be found at Walmart in the ethnic hair section, and chock full of hair healthy ingredients.

Love your curly look, the volume and coolness! and lots of possibilities!. And your earrings look even more fabulous with your curly hair!.
I don't understand those 'hair prejudices' against curly hair, grey hair or whatever, particularly against any natural looking hair which usually looks fab.
On having a 'supportive' mom (/irony). I remember having my perm done in the 80's (mwhaha). And I was encouraged by my mom to get a tan, which I never did (thank goodness!).
Lovely to see you looking fab!
besos

Your hair is beautiful! I grew up with people not knowing how to deal with mine, too, so it took years for me to learn how to cut it and just let it be what it wants. When it's really cold out, like now, I just rub a bit of regular conditioner on the ends and let it dry. There are products just for curly hair, but they cost a lot and I'd rather spend my money on food or music or something.
Stay warm, my dear!

Your curls are wonderful! Keep them you look lovely. You can still put your hair up and back and have different looks. Loving your autumnal colours in the first photo and all your fabulous jewellery.

My hair used to be very curly as small child (and white blond!) and always retained a wave but if I let it grow long, the weight of the hair pulls the wave out.

As you know my children are mixed heritage; my daughter, who has the most beautiful long curly hair, swears by Paul Mitchell products. There's one whose title escapes me at the moment that she uses to define her curls. It's pretty expensive; about 25.00 for a large bottle. I'm afraid I was useless at doing my daughter's hair as a child; never got the habit of plaiting it, but I was the only person who could brush it out for her without her having a mega meltdown! Oh happy days...

Hi! Don't remember ever posting here before but I read your blog all the time. I had really curly hair as a child and I'm older than you which makes my mother older than yours would be. In my mother's youth, curly hair was the thing to have. She had straight, thin hair and always got a perm or set her hair every night in curlers. So she loved my hair. But I didn't! So I did what you did - straighting iron, blow drying, whatever! Once I even used some hair straightener which you applied and left on for awhile and when I rinsed it out, half of my hair broke off 2 inches from the roots! My hair has now gotten quite straight for some reason and I do blow dry it but don't have to go crazy any more trying to straighten it. I love the way your hair looks natural. You have nice, smooth curls and it really looks great. If I had hair like that, I'd never blow dry it! Cheers from Arlene from NJ

You've always had Katharine Hepburn's wit, strength, and style. Who knew that you also had her hair?

In the first photo, where you have your hair parted at your left temple and teased for volume above the forehead, you really look just like her:

With glamorous hair like yours, you are the envy of every woman. Wear it with pride, my friend. : )

@Propagatrix
I love your hair!

@Ann
Thank you. I really like your hair-it always looks stylish and so great with hats.

@Beth
I did wigs for years when I was young because I couldn't manage school, work, and hair-so hair fell by the wayside.

@Bibi
I will look for that. Right now I am using VO5 conditioner I bought at Big Lots for a dollar.

@Senora Allnut
Oh goodness, mothers get some ideas! To me, hair is just hair, so I refuse to tell Danny what to do with his. It isn't a battle worth fighting.

@Bobbi
You have great hair! I'm finding inexpensive minimalism is the way to go as well.

@Veronica
From the photos on your blog, your daughter has beautiful hair-if that's from Paul Mitchell, it is worth every penny (but I suspect she was just blessed with great hair).

@Arlene
Thank you. We go through so much trying to make our hair what it isn't !

@Emily
Thank you. You could do a lot worse than Katharine Hepburn's hair. When I was young people told me I looked like Stephanie Powers, but I never could see that either.

hi goody - my comment got lost!
this is esp. bad as i´m very happy that you finally found your beautiful natural curls!!
you look fabulous with the new hairdo!

the less is more is something i had to learn too....

Love it!!! It really suits you. xx

I love your natural curls! Very Helena Bonham Carter. (I loooove her!) Wrapping a silk headscarf round the head for sleeping is said to help minimise breakages; I dunno if that would work for you.

@Vix
You have incredible hair.

@Mim
Thank you. I pull it up on top of my head in a scunchie like a pineapple and sleep on a satin pillowcase. A scarf or sleeping cap would never work in my menopausal night sweats state.