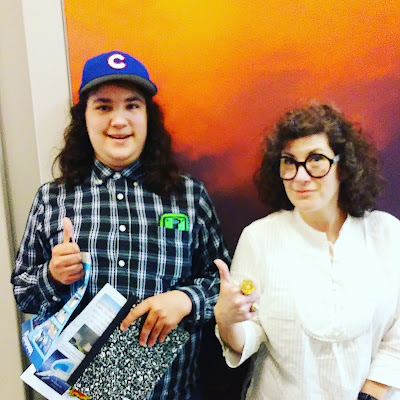 We finally did it! Storm Spotter training only took a couple of hours, and was time well spent. After taking a direct hit from a tornado (4 June, 2008-photos are in the archive if you're interested) Danny became interested in weather. Now that he's finally old enough, he was able to take the course. I joined him because it lit a fire under my ass to get my radio license. So we're ready for severe weather season, but I really hope I don't need to call anything in. After the floods, it would be nice for Nebraska to get a break. 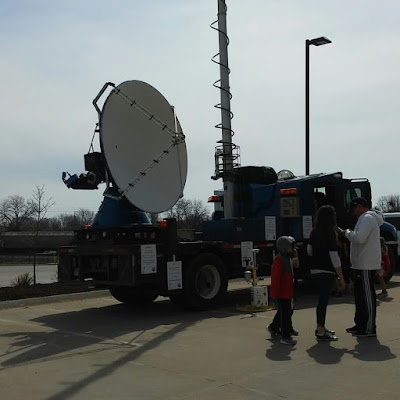 The mobile Doppler was at the weather symposium. Danny had the opportunity to climb inside and see the operations.

Anyway, if you live in the US and are interested, take a look at the NWS website and see when there's a class near you. 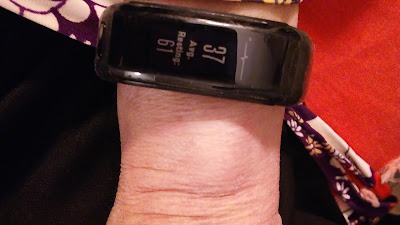 So this crap is still happening. My heart rate is pretty low to begin with, but after a long run (more than two hours) it plummets about ten minutes after finishing. I don't feel the drop, but I can feel when it starts coming back up-and that's when I can look at my data and see what happened. Occasionally it happens when I haven't been running, but that's less common. If I lived in a country where I could afford a doctor, I might have this checked out, but here even with insurance the co-pays and deductibles the various tests would cost more than a used car. I suppose after a few years of this I'm less concerned, but I really wish I knew why the hell this happens. I don't suggest Googling it-online medical stuff leans a bit hysterical. Anyway, for a fat, old lady I should be pleased I can run as long and far as I can. My lungs and legs are really good😀. 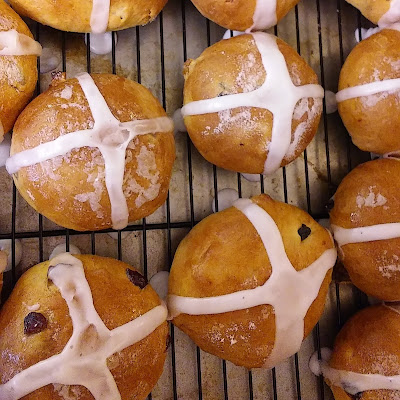 This year, Pesach and Easter overlap, which means no Easter baking as we can't have bread. I'm getting around this by baking and freezing for after the holiday, but the boys wanted some Hot Cross buns now. I used my same recipe (in the archives) but tried replacing one cup of plain flour for bread flour. It helped the buns hold a better shape but didn't sacrifice lightness. I also didn't have any currants so I used raisins, sultanas, and some dried cranberries which were met with great approval. I've been using a small bit of strong flour in laminated pastry for years, but this was a first in the buns. 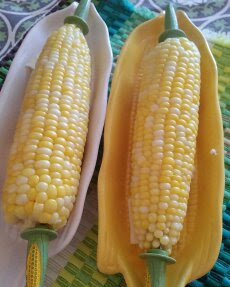 We are still several months out from Nebraska corn, but Florida's crop is here. At ten ears for a dollar, it would have been foolish to pass up. Danny had these ears for a lunch and I roasted the rest with cumin, coriander and chili powder to use in various meals for the rest of the week. I personally stay away from sweetcorn as it upsets my stomach, but the boys adore it, and it certainly kept them well fed at bargain prices. And yes, I have corn shaped dishes to serve corn in because...I am a Midwesterner! I also have a sour cream dish shaped like a baked potato! 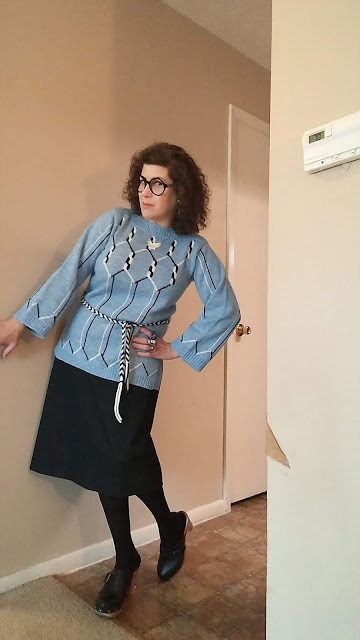 I've been stuck in the seasonal no-man's land between winter and spring. One day it is shorts, the next a sweater and parka. This outfit is a nice compromise. The skirt is polyester that's dyed to look like denim. At the time that sort of thing was popular I swore I'd never wear such an abomination. Then, forty years passed and well....never say never, I guess! The acrylic 70s sweater still had the original belt-a very lucky find. I wore it with clogs for true mid-70s accuracy. I look like my mother, except she'd have worn it with polyester flares. I like the lines of this-I'm thinking a cotton tunic in a similar shape would make a nice summer look with a linen skirt.

One of my favourite Mexican necklaces getting a wear. 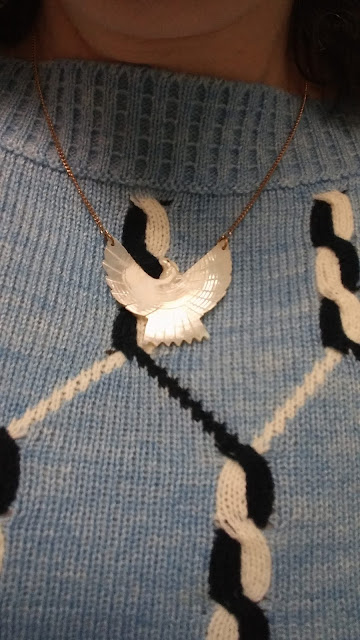 Time to break out the macrame bags! 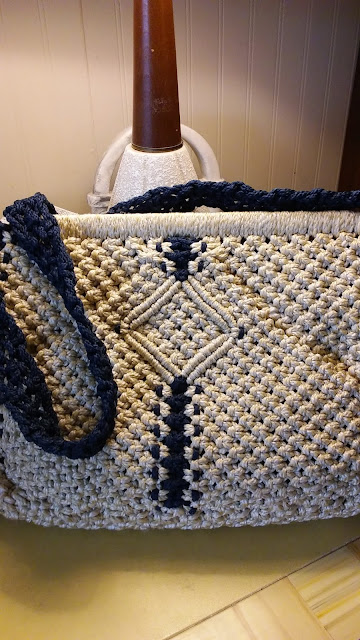 Hoop earrings for the 70s win. (No, not Whip Inflation Now. That's a different WIN. And it lost) 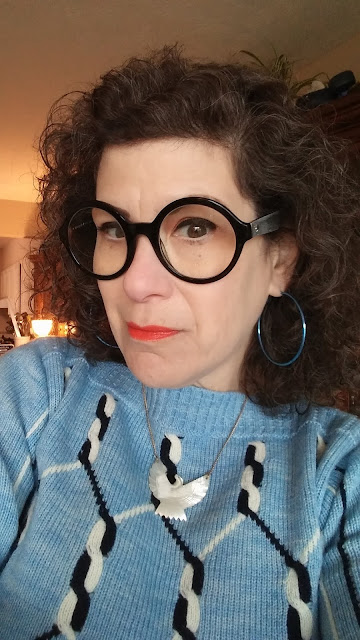 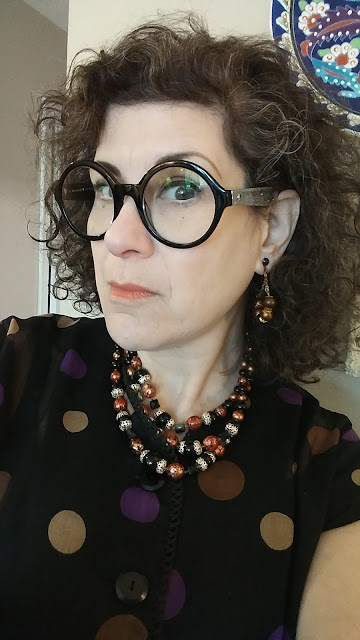 This dress has been lingering in my wardrobe for years. I've only worn it once in all these years, and I have no idea why, as it is a wonderful piece of vintage. 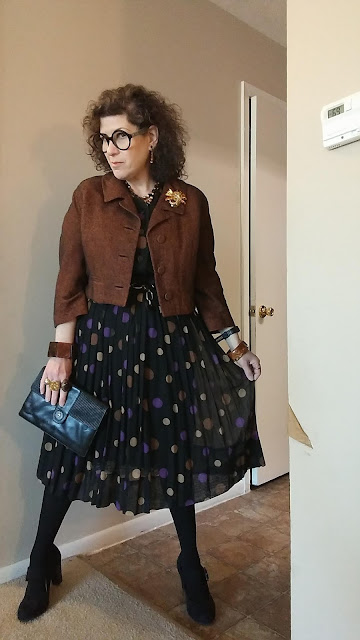 As you can see, it is quite sheer, but nothing a lacy black, full slip couldn't solve. The maker is Wildman, which is such a fab name for a women's dressmaker. Perhaps that's what happens when men catch sight of women in such sheer dresses? For the record, I could walk around stark naked and Mr. ETB wouldn't notice. He did mention that he liked the dress though! 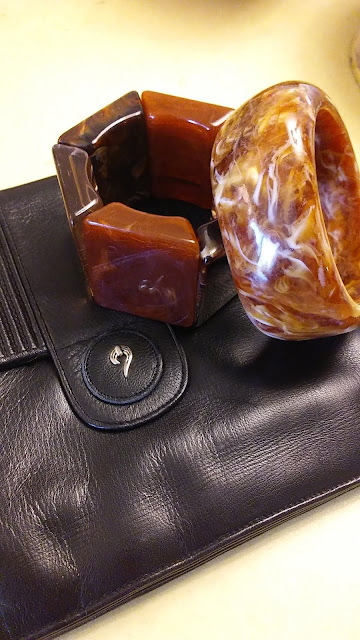 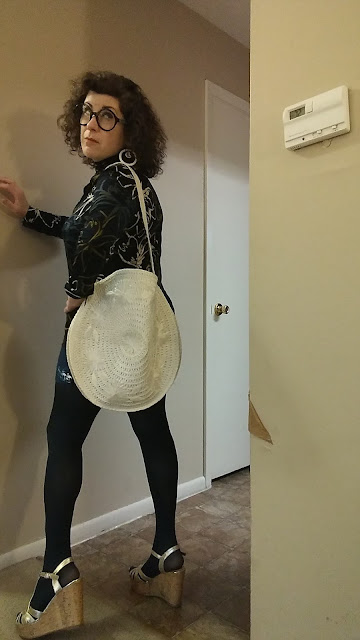 A bag as big as my ass! Bet you didn't think it was possible. The shoes are kind of cool... 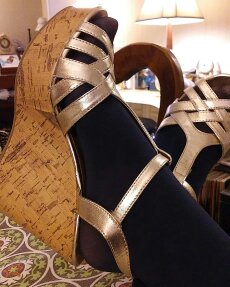 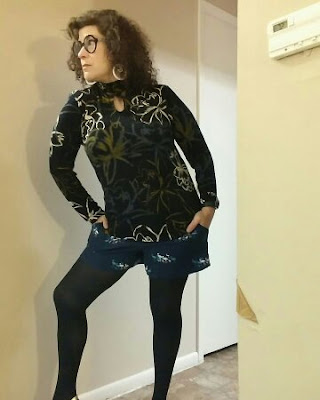 The shorts have crane/stork-ish type birds on them. Yes, I am the mother of a birder, and I describe birds as "storkish." He'd be horrified if he heard me. 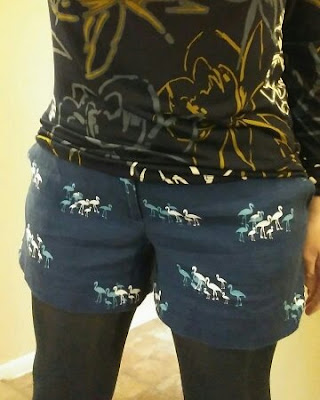 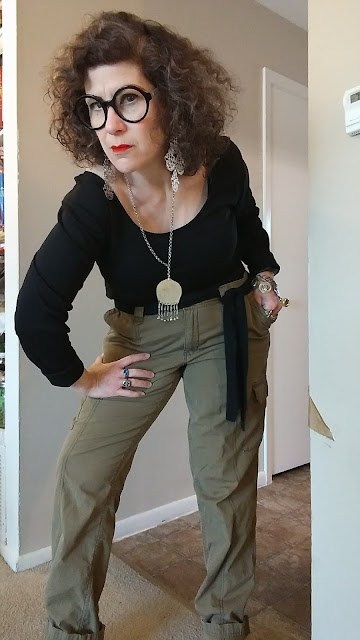 That's about it for now. Tomorrow I'm off to buy patio furniture and hope that we get decent weather to sit outside and enjoy it. But if the weather gets scary, well...I know what to do!

trained storm spotters! well done!
and because you mentioned the USA - since a few years a slightly warmed up atlantic has started to built up the hurricans much more up north - which makes them turning to europe instead to the caribbean see. thats the reason for our - never seen before - heavy winter storms since 2015.....(german TV can be very educational ;-D) and it will get worst of cause.

in the meanwhile i distract myself with your fab outfits! i´m over the moon about dotted dress with short jacket and amber-like jewelry....the blue sweater is very chic on you in that combo....and the last look is so much 2000.....genius!
your baking looks & sounds very yummy <3
xxxxx

Bravo on the storm spotter training!
A girlfriend on mine (of our age too) who runs described a similar cardiac issue, she paid the price of a car getting it seen too & the result was - nothing? So there's that.
What a true 70s look that is with the acrylic sweater, macrame bag, and faux denim skirt! Love the 50s Wildman dress, those cork metallics wedgies are AMAZEBALLS!
On my resemblance to Eva Gabor & Barbara Eden - Why thank you Dah-link, I have noticed that as my brows have thinned & now I MUST pencil them in I'm rocking an even more 50s-60s glam look. If I slap on a red lippy & strip lashes it'd probably be complete!

Well done, the pair of you! You're such a cool mum to join Danny.
We're so lucky with our healthcare system. I'm with you, Googling symptoms is not a good thing.
Love the acrylic jumper! x

Very impressed by the storm-spotting and hot-cross buns. Also impressed by the 'wildman' outfit---maybe the only brand that could beat it would be 'wildwoman.' Although my favorite old brand I've seen at the thrift store is 'Hot Line,' complete with a little rotary phone logo. Your jewelry selection is, as always, amazing.

love your sweater and bag!!!

I hadn't realised you'd be doing the storm spotting for the community, I'd assumed it was just out of academic interest. It must be really handy having so many people around the state watching for extreme weather.

We're so lucky with our healthcare system. Bits of it are pretty poor (eg mental health services), but it's there and it's free.

Totally admiring the storm spotter training, the hot-cross buns and those corn shaped dishes!, they look really Amazing, we have not these things in my neck of the woods ;DDD
Love your 70's sweater, the shape is fabulous, I totally agree that a cotton tunic in a similar shape would be fab too!
The polka dot dress is a lovely piece, I like the sheer fabric (despite having to wear an underlayer) and the pleats and purple polka dots!
You rock those shorts! looking particularly cool with the silver wedges!. Love the birds print (don't they look like flamingos?). Really gorgeous!
besos

Storm spotter training is certainly a novel "family activity"! Congratulations on getting your radio license -- something on my own bucket list.

@Beate
Sometimes I forget just how connected weather can be in seemingly far away places. It is overwhelmingly sad.

@Ann
I suppose it is for the best-I'm afraid of doctors anyway ;)

@Vix
I'm sure as soon as he can drive, Danny won't want anything to do with me! That's typical, but not sure I'm ready for it. He's off to a summer programme at the University of Nebraska this summer and as I homeschooled him, never had the experience of dropping him at the school gate on the first day and falling apart. I'm sure I will lose my shit when I drop him off this summer :)

@Mrs. Rat
Thank you. It was an interesting class, and if I can provide valuable information to the weather service, I'm happy to do it. The tornado that hit us in 2008 was called in by a storm spotter as it didn't show on radar. Our small town was hit hard, but the sirens went off in time and no one was killed. It only seems fair to prepare to do the same for someone else.

@Mim
Yep. Having eyes on the ground is helpful to the weather service as radar can't detect everything. It is literally calling in a report-basic, but gets the job done. As so many government agencies are having funding cut, the more help they can get, the better.

Medical debt is a common reason for bankruptcy in the US. As healthcare is tied to jobs, many people with terminal illnesses are stuck literally working until the dsay they die. It is horriblke.

@Senora Allnut
I wonder if it is an American thing to have food-specific dishes? I also have a pineapple shaped plate, an avocado bowl, and a cheese plate shaped like a wedge of cheese...oh, and a sour cream dish shaped like a baked potato!

@Beth
I don't have my license yet. I studied, but need to take the exam. Now I am ready to finally finish it next time they have the test locally. In the meantime, we just call the local weather service with reports (I never thought I would have the weather service on speed dial, but life takes us interesting places).

I much prefer a platform or wedge to stilettos!